Proper Etiquette at a Buck Scrape

Well, it's been awhile since I've posted anything.  Life, unfortunately, intervened.  About a month ago, a nasty case of the flu kept me bed-ridden for three straight days (and left me with after-effects that I felt for two weeks).  Just three days put me woefully behind at work.

So the blog had to wait.


However, yesterday as I wandered the woods and grassland behind the house, I saw numerous buck scrapes.  This reminded me: 'tis the season for the rut!  I'm not a hunter, but the rut is still an exciting time of the year.  Knowing the males are out there attempting to strut their stuff...some in the prime of their lives, some too young to matter, and some too old to be a threat....is very cool from a behavioral standpoint!  Needless to say, I moved two cameras over some scrapes that appeared to be very active locations.

We'll see who comes knocking.  I just hope I didn't miss the main activity periods of bucks over their scrapes, as we're getting alittle late in October now.


In the meantime, I'll tease you with a great series of pictures I picked up last year in North Carolina during the period just before the rut.


Our story begins in mid September 2010 on an old logging road through the middle of a dry upland forest...a site dominanted by deer.


The first players are a pair of, what appear to be, subordinant males.  The male to our right in the picture below is standing directly over an existing scrape.  It's hard to tell if he's doing anything over the scrape....but I assume he might be. 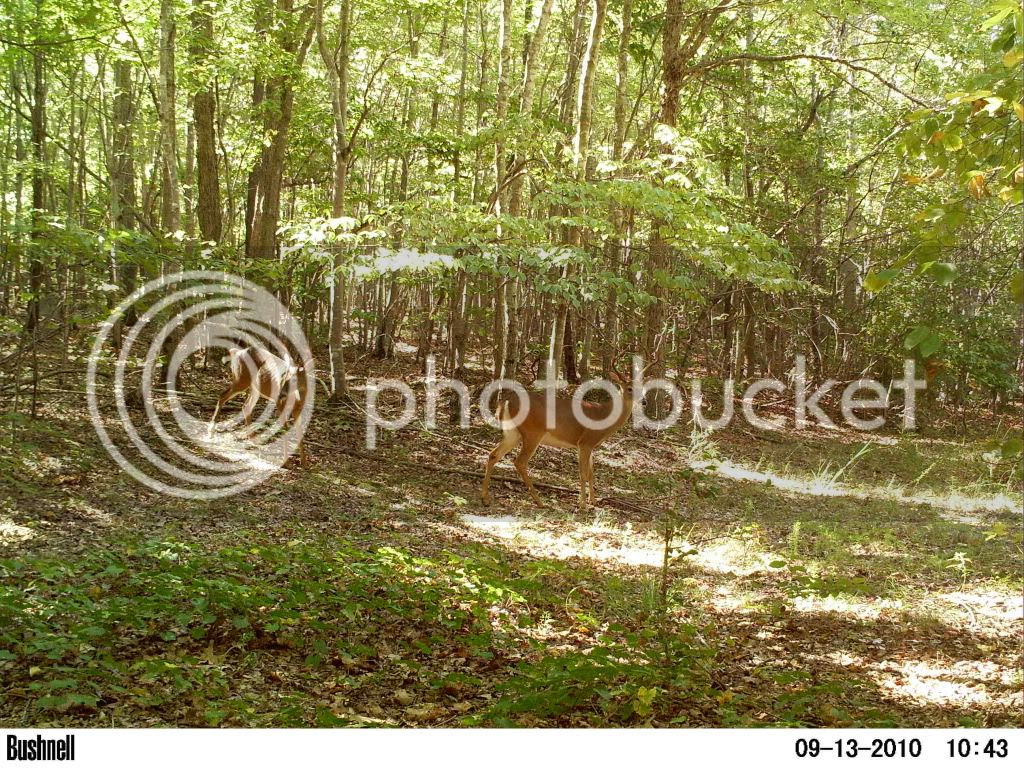 In no time, the two are moseying along the old logging trail.﻿ 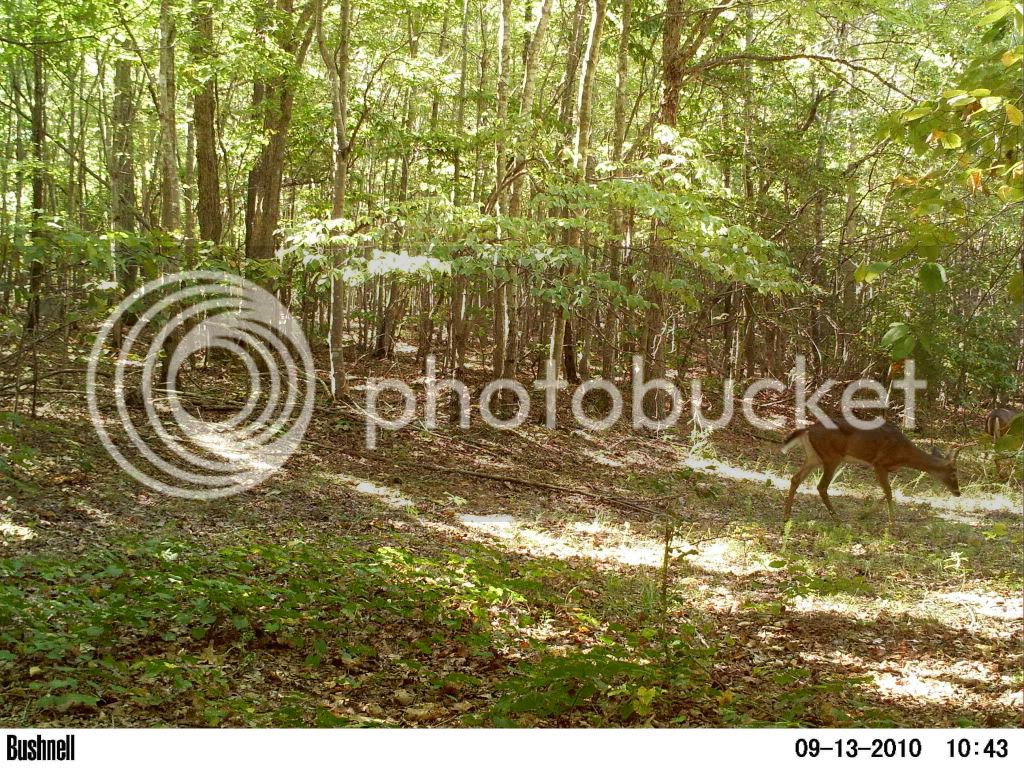 It doesn't take long (less than a minute) for the Big Dog in the area to come stalking up after these two smaller males.  He gives them a long hard look. 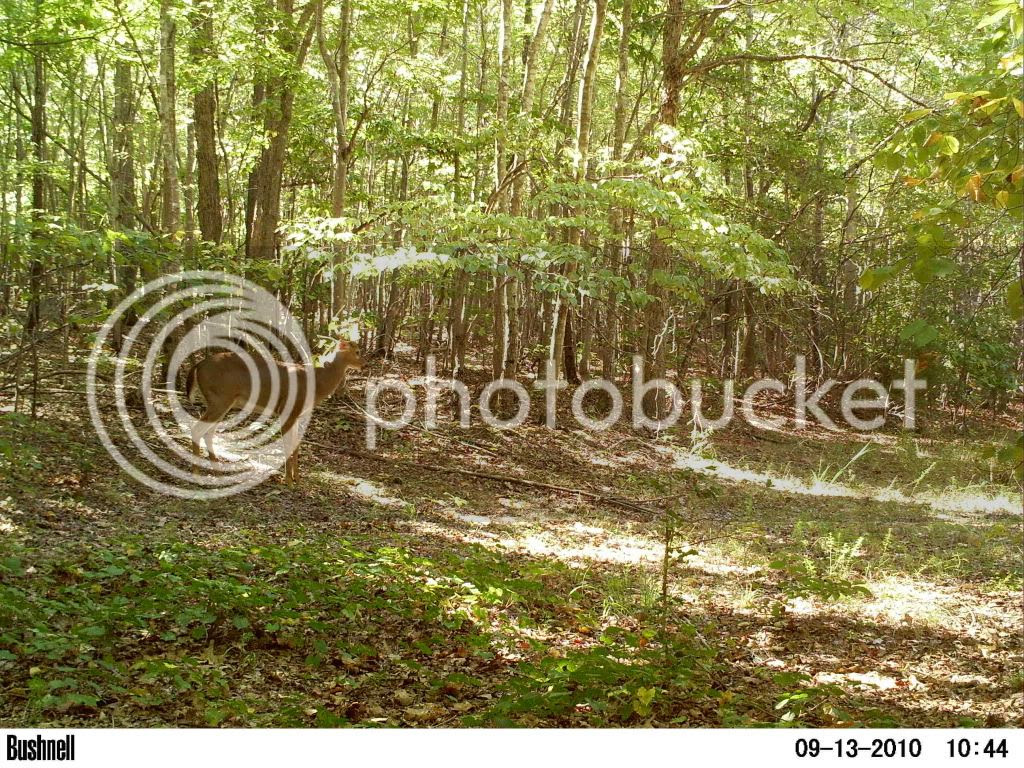 While watching the others meander on, the big male moves over his scrape and gets to work.  You can see the dust he's raising while kicking debris off of his scrape with his hooves.﻿  Also notice that he seems very interested in the little branch directly above his head. 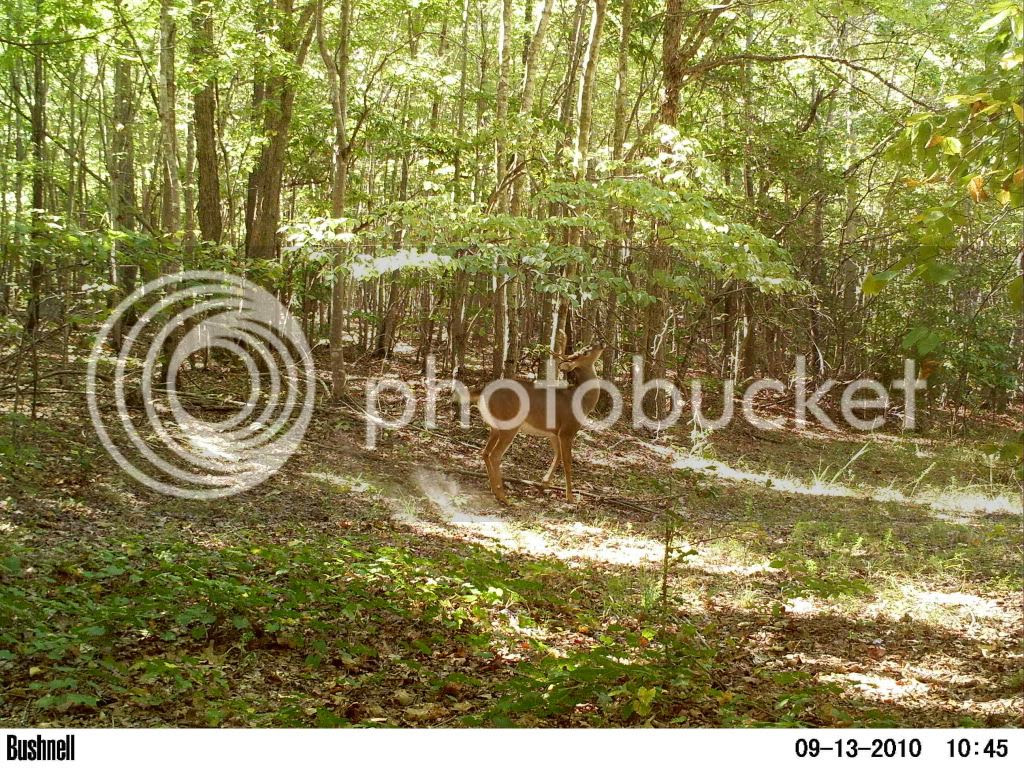 Finally, he finishes off his handiwork by depositing alittle more urine on the scrape (notice the wide stance with the back legs, a typical urination posture).﻿ 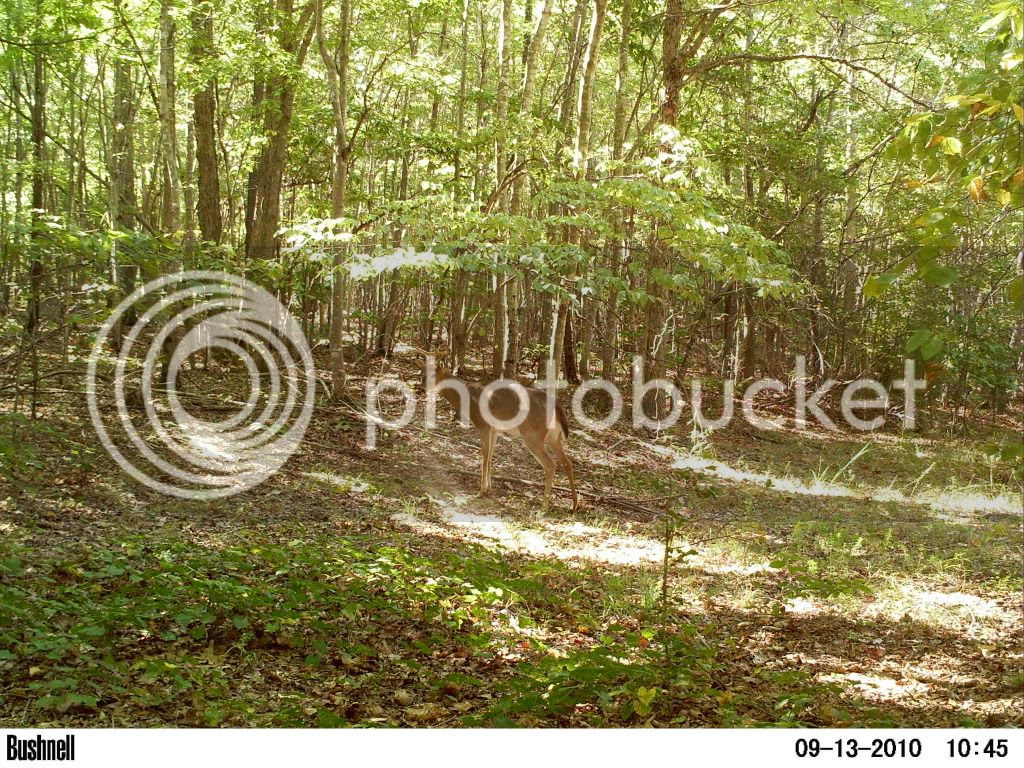 What is the rut?
The rut is the period of time when male white-tailed deer seek out females for breeding.  In the upper Midwest, the "rut" typically occurs from late October through early/mid November.  Typically they follow pheromones (scents) produced by female deer who are in estrous.


Why do bucks make "scrapes" in the woods?
Male white-tailed deer use a variety of methods to "mark" their territories prior to the breeding season.  They will rub their antlers on trees (depositing dominant male scent in the process), and they will make a "scrape" in the woods.  This scrape is usually an area selected by the buck to leave his mark and signal to other potential rival bucks in the area that this is his turf for chasing females, and also tells females of his presence.  The buck making the scrape will kick away the leaves from a patch of ground, exposing the dirt beneath.  The male will then urinate on the scrape, allowing the urine to flow over a tarsal gland on the legs (depositing pheromones which are meant to be a signal of his status).  Scrapes will be revisited by the creator to "freshen" them with new scent and to see if any other males or females have passed by.

Often times the scrape is located below a low-hanging tree limb or branch, where the male will rub his forehead, and lick/mouth the branch.  This is because white-tailed deer also have scent producing glands on their foreheads (called preorbital glands).  Between the preorbital glands and the scent in their saliva, they are depositing more cues of their status to other deer in the area.

Please excuse my ham-fisted attempts at photo editing, but here are two scrapes I found behind the house yesterday.  I've circled the scraped up dirt and the over-hanging branch for both of the scrapes. 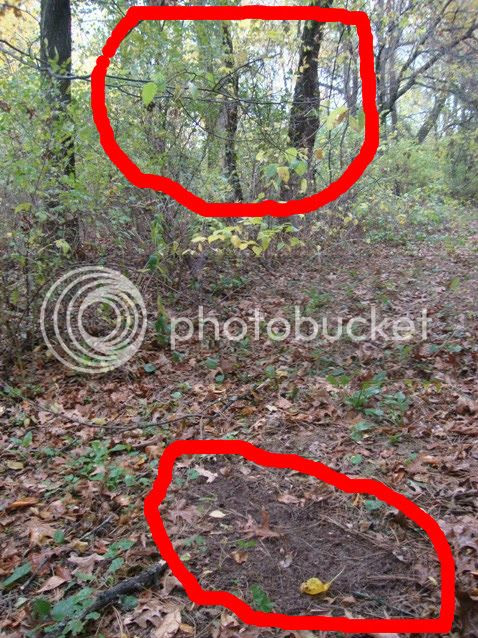 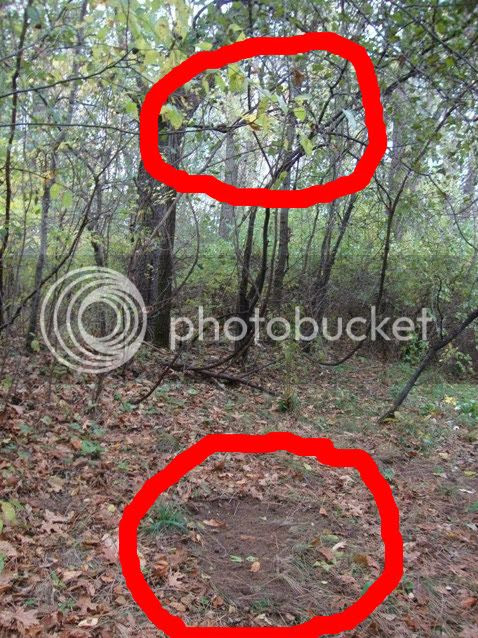 Creation of scrapes usually occurs most frequently just prior to the peak of the rutting season.  This is because the dominant male wants to make sure he's told the other suitors to take a hike and informed resident females that he's around BEFORE the rut starts.  Although, I suppose it's probably likely that some activity over scrapes occurs after the peak rut is underway.  Scrape activity is apparently instigated by the decreases hours of sunlight in the fall, which causes a change in hormones being produced.

If scrapes and rubs don't work, and there's still more than one male in the area hoping to get in on some action, it may result in direct male-male combat.  During these bouts, males will spar with their antlers to determine who is actually the big dog on the block.

Scrapes are not only created by mature bucks, however....and mature bucks do not prevent sub-dominant males from scraping (although their scent on scrapes may cause sub-dominant bucks to seek greener pastures).  Yet, less mature bucks will create scrapes near those of mature bucks and will even mark with urine on-top of the mature buck scrape.  Females will also visit already made scrapes and rub their forehead glands on over-hanging branches or urinate on the scrape.  This is presumeably to advertise their presence/receptivity to the resident males when they return to check their scrape.

Also, to identify a deer scrape (as opposed to turkey activity...seeing that turkeys will scrape back leaf litter to peck at bugs, etc. while feeding), look for the drag marks in the scrape left by the cloven hooves of the deer.....a branch hanging over the scrape is another clue that it's a deer, as is the time of year when the scrape was found (turkeys feed year round...but bucks *mostly* scrape in the fall).

For more general information on scrapes, see this article from Quality Deer Management magazine.  Becuase deer are a favored game species alot of research has been conducted on their ecology and behavior.  That's good news, even for people who don't hunt, but are interested in ecology.  I just wish all critters could garner the type of research attention and money that game species do!

Addendum:  after posting this, I started getting caught up on past posts I missed from the blogs I read, and noticed that JVN at Backyard Beasts also posted recently about scrape activity.  Check it out here!
Posted by Trailblazer at 11:16 AM 5 comments:

Typically, owls do not leap to mind when one thinks of carrion-feeding birds.  Mostly, we think of vultures, or crows, or ravens.

Because of this, I was relatively surprised to see these pictures...taken by one of my North Carolina camera traps about a year ago. 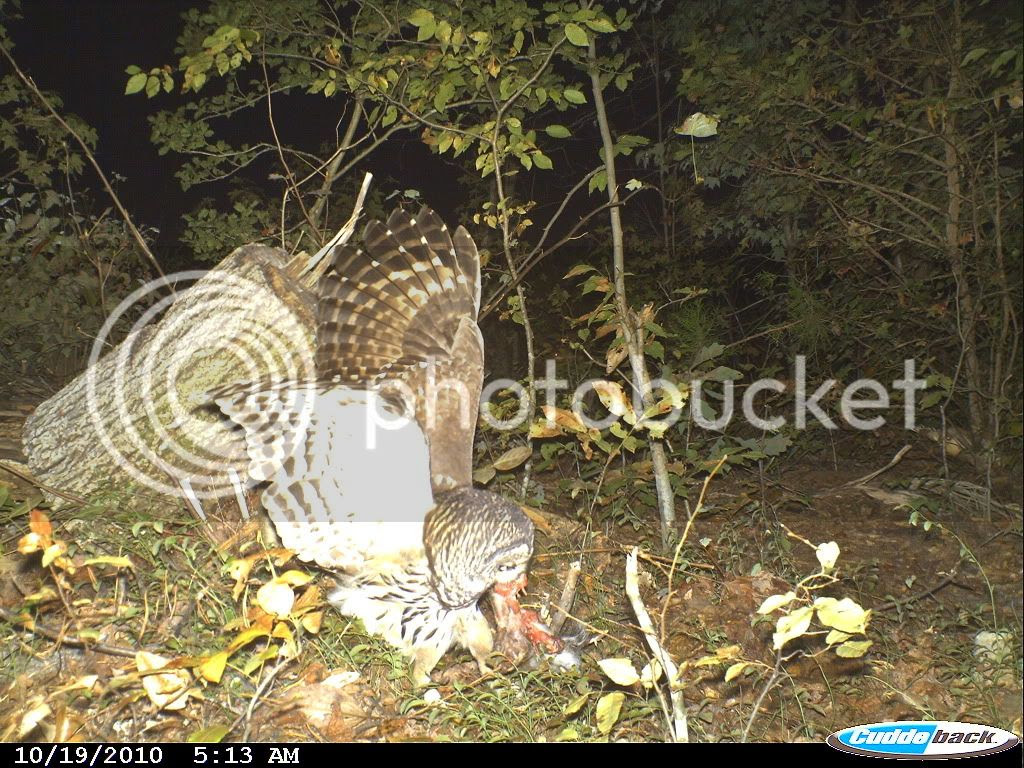 A colleague at the university had brought me a freshly dead road-killed squirrel.  He gave it to me thinking I'd turn it into a specimen (it was in good shape).  Although the thought crossed my mind, I didn't really have a good facility set up for dealing with skinning mammals and making specimens from them.  I decided the best use for this carcass was as an attractant in front of one of my cameras.

There is a tendency to just throw bait like this down in front of the camera and hope for the best.  However, raccoons were rampant at this site....and although this particular camera set was "high and dry"....and not along a stream corridor....I knew raccoons would find it all the same.

So, I wired the carcass to a wood stake, which I drove into the ground in front of the camera.

I also put a spray of coyote urine on the stump and a small dab of gland lure (including some good old essence of skunk) near the stake with the carcass.

I was hoping for Coyotes.

But I was not expecting the Barred Owl (Strix varia) that showed up and tore into the carcass. 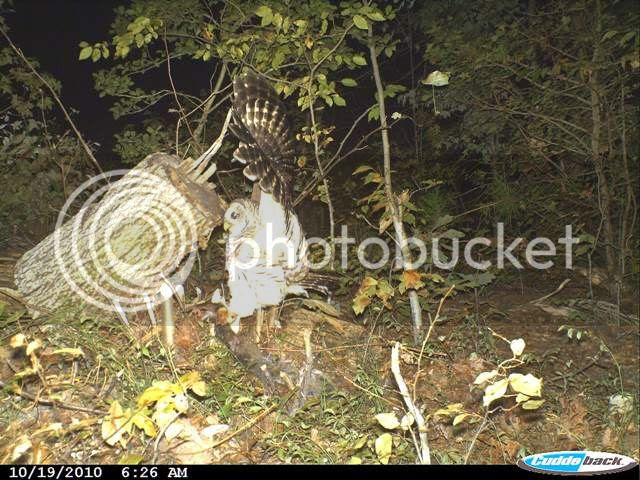 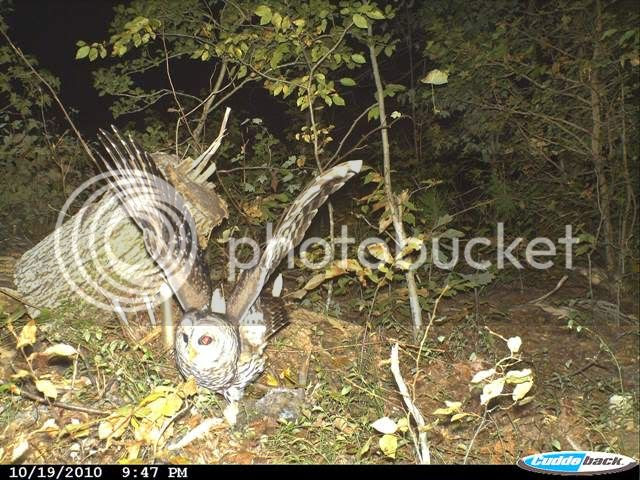 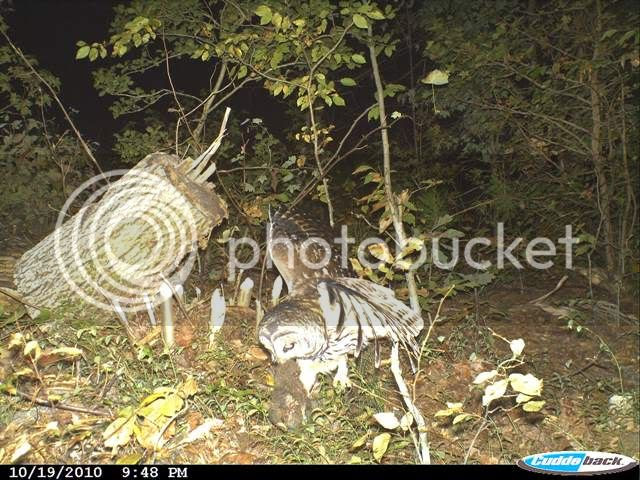 Later, I drug the ribs and spine of a roadkilled white-tailed deer to the site and got STILL MORE Barred Owl pictures! 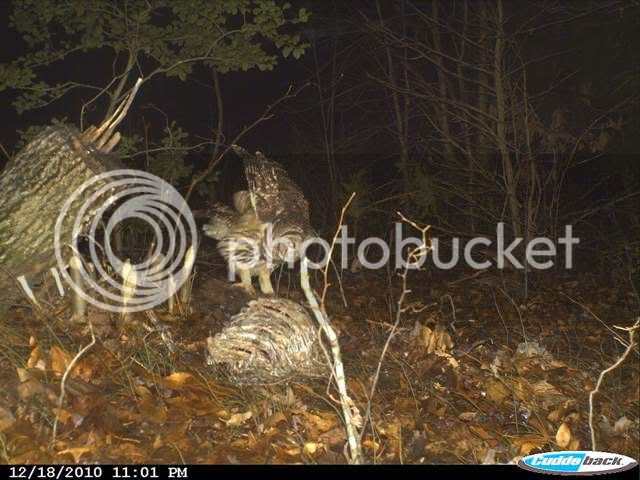 Substantiated reports of Owls (especially Barred Owls) eating carrion are uncommon in scientific literature.  Owls are known for to store food...so they aren't adverse to eating dead things.  However, finding a dead thing that YOU killed and hid yourself seems different than actively searching for something that's already dead.  Dead things don't exhibit the visual and auditory cues that I'd assume owls use when hunting.  So, perhaps carrion-feeding is purely opportunistic.

Many reports of owls injured along roadsides occur annually.  It is usually assumed these individuals are hunting along roadsides.  But....several anecdotal reports exist that mention Barred Owls on roadside carcasses (apparently) feeding.  I wonder how many owls injured on roadsides are actually scared when feeding on carrion and get whacked by a car when they try and flee.

Further Readings on Owls and Carrion Feeding, or Studies on Scavenging Rates:

Prosser, P. C. Nattrass, and C. Prosser. 2008. Rate of removal of bird carcasses in arable farmland by predators and scavengers. Ecotoxicology and Environmental Safety 71:601-608.
Posted by Trailblazer at 1:34 PM 5 comments: