I'm taking you all back in time a bit.  The subject of this post is based around a long-term exercise that started in Week 6 of our lab this semester.  Although we started this assessment back in February....student analyses of the results were not due until near the end of the semester.  The semester has since ended, and the early results are in.

To give you a bit more background...I wrote this lab exercise in mid-January.  It sounded fun and was something I had been wanting to do myself for a while, just had never had the time.  In general, the whole exercise seemed reasonable when I wrote it....but because I came up with it from scratch right before the beginning of the semester, it had never been tested and I had no idea if it would even work!

The goal of lab was to set up an experiment involving camera traps to test the responses of certain species to various urines, and perhaps getting an idea of how territorial they are.

The focus was our local canines: the Coyote (Canis latrans) and the Red Fox (Vulpes vulpes).

First, finding a location for each set-up is key.  The strongest smelling urine in the world wont work, if you (a) don't have critters on-site to respond and (b) don't pick a good location.  Despite what manufacturers of commercial trapper lures promote, a scent lure will rarely draw critters in from miles away.  It can, however, be used to coax a critter that's already in the vacinity into standing in front of your camera.

A maintained trail between a woodland edge and an agricultural field seemed to be a promising spot.... But even then....setting up the experiment takes alittle bit of explanation....... 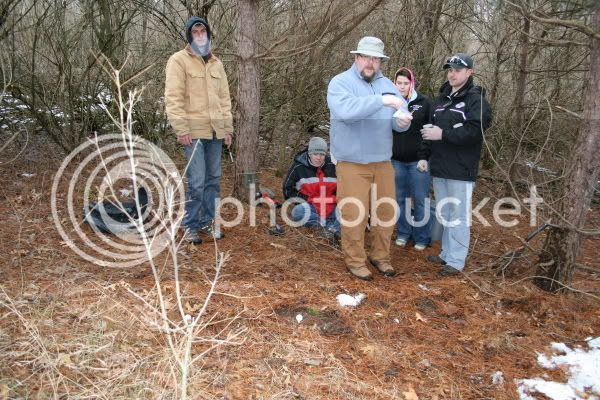 ...once the students got a feel for it, they sallied-forth to find their own locations and set up their own experimental camera sets. 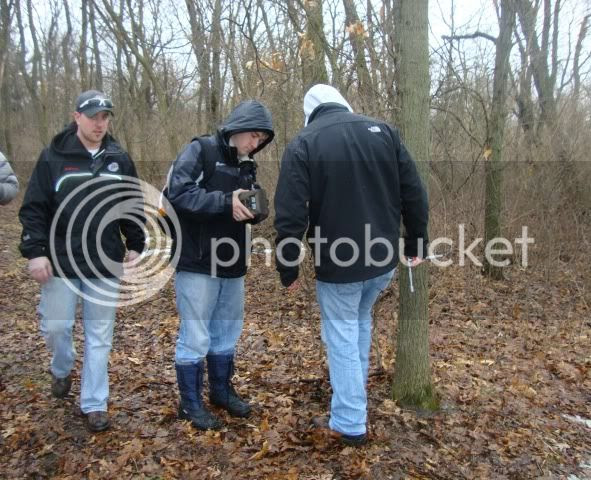 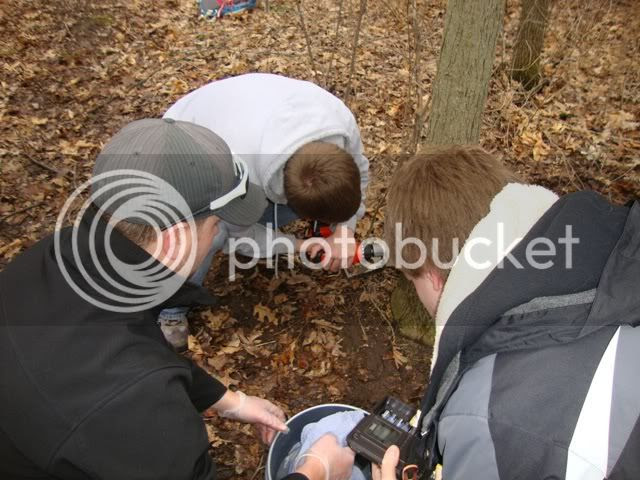 All cameras were programed to record video clips.  Much easier to see response of individuals in video clips than in still photos.

Eventually, it came to application of the experimental treatments. 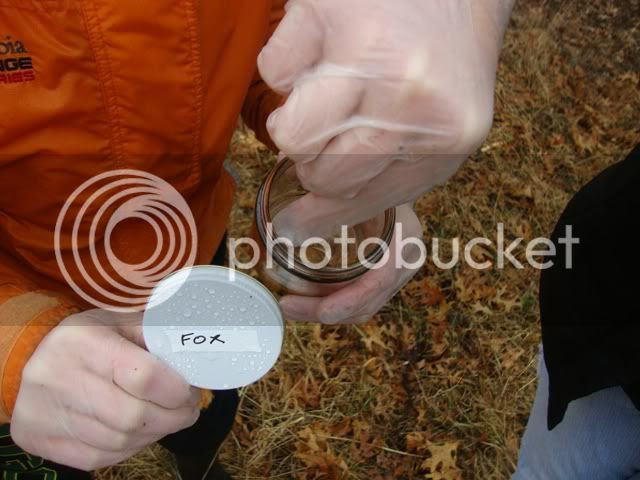 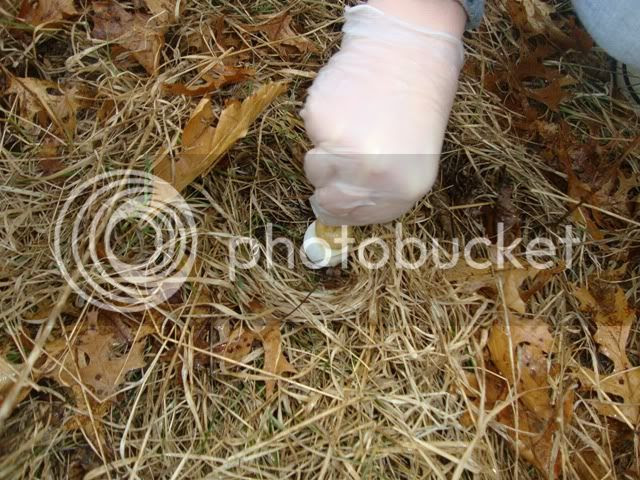 ...next a cotton ball was soaked in Coyote urine and placed in another scent egg.... 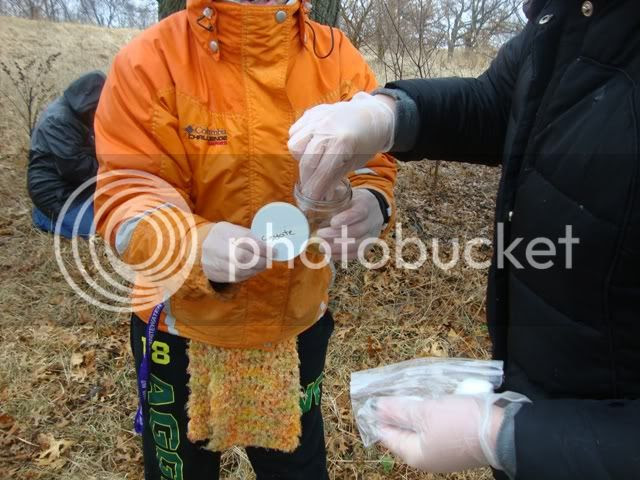 The urine scent eggs were placed 4 ft apart in front of the camera, with a control (cotton ball soaked with de-ionized water) placed in a scent egg exactly between them.  See what I mean in the two pictures below. 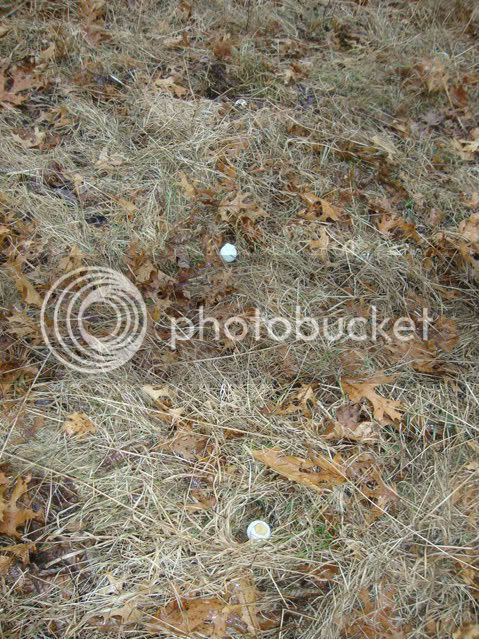 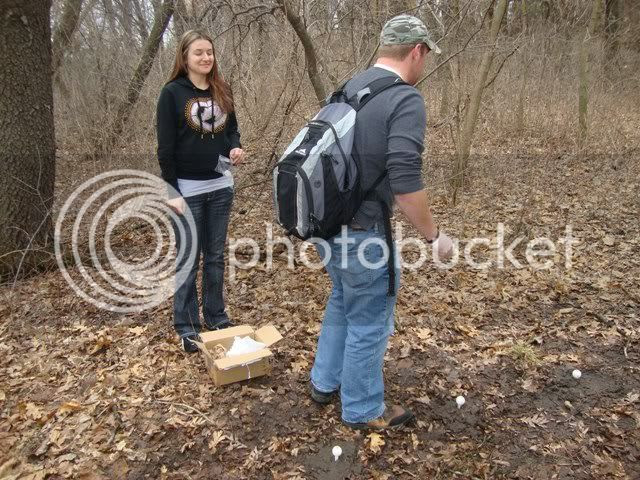 The set-up during lab went relatively well, and I was feeling good about our possibilities......which is always dangerous.﻿

But, my good feelings were soon to be dashed because two days after we set the project up, it looked like this outside. 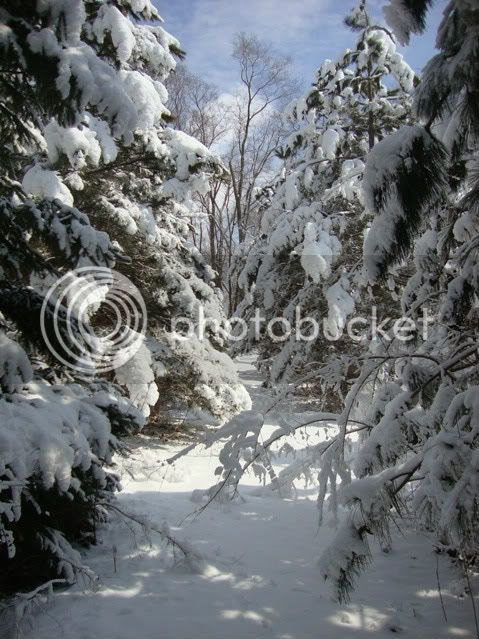 Then....it rained the night after we "freshened" the scent during the second week of the experiment.

Whether that made a difference or not, I can't say....but for six weeks the results rolled in.

Below are some of the highlights.

Also, remember that the wooden "scent eggs" holding the urine are not always visible (covered in grass, etc.) but they are within the camera's field-of-view.

We started data collection on this project in late February.

Basically, what we found was that some individuals were obviously interested......

March 2nd
April 5th (love the moon in the background)

Some individuals completely ignored our efforts.....

EVEN obvious prey of Coyotes and Red Fox seemed oblivious sometimes (also....I hate to be the bearer of bad news for you who put Coyote/Fox urine around your garden to scare away bunnies...but.....)


...and SOME individuals were absolutely no help in determining which scent was preferred at all!

Interestingly, we ended up getting almost no response from Coyotes and Red Fox.  One might assume this was because they were not on-site.  Our other camera traps (the ones without scent) proved this was not true (particularly for red fox).

Here are our best videos of canines responding.  We assumed the coyote in the second video was over the 'yote urine.  We got two others clips of canines, but neither were showing an obvious response to the scents.

April 2nd
April 8
Despite their lack of response on our urine cams.....we nabbed many pictures of red fox in other locations on-site.  Below are the dates where Red Fox were photographed by other cameras (non-urine cameras) on-site during our scent experiments:
During the experiment, Coyotes were photographed by one of our non-scent cameas only once: March 19.

This would suggest, perhaps, avoidance of the urine cameras, but I want more data.

I did have the students conduct statistical analyses on the data.  However, we had almost no response from Canines, so I had them combine the response of all wildlife to each urine and compare their combined response to fox vs. 'yote urine.  Basically, there was no difference detected.  However, this could be due to short survey period (only 6 weeks) and small camera sample size (n=4).  By just watching the critters in the videos, it really seems as if they were more often lingering on the fox urine.....but the stats don't back this up.

I have become interested enough in our findings so far that I'm continuing these experiments indefinately and rotating camera locations periodically.

We've been dealing with finals (and the like) 'round here.....so not much time for new blog posts lately.

However, wanted to relay a quick story to you all....

I went out and checked some of my research cameras yesterday morning.  It was very pleasant outside: low humidity and cool.  The wind was blowing with alittle strength from the north as I headed up the trail on the far south side of the property.  Disturbed woodland dominates this southern portion of the site and early successional woody vegetation is pretty thick on either side of the path.  The path also meanders a bit.....so it's pretty hard to see what's around the next bend, most of the time.

Twice I came upon eastern cottontails that shot off into the brush when they saw me....so I knew I was pretty well downwind of everything to my north with that breeze coming in.  Finally, I reached the edge of the woodland and the beginning of the old field/meadow in the northern portion of the site.  The breeze was a bit stronger here, as I made my way down the small incline along the trail and through the grass below.  I always try to keep my eyes open for turkeys, red-tailed hawks, etc. when I'm out in the open there, but saw none of the usual suspects.

Then I noticed something off to my right...about twenty yards away....bouncing in the breeze along a shrubby pocket that had grown up around a mature oak tree.  At first I though it was a bag caught on some bushes that the wind was blowing around.  As my eyes adjusted, however, I realized it was the bushy tail of an adult striped skunk (Mephitis mephitis).

It shuffled through the debris on the edge of the shrubs, stopping to occassionally investigate certain spots with more effort.  In general, it was so occupied with its work (and I was still downwind) that it didn't notice me.  Eventually, it moved on through the dew-covered grass and out in the open field....stopping occassionally to shake and send tiny droplets of dew flying everywhere.  Eventually, I lost it as it passed over a small rise in the landscape.

I moved forward and circled around the spot where I had last seen the skunk (not wanting to walk into his direct path, but also curious about where he was headed).  As I came up over the rise, I spotted him again, moving away from me....with only his tail up above the height of the grass.  He stopped intermittently to sniff at something in the ground, but eventually headed straight for a large den opening at the base of an old dying oak tree on-site.  This is a spot my advanced ecology students had deployed a camera on previously, and there has been all manner of critter hanging out nearby (see here for photos of the den prior to the skunk moving in, and here for pictures taken from the camera hung above the den opening).  I watched him give one final shake and then disappear into the root system.  That's the last I saw of him.

We had gotten lots of pictures of Skunks on-site during our class exercises in my ecology lab, so I knew they were around.  I was alittle surprised to see them out and active during the day (it was about 8:30 am at that time), but was glad for the opportunity to see him/her with my own eyes.

Interestingly, we had also gotten a video clip of a skunk (probably the same one) active in the daylight last week....


Some folks would see a skunk (or raccoon, or fox) out during the day and scream "RABIES!"  But, a skunk active during the day and doing exactly what skunks do (walking around with a purpose, looking through the underbrush for food and then entering a burrow), is probably not a reason for alarm.  In fact, a colleague of mine who is the furbearer biologist for the state of North Carolina once told me that she frequently gets calls from people incorrectly assuming that a furbearer active during the day means it's rabid.

Not true, she said.

It's their behavior that's important.  Wandering aimlessly, acting aggressive for no apparent reason, or just sitting in one place showing a total lack of concern for people it has seen....these are behaviors to worry about.  Note that I'm not hoping to give you hard-and-fast rules on how to tell if an animal is rabid.  That can only be definitively determined after a post-mortem analysis of the critter suspected to be rabid.

But....regardless....being able to watch a few intimate minutes in the life of a skunk was a treat.
Posted by Trailblazer at 7:27 AM 3 comments: