There appears to be a rather sizeable misunderstanding between these two young Raccoons.....


What's more, this misunderstanding still was not cleared up several days later....

Even momma looks beside herself on this next one (pacing around the wrestling juveniles)....

﻿Not all interactions appear to be such massive misunderstandings as the ones in the clips above.  Some actually just appear to be "play"-type behaviors.

The clips below starts off pretty benign, with a nice up-close shot of momma.  Yet, it ends with her two two scamps accidentally sucking her into their ruckus.

Your Weekly Fawn: A Late Arrival?

This fawn looks pretty small and/or young for this time of year.

Contrast this with another fawn at this same site almost a month ago...

Posted by Trailblazer at 7:03 AM No comments: 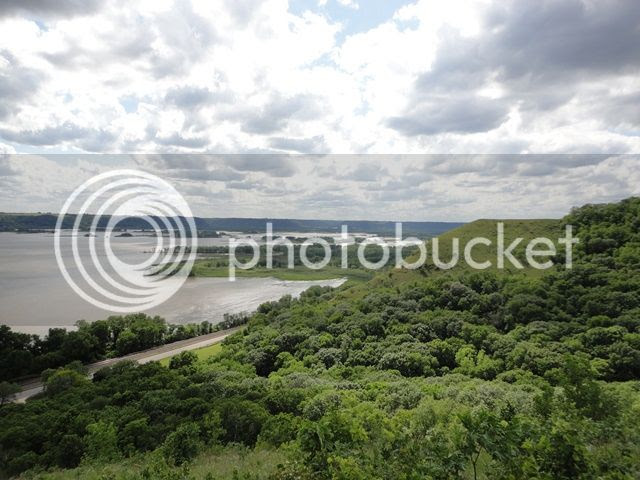 I'm finally going to share with you all the last big herping trip we took when Dave visited back in May (seems so long ago now!).  For more, see the previous posts about our trips to the bog and the prairie.

The driftless (or unglaciated) region of the upper Midwest is a unique area, with unique habitats and somewhat unique reptiles.  Unlike the rest of this region, which was scoured nearly flat by glaciers, the driftless area was spared.  The glaciers parted and moved around an area along the Mississippi River on both sides, and includes portions of Minnesota, Wiscsonsin, Iowa and Illinois.

Due to the lack of recent glacial activity, there is a large topographic relief in this region and deeply carved river valleys and associated hillsides are common.  Such relief gives the driftless area an appearance that is about as close to mountains as one gets in the Upper Midwestern USA. 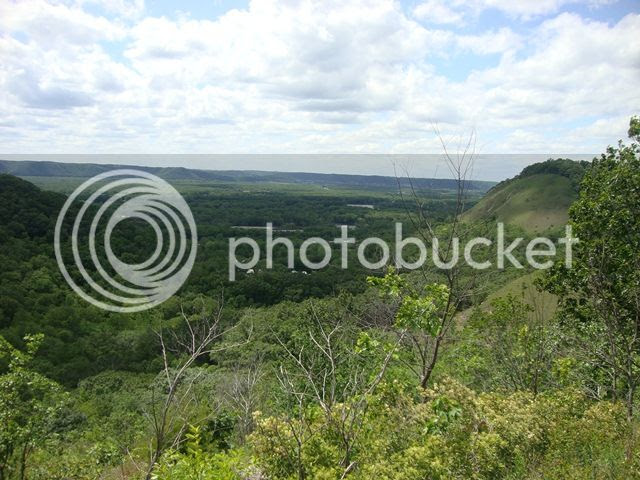 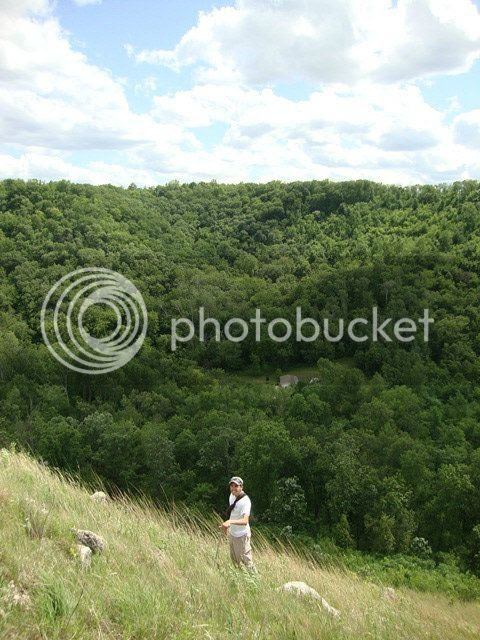 Of course, these are not mountains...but what are called "bluffs".  Regardless, for a flat-lander like myself, hiking in this part of the state involves some pretty serious climbing.  But if you want to see one of the coolest snake species in the region, then climb you must!  Often this requires a schlep of 500 ft or more up a serious incline to get into the preferred habitat for the species in-question.  Now, if I was one of these people that were....how would you say?.....IN SHAPE.....this would be no problem.

But, reality (and gravity, if one slips on the hillside) are a real pain in the neck! 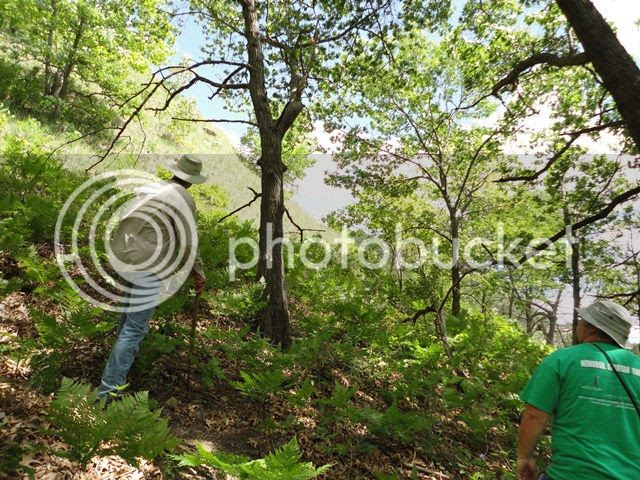 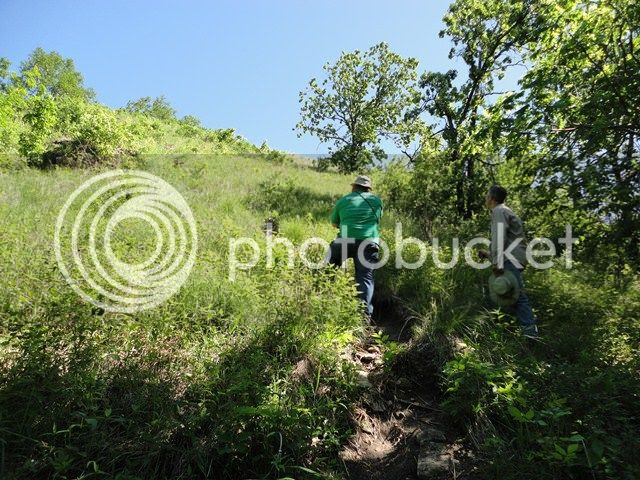 Once you're up there, though, the view is very nice (see pics above).  However, at this elevation a new challenge presents itself: looking for a cryptic venomous snake while walking along an ankle wrenching slope with loose/rocky soil underfoot.  Clearly, many things could go wrong, so care must be excersized! 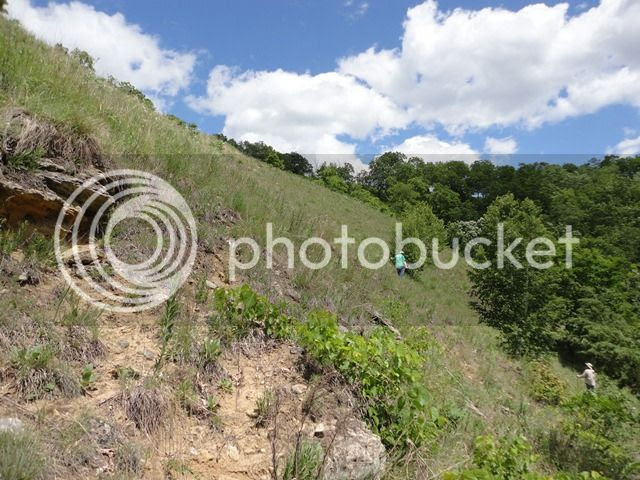 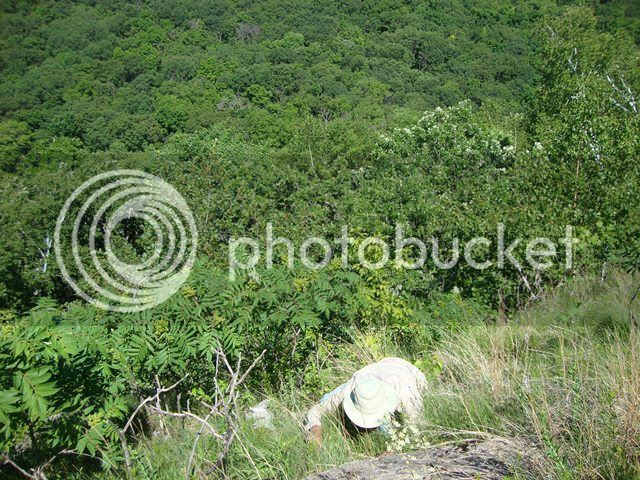 There is the potential for a variety of rare and common species in this habitat.  For example: 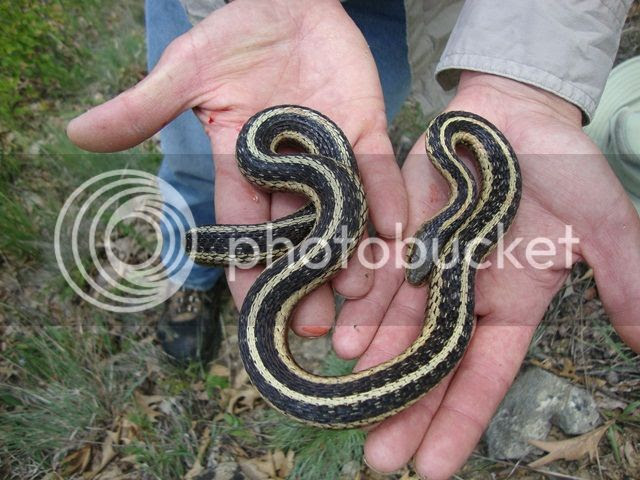 A gravid female Six-lined Racerunner (Aspidoscelis sexlineatus)...note the lumpy sides, which is probably due to her eggs. 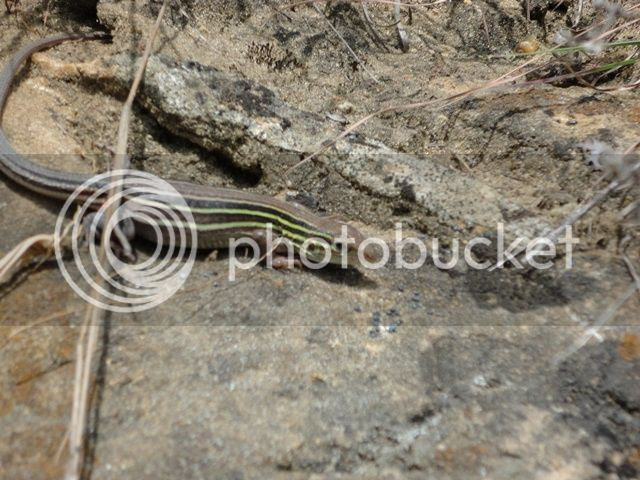 If you're lucky, however, you just might get to see the critter of the hour: Crotalus horridus (the Timber Rattlesnake). 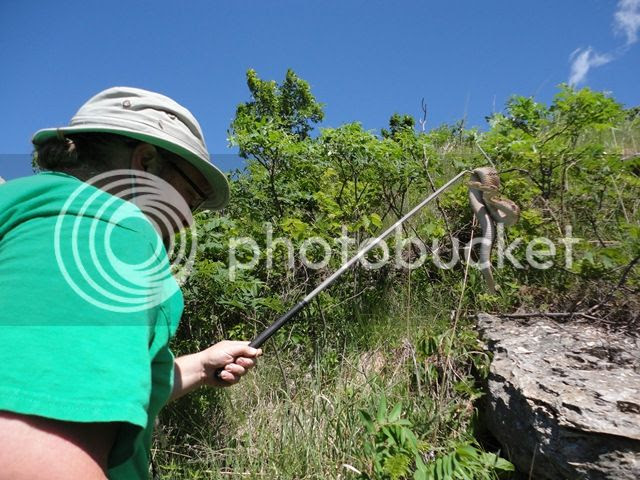 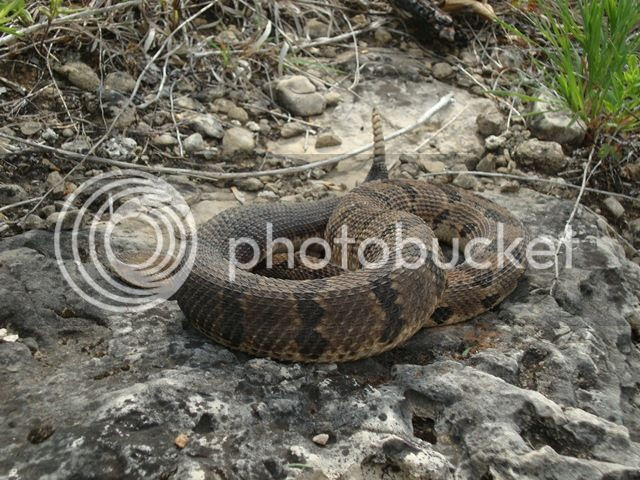 Sometimes, these critters sit out in the open.  As sit-and-wait, or ambush, predators...they rely on remaining still and unseen to surprise their prey (a small rodent, for example).  They employ this tactic to avoid being spotted by humans as well and finding them may require probing around in the grass with a snake hook hoping they will rattle (mostly to avoid stepping on them!).

Although they can be found out in the open, often Timber Rattlesnakes hide in rock crevices that require alittle digging. 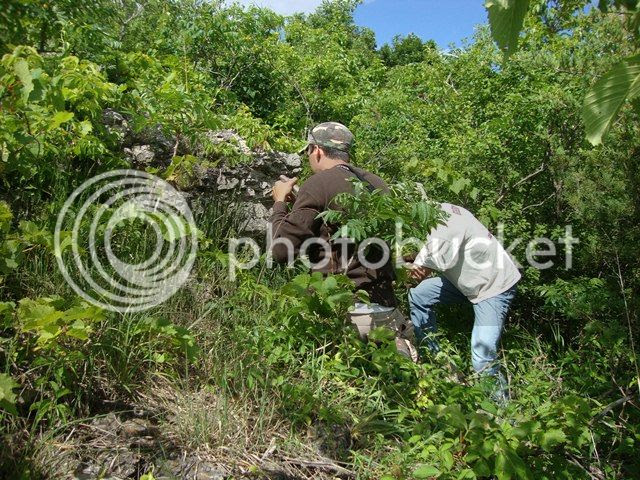 Some individuals really don't want to be found.... 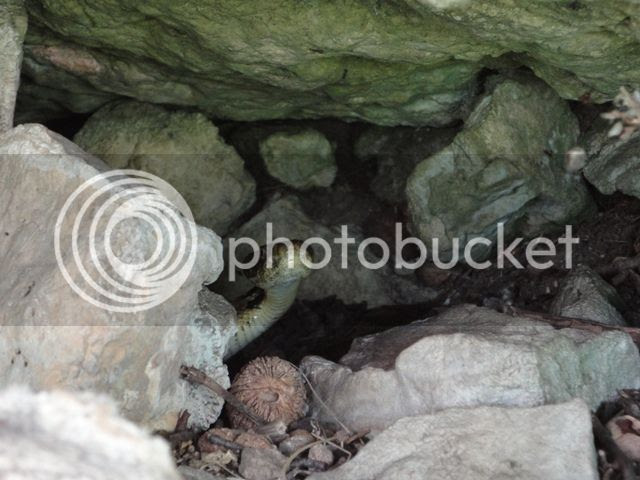 But, if you can coax them out (a dicey process), they are truly a marvelous critter.  My pictures don't do them justice. 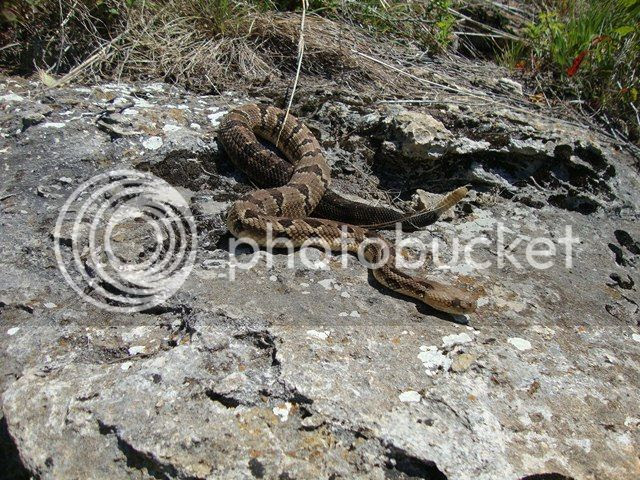 Throughout human history, snakes have been treated harshly by we upright-walking apes.  Rattlesnakes (and any venomous species) feel the effects of this disdain to an even greater degree.  Thus, Rattlesnakes throughout the upper Midwest are very rare and often Protected under individual state regulatory statutes/laws.

For more info, see this entry from a neighboring blog Salameandering.
Posted by Trailblazer at 5:18 PM No comments:

This year's offspring are growing.

First, one of the many fawns active at my research sites...... 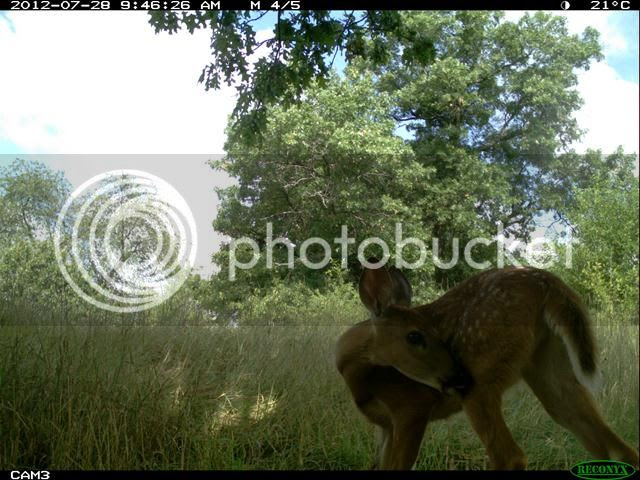 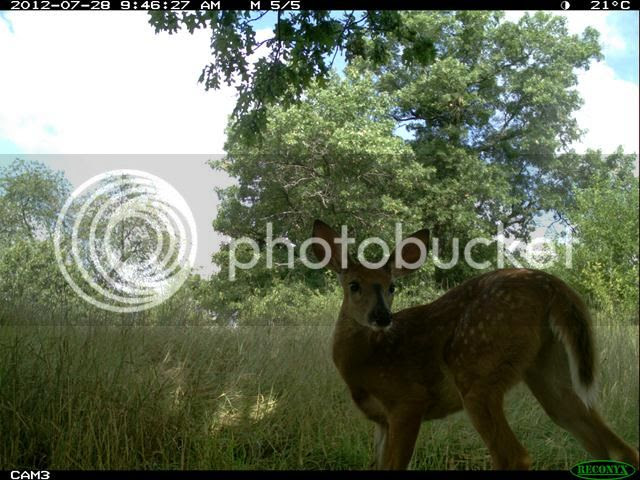 Then, a first for me this year, a picture of a momma walkin' bird with poults.... 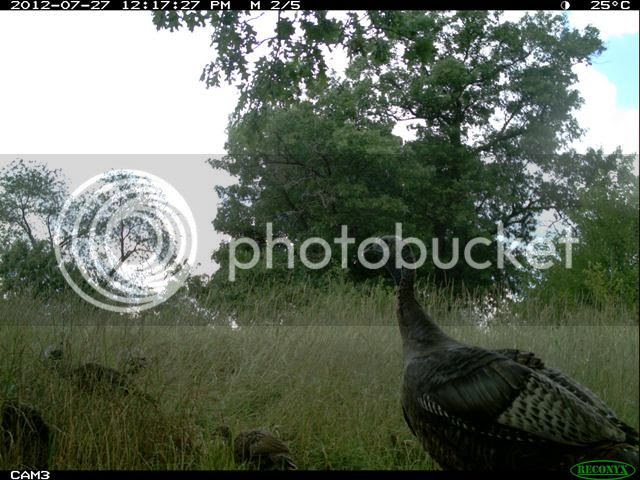 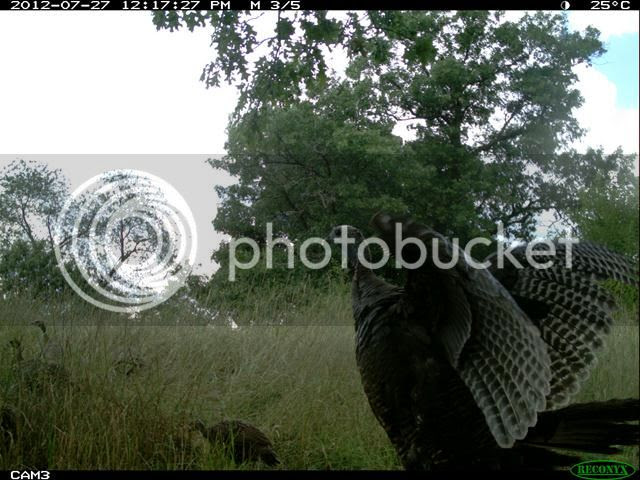 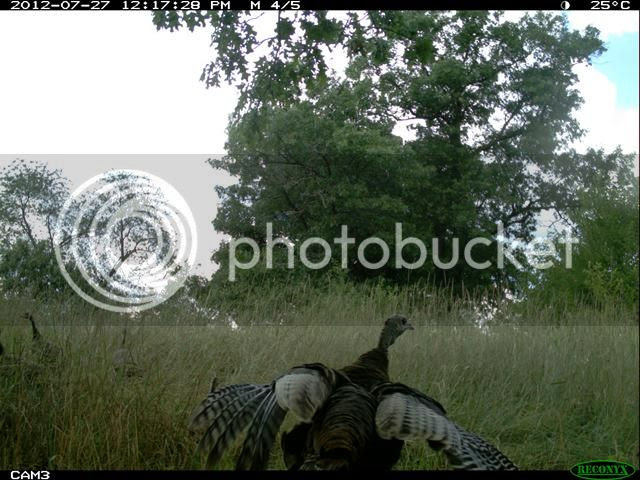 And...of course....Raccoons.  I know I post alot of clips of Raccoons, but they provide so much entertainment (especially for video footage).  They never sit still, engage in interesting behavior, and are super abundant!

Below, a momma with five juveniles at a completely different site than the one I have posted on before (see here, and here).

....sometimes the youngsters play alittle too rough with momma.....

Posted by Trailblazer at 8:34 PM 3 comments:

Tensions are high among some of the Raccoon siblings, it seems.

Occasionally, these tensions flare up into a full blown altercation!

The funniest part is that every time one appears to be ready to walk away, the other pulls him or her back into the fray.

I have no idea what's going on with the demented behavior of this Fox Squirrel (Sciurus niger).  Obviously, its trying to get at something....but what could be so absolutely essential to your survival that you'd act like this to get it?

Can someone please explain?


Catching bizarre or unique behaviors like this is one of my favorite things about camera trapping!﻿
Posted by Trailblazer at 6:10 PM 2 comments:

The biting flies have been horrendous at several of my study sites this year.  I'm typically mobbed by them every time I go out to check on my camera traps.

You may imagine that if it's bad for us, it must be worse for resident wildlife that can't just jump in a vehicle to escape the swarms.

It should come as no surprise that they about loose their minds trying to keep these swarms at bay.

So...this is obviously a nuisance for these critters.

Now, imagine how it must impede their ability to sense danger.

Below is a video clip of a fawn at night....when the flies aren't as bad.  He or She is able to be on the alert for danger...ears swivelling....head up....always devoting attention to the search for potential threats.

Now, take a look at a fawn (perhaps the same fawn) at this site during the day.  Note that almost no time is spent scanning for predators, etc., as the flies are taking up most of of the fawn's energy and attention.