Nothing super exciting for now.  Have some cameras out behind the house that I haven't been able to check in over a week due to the holidays.  Also have some cams out as part of another student exercise....the labors (and fruits) of which I'll share soon, I hope.  I was disappointed to see illegal hunting activity on the site we were working with students (brand new deer stand smack-dab in the middle of the property).  Luckily everyone had their orange vests on (and luckily no one was in the stand).  Now I just hope they don't mess with the cameras, as I can't imagine they didn't come back to the property to hunt over the Thanksgiving weekend.  I informed the property owner, but they were gone for the weekend and not much can be done but for me to sweat it out.  All the cams are in full security lock-down mode, but I've already shared with you all how unreliable even THAT can be (see here, here and here)!
________________________________________________________________________

But...for now.....let me take you back east to the fine state of North Carolina.

Dave has been checking some of our remaining cams (those that weren't on sites where thievery occurred).  He sent some pics last week and several of them were rather pretty or interesting.  Nothing fancy (just deer....hundreds and hundreds of photos of deer)....but some sort of neat shots among them. 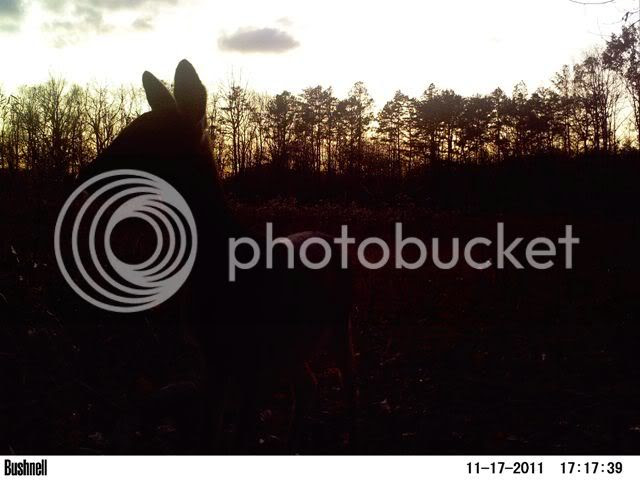 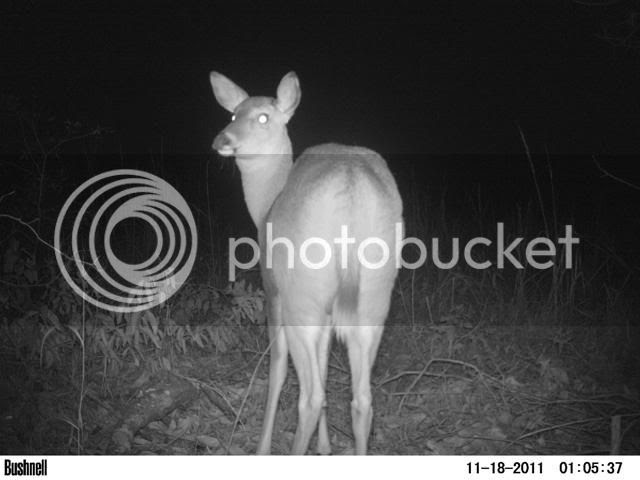 The pic below turns out so nice due to the heavy frost that hit the area.  This is heavier than any frost we've gotten in the upper Midwest! 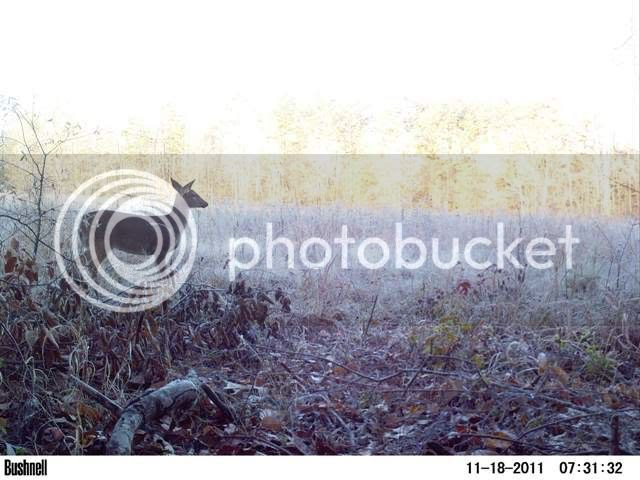 I quite like the one below.  Not only do the woods in autumn look nice, but the buck is posed well, and the steam rising off of the stream to the right really looks cool.... 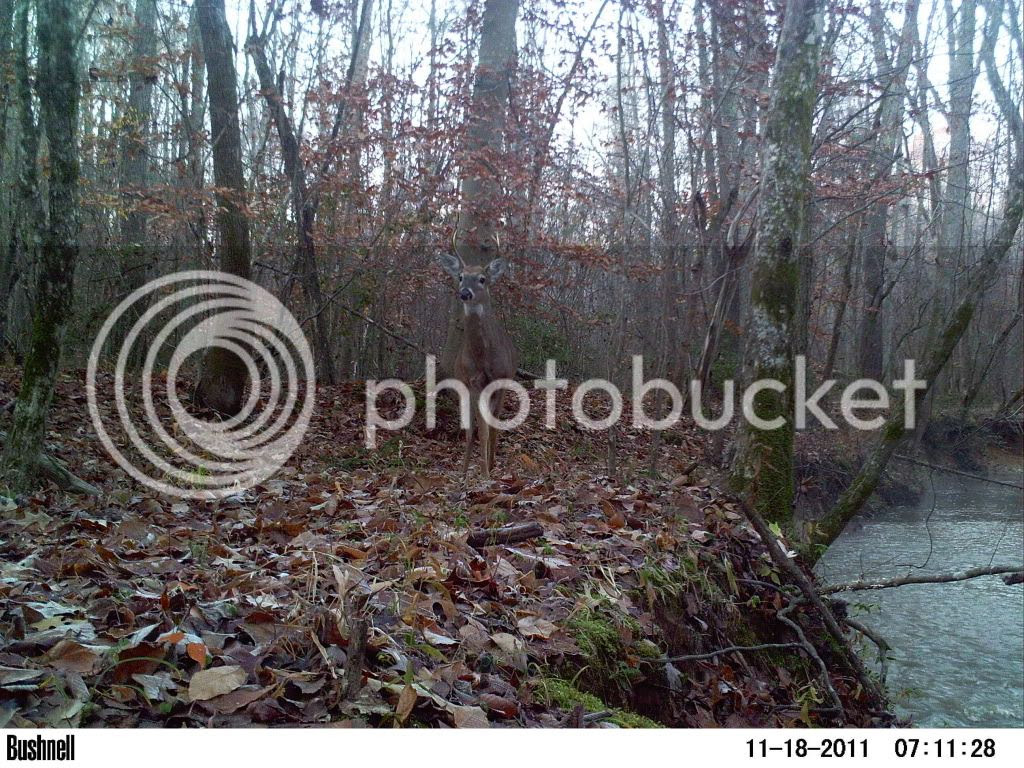 Posted by Trailblazer at 7:40 PM 3 comments:

The Brute and The Broke-Horn

Well...been alittle while.  Busy, busy with the new job.

However, you may remember I had moved a few cameras over buck scrapes.  I was alittle late in the season for a lot of activity at a scrape, but I had hoped for the best.  I did get a few individuals that came by and checked the scrapes out in the week that I had the cameras over them...but the angle was bad.  Thus, I didn't get the perfect picture of a buck scraping and rubbing an overhead branch.

This doesn't mean that there hasn't been stuff going on.  The rut must be underway and I've finally seen the Brute hanging around after no sign of him for a coupla months.  He's been all over and I've gotten him in two locations on-site.

First, a little Red Fox (Vulpes vulpes) stops by.  The pic is washed out becuase he was so close the camera.  Introduced or not....I can't help but smile when I get pics of these little canines.... 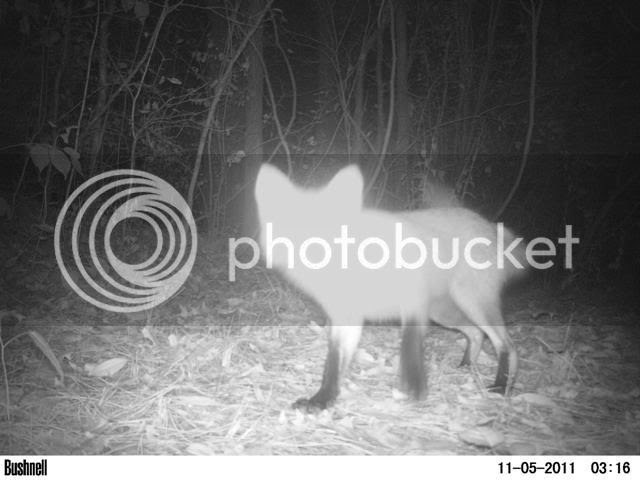 ...and here he is (or at least here's a Red Fox) near the other scrape I was hoping for some activity at.... 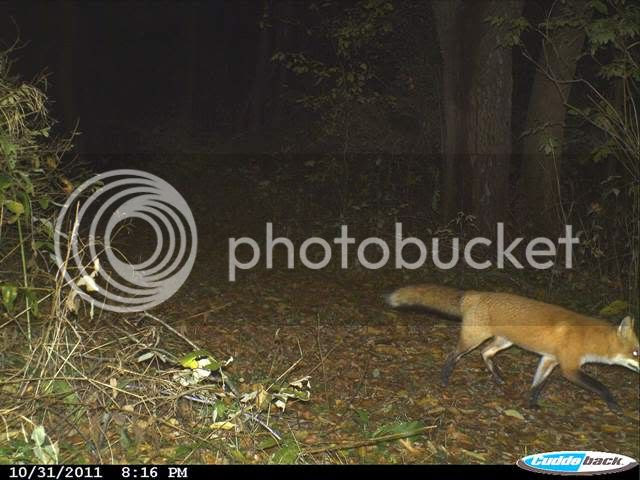 Below...the brute shows up sniffing around the buck scrapes I was monitoring.... 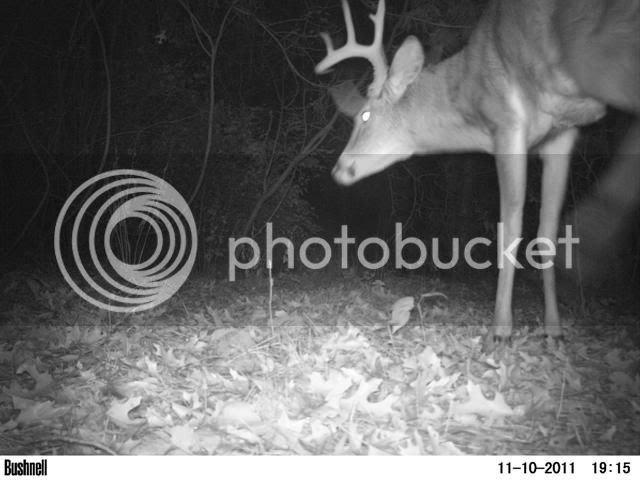 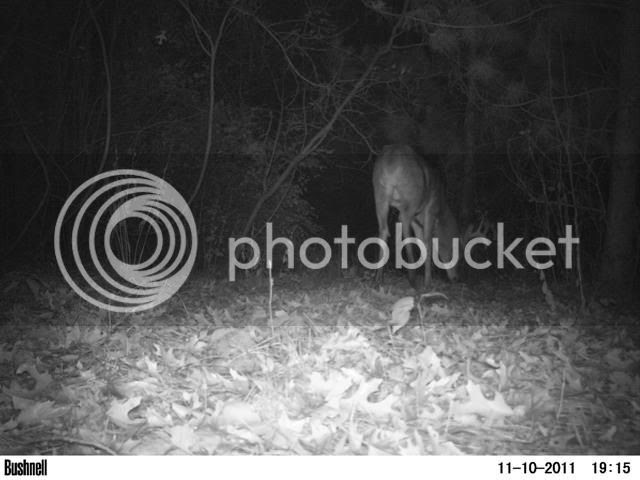 Below is a completely new location I started monitoring two weeks ago.  A woodland path.  Lots of deer activity.  Also a Coyote (Canis latrans).  His coat appears to be thickening nicely in preparation for winter.... 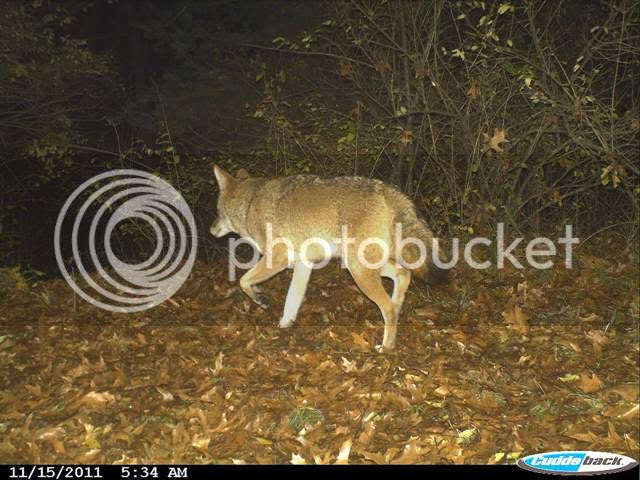 This picture of a doe is the one that got me to thinking the rut must be in full swing here.  Her hide looks to be alittle roughed up at the back end.  Perhaps it's from brush she's pushed through, but I wonder if this isn't due to the advances of resident males....... 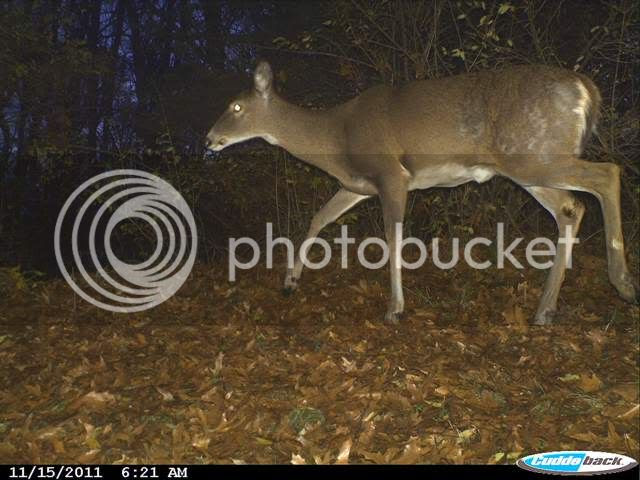 The "broke-horn" (more correctly, the "broke-antler") male also passes by here.  Not sure if he lost his right antler in a bout of some kind (perhaps with the Brute?)...or if perhaps this is a developmental abnormality. 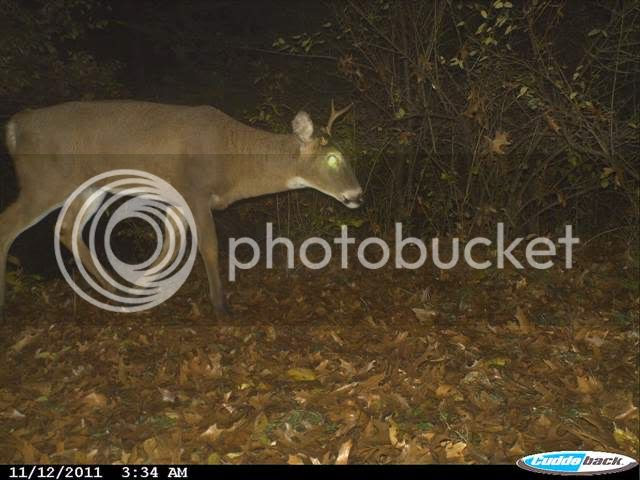 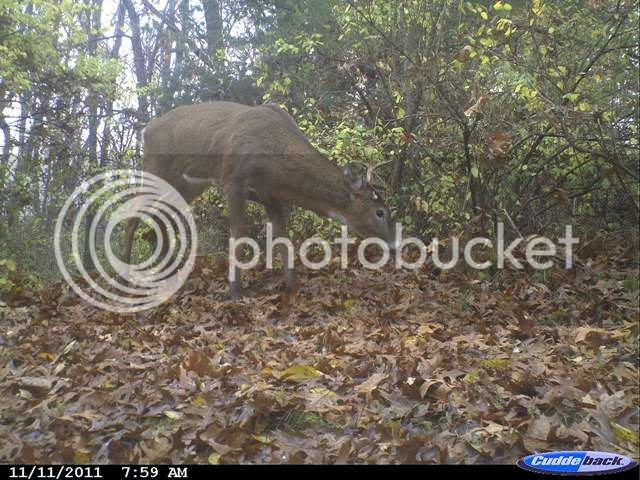 But the Brute is clearly the "Big Deer on Campus".  Here is a picture of his backside.  Head high, tail up...  In this picture, I imagine him chasing a female or investigating a rival male that must be ousted.... 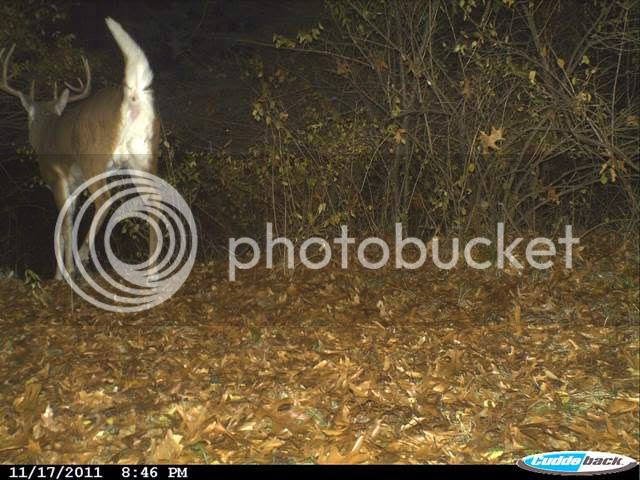 ...and again this morning, not long before the dog, the kid and I came up to the camera..... 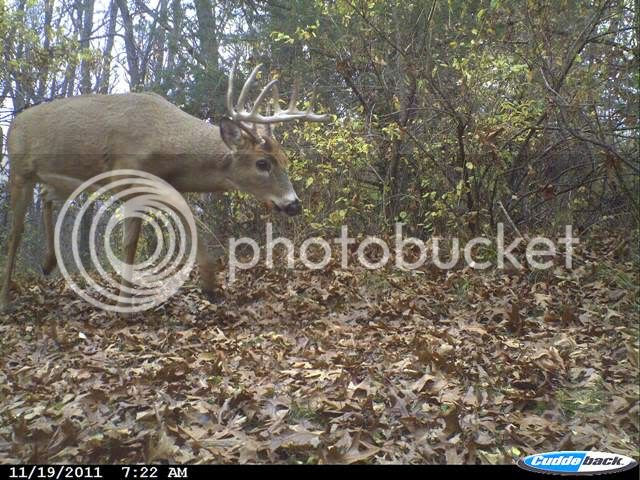 Lots of deer activity out behind the house.  Very interesting because we have a relatively small woodland fragment....surrounded by a sea of agriculture and occasional wooded strips along riparian corridors or between rural houses within a five mile radius.  I guess this little fragment is about the best thing around and the critters congregate here.  It would be interesting to compare species diversity within fragments of different sizes on the landscape to see if they support MacArther and Wilson's theory of Island Biogeography.

If only there was unlimited time and money....... 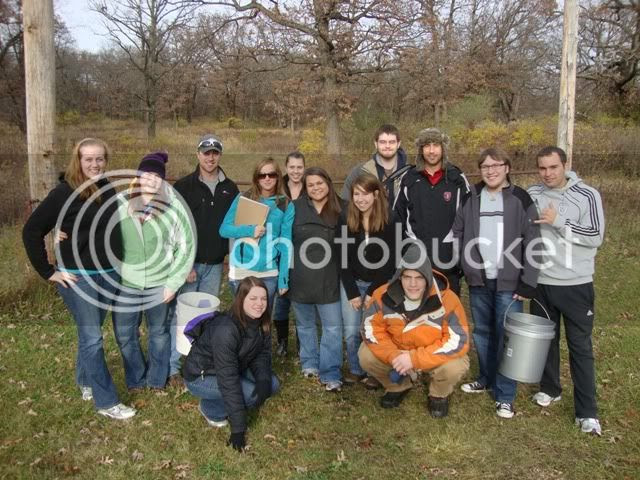 Above: advanced Ecology students, fall 2011, prepared to go out and check their camera traps!
Traditional methods used to estimate wildlife abundance/population size typically involve some sort of capture/mark/recapture technique.  In other words, you go out one day....catch a bunch of animals in traps...give them a unique mark (i.e. an ear tag, etc.)....release them and then on day two see how many marked animals from the previous day that you recapture.  The calculation involves a comparison of the ratio of marked to unmarked animals caught during the two days, and this allows you to estimate the population size.
With camera traps, these traditional capture/mark/recapture methods can be difficult to use.  Some species allow researchers to identify individuals via unique natural marks/patterns (ocelots, jaguars, tigers, etc.).  Identification of individuals via natural markings is alittle more tricky with the critters in the upper Midwest.  Most raccoons and white-tailed deer are hard to distinguish from one another.  If, for example, you obtain three pictures of coyotes over three days (1 coyote during each day), it's pretty hard to tell if this is the same individual on three occasions...or three different individuals.  Of course, one could trap them and put ear tags on them, etc...but to do this creates a laundry-list of other issues (not the least of which being acquisition of proper permits).
There is, however, a model that allows for researchers to estimate animal abundance with capture-only data (i.e. no recapture data of marked individuals).  It's called the Royle-Nichols Model (Royle & Nichols, 2003), and is perfect for analyzing the type of data frequently generated by camera traps (i.e., pictures where it can be difficult to tell individuals apart over time).  This model assumes that the probability of capturing an animal is a function of how abundant that animal is on-site.  In other words, an animal that is captured frequently by camera traps probably has a high abundance, and the model can calculate this abundance for you.
So between learning the application of this abundance-estimate model and getting to work with camera traps in the field.....the field ecology students involved in this exercise are gaining some great applied skills.
So it was that our advanced ecology students found themselves wandering through the woods at large woodland restoration site about 1/2 hr from campus.
Note: ignore the date and time stamps on the pics below.  I'm not sure if these are programming issues or malfunctions, but we obviously were not out there in January of 2009!
____________________________________________________________________
The students and I started off by deploying the cameras..... 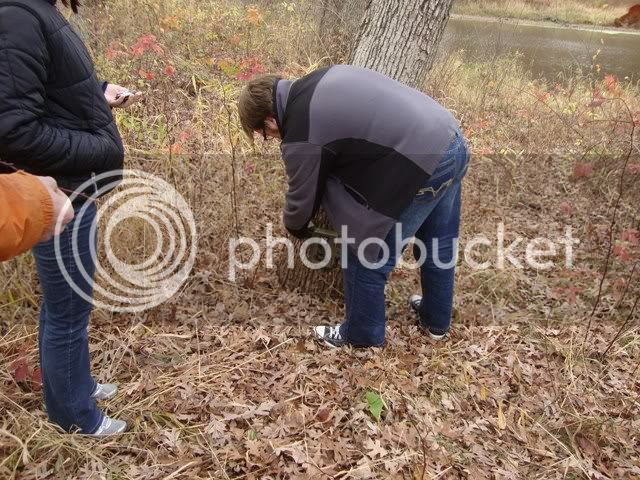 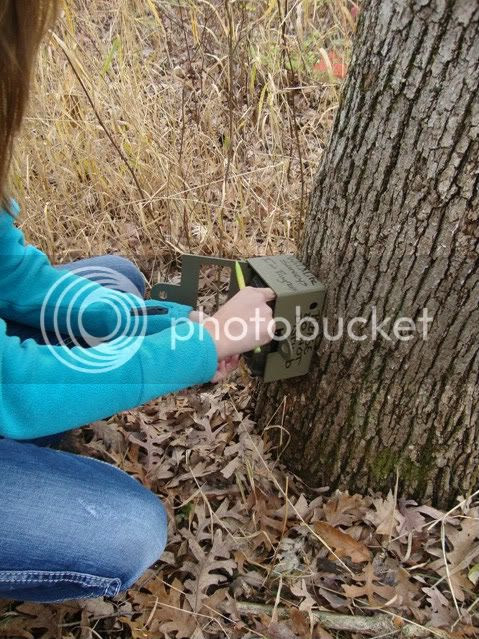 ...next we carefully checked them to make sure they were on..... 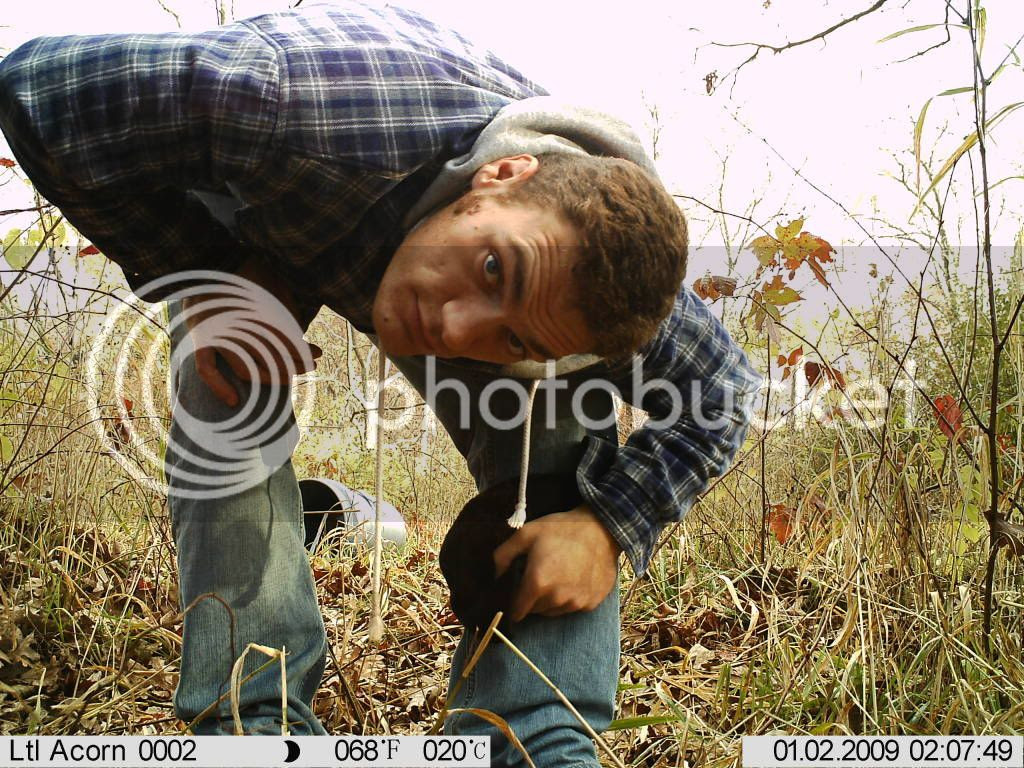 ...of course, in our absence, the critters were nice enough to do the same..... 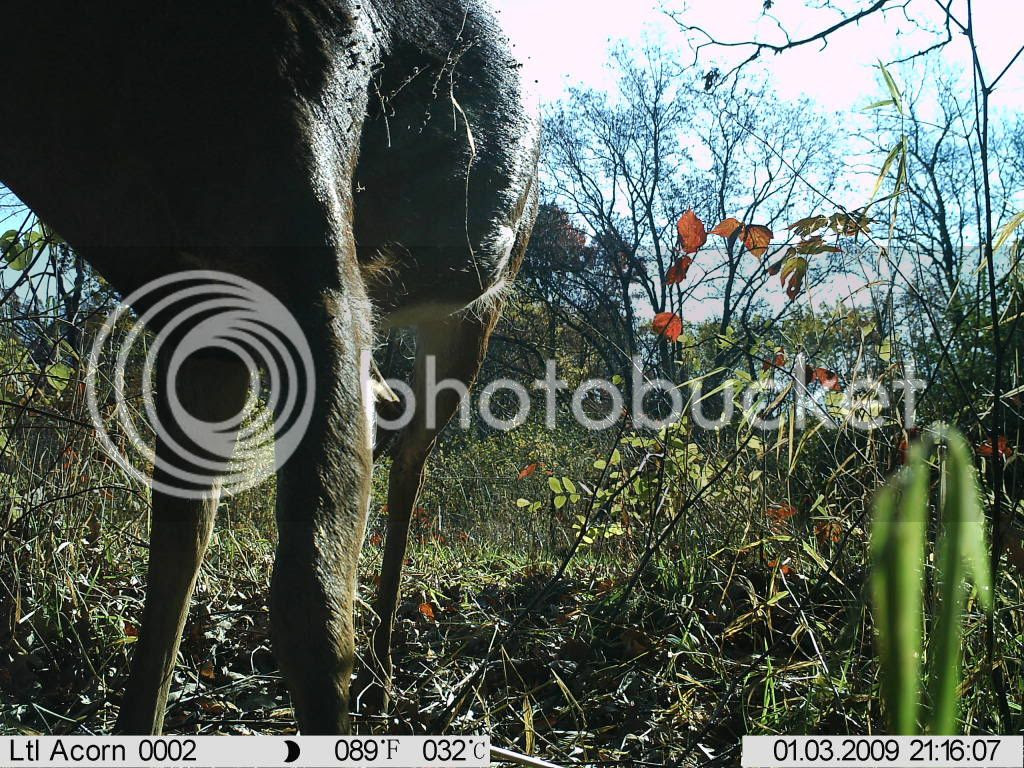 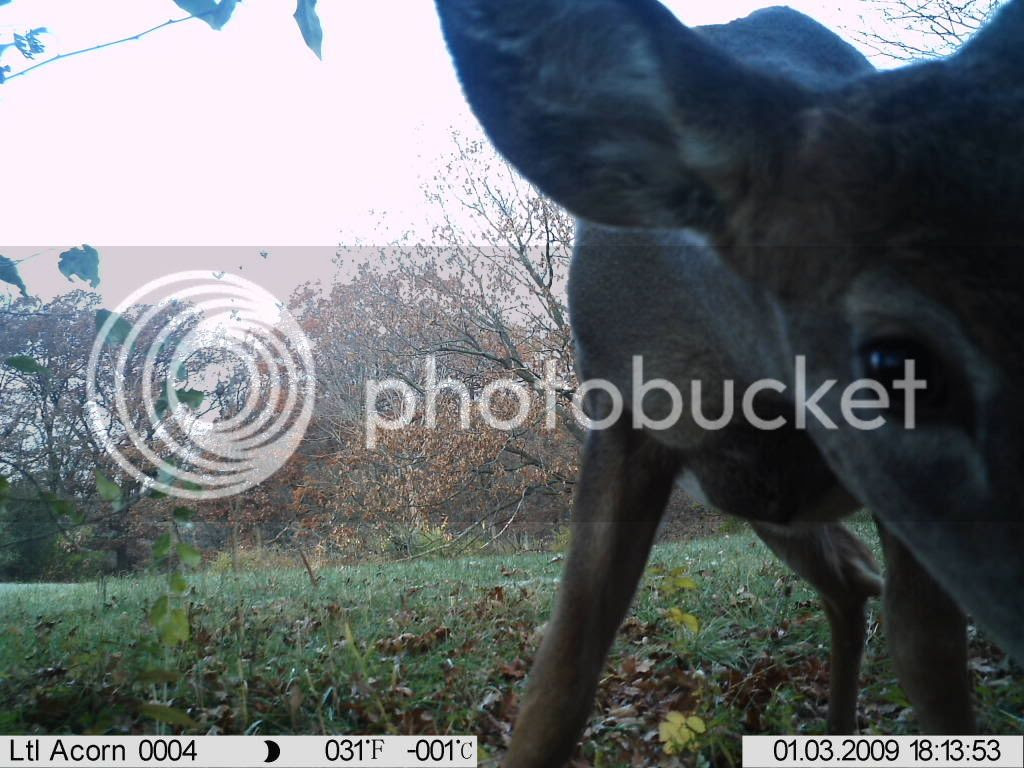 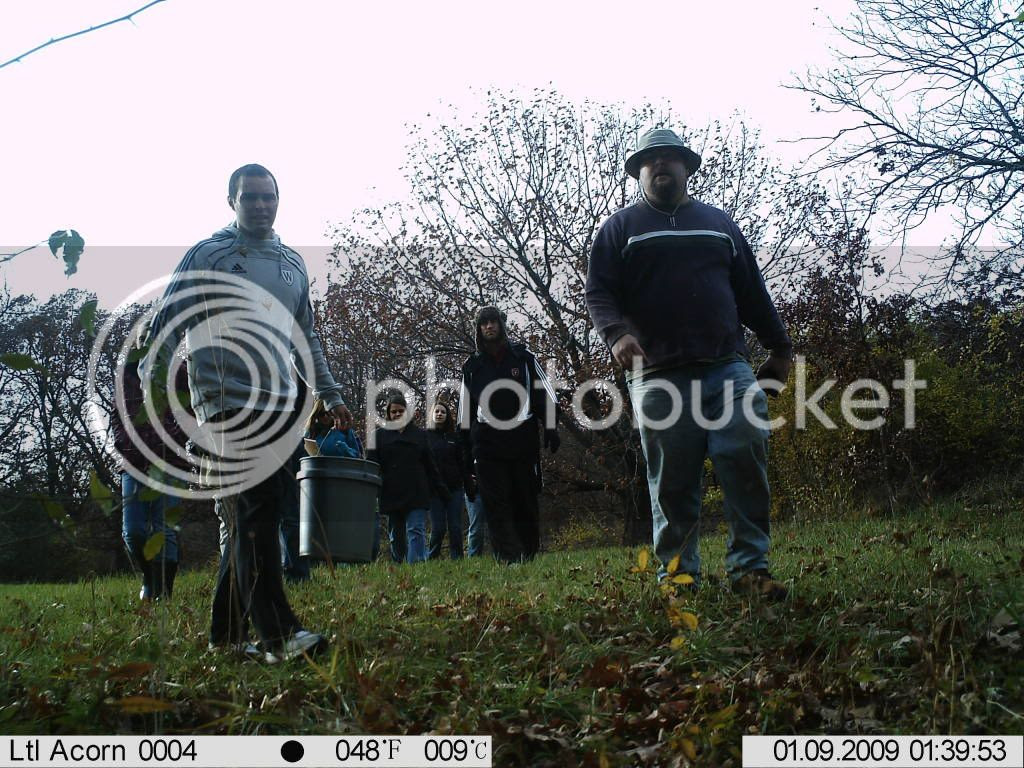 We pulled the cameras and checked the pictures back in the lab.  As it turned out, we had three species to work with for our exercise in estimating population size with capture-only data. 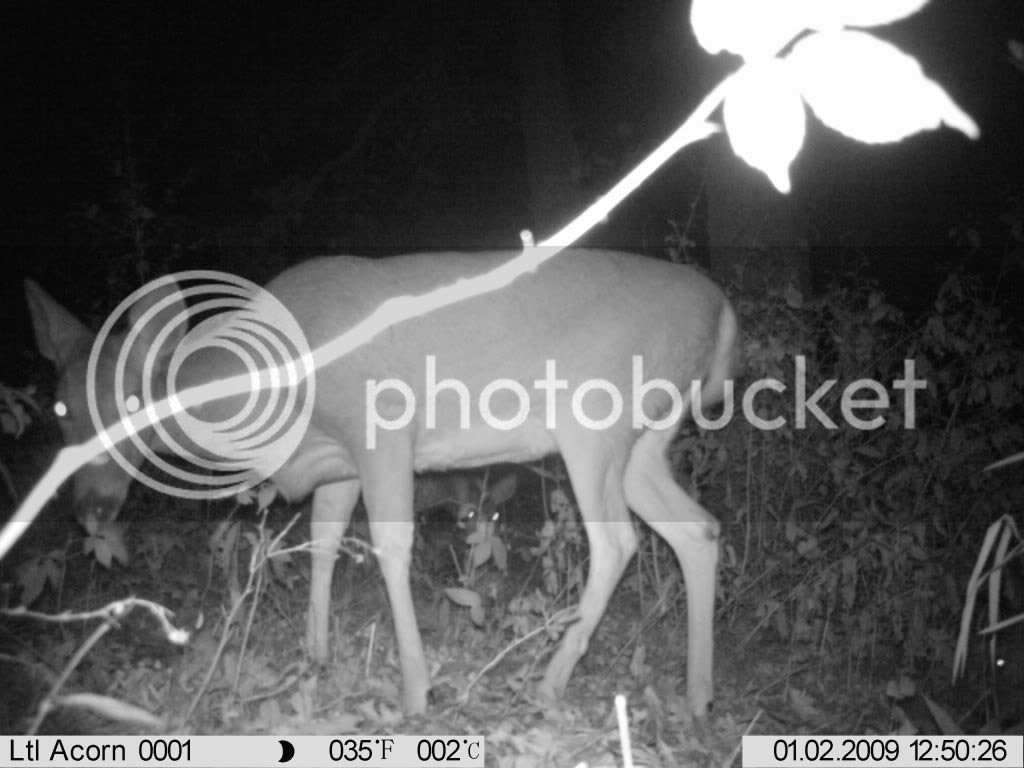 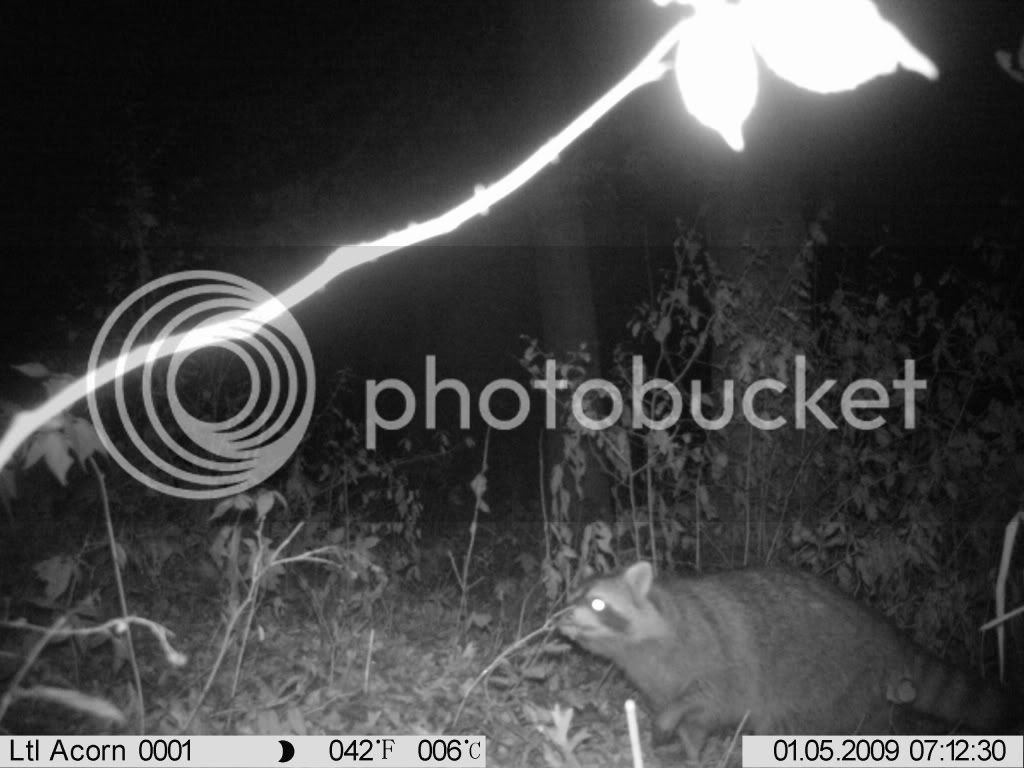 And the Fox Squirrel (Sciurus niger)....at first I had just written this off as an Eastern Gray Squirrel (it's too easy to resort to calling any squirrel an eastern gray 'round here!)...but was luckily set straight by JVN over at Backyard Beasts! 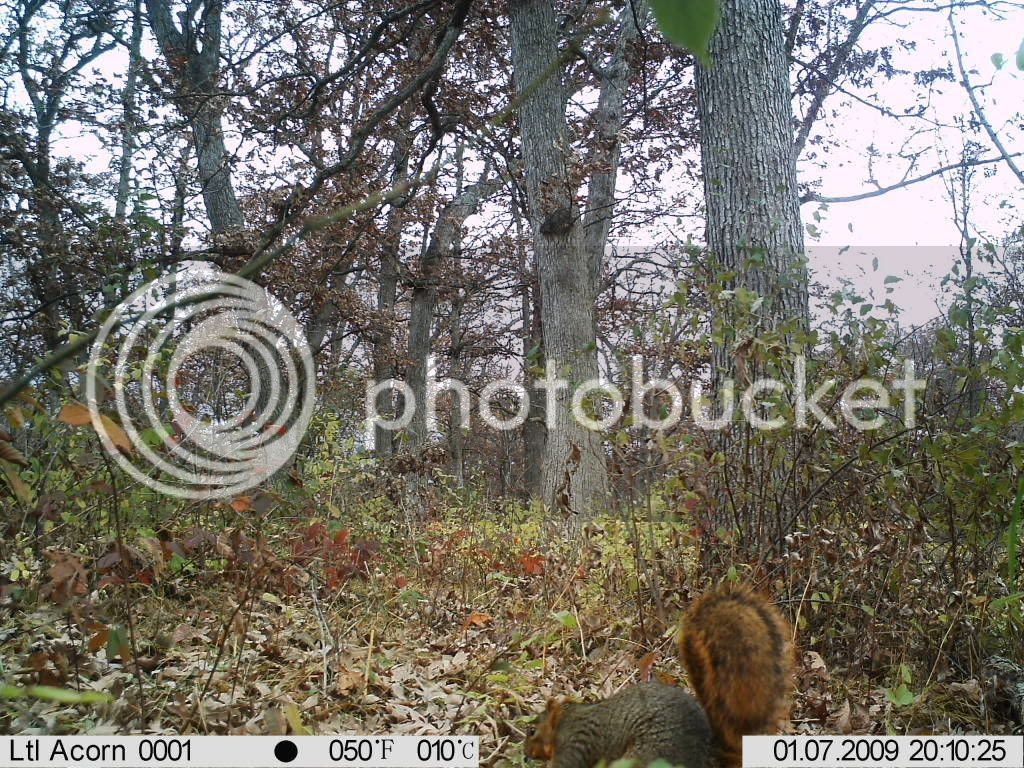 Every camera caught pictures of something....and even got some pretty neat shots (I'll hopefully post more of these later as well).

A rather nicely posed doe.... 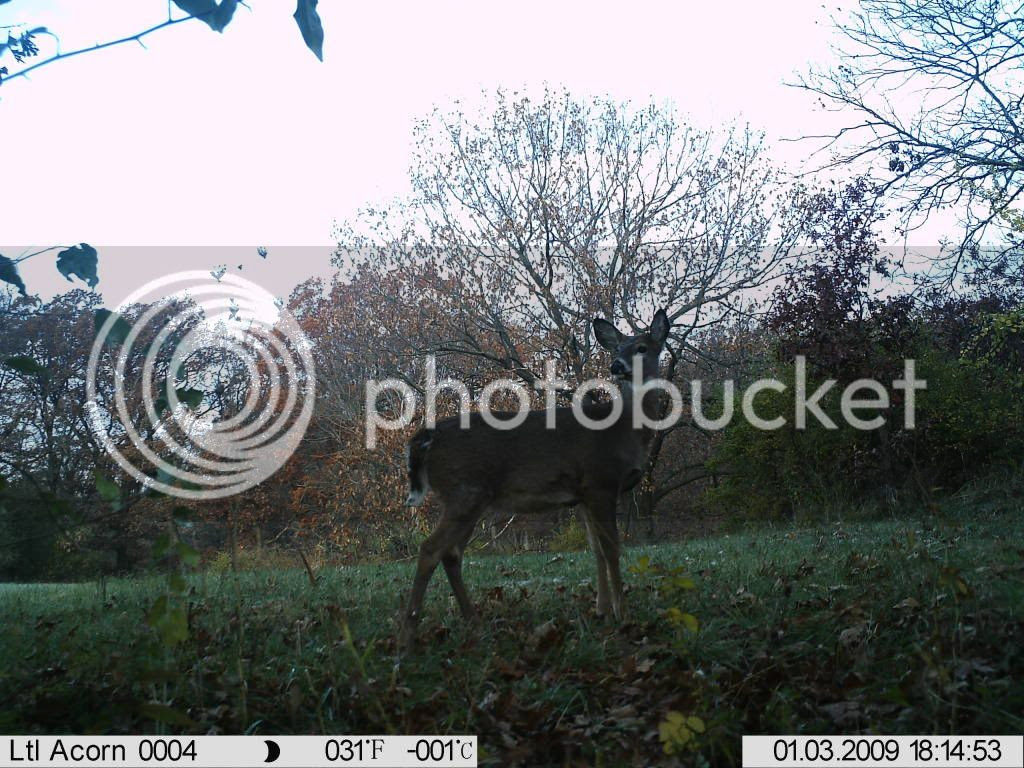 Another shot of a doe, who is apparently still nursing a pair of twins! 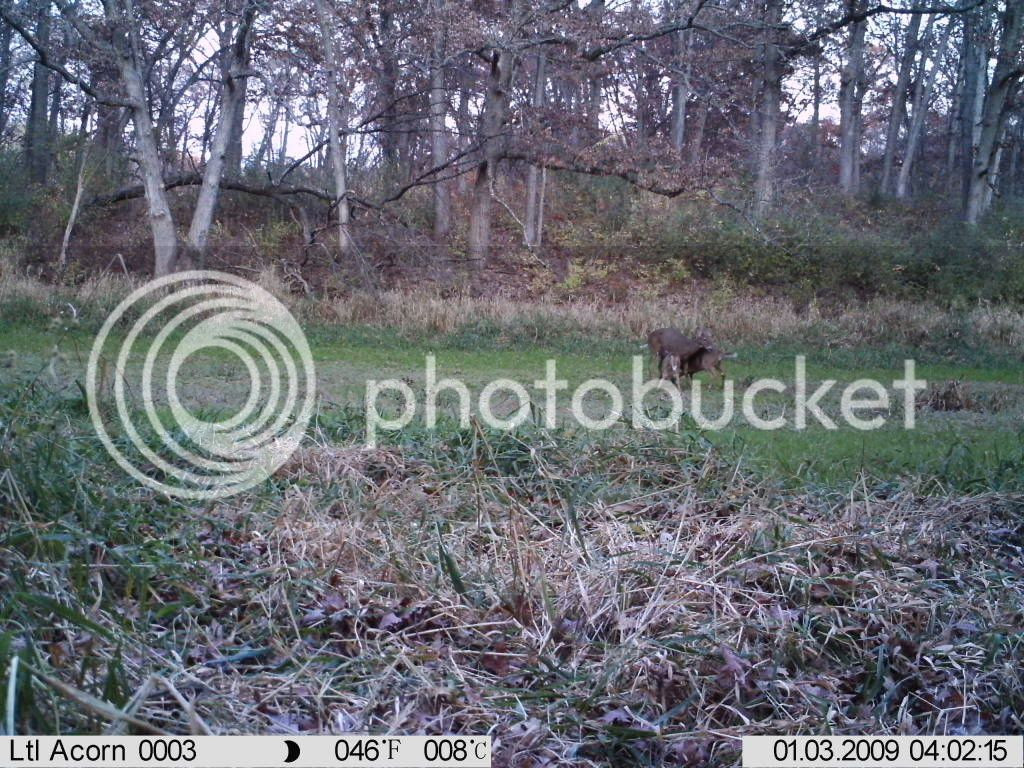 ...see cropped and zoomed in version of this picture below....you can almost feel why she appears to be wincing! 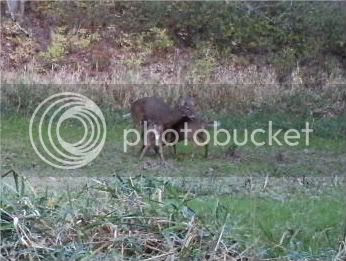 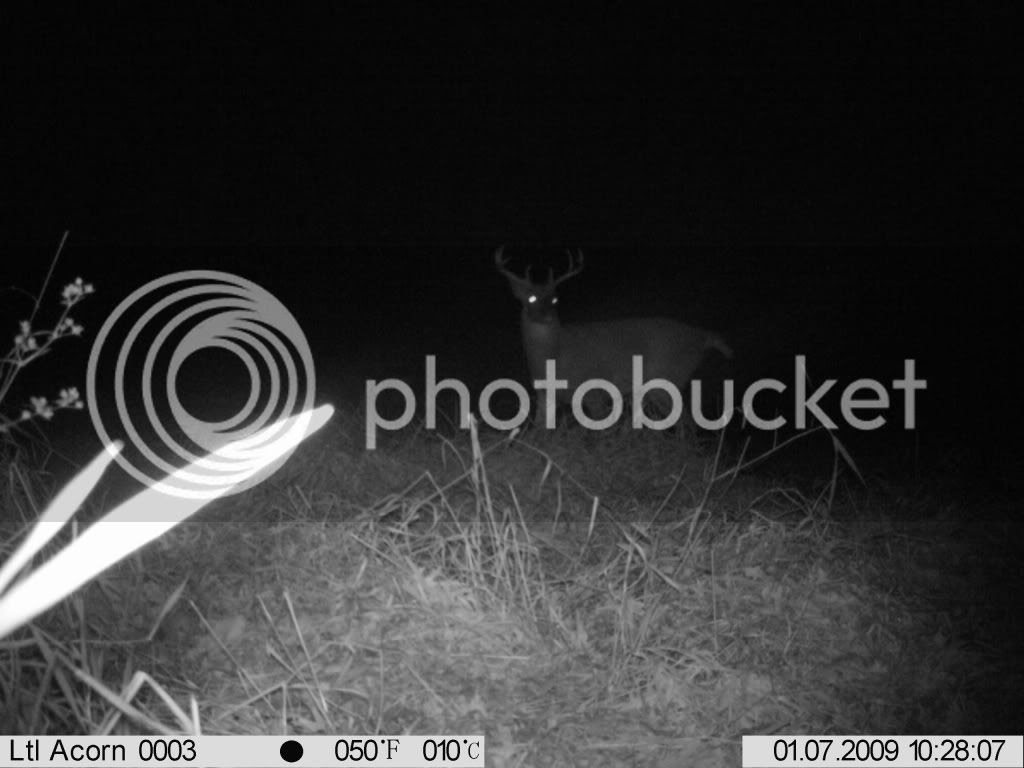 So we came back and the students compiled their data for all three species.  This included four survey locations (cameras) over seven survey periods (days).  At the end, the Royle-Nichols model gives us the following information:


The confidence intervals and the detection probability estimate provide means by which we can assess how strong our estimates of abundance are.

Could I provide you with our results?  Sure.

But....why cheat you out of the opportunity to learn how to do this for yourselves?

(Really...the students haven't turned in their abundance estimates yet, which was part of their homework assignment.  I don't want the answers freely available on the internet, should they HAPPEN to see my blog).  :)

Posted by Trailblazer at 4:58 PM 2 comments: