The winter is when canines seem to become most active.  Probably this is due to the fact that late winter/early spring is the breeding season for the species in this area.

Take, for example, the Coyote (Canis latrans).  The so-called "singing dog", or "talking dog", as its greek name translates to (in reference to their vocal nature).  The coyote is a wary animal.  Let's face it, you'd be wary too if folks felt about you the way they feel about coyotes.  It's impossible to deny that humans have waged a nation-wide all-out war against predators throughout our history.  I'm not saying it's right or wrong (well, at least I'm not saying one way or the other right now).  It's just a fact.  Let's focus on coyotes, for now.  The Colorado Division of Wildlife claims on their website that between 1915 and 1947 some 1,884,897 coyotes were brought in dead and had bounties paid on them (Armstrong, 2010).  This is reported to be largely due to reports of livestock depredation.  It is interesting to note that coyotes "thrive despite widespread attempts to control or eradicate them" in Colorado (Armstrong, 2010).  This is only one of countless examples.

Regardless, this form of predator control is not only something that occured in the past.  It also is not something that occurs solely at the behest of upset cattle-ranchers.  Sometimes attempts to control 'yotes are made becuase they threaten other species of wildlife that we deem more desirable, are a greater conservation concern, or are things WE like to hunt and really don't want coyotes cutting in on our action.  For example, the Nevada Department of Wildlife has a number of "Predator Management Plans" that involved removal of coyotes (and other carnivores) to help conserve deer, big horn sheep, elk in 2006 (http://www.ndow.org/wild/conservation/predator/index.shtm).  I don't mean to pick on this particular agency, as others have done the same.

Many (not all) recreational hunters loath coyotes because they'll occassionally take white-tailed deer as part of their incredibly varied diet.  I'm sure this will draw the ire of folks, but some would not consider a reduction of the white-tailed deer herd a bad thing (ask a person who's had Lyme Disease recently, or is interested in the conservation of native plant communities).

Even your humble Trailblazer...when working on a research project that involved radio tracking Bullsnakes (Pituophis catenifer sayi) in Wisconsin.... had coyotes that gave him a wee bit O' trouble.  It seems 'yotes will also eat snakes (even big snakes with expensive radio transmitters implanted into their body cavities; Kapfer et al. 2008).  In fairness, I didn't propose removal of coyotes to conserve snakes (although I may have felt a small twinge of maliciousness towards them at that time :)  ).

Now...remember....I'm not saying coyote removal for these reasons is right or wrong.  But, this persecution has resulted in some pretty wary (and savy) coyotes!  That hapless canine that is perpetually (and with futility) attempting to catch a tongue-plugging, "meeping" bird on Saturday morning cartoons isn't named "Wil E. Coyote" for nuthing!  Coyotes, it seems, can easily adjust to negotiate the current urban/suburban/rural matrix that we've created on the landscape (for reference, see reports of coyotes in Chicago and New York City; Illinois Department of Natural Resources;  New York State Department of Environmental Conservation).  *I must also here recommend DeStefano's recent book Coyote At the Kitchen Door. A very nice book that focuses on living with wildilfe in suburbia.*

But ...back to wary coyotes.  Street-wise or otherwise, 'yotes are flat-out wary as heck!  So, to get pictures of them on a camera trap requires extra effort and alot of patience!

Back in June (2010), I placed a number of cameras on my study sites.  I was expecting anything and everything.  However, what I was quickly struck with was the absolute lack of carnivores captured by cameras. Many thoughts came to mind about how to rectify the situation.  I was certain coyote and fox were around (I had seen their tracks earlier in the project).  So,  I decided it was time to try some commercial trapper scent, and l settled on applying a scent lure of animal glands, musks and/or urines.  I also figured I'd try some food lures of some kind.  This eventually drew in some grey fox (Urocyon cinereoargenteus), but still no 'yotes!

I started reading up on what traditional coyote trappers do to catch their quarry...and it can be very extensive and requires meticulous scent control on the part of the trapper.  Well, that's just not feasible for me.  I'm doing more in the field than just messing with my cameras and all the other work gets me good and sweaty.  So, there's no way I have the time to spend on the personal scent control that many report I need.

But...turns out patience is as important as anything.  Also, time of year may play a factor.

My first capture (out of 8 cameras deployed across two sites!) comes in October of last year.  A fleeting shot as one crosses in front of my camera along a wooded stream that runs adjacent to a power line Right of Way.  This picture occured on a camera that I do not put scent or food lures in front of. 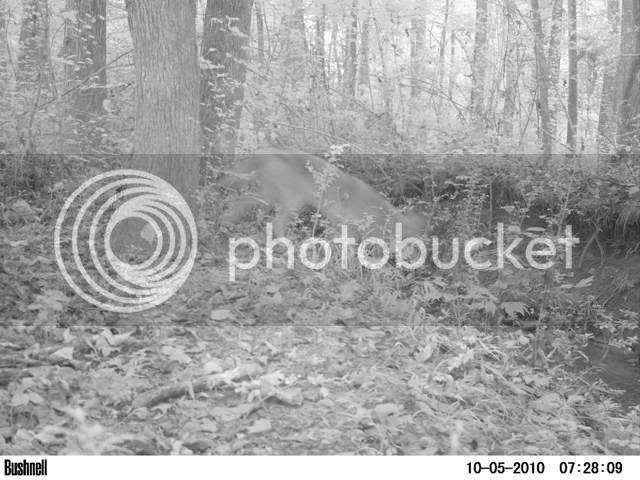 It takes several weeks for the next ones to show up.  This picture of an individual from a completely different site.  No scent lure was applied in front of this camera.  Interestingly, there was another camera placed roughly 80 yds away from this location....and I tried alot of different scent lures in front of that camera 80 yds from this one, with no avail.  Yet, at that distance, the coyotes must have smelled the scent at that other camera, but their spidey senses must have been tingling becuase I never got a picture of them there. 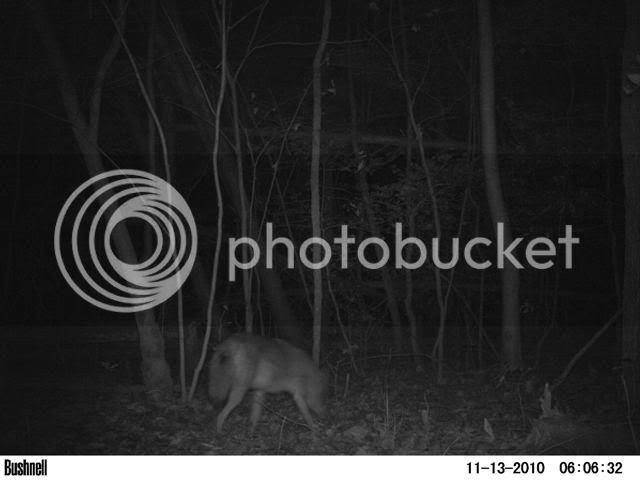 The individual below was captured on a different camera, but still at the same study site where the first picture was taken.  No scent lures used in front of this camera either.  This individual is obviously high-tailing it outta there. 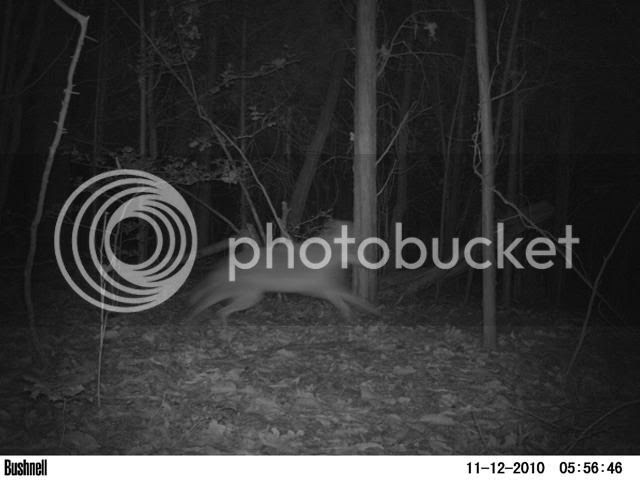 An important point about camera traps.  This particular brand is considered "Infra-red", or IR.  So, at night a series of red LEDs glow slightly, which causes just enough illumination for the special IR filter over the camera lens to take night pictures without a bright white flash.  The bright white flash (presumably) scares animals away, although this is debatable.  However, although less obvious at night than a white flash camera, the IR flash is still visible.  It doesn't visibly illuminate an area, but if the animal is looking directly at the camera, they will see the red LEDs flash.  It's those glowing red LEDs that must have scared the coyote in that last picture.

After that, things get pretty quiet on the 'yote front, and it's not until mid-December of 2010 that they start showing up again.  But when they show...boy do they show!

First crossing the stream multiple times in the same location as the first picture in this blog entry. 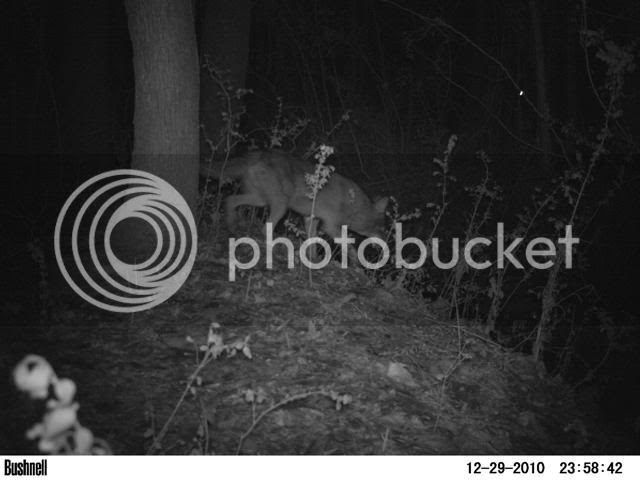 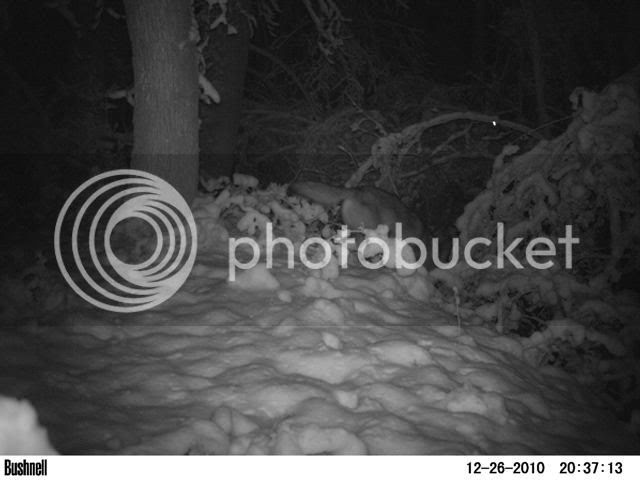 Then, crossing in front of a camera located down stream from the location pictured immediately above 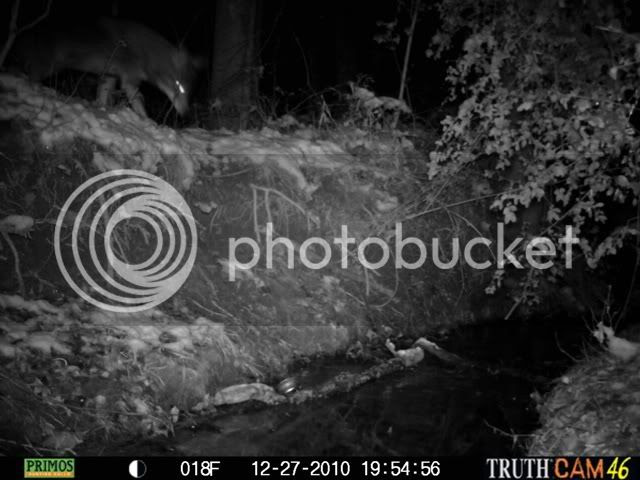 Here a Christmas Coyote following a stream corridor at a completely different camera location at another site. And...the trend continues on into the new year.  This first picture is my personal favorite.  Mostly becuase this coyote is looking right at the camera.  Given the fact that it's day, there shouldn't be any red LED glow to cue the 'yote into the camera's presence.  But...the camera just doesn't look right, I guess.  The 'yote gives the camera one glance and is nowhere to be found later! 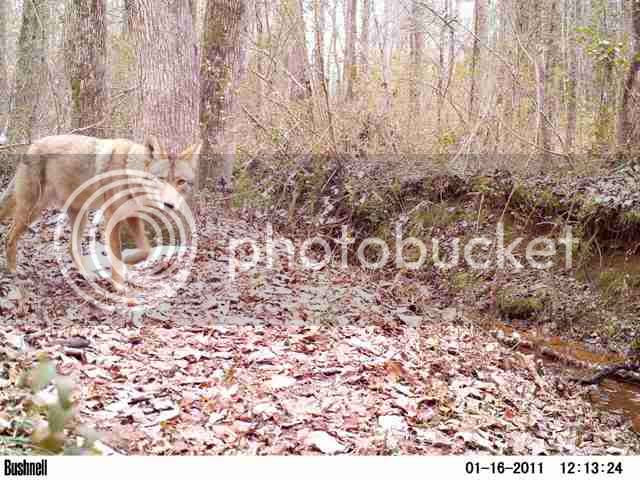 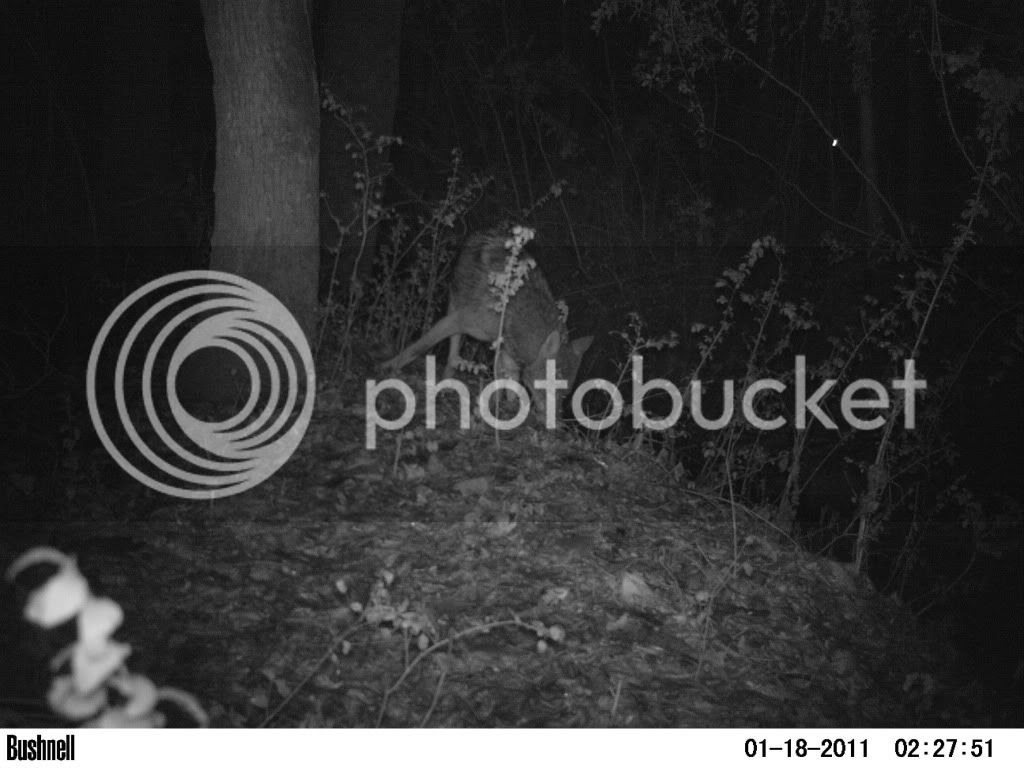 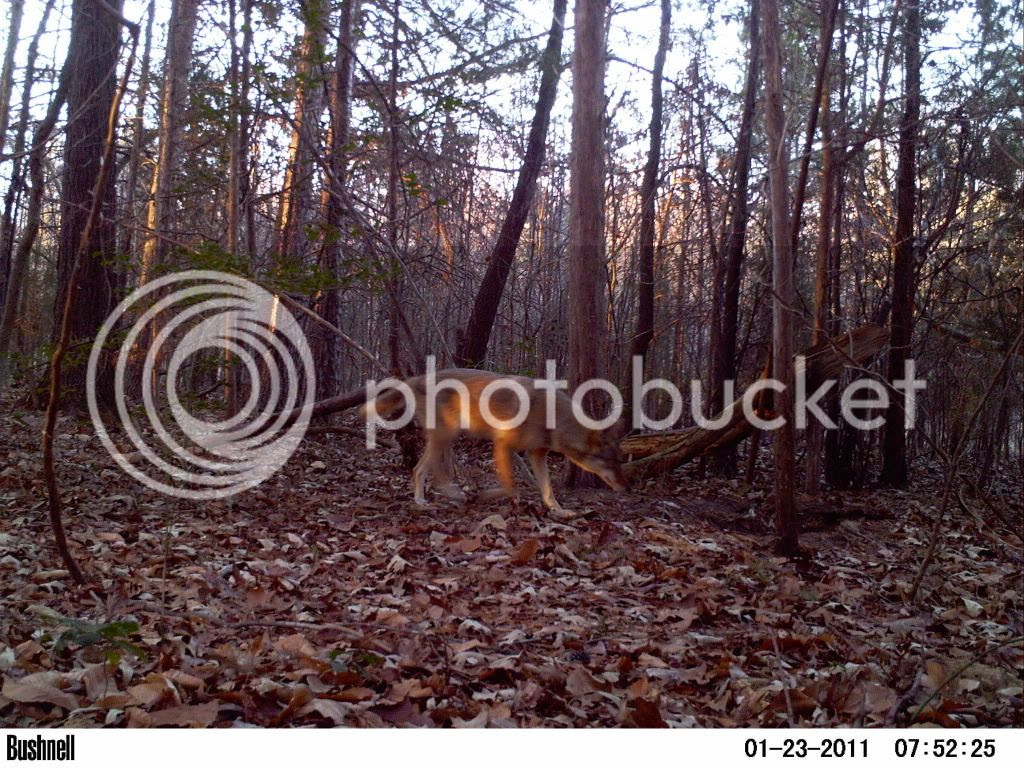 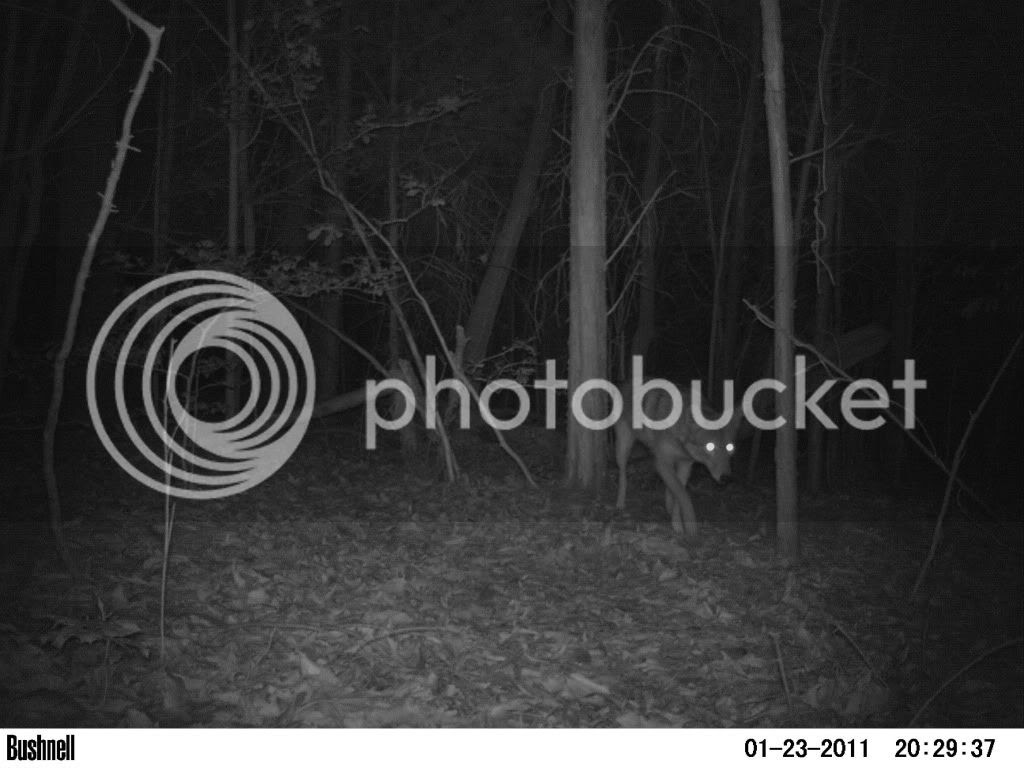 Another interesting note: this last picture is at the same camera as the picture I posted above with the coyote obviously being scared by something (taken on 11/12/2010).  But...in the night time picture captured immediately above (taken on 1/23/2011), the coyote pictured clearly gets the red LEDs straight in the face and casually walks past.

I'm guessing a period of acclimation had to occur.  And coyotes, being as smart as they are, learn that if something isn't a threat...don't waste your energy running from it!

I'm a coyote fan.  For some, that apparently means I'm a hippie, pinko, commie, environmentalist, tree-hugger.  I'm not.  I'm a realist and I know that the coyote can be problematic.  I'm also not an animal rights activist (although I ain't crazy about unneccessary animal testing), but that means I understand that in some instances 'yotes may have to be removed.  I am, however, a conservation biologist, which means I'm interested in practical and objective approaches to conserve biodiversity.  The coyote, it would seem, has thwarted all of humanity's efforts to eradicate it for many years.  Despite being one of the most loathed and reviled critters in America (behind, perhaps, the wolf and the rattlesnake), it has learned to get around every trap we set and every gun barrel we point.  It also has been shown to be a very useful predator, based on the work of Kevin Crooks and Michael Soule, who coined the term mesopredator release as a result of their research.  I'd summarize what mesopredator release is for you, but you have to figure out something for yourself, right?  :)  It's a must-read for anyone serious about wildlife conservation (particularly those interested in birds)!

So, I suppose we could ask the questions:

Are coyotes an important part of the ecological communities in which they naturally exist?

Do coyotes need to be removed sometimes?

Are there probably much bigger concerns to human, livestock or other wildlife's safety than coyotes?

I'll bet a large sum of money there are!  Feral pigs, feral dogs, feral cats, mosquitoes, cars and Homo sapiens (to name a few) pose a bigger threat to the three categories listed above than coyotes ever will.