The Problem with Feral Cats....

Feral and/or stray cats abound around our new rural home.  I'd gotten pictures of them in the woods behind our house on several occassions, but didn't realize the level of the "problem" until I put a cam along the back of our garage facing an Eastern Chipmunk (Tamias striatus) burrow.  Although I thought it was a tad too soon, I checked the camera after 24 hours to see if the angle I used was good.

I was shocked too see how many times a puddy tat passed in front of the camera during that time.  Four different individuals (mugshots below), passed the camera a total of seven times within 24 hours. 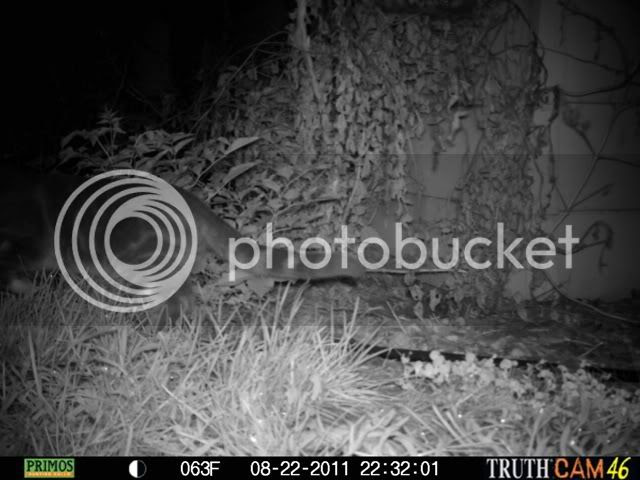 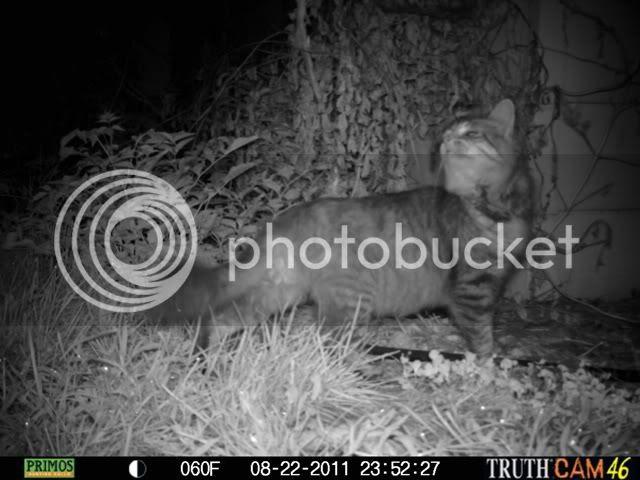 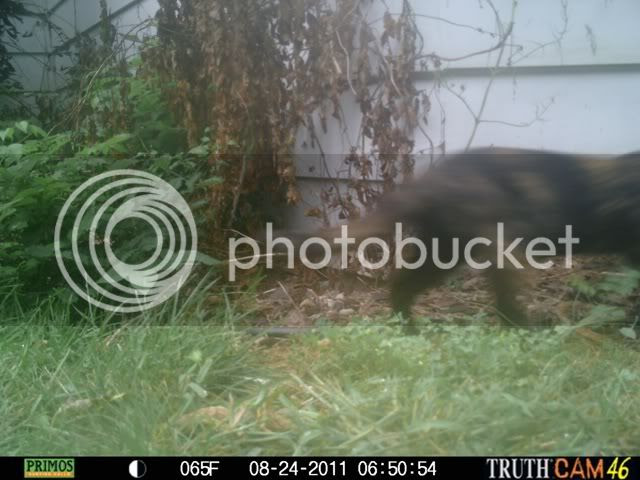 They are obviously interested in the Chipmunk burrow as well....I've gotten pics of other rodents scampering around in this spot too, so it's a kitty buffet trail.

The worst part is that I only one of these individuals is one that I've caught pictures of before.  I now believe I have observed a total of SIX different individuals slinking around the property.

The last kitty kat pictured above has been camera-trapped in several different locations near our house.  In one case, the pictures of him depicted dastardly activities (see below)!

Some folks are shocked when I tell them that I am a wildlife conservation biologist, and that I could care less about protecting stray or feral cats...or even protecting pet cats allowed to run loose.  They seem to think that because I like "animals", I also like feral stray cats.

However, "Wildlife" and "Domestic Animals" or "Feral Domestic Animals" are very different things.  There is nothing "natural" about a feral or stray cat on the loose.  There is also nothing natural about a domestic cat that is allowed by its owners to come and go as it pleases.  They are not native wildlife.  They are an introduced exotic species. As such, in my humble opinion, they have no business loose on the landscape.

We have a number of native wild Felids in North America.  Several once had fairly extensive ranges in the US: the Bobcat (Lynx rufus) and the Cougar (Puma concolor).  The others had historic ranges that barely entered U.S. borders to the south, such as the Jaguar (Panthera onca; which once had a somewhat extensive range in the southwestern US), the Ocelot (Leopardus pardalis) and the Jaguarundi (Puma yagouaroundi).  To the north, the Canada Lynx (Lynx canadensis) had a range that once included a fair portion of the northern U.S..

Most of these wild felids have been extirpated from the U.S., or had their ranges and populations drastically decreased in the last 100 years.  The Bobcat still has a fairly extensive range compared to the other species.  The Cougar is relatively common in the west, and expanding its range eastward (although east of the Mississippi River it is still very uncommon or nonexistent).

So, we have native cats that could actually use protection or conservation. Yet some folks will immediately jump on board with protecting feral cats as fast as they will native wildlife.  There are, in fact, entire organizations devoted to stray pet advocacy, and promote the trap-neuter-release policy for feral cats.  Alot of these folks may actually get down-right angry at any mention of actively controlling feral cat populations via lethal removal.  I often hear it implied that such activities are inhumane.  They seem to prefer the trap-neuter-release method of population control.  Granted, this may result in a decrease in feral cat populations over a longer time period (at least in areas where the method is rigorously practiced and upheld), but a neutered cat still needs to eat.  Trap-neuter-release doesn't make up for the fact that these feral neutered individuals must still hunt for the remainder of their lives.

I'm also confused about how lethal removal of feral cats is viewed as inhumane, while granting these unnatural predators free reign to eat wildlife is not.

If we must protect feral cats, why not protect all feral animals?  Where are the feral hog advocacy groups?  Why not protect invasive species of snakes?  How 'bout some pro-zebra mussel propaganda?  I'll tell you why feral cats are treated differently: they're cute and make us think of our pets (or they actually are pets).  Who can identify with a giant bristling feral hog, with tusks like bananas tearing up native vegetation?  Who can identify with an exotic snake that eats something "desirable", like a bird (or a house cat)?  Thus, decisions about which side to be on are driven by emotion.

I had originally planned to review papers that have studied the impact of feral cats preying on native wildlife in this blog post.  Yet, I've found that this just results in a powder keg of constant squabbling by folks on both sides, so I decided to drop that.

At any length, I knew there were feral cats in the area after only two nights of camera trapping (see my previous post).  It only took another week to get pictures of them preying on wildlife.  I believe the prey in the pictures below is an Eastern Chipmunk.  We have several that run around the backyard caching food in various places. 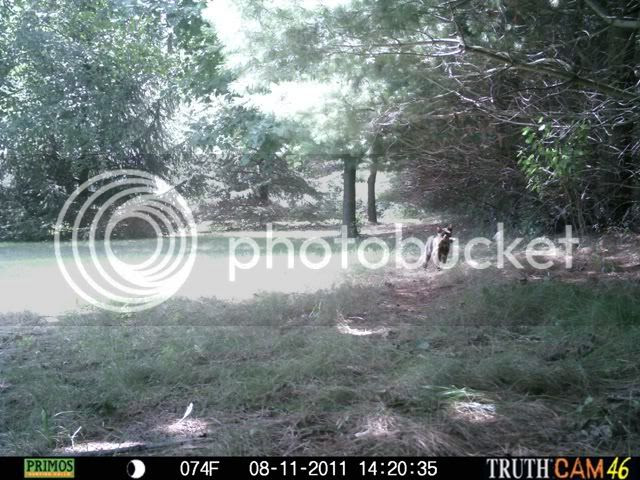 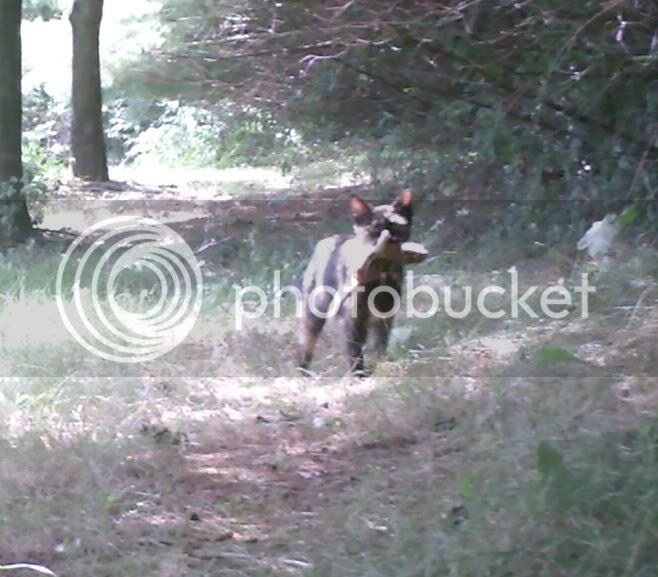 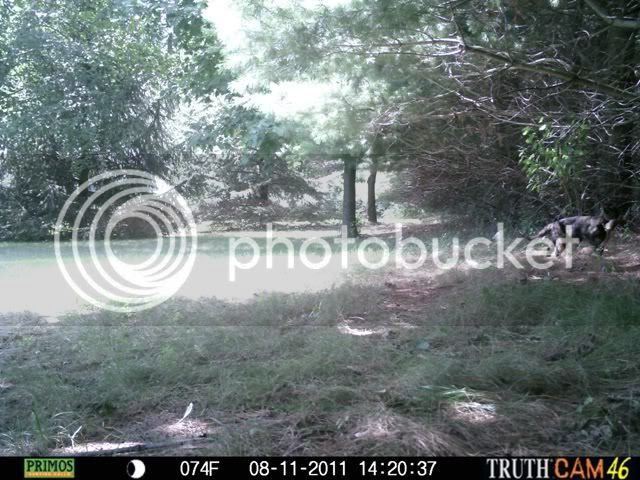 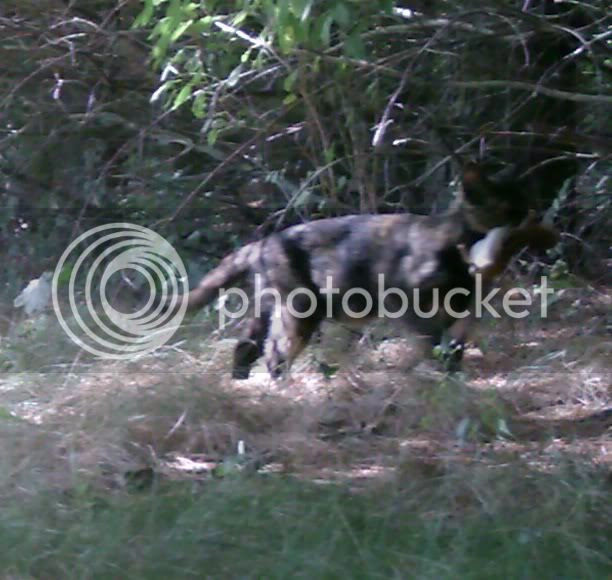 Chipmunks are, obviously, not a rare species...but that is not the issue.  The problem is that, in less than a month, I have captured pictures of six different feral cats in the vicinity of our house.  Within the first week of us being here, I captured three cat pictures just off our back porch.  One of these was a photograph of a predation event.

The numbers of predation events that go undetected are likely substantial.  All of these cats are going to eat somehow.

Further Reading (just a smattering from the diverse body of literature that exists on this subject).

Crooks and Soule, 1999. Mesopredator release and avifauna extinctions in a fragmented system. Nature 400:563-566.

Guttilla, G.A. and P. Stapp. 2010. Effects of sterilization on movements of feral cats at a wildlife-urban interface. Journal of Mammalogy 91:482-489.

Foley, et al. 2005. Analysis of the impact of trap-neuter-return programs on populations of feral cats. Journal of the American Veterinary Medical Association 227:1775-1781.

Levy, J.K., et al. 2003. Evaluation of the effect of a long-term trap-neuter-return and adoption program on a free-roaming cat population. Journal of the American Veterinary Medical Association. 222:42-46.

The Wildlife Society. 2011. In Focus: the impacts of free-roaming cats (multiple entries by several authors).  The Wildlife Professional 5: 50-68.
Posted by Trailblazer at 7:32 PM