Recently, I accompanied my research students into the field.  We are in year two of a project focused on Wolves (Canis lupus), which I've previously posted tidbits from (see here, here, and here).  I haven't been able to get out with them to do fieldwork as much as I would have liked on this project.  However, they are amazingly competent, organized and detail-oriented.....so I haven't felt the need to hover over their shoulders. 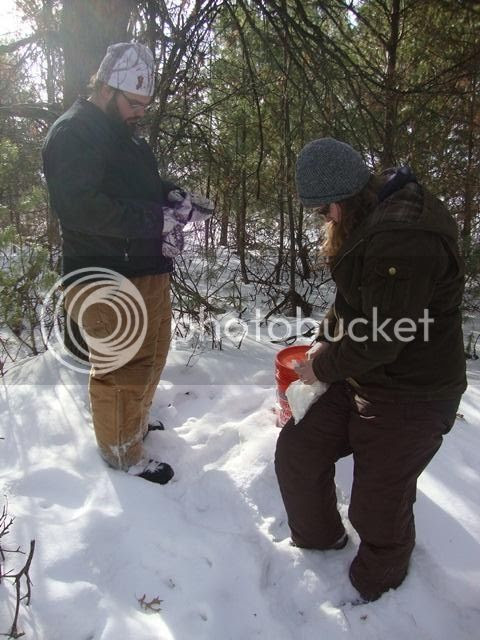 Although I haven't needed to be there, I have desperately wanted to go out with them more often.  Circumstance has always intervened, unfortunately.  During their most-recent trip, however, everything fell into place.

Before I share some of our observations from that trip, allow me to give you a bit of context for what their fieldwork involves.  This project requires that every two weeks, they take a 3 hr car trip north.  Because it's too expensive to stay in hotels, etc., all of their fieldwork must be crammed into one day.  This means a 14-15 hr day, including drive time, assuming everything goes smoothly (if you want to know about some of the 'hiccups', ask them how many times they've gotten a vehicle stuck during these trips :)  ).  The days are shorter up here in the winter.  So, to insure that they have enough daylight to finish their objectives, they leave early (5 am).  This way, they arrive at the first site at alittle after sun-up and valuable light isn't squandered while driving.

Winter fieldwork is the best, in my opinion.  Many folks I know talk about how much they love summer, and given my fondness for herptiles...I understand.  But summer can get just too dang hot.  There are only so many clothes that you can legally take off to deal with the heat of summer and eventually you just have to wallow in your own moisture.  Winter is the opposite: you can always add more clothes.  So long as you are dressed appropriately, winter fieldwork is great.

We needed that appropriate dress at the first site we visited...the sun had barely been up and the air was bitter cold.  Just having the fingers exposed to take pictures with my "fingerless" gloves (with the flip-up mitten tops) set my skin to burnin'!

But, the research students (Phil and Sarah) got right down to work, while I got some photos of them in action. 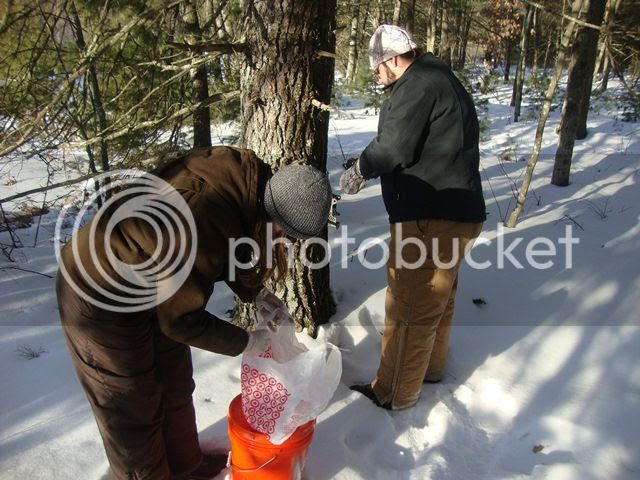 Pretty soon, we were headed back to the vehicle.  It wasn't long before the air started to warm a bit and it was downright pleasant to be working outside.  The amount of time spent at each location isn't too great....although sometimes the walking in and out can take time, depending on the amount of snow.  However, it's the time we spent on-foot that gave us opportunities to observe some very cool stuff!

Wolf packs are in the general vicinity of every study location we stop at.  We obviously don't know where they are.  They could be 50 yds away or 5 miles away, depending on where the pack is within it's territory.  Regardless, we know wolves have probably passed through our immediate area at some point in time.  Thus, there is wolf-sign galore!  We had some great opportunities for photographs....

There was lots of Wolf scat around.  Its fun to try and find some evidence of recent meals by looking at scat.

Take the example below: 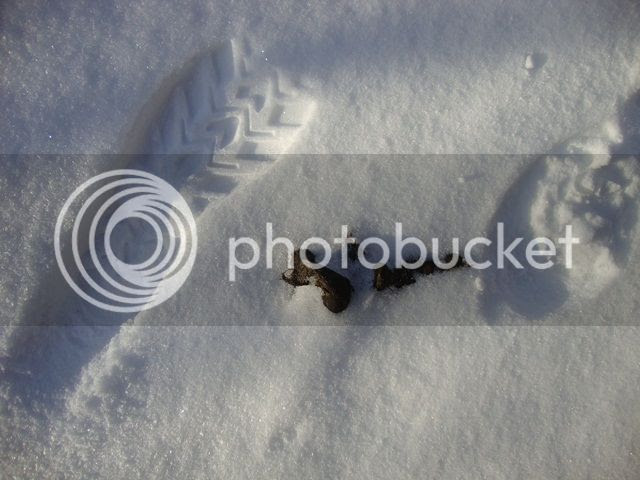 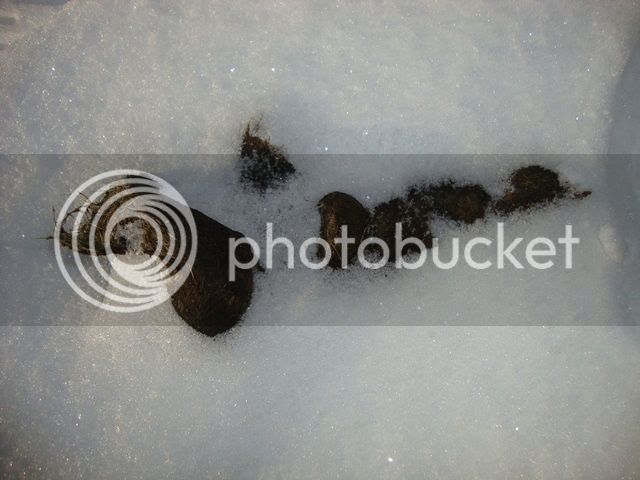 Lots of hair (which a quick inspection appeared to be from White-tailed Deer).  Also note the dark consistency...which would suggest alot of muscle or organ meat was consumed.  This is an important point to remember, especially when viewing other examples of scat we found.

Take a look at another scat below, which was along a different trail..... 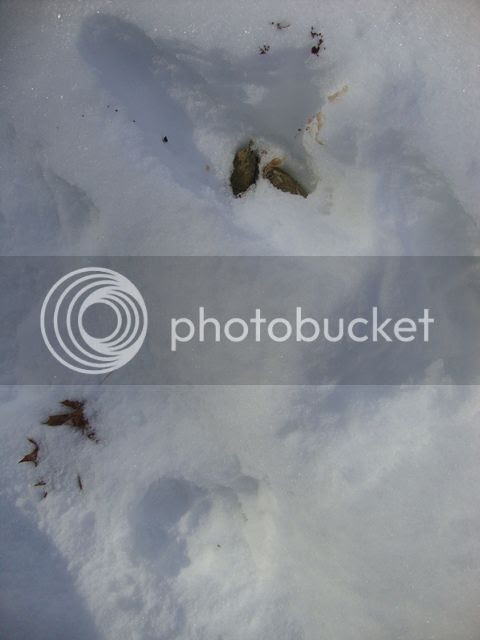 Notice the track at the bottom....scat more towards the top.

Here's a close-up of the scat, itself... 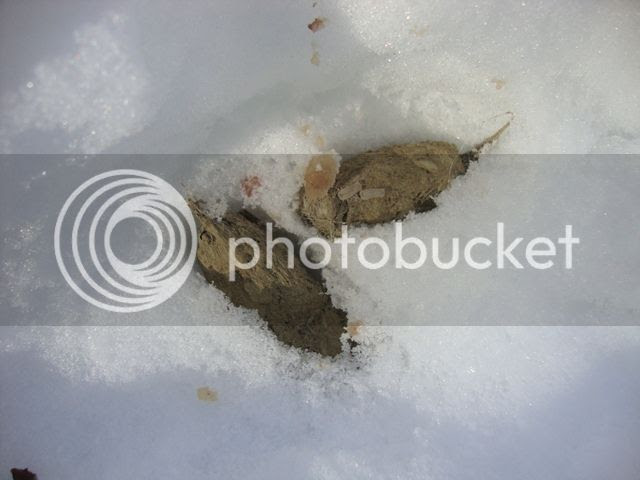 This scat is much lighter in color...a bit more chalky in appearance.  My guess would be that this wolf was consuming less meat and more bone.  Perhaps this individual was scavenging on an old-carcass...crunching up bones, etc.  In fact, there appears to be some bone fragments visible in there.

What's really interesting about this particular scat is that there appears to be a bit of blood (just above the excrement in the picture below). 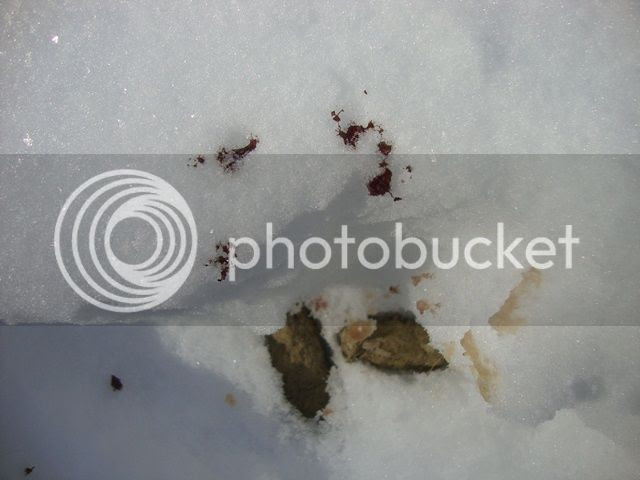 It looks more black in the picture than it did in real life.  On the snow it was a dark red.  So, is this blood due to a bit of scraping from the wolf passing that scat with the bone chunks?  Possible.  Another explanation is that the blood came from a female in estrus.  In this area, we found lots of urine marks.  Perhaps this spot represents a location where a female in estrus dribbled a bit of urine and also defecated.

We are currently in the wolf breeding season (January through April), so females could be in estrus.  Interestingly, females are apparently in estrus for a short period of time (1 to 2 weeks).   Wolves are "monestrous", meaning they have one estrous cycle annually, which occurs at roughly the same time of year.

Speaking of urine...like many canids, wolves mark their territories with urine.  Such territorial markings can be referred to as a "raised leg urination", or RLU.

Because wolves often travel along roads, a good way to quickly assess for the presence of wolf activity is to watch for RLUs from a slowly moving vehicle.  This is relatively easy to do, as the urine really sticks out against the white snow. 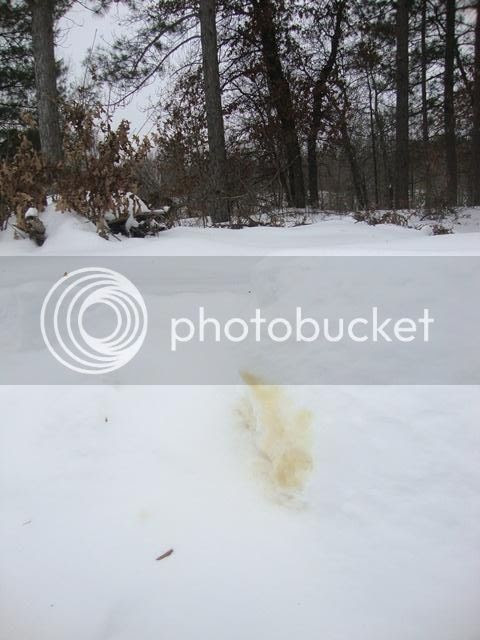 After you see an RLU, its important to get out and assess the area to find more evidence of wolves.  Obviously, folks walk their dogs along roads too, or bring dogs into remote areas for hunting, so you have to check things out a bit to confirm wolf activity.  Tracks, for example, or the height of the RLU can be good bits of evidence in support of wolves being present.

In another location we found beautifully pristine wolf trails along old tire tracks in the snow.  These were along a little-traveled snowmobile path and there were many associated RLUs.  Thus, the RLUs we found here were very likely to be from wolves and not dogs. 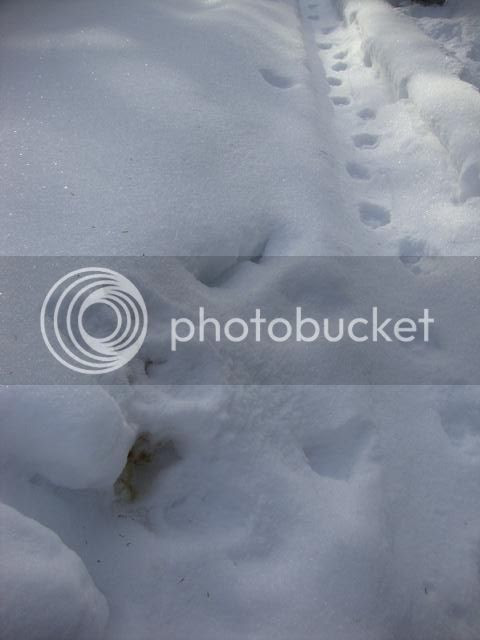 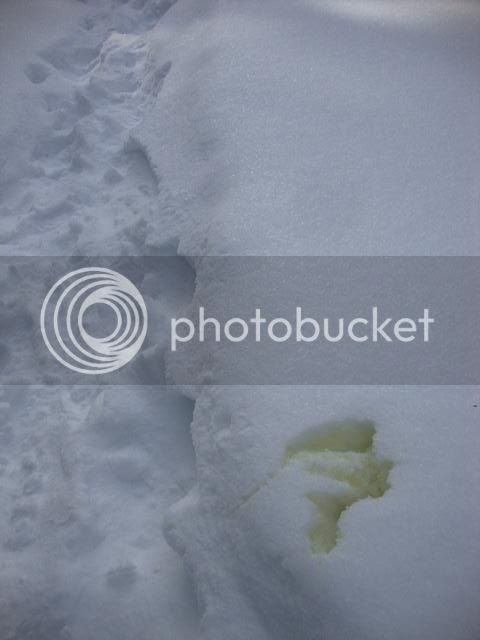 Finally, and as you probably already guessed, there are a plethora of tracks and trails!

There were so many wolf trails on the route in the picture below, it was sometimes hard to tell how many wolves were present. 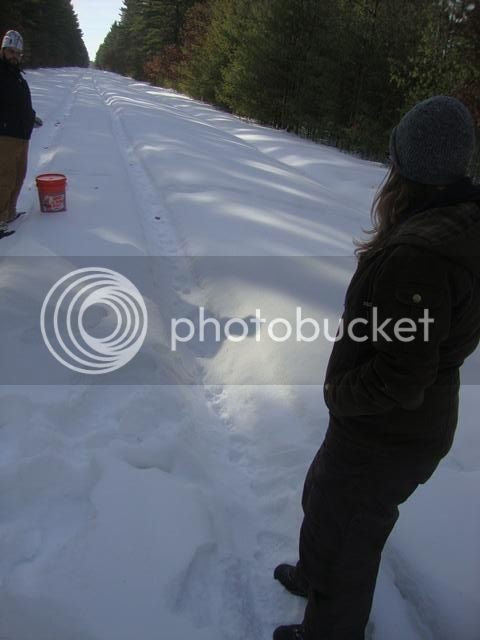 From the picture above, you can also see how deep the snow was by looking at it in relation to Sarah and Phil, whom are standing in a single set of tire tracks on this trail.  Also, note the wolf tracks leading away from us in the tire impression.

Some of these tracks were perfect imprints (and I wish we had brought some snow track-casting gear). 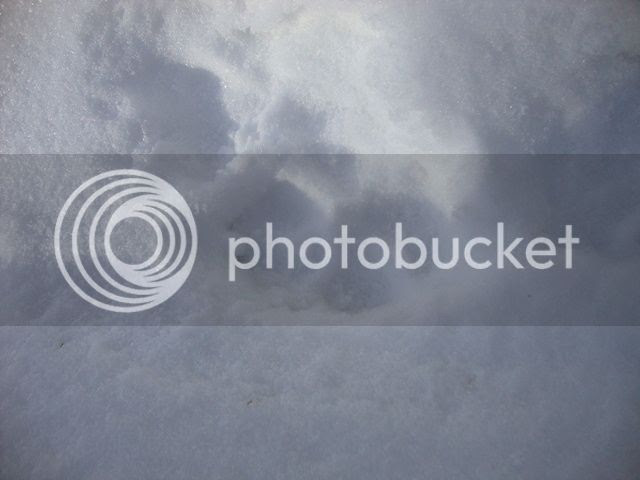 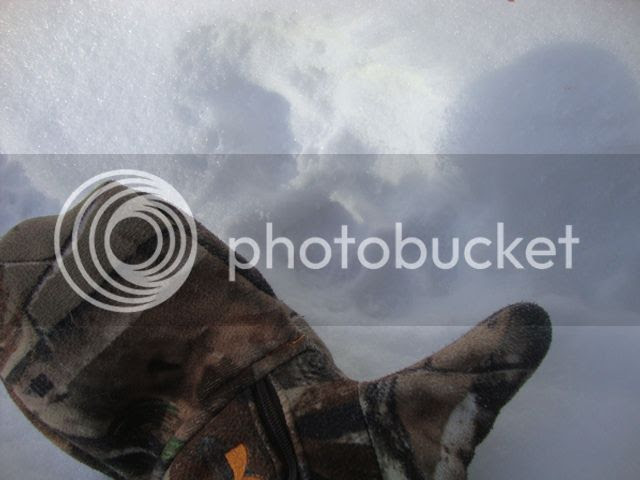 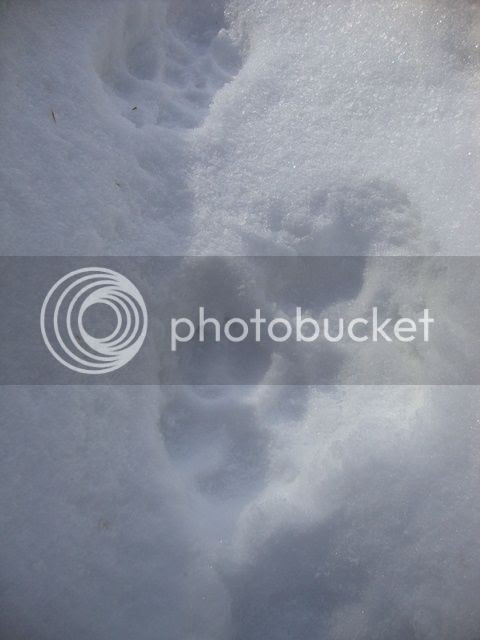 Below is a picture of a domestic dog print, for comparison.  Although my hand is meant to provide scale, this obviously isn't perfect.  The distance of my hand from the track, etc. can confound things, but it will give some you idea of the size relationship. 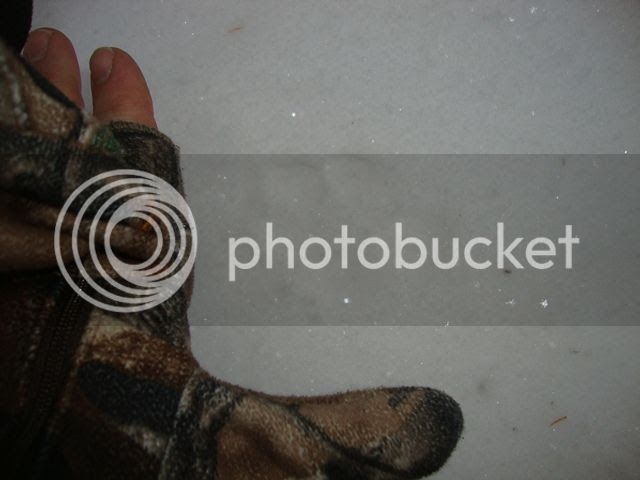 Wolves weren't the only critter we saw evidence of on our trip....

Rodent trails were abundant, and some areas looked as like a criss-crossing highway of rodent tracks. 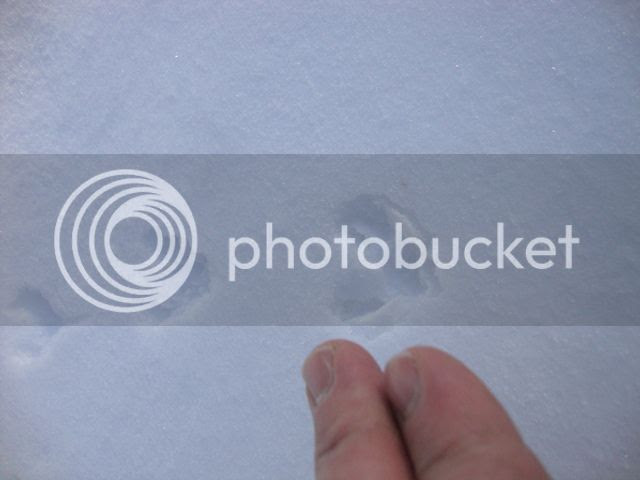 ...more (and bigger) rodents to come!

Lagomorphs were also easy to observe. One of my favorites from those we saw were the tracks of the Snowshoe Hare (Lepus americanus). 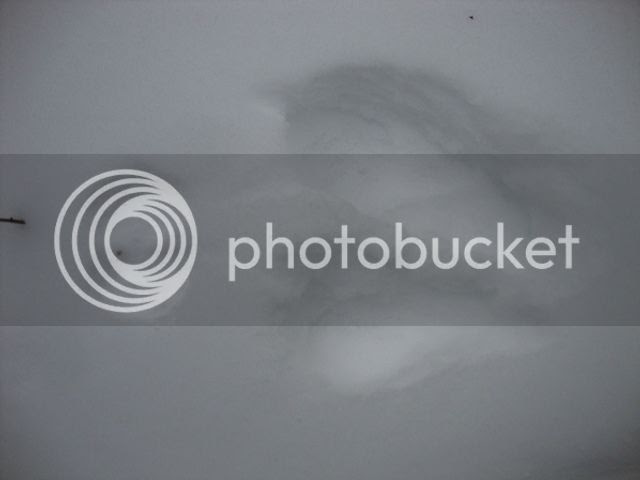 In these pictures, the front feet are obviously on the left, and back feet on the right.

Just check out the size of those kickers!! 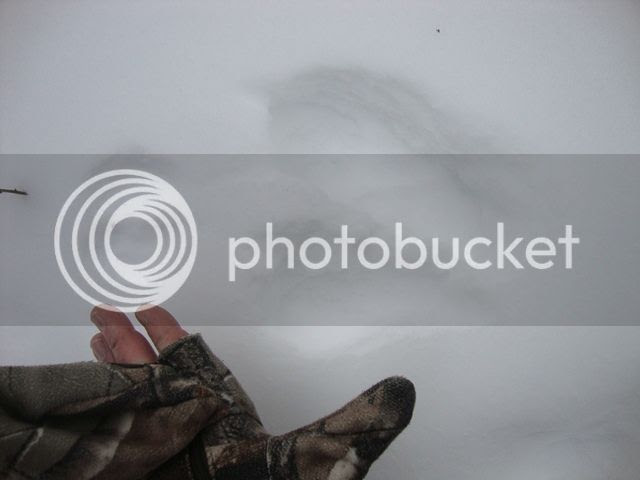 There were other carnivore tracks at some of the sites.  Sarah found the tracks below in the road.  I stepped right over them, as I was watching a little Red Squirrel (Tamiasciurus hudsonicus) moving through the underbrush next to the vehicle.  Thank goodness she was paying attention!

A Bobcat (Lynx rufus) had wandered around along the road very near where we parked. 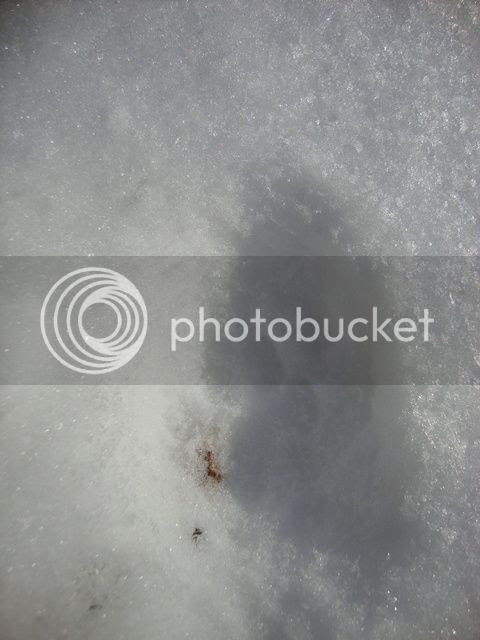 The diminutive size of their tracks always amazes me... 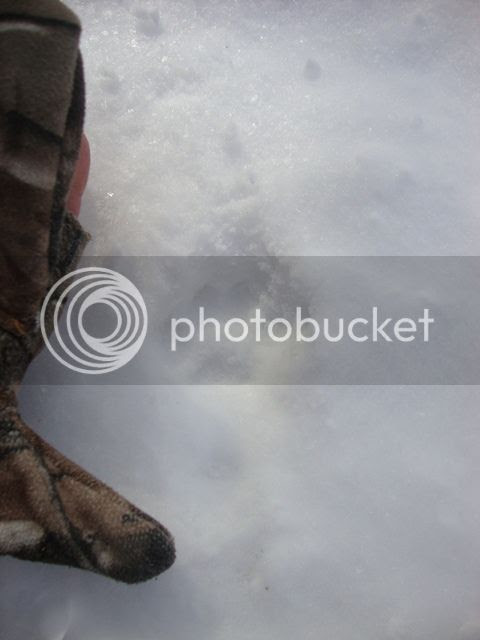 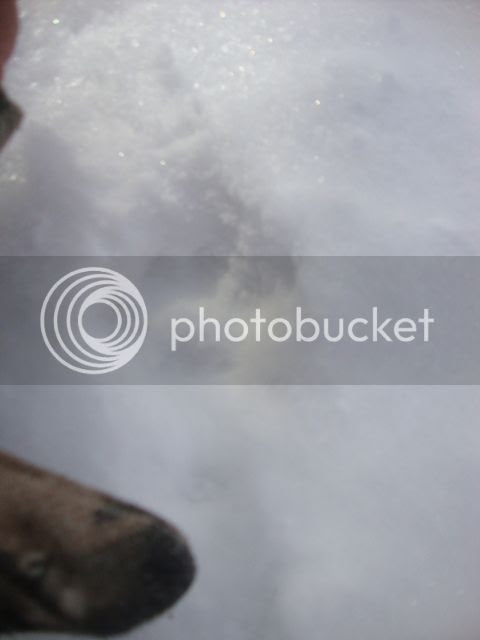 The day was coming to a close.  We made our way to the last of the sites we needed to visit.  On the way, we stopped by a dead-end road where Phil and Sarah had seen lots of Bobcat tracks in the past.  There was a very small culvert just off of the road.  They had found a high concentration of 'cat activity near the culvert on a recent trip.  This suggested that the culvert was perhaps a winter refuge spot for the 'cat.  We thought we'd see if we could get some more track photos, so we took a quick detour to check things out.

We pulled up and I hopped out to peek at the culvert.  The snow was very deep (up to my knees, right off of the road), and it took me a second to clumsily lumber over to the culvert.  From about three feet away, I could tell something had been moving around near the entrance.  There was some brown particulate matter on the snow, and I saw a few recently shed hairs. 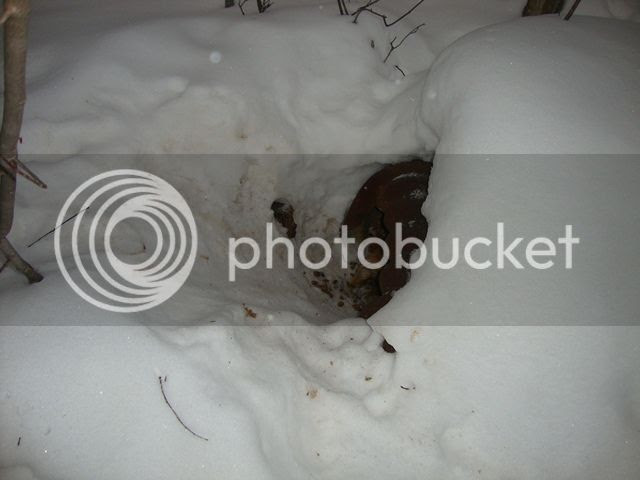 However, I didn't see any obvious 'cat tracks.  I moved to my left a bit, so that I could see the culvert entrance, without being too close.  From that vantage point, I noticed several large pellets in the snow and my first thought went to a Lagomorph (cottontails and hares) of some kind. 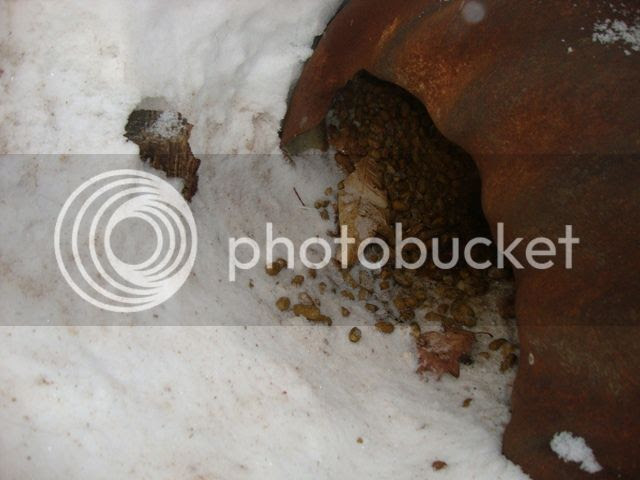 Yet, when I leaned over and saw that the it wasn't just a few pellets, but lots of pellets lining the culvert floor, it instantly triggered memories of a picture in the book "Tracking and the Art of Seeing", written by Paul Rezendes in 1992.  This picture depicts a Porcupine's (Erethizon dorsatum) winter den, and shows a pile of pellets exactly like what I was seeing.
I craned my neck slightly....and there was Porky..... 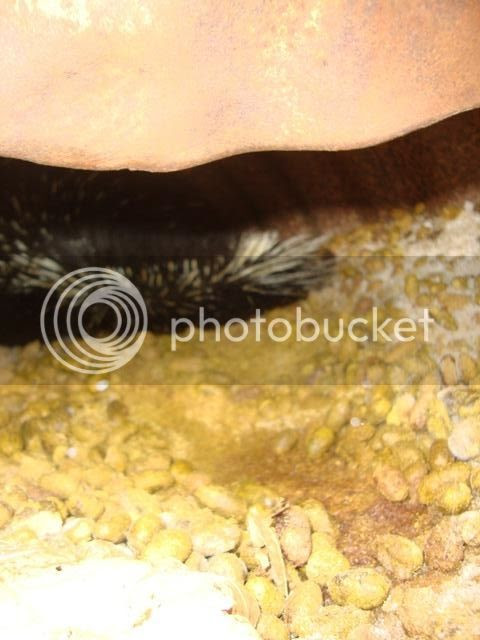 I was able to stick my camera in front of the culvert and snap a picture.  It's not an outstanding shot, but I also didn't want to disturb him too much by taking lots of photos.
It's amazing...who would have thought to look in this small, unobtrusive opening in the snow?
Just to show you how unobtrusive it is, below is Sarah taking a picture of the outside.  The opening is just to her right. 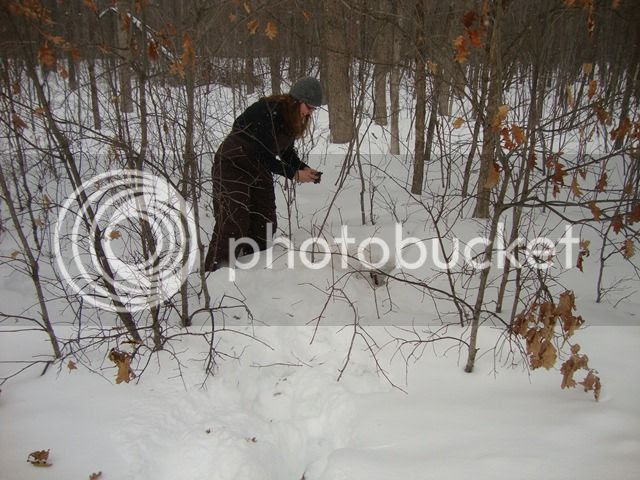 Ultimately, what more could we ask for from a single 14 hour field day?  It's days like this that remind me how much I love my chosen profession.
﻿
Posted by Trailblazer at 9:06 AM