I have alot of herp-related posts to share these days.

I figured I'd sneak this one in quickly before some of the meatier herp posts I'll be sharing in the near future.

Anyways, I was out at one of my study sites on Wednesday, setting the drift fence traps and tracking radio-tagged box turtles.  As I followed the signal from one of my turtle's transmitters through a patch of lowland deciduous forest, I noticed a shiny black rope coiled on a bent tree.  Obviously ropes are rarely shiny, they never sit nicely coiled on a tree, and I can't remember the last time I saw one in the woods....so it was clear that I had found a nice adult Black Ratsnake (Elaphe obsoleta; or as they have been recently reclassified: the Eastern Ratsnake, Pantherophis alleghaniensis).

Of course, I had forgotten my camera, so I couldn't get a picture.  Yet, I noticed there was a nice hole at the end of the lateral segment of the tree trunk.  A perfect refugia for a ratsnake! 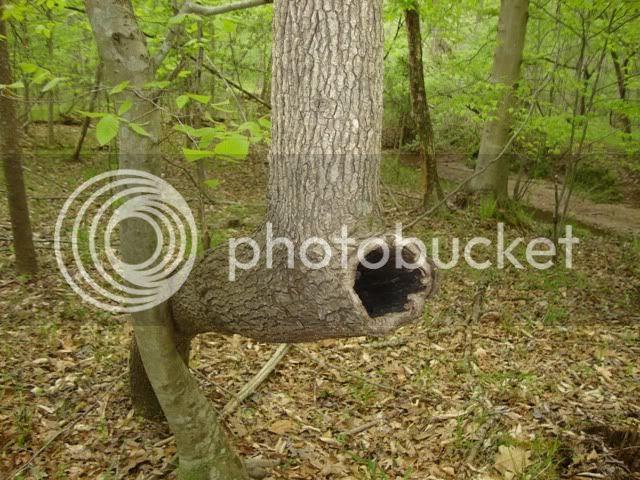 Above: The Snake Hole (note the stream corridor off to the right)
So, yesterday....after checking my drift fences (which yielded little), I meandered back over to the ratsnake tree.  No snake sitting out this time.  Not to be deterred, I maneuvered around to take a peek into the hole.  Instantly, I saw a snake head retract from the opening and retreat deeper into the cavity.

I had my camera this time, and took advantage of the flash to get a few shots.  Although not oustanding pics, they are still sort of neat. 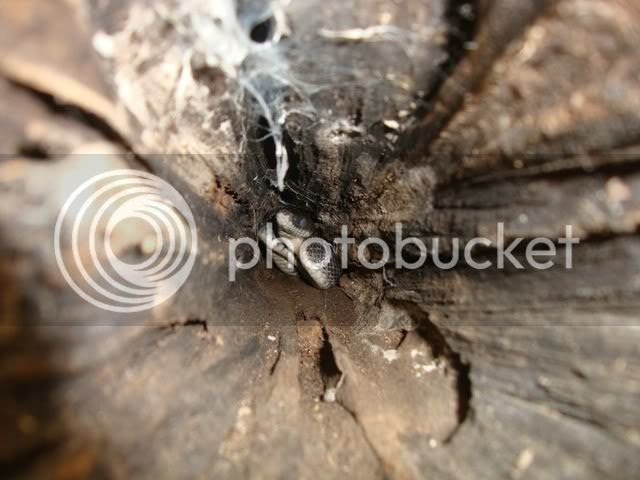 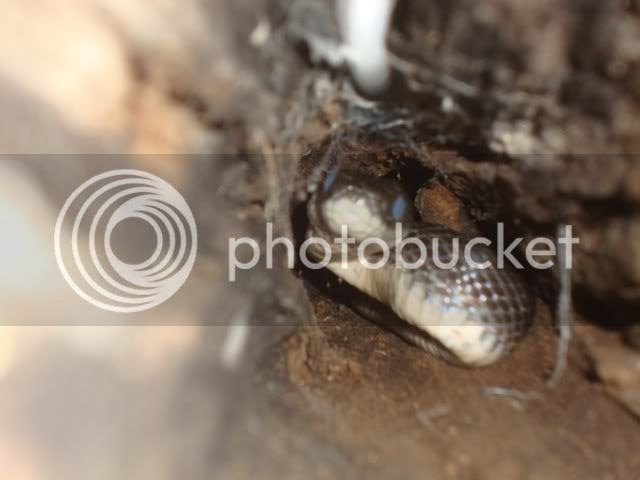 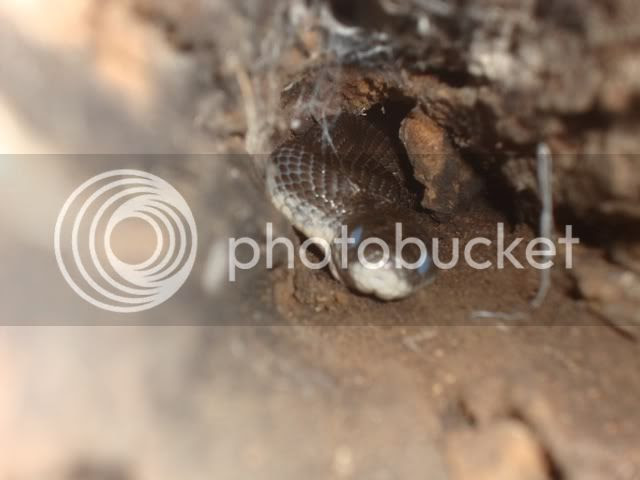 You'll notice the cloudy eyes.  The animal is in, what may be referred to as, the "blue" or "opaque" phase.  These cloudy eyes occur immediately before a snake sheds it's skin.  The old skin that will be removed covers the entire body.  In fact, because snakes have no eyelids, a protective scale even covers the eye. This scale protecting the eye must also be shed with the rest of the skin.  So, as the outter skin layer separates from the new skin beneath, the eyes cloud over for a short time.

In this region, ratsnakes are relatively common.  I've even found them in the garden outside of my office building.  They are most often associated with woodlands (which were traditionally dominant here) and sometimes occur along woodland edges associated with surburban, rural and agriculatural disturbance (Palmer and Braswell, 1995).  This species is also an avid climber (Palmer and Braswell, 1995).  Ratsnakes are constrictors (non-venomous) and, as the name suggests, eat lots of small mammals.  Their climbing tendencies also allow them the opportunity to eat birds, their nestlings and their eggs.  Brown (1979) recorded the stomach contents of 39 adult ratsnakes in this region and found that of 51 food items consumed, 59% were small mammals (mostly rodents), and 37% were birds.