Some bucks have thrown in the towel when it comes to keeping their antlers.  Of course, I'm anthropomorphizing....but...whatever. 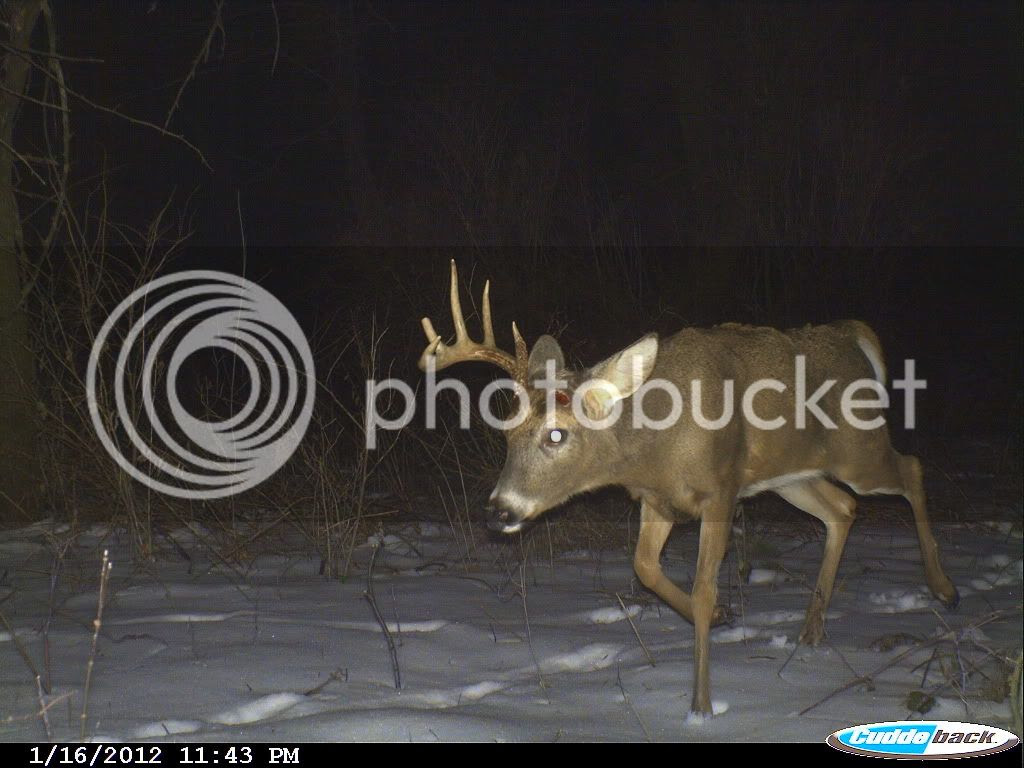 Also, to be fair, this buck didn't truly concede.  It's just a decrease in daylength that resulted in lower testosterone levels, which stopped antler growth and started the process of detachment.  Once the connection between the antler and the pedicel (i.e. raised "platform" on the skull where the antlers arise from) starts to weaken, it probably doesn't take much.  Perhaps the antler got caught up in a dense thicket....or was bumped by a tree.....and just fell off.

Interestingly, it's actually the increase in daylength in March/April that results in greater testosterone production, which stimulates antlers to grow in the first place.  So, daylength and hormones play important roles in annual antler development.  Also, the size of a buck's rack is believed to have a great deal to do with diet.

As the Wisconsin Department of Natural Resources website states:

"During the early spring and summer, deer graze and browse heavily to replenish the fat reserves they depleted during winter. Does must obtain energy to make the milk that they use to nurse their newborn fawns. Bucks use some of this new energy to grow antlers a process that requires a substantial amount of protein and minerals. Although spring nutrition is important for body and antler growth, deer possess adaptations that allow them to prosper in areas with mineral deficiencies. For example, deer deposit minerals in their skeletons throughout the year. Then, during antler growth, they mobilize these minerals to help the antlers grow strong. A second adaptation is the deer's ability to change absorption rates of minerals in their stomach. When using large amounts of minerals for antler growth, deer siphon more minerals from their diet. Deer rely on plants for these minerals, and they select plants offering the highest mineral concentrations."


We are currently in the midst of the "shed hunting season", or the time when deer drop their antlers and collectors start pounding the ground in the hopes of finding them.  Yet, that doesn't mean there is a narrow and definitive window within which bucks will drop their racks......OR that its a forgone conclusion that they'll drop those bony burdens by a specific time each year.

Basically, one would expect them to be dropping around now (Jan/Feb), although one wouldn't be shocked to see bucks holding their antlers for a few weeks yet.

Case in point: this individual below (captured at the same site as the one above).  He still has both of his antlers, and the date of these photos is several weeks after the above picture was taken. So, based on the information I've outlined above, the presence of the antlers on this buck doesn't surprise me that much.  What does surprise me is that this guy still appears to be pushing his luck with the ladies.  We are quite a ways past the main part of the rut here (see figure below, borrowed from here).

However, a doe that has not bred will apparently continue to cycle into March, which may be the trigger for the interaction below.  Althoug with the high density of deer 'round here, I can't believe this doe couldn't find someone to breed with until now!  Furthermore, this guy must be chalk full of testosterone, or at least still has just enough to give it the old "college try". 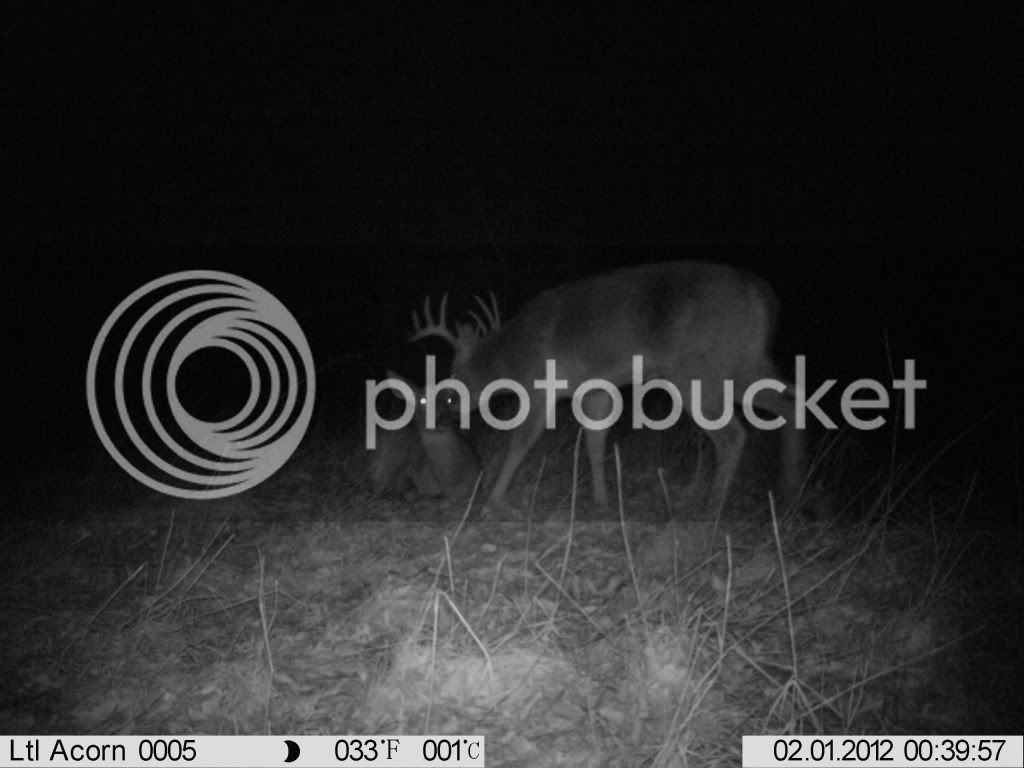 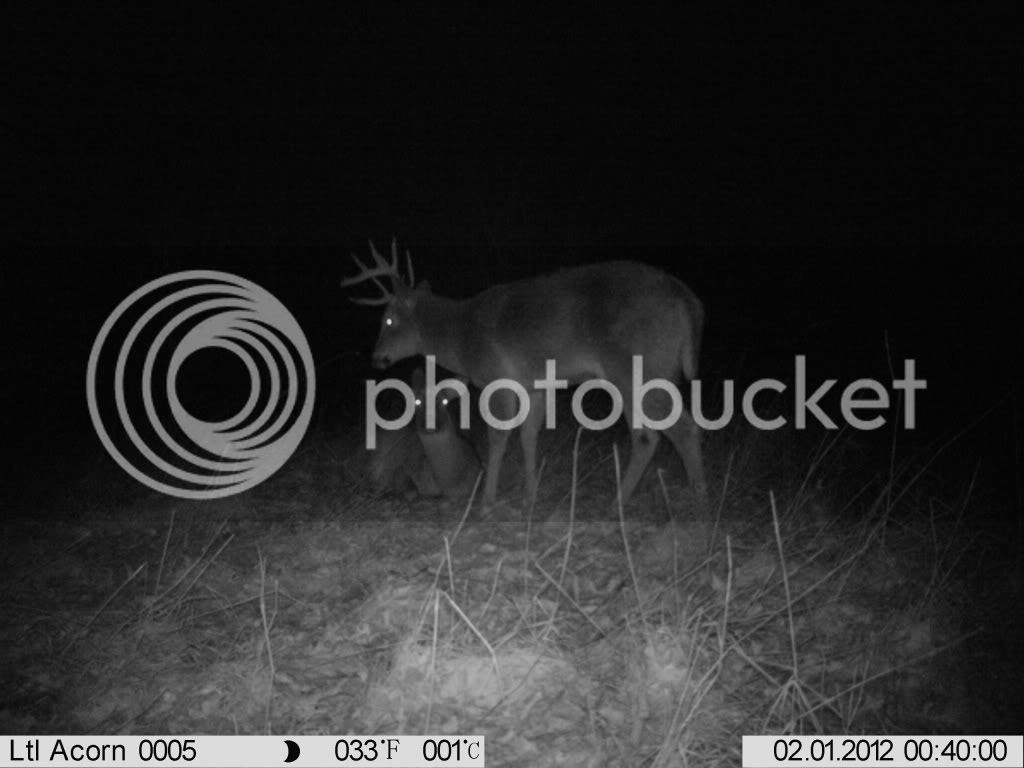 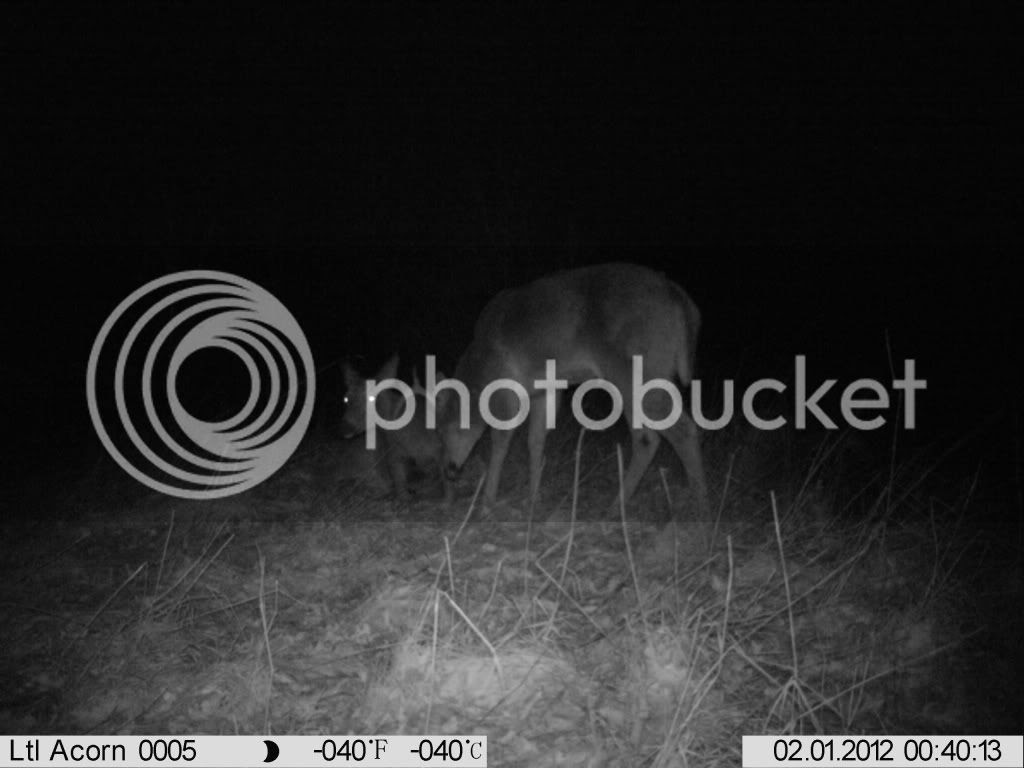 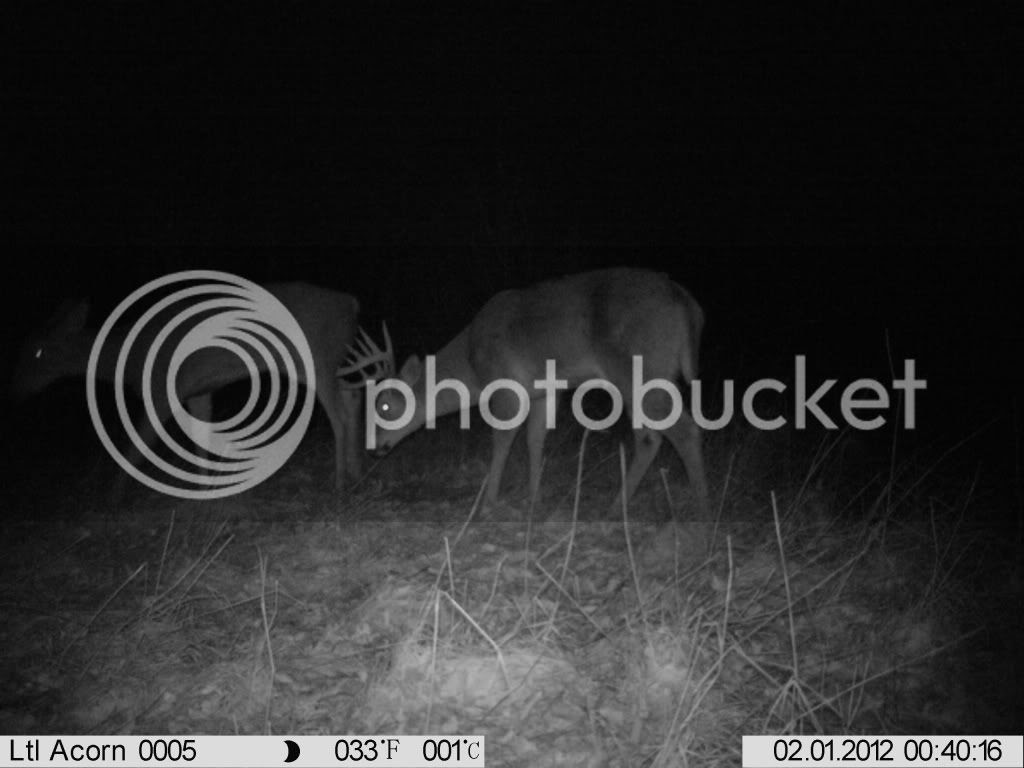 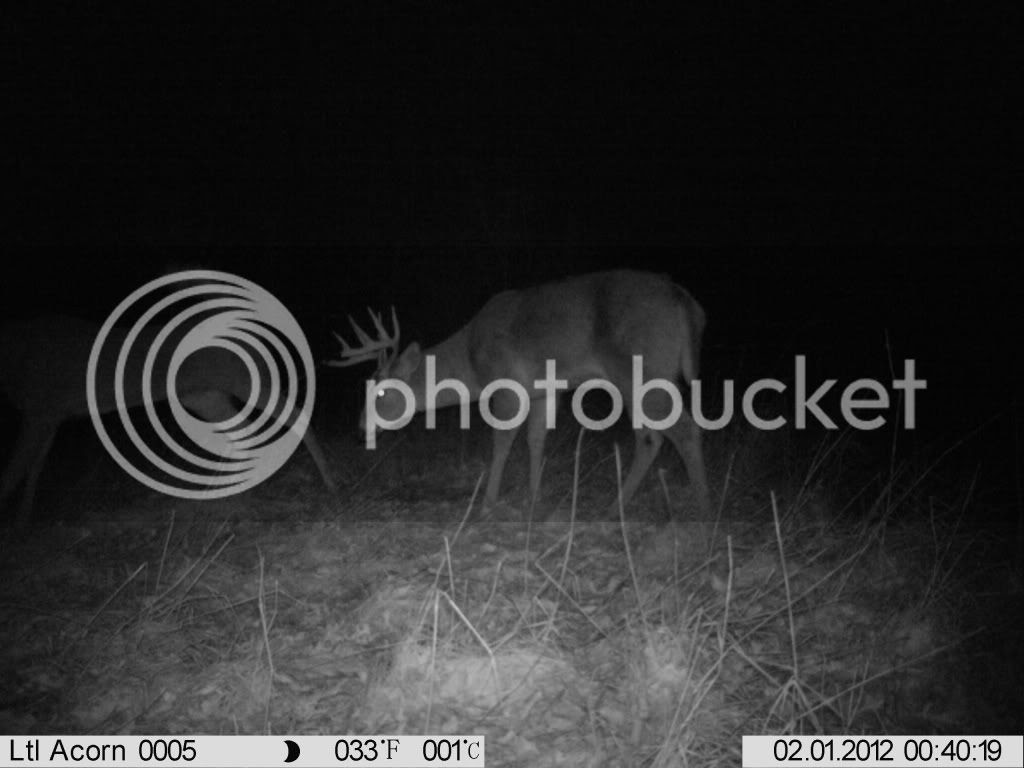 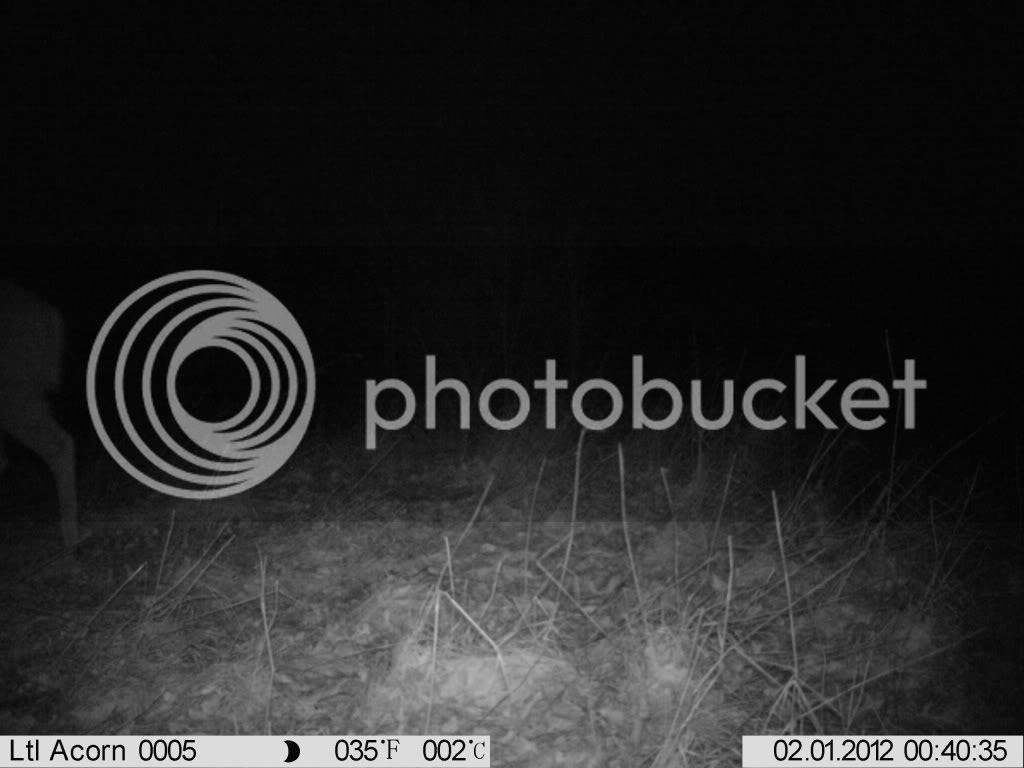 She comes back a bit later looking alittle "roughed up".  Not sure if actual copulation occurred....but an interesting example of late season breeding behavior, it would seem. 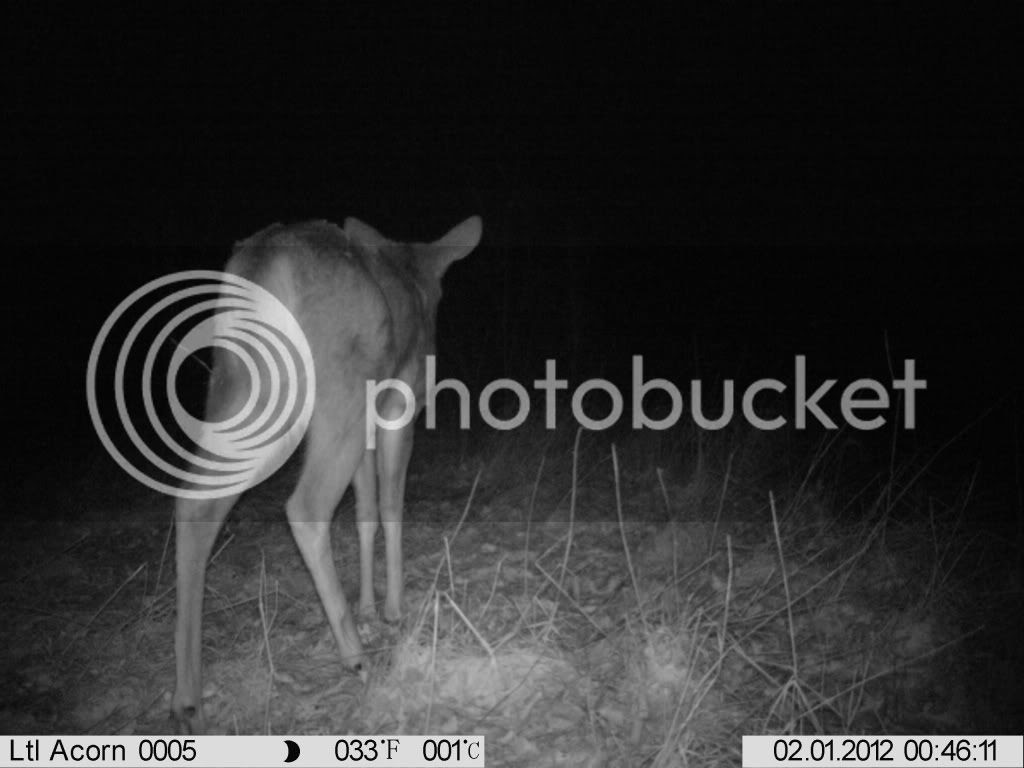 ﻿So, although it's mostly deer pictures these days, which can get alittle boring.....at least we're getting some interesting phenology and behavioral information.

Gordon, I. 1997. Controlled reproduction in horses, deer, and camelids. C.A.B. International, Volume 4. (note: I have not actually read this bit of literature...but I used a version of a figure from this article above).
Posted by Trailblazer at 9:13 PM