We live in the Badger State, afterall.

Bucky Badger has been elusive, though....and I certainly didn't expect to see him at this site.  He (or she) comes through rather quickly in the video clip below.  Clearly moving with a purpose....and I have not seen a Badger (Taxidea taxus) at this site since.

Then, several weeks later, the badger (or A badger) showed up at one of my cameras mounted on a property across a country road from the site where the video clip came from. 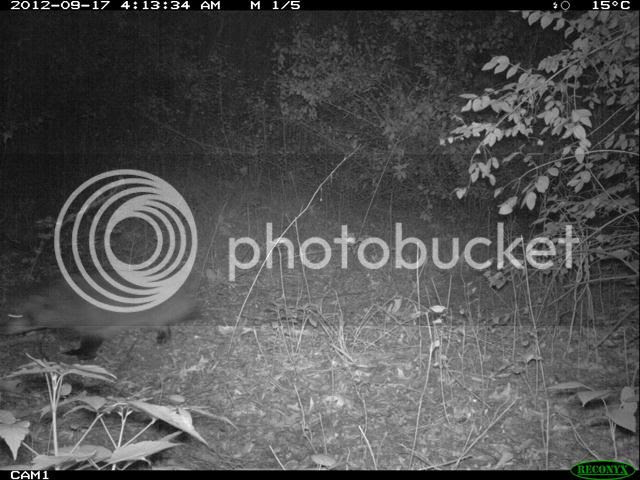 ﻿A fleeting shot.  But given the lightning fast trigger speed of the Reconyx, this one must have been burning through the woods for me only to catch a single blurry image of it.

Now, prior to these images, I had never seen a burrow on either of these sites that screamed "badger" to me.  And in 6 months to a year of camera trapping these properties, I never before got a photo of a badger.  So, I'm not certain if he's a resident or a transient.

Badger Movement- I had always thought badgers didn't move around alot and stayed near their borrows.  Yet, when I started doing alittle digging....I found this wasn't true!  For example, Sargeant and Warner (1972) followed an individual with radio telemetry and determined that, in the summer, she patrolled an area of 752 ha (2.9 mi-sq.) that contained 50 den locations.  Her home range size (or area she patrolled in a given time period) changed seasonally, however, and in fall she roamed an area of 52 ha (0.2 mi-sq.), while in the winter kept it to a 2 ha (0.007 mi-sq.) area.  Another study reported a home range size of 1700 ha (6.5 mi-sq.) in the summer (Lampe 1976)!!!  This individual's home range also decreased as the seasons progressed.  Males are the ones that apparently do most of the moving, and this has to do with the breeding season.  Long (2008) summarizes past research and reports that mating is usually in late summer/early fall and that females can remain in "heat" through the end of August.  This timing would correspond with when I got this picture and video clip.....so I'm going to assume this is a male on the hunt for ladies.

I wish we had gotten a better picture!  Recently, I've found some promising burrows on-site and I've had my students shift a camera over one.  When we last checked the burrow entrance (yesterday), it did not look as if there at been any fresh activity.  Unfortunately, we are heading out of the season for Badgers here.  Harlow (1981), who monitored Badgers in outdoor enclosures, observed a 93% decrease in activity above ground from November to February (and reported stretches of time where Badgers remained below-ground for up to 70 days!).

Lampe, R. 1976. Aspects of the predatory strategy of the North American Badger, Taxidea taxus. Ph.D. dissertation. University of Minnesota ant Minneapolis St. Paul. 103 pp. (NOTE: I did not obtain a copy of this dissertation, but included information summarized in other sources).