Winter is for mammals....but summer is for HERPS!!!!

I guess I should start at the beginning of the real herp field season this year....and it began with a field trip that I took my advanced ecology class on.  This is the same trip we took last year, although back then we didn't have much luck finding the cold-blooded crawly critters.

The conditions were alot better this year, so we pulled out of the parking lot with feelings of hopefullness a few weeks ago.

After nearly 2 hours in the car, we reached the first of our destinations: a sand prairie/savanna located immediately adjacent to a large river.  The part of the property where we were given access to is primarily used by a retriever club.  As a result, there was alot of more typical "grasses" that one might fing in a homeowner lawn.  As we moved further away from where the club operates, we ran into the results of recent habitat management.  These activities involved removal of some un-desirable/exotics: common buckthorn (Rhamnus cathartica) and Honeysuckle (Locinera sp.).  While it's good to get rid of these troublesome species of vegetation, it didn't provide great "herping" habitat..... 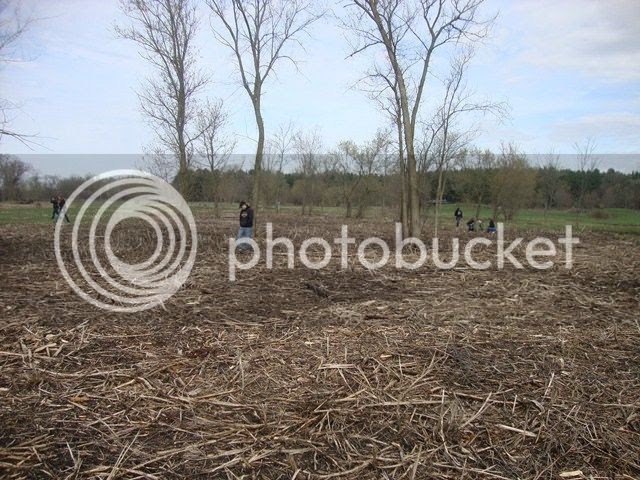 Yet, there were several pot-hole wetlands on site and lots of downed debris that the critters we wanted could be hiding in.  The morning was still a tad cool, but the sun was quickly warming things.  I felt confident we'd find something....

It wasn't long before....success!  One of my students called out that they found a snake... 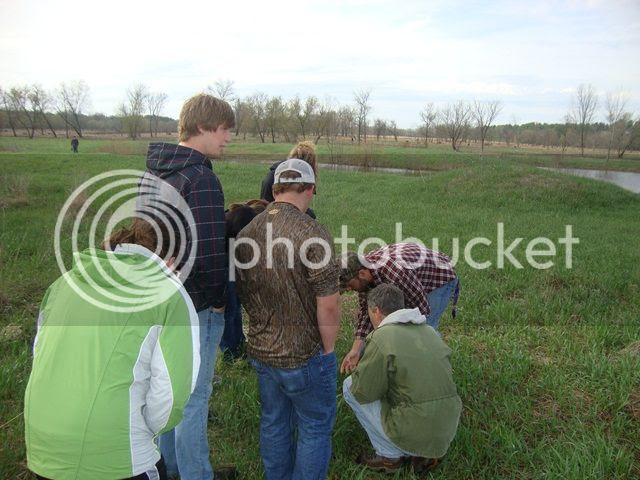 A small species, the Northern Brown (or Dekay's) Snake (Storeria dekayi).
﻿
Brownsnakes are highly fossorial (living below ground or ground debris) and rarely seen for that reason.  They are relatively common, however....but still a great find!

We also found several other species at this site: a Common Gartersnake (Thamnophis sirtalis), a Northern Leopard Frog (Lithobates pipiens), various birds, and some interesting plants (although this site was a tad disturbed for any really cool plants).

Next we headed towards a floodplain forest habitat along a major river in the state.  The primary objective here was salamanders and frogs, which require a bit of log-rolling (and "log-returning" after checking underneath).

So it was that we hopped out of the vehicles and plunged into the deer tick infested forest in search of sallies.... 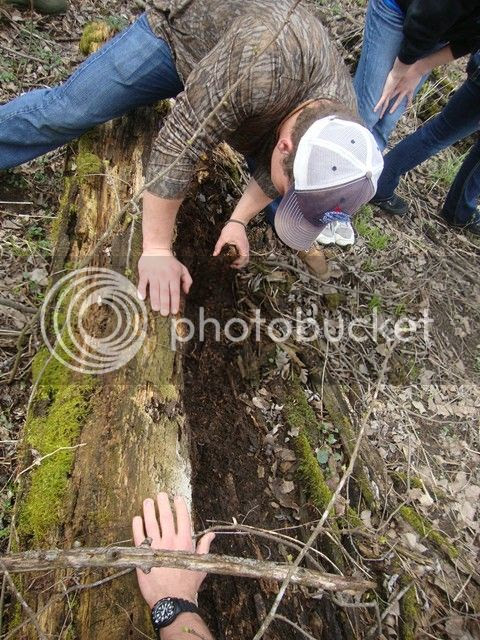 With 19 plus sets of boots on the ground, our chances of finding something were high.  It wasn't long before calls started going up that critters had been found.  The most commonly encountered was the cute little Blue-Spotted Salamander (Ambystoma laterale). Another commonly captured critter was the terrestrial phase of the Eastern Newt (Notophthalmus viridescens).  The one pictured below is employing an interesting anti-predation behavior.  I believe the goal is to make themselves too awkard for certain predators to swallow whole. 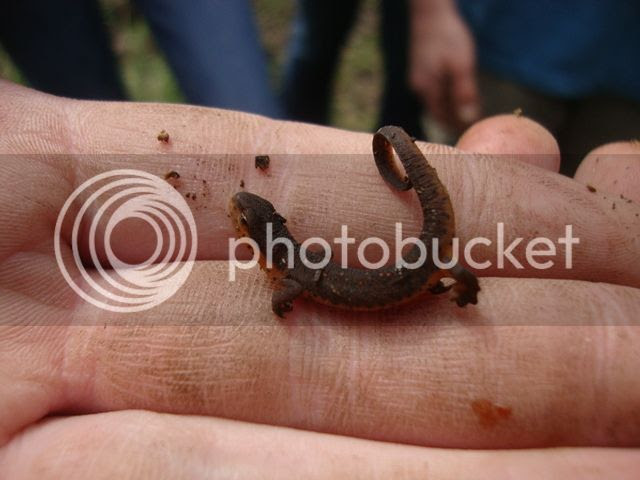 A variety of frogs were also hopping around in the forest.  This included the Wood Frog (Lithobates sylvatica), easily identifiable by it's coppery color and black mask..... 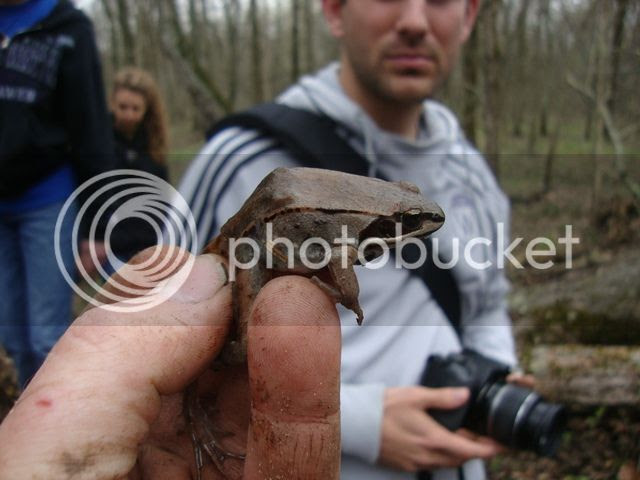 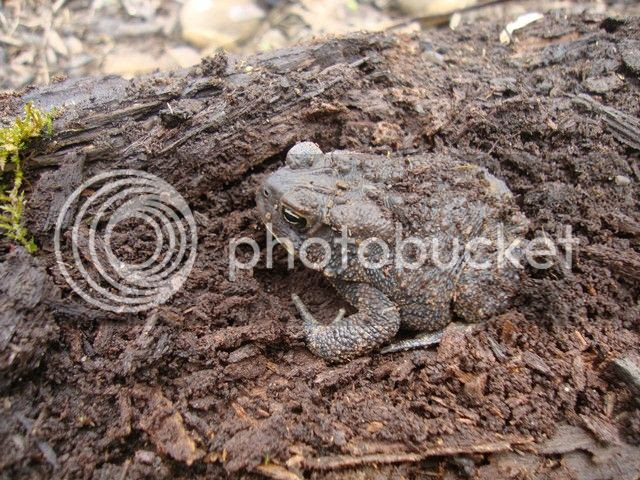 We hadn't seen many snakes so far.  If the rain kept up this way, we were sunk.

But...then...as we were finishing our meals and throwing away our trash...things changed.  The sun suddenly poked through, the clouds started to break....and I got excited as the air temperature began to climb.

So it was that our boots hit the ground at the next location.... 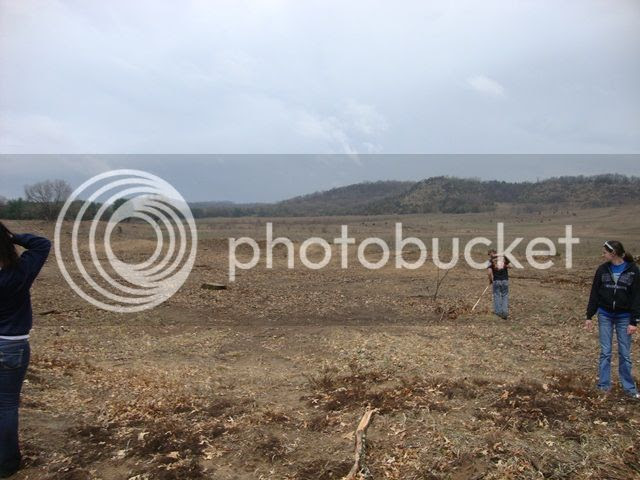 Although it was still a bit cloudy, the sun was peeking through occassionally and it became noticeably warmer.  Due to this positive change in the weather, it didn't take long for us to start catching things.

Within 20 minutes of arriving...one of the students yelled out:

I don't know if they heard me or not over the commotion, but when I got there, we had two nice Eastern Hognose Snakes (Heterodon platyrhinos) to admire! 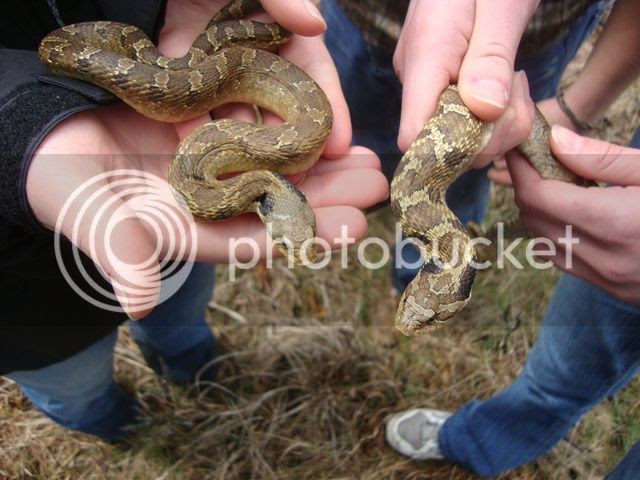 One was a very pretty orange-brown...... 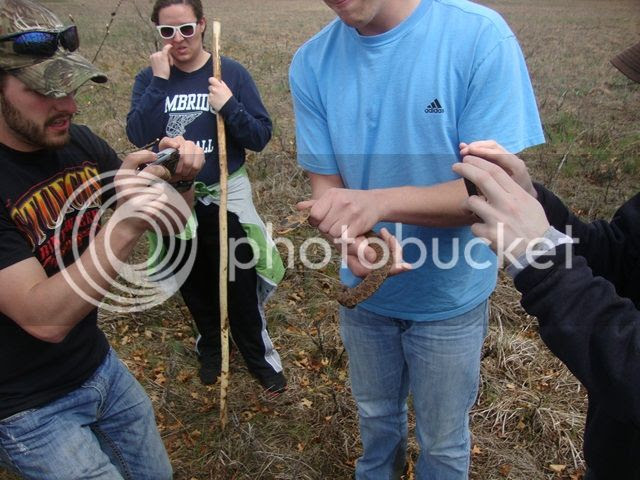 In total, we found four (or maybe even five?) Hognose Snakes in a matter of an hour.  Presumably, they were congregated in such a tight area for breeding....although we didn't actually see them doing so.

Next we moved to the north a bit, searching for some of the other critters that I knew were on-site. It was not long before we found one: the incredibly rare Ornate Box Turtle (Terrapene ornata).  The Ornate is the only fully-terrestrial turtle in the upper Midwest.  It generally requires deep, sandy soils to burrow below the frost-line in the winter.  Because such habitats have mostly been converted to agriculture or housing developments around here, this species has been nearly extirpated from the region.  In addition to habitat loss, herp-enthusiasts who collect them to keep as pets have severely impacted their populations.  Luckily, our fine state protects this species, and large fines can be incured for removing them from the wild.

Given how rare they are, it was encouraging to find a juvenile individual..... 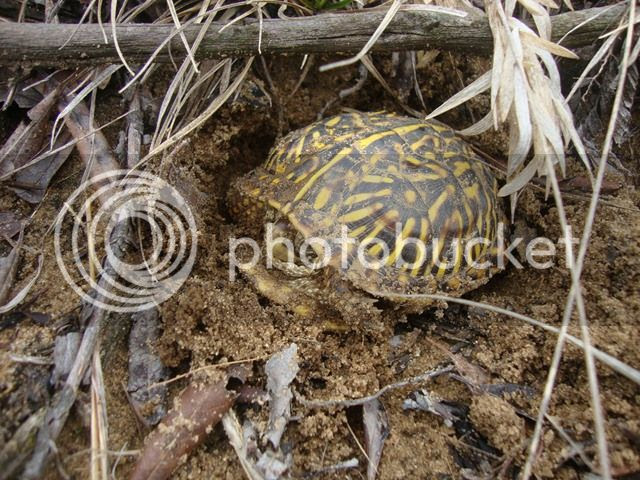 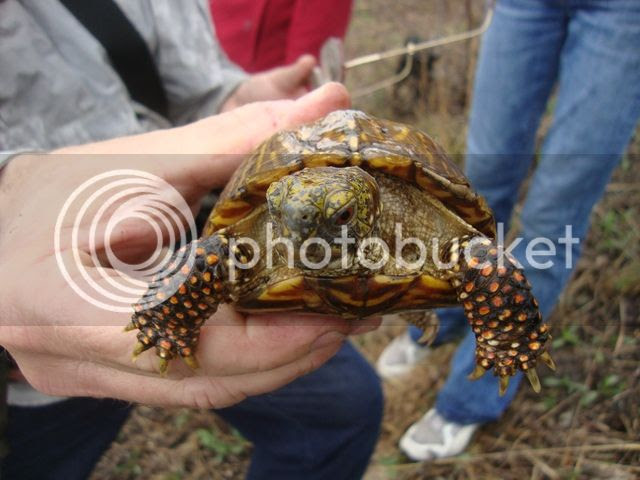 As we moved along, we found another rare species: the Racer (Coluber constrictor).
﻿
.....but we weren't done there!

A rare snake and a rare turtle....not to mention a few Hognose Snakes.  I was feeling pretty good about our trip, but not completely satisfied.  There were two other species that I knew were present, but we hadn't seen yet.  If we found only one of these, I decided that I would consider the day a success.

Luckily, the Herp-Gods smiled on us, and it was not long before we found one of the two sought-after species. 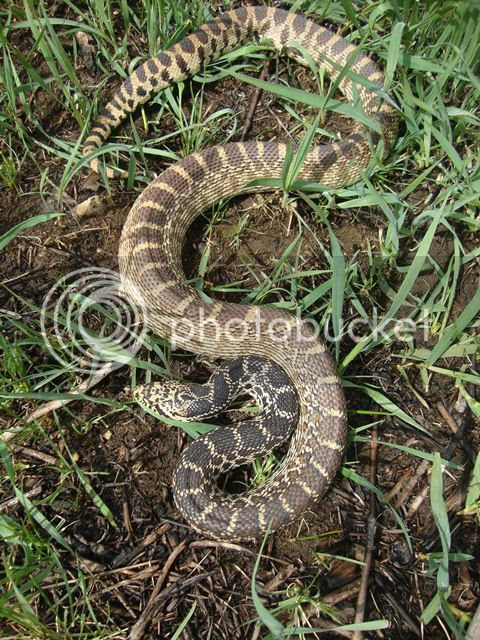 This one was polite enough for several of the students to get a chance at holding it.  Many of them were shocked that a snake species of this size lives in our region.  Unfortunately, this is another species that has been significantly (and negatively) impacted by the activities of humans.  The reasons run the gamut:  habitat loss is a key factor again....direct killing/persecution by folks afraid of snakes is another (to have such an unreasonable fear of something that you would kill it outright has never made much sense to me).  And...as with the poor Ornate Box Turtle....the Bullsnake has suffered greatly at the hands of collectors.  Unscrupulous "herp-enthusiasts" just can't resist bringing these back to keep in an aquarium....a damn shame, if you ask me.

It was not long after that when I heard more yelling "Doc! There's another big snake over here!".  Again, I yelled "grab it!", while running up towards the student waving his hands in the air. 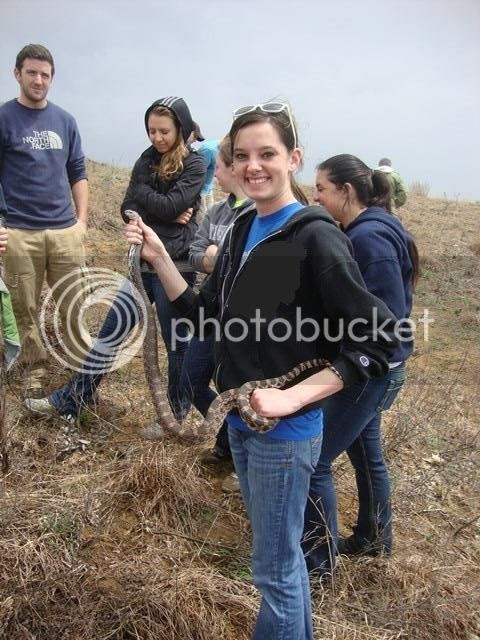 In total, we found five Bullsnakes!

Even the students that were alittle uncomfortable with snakes, at least sucked it up and held one (even without any chiding from me! :)  ). 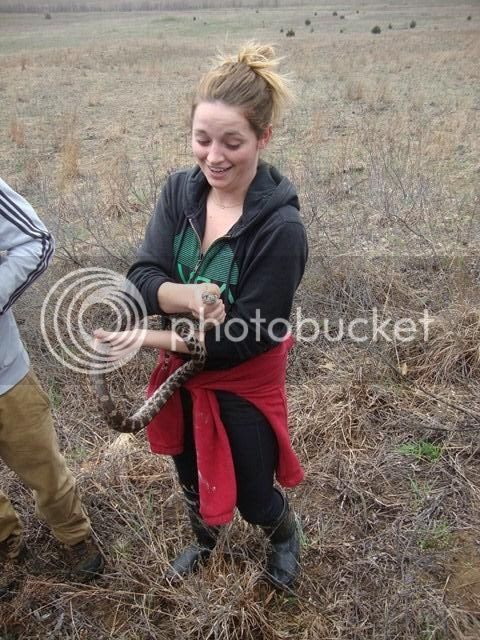 With every capture and encounter, they became more confident and several even grabbed the snakes without help. 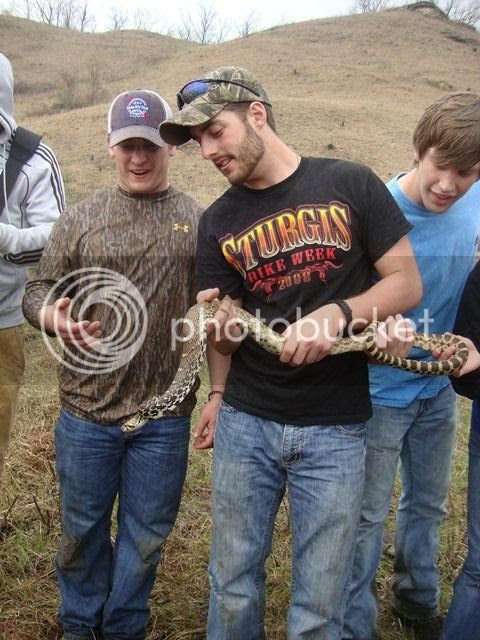 All-in-all, I'd say it was a very successfull trip!  Probably one of the most important achievements of this trip is that those who are afraid of snakes (hopefully) see them in a more positive light.  Snakes really aren't scary....heck, they aren't even aggressive, if you leave them be.  Every snake we encountered on this trip first made a mad-dash for escape...it was only after we started to "mess" with them that any took a defensive posture.   Some never even did that.

It also exposes younger folks to rare herps, and helps them understand the importance of conserving all components of an ecosystem....not just the furry/feathery charismatic ones....

I look forward to bringing a new crop of students on the trip again next year!
Posted by Trailblazer at 8:50 AM