Return of the Turtle Dogs!!

But, as a wiser man than myself once said: "It's better to be lucky than good".  Can't remember who actually said it....but I'm pretty sure I first heard it from my dad.

Anyways.....those of you that have read my blog from the beginning (a small group, to be sure :)  ) might remember my past adventures with John Rucker and his Turtle Dogs.  This was back in 2011, when I still lived in North Carolina.  After my experience with John, I raved about the Turtle Dogs to my colleagues who work for the regulatory agency in the state where I currently live.

Well, this apparently snow-balled until....lo-and-behold.....John and his Turtle Dogs were up here this spring helping the state wildlife folks with surveys.  This time, however, we were not looking for the Eastern Box Turtle (Terrapene carolina) from down in NC.  The goal this time was the incredibly rare, and protected Ornate Box Turtle (Terrapena ornata).

Turtles, in general, have it pretty rough.  They are slow to mature (taking decades in some species), they often experience reproductive failure (their nests are the focus of many mesopredators, like Raccoons, Skunks, Red Fox, Opossums); and even if the eggs survive, the hatchling turtles are bite-sized morsels for all of those same predators.  If anthropogenic influences were not a factor, being long-lived (and, thus, having many possible reproductive events possible in one's life) can help off-set high nest and juvenile mortality.  Yet, we no longer live in a land where anthropogenic influences can be avoided.  Habitat loss (particularly nesting habitat) have forced turtles to concentrate nesting activities in smaller and smaller suitable areas...where they are easy to find by mesopredators (who learn to return annually and can decimate a population's reproductive success).

One strategy to help off-set the low recruitment that many turtle populations experience is referred to as "head-starting".  Head-starting programs usually involve the harvesting of eggs from fresh turtle nests, the incubation of those eggs in captivity (so they avoid the nest-predators) and the eventual release of the hatchlings.  There are many pros and cons to head-starting of turtles that can be discussed.....but I feel this post is already growing a bit "wordy"...so we'll plunge on.

But, the strategy of head-starting turtles becomes important later in my post.

John and his dogs worked with state regulators for the better part of a week in early May, surveying various sites for turtles.  Trying to assess populations and re-confirm box turtle presence at some of these sites.  Another goal of the dog surveys was to catch as many previously head-started box turtles as possible.  The head-starting program for this species in the state was instigated about 12 years ago....and many of the first head-started individuals should be of (or near) sexual maturity.

The best part?  Well, my colleagues at the state agency agreed to allow myself and a number of my students come with for a day.  This was a rare opportunity: using a unique survey method to catch rare species.  We needed to be at the top of our game!

And, as usual, the weather was not on our side.....cold, windy and rain the night before.  Rain isn't good if you need dogs to follow a scent trail.  But...not much could be done about it.

We also planned on spending alot of time pounding the ground doing visual surveys for turtles that the dogs may have missed due to poor environmental conditions.

We were scheduled to meet the dogs et al., at about noon.....but decided to start early and survey a site without the aid of dogs to help supplement their later surveys.

So our boots were on the ground by 10 am, and we walked parallel to eachother across the survey area..... 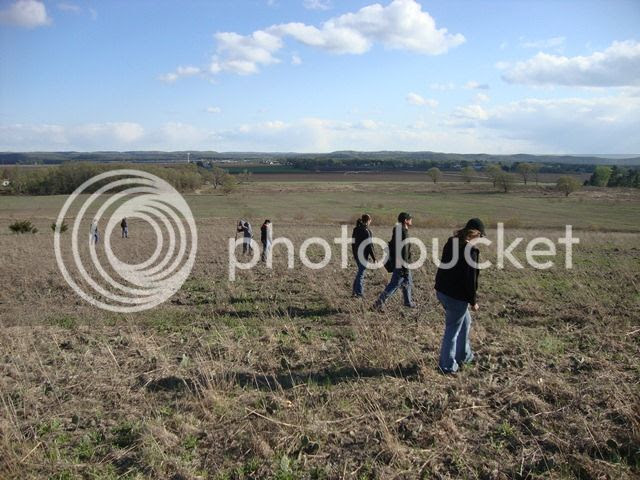 Luckily, the herps were still out, despite the cold....although we had to get on some steep slopes to find them (like this little box turtle). 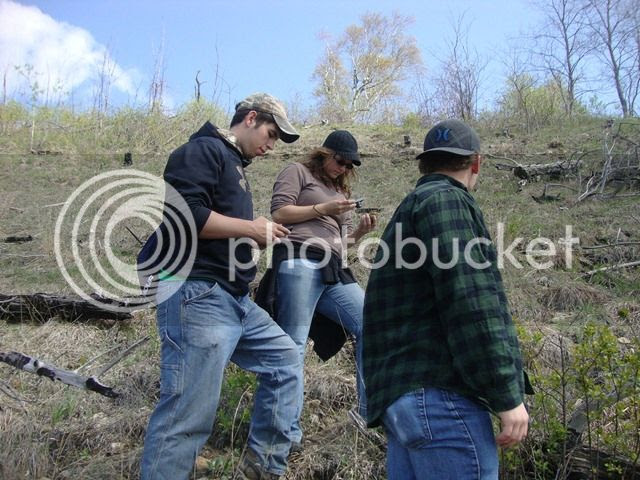 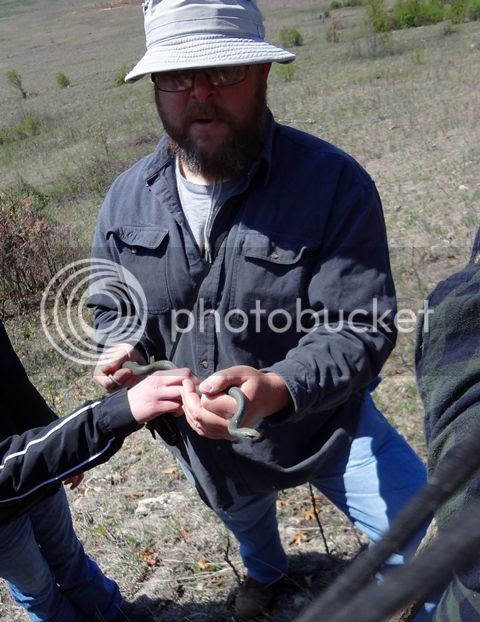 ...and even a beauty of a Bullsnake (Pituophis catenifer sayi)..... 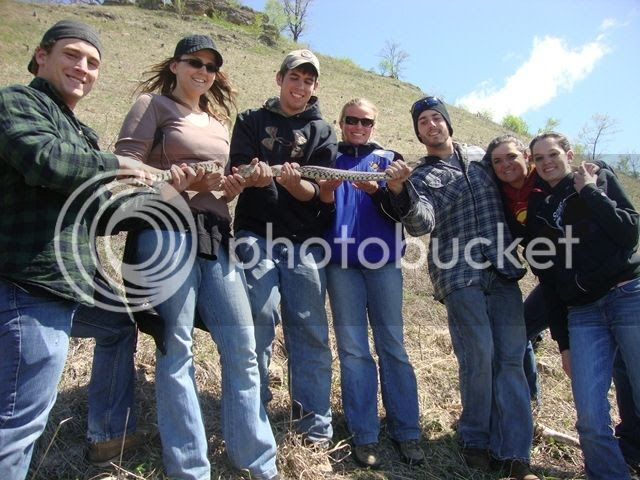 ...this individual was nice enough to let us "probe" him.  Allow me to explain (very breifly below). 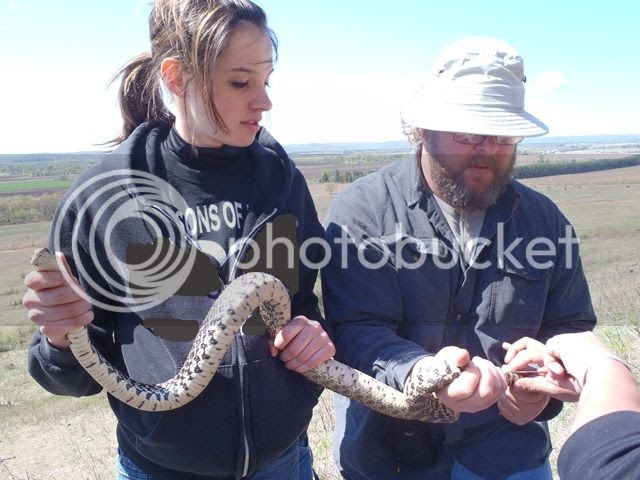 The most definitive way to determine gender on a snake is to take a smooth and blunt metal stick (called a probe).  This stick is very thin and can be inserted into the cloaca of a snake (the area where the snake goes to the bathroom out of; see pic above).  If the probe goes in a distance that is approximately 1/3 of the snake's tail length, it's a male.  Why?  Because males have a bifurcated reproductive structure (or a structure with two "halves") called a hemipenis located there.   The hemipenis is essentially everted into the cloaca of the female during copulation.  They are often spikey...to help the male get a grip (no arms or legs, remember) while sperm is transferred.  When males are not copulating, these hemipenes are inverted inside the base of the tail....it is the inverted hemipenis that accommodates the probe so that it slides into the cloaca.

If it's a female snake....the probe wont slide in.

ANYWAYS......our first visual survey was successfull.  Overall, we found five box turtles....one Bullsnake and a few Racers.  By then, it was time to leave so we could meet John and the state wildlife folks at a different site.

After our arrival, and general plan of attack was formulated, we headed out.  As a group, we hit the prairie, following John and the pooches as they went to work. 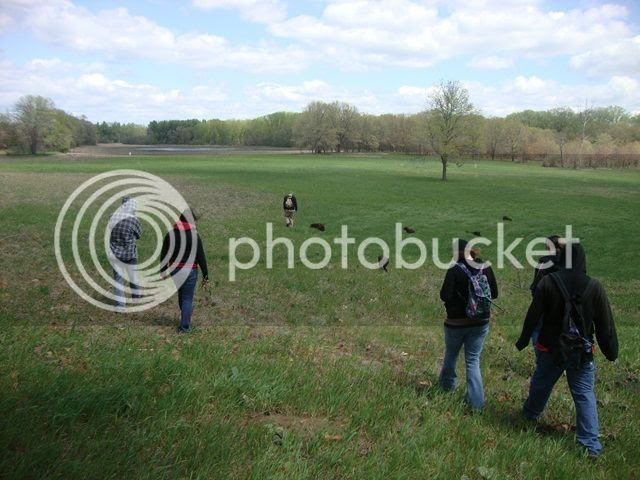 Part of our job was to supplement the dog surveys again with visual surveys.  The wet weather cold weather was hampering success.  Aside from affecting how long scent persists, the cold also meant the box turtles were probably not moving much (in other words, not leaving very long scent trails). 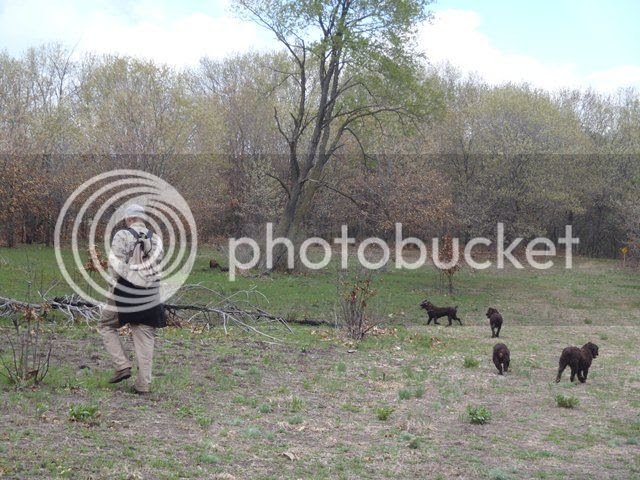 Yet, the dogs were happy and would not be deterred! 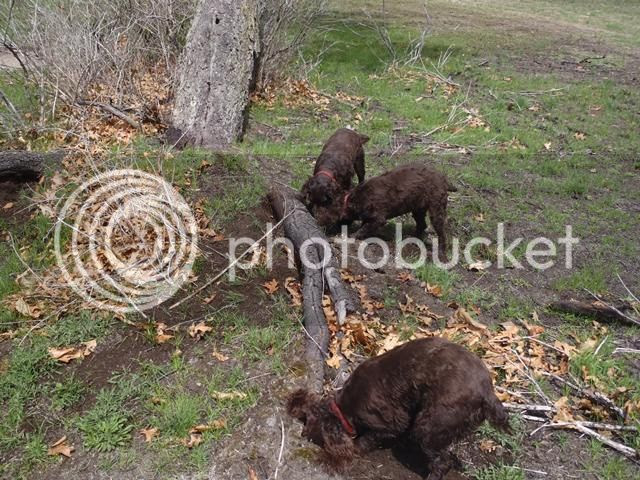 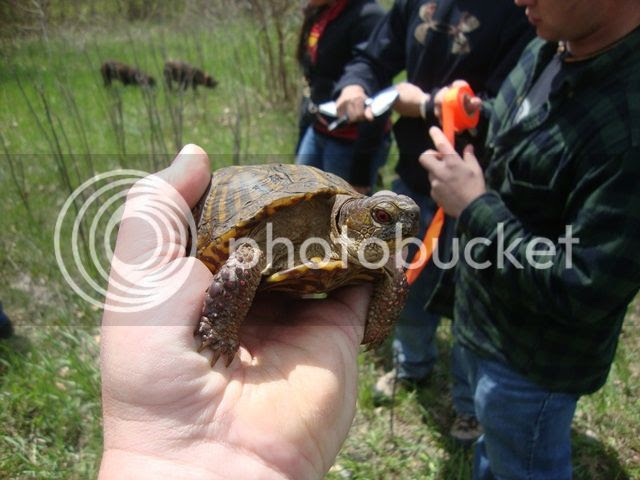 So...it was our turn to shine.  Every time a turtle was caught (via dogs or visually) our students were jumping to their tasks.  In addition to assisting with the visual surveys, the students were responsible for flagging the location of capture with a number, putting that number on the turtle with marker on duct tape, getting a GPS reading, and bringing the turtle back to "base camp" for later processing. 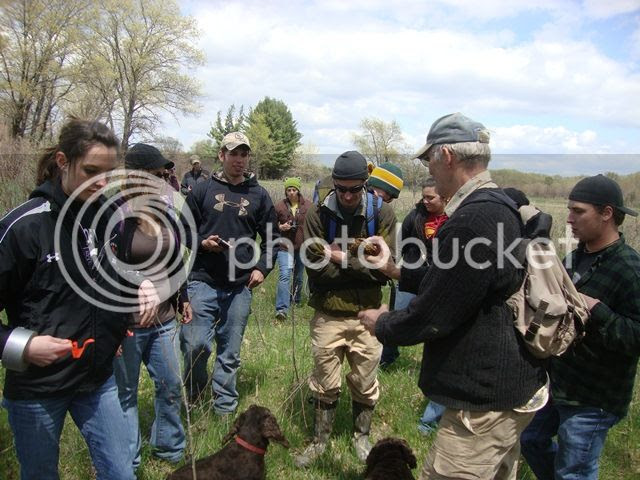 Once the first turtles were taken back for processing, we continued on-ward....looking for more turtles.... 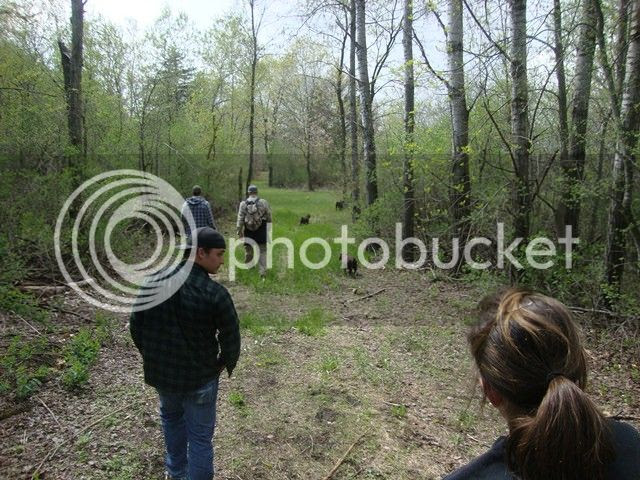 Although the dogs were successful, we had nearly equal success doing visual surveys as the dogs did that day.  This is was much different than what I experienced in NC, and really enforces the importance of environmental conditions in the success of the dogs.

Ultimately, between the dogs and our own prowess, we found a decent number of turtles across the sites we surveyed.
﻿

The students also got to see a nice adult Blanding's Turtle (Emydoidea blandingii) that just happened to be on the roadside as we entered one of the box turtle sites....
﻿
Blanding's turtlees are aquatic, unlike the Ornate Box Turtle, which is fully terrestrial (land-dwelling).  Yet, the Blanding's Turtle has a higher domed shell than most of the aquatic turtles that folks are familiar with, such as Painted Turtles (Chrysemys picta).  The Blanding's also has a bright yellow chin and yellow plastron (lower shell) with dark patches on each scute.
﻿
Both of these species are very rare in our neck of the woods.  Loss of habitat (prairie for the Ornate Box Turtle and wetland for the Blanding's Turtle) have greatly impaced both species.  Their very slow development and high nest/offspring mortality rate also works against them, as with the Ornate Box Turtle.  Blanding's Turtles, for example, can take nearly 20 years to reach sexual maturity!

So....the turtles were gathered up and the students helped in weighing, measuring and marking the turtles prior to their return... 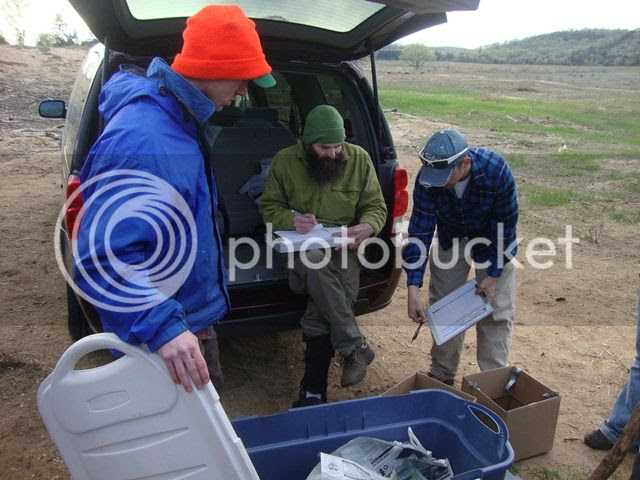 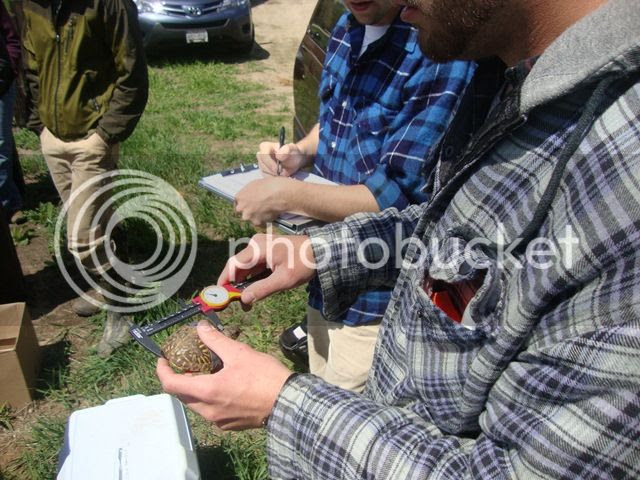 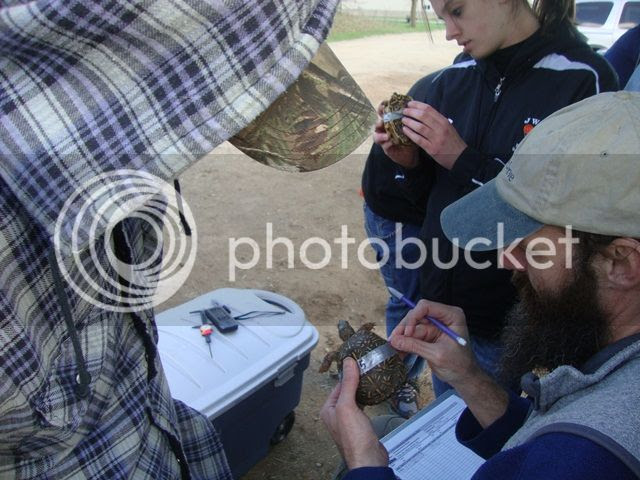 And, finally, the Pièce de résistance.....

One of the goals of these dog surveys was to assess how effective the headstarting program had been for the Box Turtles.  We were about 12 or 13 years post-initiation of this program in the state, which means that some of these headstarted individuals released at the beginning could now be sexually mature.

If it could be determined that some of the headstarted females were gravid (holding eggs), that would be a very good benchmark for success.

Luckily, the folks from a university further south were there with a portable ultra-sound unit to see if any of the gals might be carrying babies.... 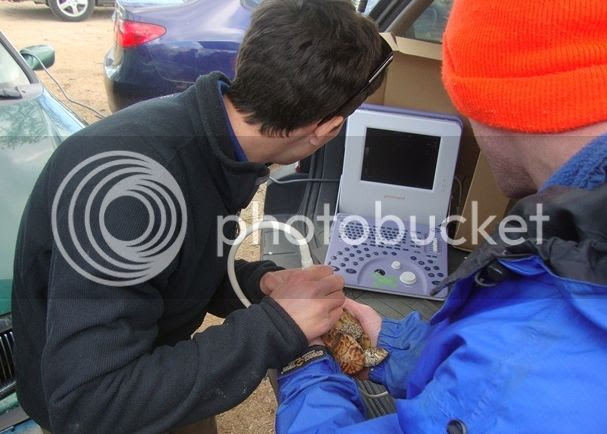 Now...while I don't want to give away all of the suprises....I will say that the gals examined with the ultra-sund looked to be carrying alittle extra baggage :)

And, so it was that our first day of turtle surveys ended.  The surveys were mostly successfull and my students made me very happy, by doing such a great job (the state regulators we were out with commented on this to me as well). 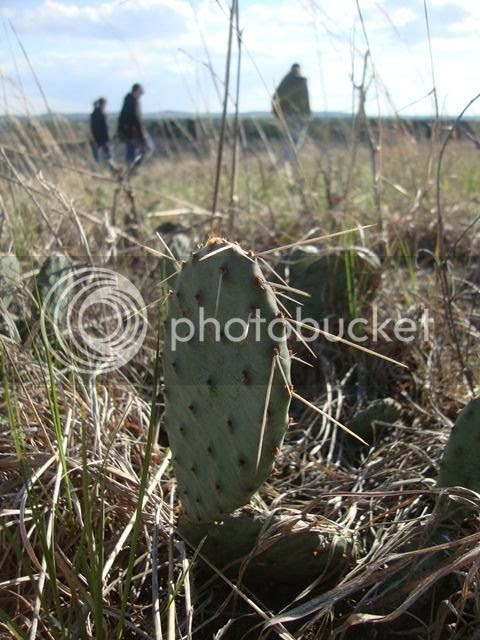 Posted by Trailblazer at 8:24 PM