This week, as we scoured the river banks for good tracks to make plaster casts of, we again checked on our otter latrine.

The otters are still using the latrine site that is down the bank and closer to the water (having all but abandoned the latrine on the upper bank where the camera is).

I debated moving the camera down to the new latrine.  However, seeing as there's a low-life camera thief about....and it would be hard to move it and not have it somewhat exposed....I'm reluctant.

Anyways, this week we noticed something new about our otter scat: some of the scat appears to be from offspring: its much smaller than the other scat deposited there recently, and smaller than any of the scat I've seen at that site before. 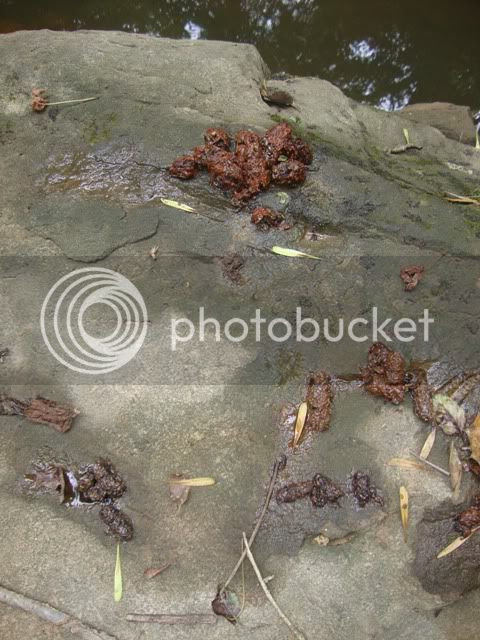 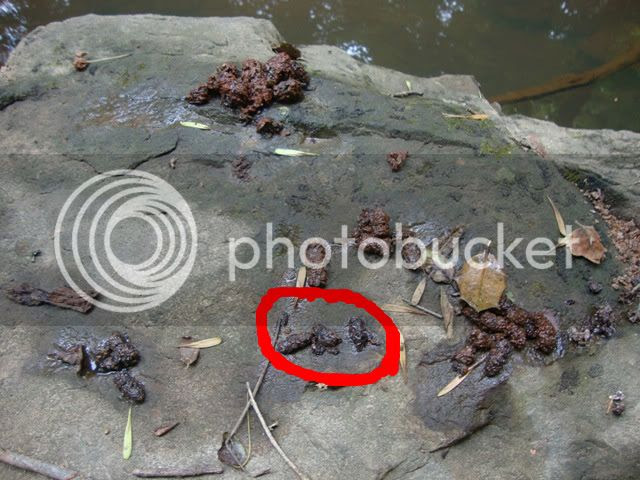 Above: Note the smaller scat that is now present (example circled in red).  Compare to the much large scat at the top of the picture.

I wish I could get pictures of the actual pups and not just their leavings......

I just don't think I can risk another camera to do it!﻿

According to Melquist et al. (2003) a significant amount of research has been conducted on the reproductive biology of River Otters.   One of the most interesting aspects of otter reproduction, in my opinion, is that they are capable of delayed implantation.  Many members of the Family Mustelidae (including several species of otter) are capable of this.  Delayed implantation is a phenomena by which the fertilized embryo does not immediately implant to the uterine wall.....instead it goes into a state of developmental dormancy.  This state of dormancy may last for extended periods of time (sometimes hundreds of days; reviewed by Melquist et al., 2003).  The advantage of delayed implantation is that the animal can then time implantation of the embryo, so that the energetically demanding action of being a pregnant female AND nursing newborn pups occurs at a time when resources are highest.  I'd say that's a pretty cool survival strategy!

Otters are also induced ovulators, unlike female white-tailed deer, coyotes, racoons, etc. who go into estrus at regular intervals (usually the same time each year)..which is called spontaneous ovulation.  For River Otters, the act of copulation with a male causes the female's ova to be released for fertilization.  This strategy is also similar to that of many felines (such as African Lions), who are also often induced ovulators.

Parturiation (i.e. birth) dates vary for this species, and range from January to May, depending on geographic location, and litter size varies from 1 to 6 pups (reviewed by Melquist et al., 2003).