A Hunter in the Dark.

We've seen Gray Treefrogs (Hyla versicolor) around the house on many occassions since arriving in the upper Midwest.

On our first day in the new place, I stepped out on the back porch to look at the air conditioning unit and saw one sitting on the deck.  I grabbed the little frog, and much to my daughter's delight, brought it in for her to see.

After that, encountering them became an almost daily occurrence.  Once, I opened the umbrella over our patio table and a little treefrog fell out.  On another occassion, I lifted up a watering can to find one of the little critters hiding beneath.  They also frequently end up on our sliding glass patio doors hunting insects at night.  On many nights, I've glanced over while banging away on the computer to see one of these little predators deftly ambushing moths that are attracted to the light shinning through.  They pay little attention to me, even when I stand and scrutinize them closely through the glass.  I vividly recall seeing them on the windows of my grandparents' house as a kid doing the exact same thing as I watch them doing now.  Perhaps I associate fond childhood memories with this species, which "ups the cool ante" on them.

Even as I type this entry, I'm watching one maneuver his way around the transparent dinner table that is our patio door.  I've seen him miss one moth and nab another so far.  And all with the typical panache that this little amphibian exhudes every time I see one.  They seem to have personality to burn, if one were to anthropomorphize.

I know they must be generally successful at hunting around our place, for I frequently find their scat, filled with chitinous insect parts and stuck to the the walls and windows.  The numbers of insects one individual treefrog consumes in a summer must be substantial.

I'm thrilled to see this species.  It's one of my favorites.  I've posted about my encounters in North Carolina with a very closely related species: the Cope's Gray Treefrog (Hyla chrysoscelis; see here and here).

I hope they hang around my windows for many years to come. 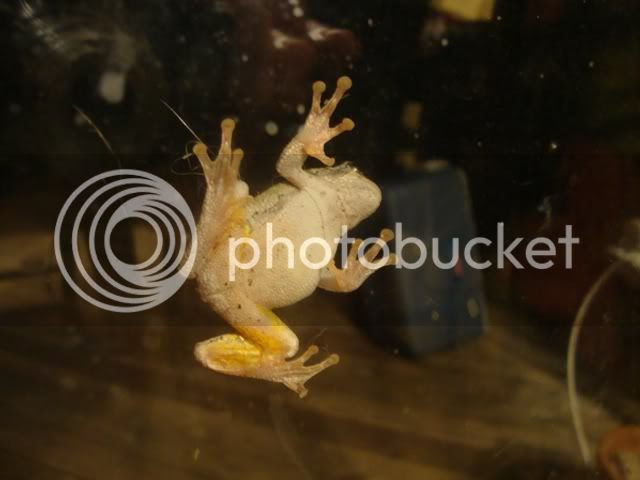 Posted by Trailblazer at 8:17 PM