Another Good Day For Herps (i.e., Amphibians and Reptiles)! 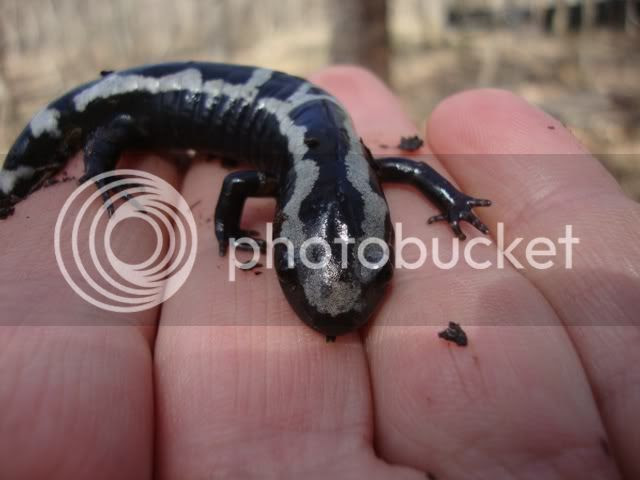 I put the clarification in the title as to what a "herp" is....just in case folks not familiar with this word mistakenly thought my post had something to do with an S.T.D.  I thought about this after my post from yesterday (A Good Day for Herps, posted on March 23, 2011).

So...to re-interate....a "herp" is a generic term for amphibians and reptiles (the study of these critters is called Herpetology).  Whereas a "herpe" is something you'll never read about on this blog.

Yesterday, I posted about my first good haul of captures in my survey equipment this year (drift fences and coverboards).  The scaly and slimy goodness continued today, much to my happiness!

We had several massive thunderstorms blow through the area last night.  I was hoping the rain would stimulate some amphibians to move around alittle...and they did!

But, let me start with my drift fence capture from yesterday (as promised in my last post).  This one was in the "pitfall" trap along one of the fences I have in an upland deciduous forest.  I have one pitfall trap associated with each drift fence.  It consists of a 5-gallon bucket dug into the ground so the lip of the bucket is flush with the surface of the dirt.  The fence then leads critters to the bucket and they fall in.  It's a live trap. 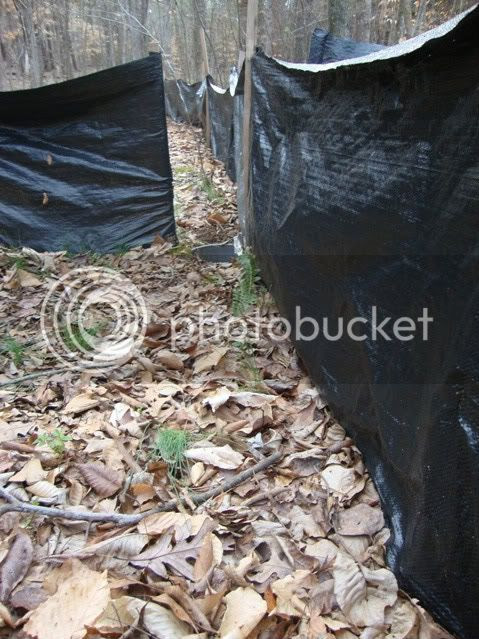 Above: the drift fence leading up to the pitfall trap
The volunteer yesterday was a nice little wormsnake (Carphophis amoenus).  These critters were a common occurrence in the drift fences last year.  They must exist in large abundances in dry/mesic upland forests in our region.  Despite this, there is relatively little known about these docile little snakes.  In fact, that I know of, there are only five manuscripts that have studied the ecology of these critters in any depth (Aldridge and Metter 1979, Clark 1970, Fitch 1999, Russell and Hanlin 1999, Wilson and Dorcas 2004).  The reason why they have been the subject of so few rigorous ecological research projects is probably becuase they are small, secretive and fossorial (i.e. below ground). They're not easy to find without the use of specific survey equipment.

The wormsnake is easy to identify.  Their dorsal (upper) surface is brownish-red, with sleek scales.  Their ventral (lower) surface is often rosy or pinkish in color.  The head is very small (likely becuase they eat primarily soft-bodied invertebrates, such as worms), as are the eyes. 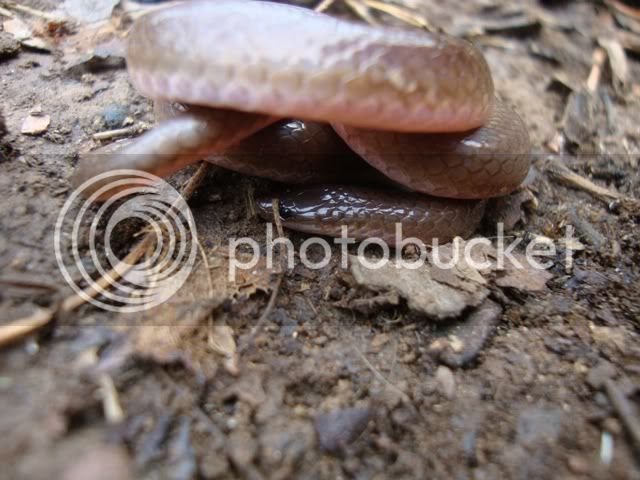 Above: the small head and eyes of the wormsnake, buried beneath its coils.
The most unique character is the hardened, pointed tail-tip (sometimes called a "tail spine").  They often press this tail tip into the hand of anyone that attempts to restrain them.  This defensive behavior is almost laughable, as it causes no discomfort whatsoever to a human.  However, perhaps it is effective against other smaller predators that may threatened these snakes in the leaf litter of the forest floor. 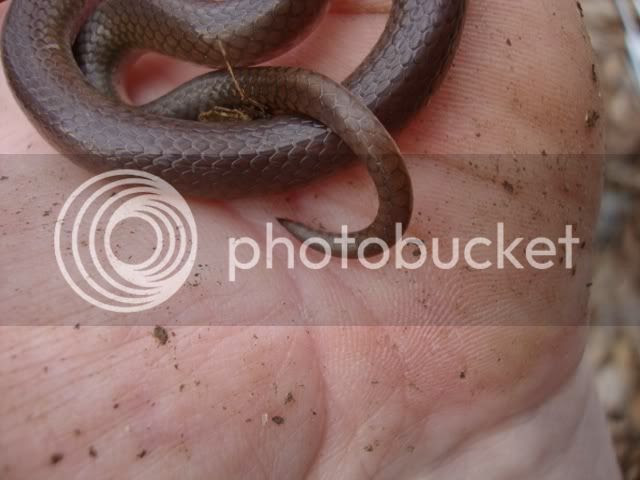 Above: the hardened "tail spine" of the wormsnake.
Behavioral observations of this species are uncommon.  However, some unique anecdotal reports exist in the literature regarding their defensive behaviors.  Pressing the "tail spine" into the hand of a would-be captor is the most commonly reported defense.  Kapfer and Slone (In Press) also report a bizzare bit of defensive behavior involving an individual that partially buried the front 3/4 of it's body in leaves, lifted its exposed tail and wagged it's tail in a serpentine fashion.  In addition, Diefenbacher and Pauley (2009) observed an individual hiding its head beneath it's coils, while holding the tip of it's tail vertically.  The assumption is that the head is buried in the coils and the tail is presented to the predator in the hopes that the tail tip is focused on, rather than the head.  In theory, a predator damaging the animal's head is more likely to result in death than if the predator focuses on the tail.  I  don't know how effective this defense mechanism is.....I don't see many wormsnakes with damaged tails.

I had never seen this head-hiding behavior before.

In any event, while trying to photograph the wormsnake I caught yesterday, it presented me with half of the defensive behavior reported by Diefenbacher and Pauley, it hid its head beneath its coils (it didn't raise its tail in a vertical position, however).  When I would touch the snake in the hopes of repositioning it for a better picture, it would bury its head further into it's coils.  Eventually, I gave up....took a picture of the "headless" snake, buried it under some leaves nearby and went on about my business. 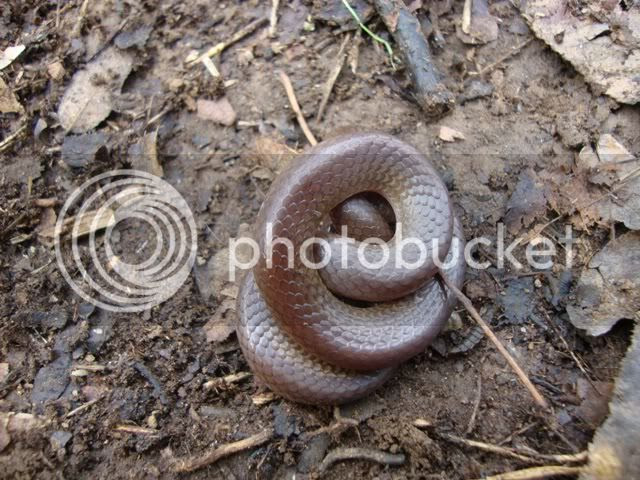 So the wormsnake was all I got in my drift fences yesterday.  Yesterday was the day for coverboards being effective.

Today, it was just the opposite.  The coverboards yeilded nothing, but the drift fences were crawling (literally).  The massive lightning storm we had last night (and associated rain) may have gave the salamanders under the coverboards the moisture they needed to mosey along to some nice subteranean refuge.

So...I'll go through some of the highlights from the drift fences today.

The first captured critter I encountered today was in one of my grassland drift fences: the Common Gartersnake (Thamnophis sirtalis).  I captured two individuals in the same fence.  One in one of my wooden box traps and the other in a funnel trap. 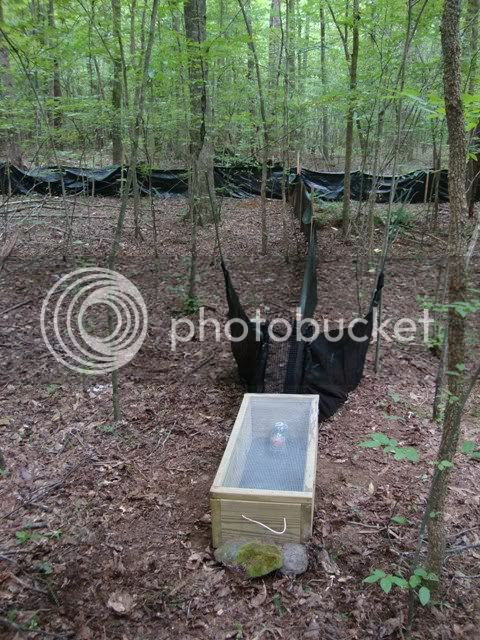 Above: box trap associated with a woodland drift fence 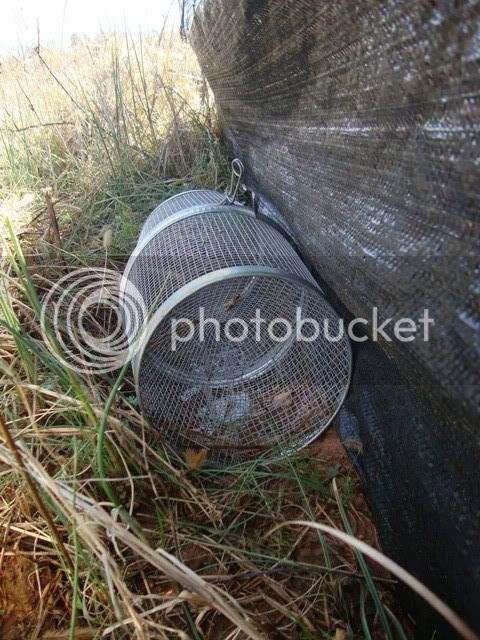 Above: a funnel trap placed along a woodland drift fence
So, the first gartersnake was found in one of the box traps.  The heavy rain had lead to a drop in temperature, and it was cooler this morning.  The snake wasn't moving very fast and I was able to snap a shot of him in the box (normally they are shooting out as soon as its open!).
﻿ 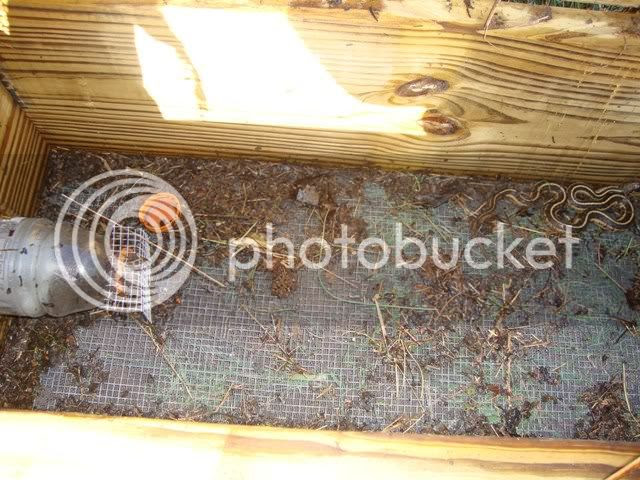 Above: my first encounter of the day, a common gartersnake (Thamnophis sirtalis) in a box trap 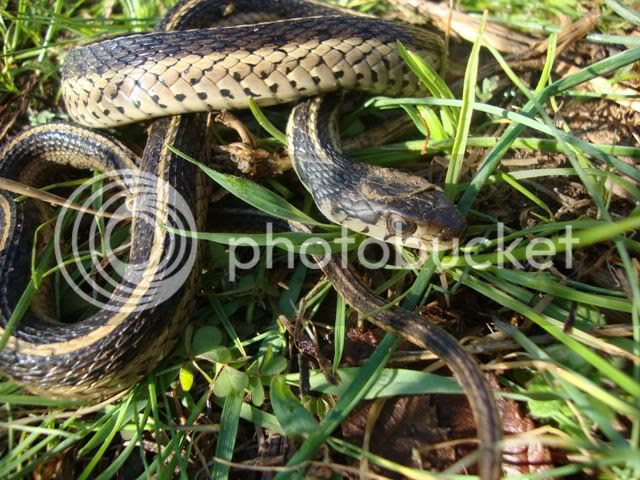 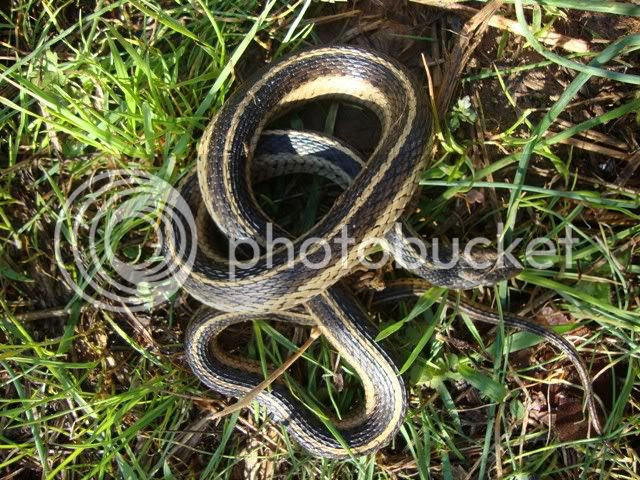 Above: two pictures of a Common Gartersnake (Thamnophis sirtalis) captured in a drift fence.
Common Gartersnakes are....well......common.﻿  They are probably the most commonly encountered snake throughout the eastern and midwestern USA. We even caught them in huge numbers back home in Wisconsin.  They can withstand human disturbance, they are very general in their habitat needs and diet.  So, I'm not shocked to have caught them today.
But that doesn't mean it isn't always a treat to catch snakes!
________________________________________________________________
I next moved into check some of my woodland drift fences and was in for a treat.  One of my favorite native frogs was waiting for me in a funnel trap: Cope's Gray Treefrog (Hyla chrososcelis).  Cope's Gray Treefrogs are another species that I was familiar with from my work in Wisconsin (although there it is less common than the related (and very similar) Gray Treefrog (Hyla versicolor).  In fact, these two species are so similar they can only be easily differentiated by hearing the call of the breeding male for each species.  While the call for both is a quick trill, the Gray Treefrog's trill is more bird-like and melodic....whereas the Cope's Gray Treefrog has a trill that sounds more like an insect, almost sounding like a flourished buzz.
There is another definitive way to distinguish these two frogs, but it is much more cumbersome: counting chromosomes.  The Gray Treefrog is a tetraploid, and has double the chromosomes (48) of a Cope's Gray Treefrog, which is a diploid.
Not many people are going to go to this extreme, however!  I've only ever heard Cope's Gray treefrogs calling in our area...so I'm going to assume that's what I caught (I forget my portable chromosome analyzer in the car most of the time, anyways ;) ).
Regardless of all that jazz....one thing is for certain: they are cute as heck! 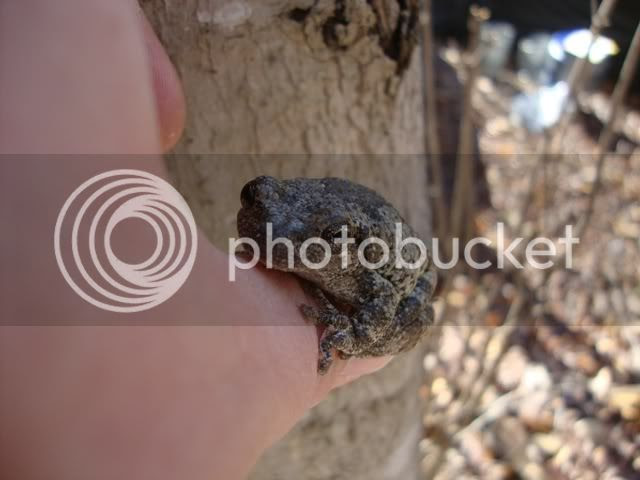 Above: note the obvious toe pads. They can climb up sheer surfaces and the toes feel sticky to the touch! 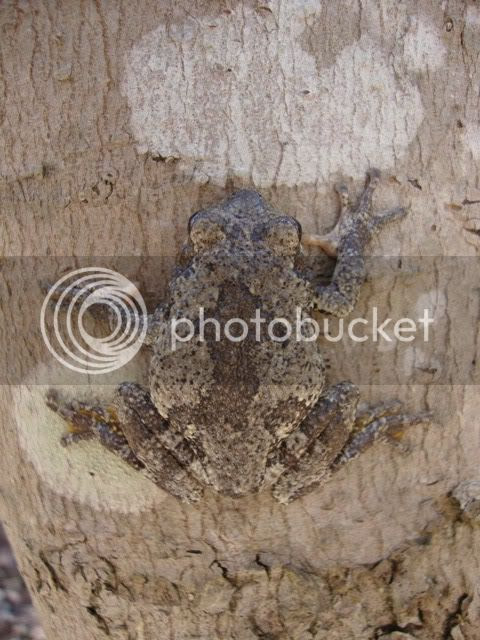 Above: Talk about camoflauge! 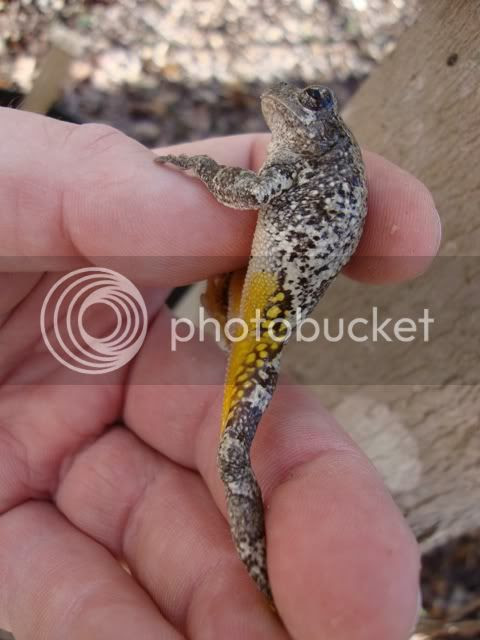 Above: the yellow in the groin upper thigh region is typical of H. chrososcelis and H. versicolor.
__________________________________________________________________
So after finishing up my work at the first study site, I moved on to site two.  Starting with the grassland drift fence, as I had did at Site 1.  Again, I was in for another treat!
You may recall that yesterday, I found a juvenile Racer under one of the coverboards (which I mentioned was patterned, unlike the adults).
Today I captured a large adult Racer (Coluber constrictor) in a funnel trap.  Now you can see how the juveniles and adults differ in their appearance.  The adults are a beautiful sleek black, with white chins. 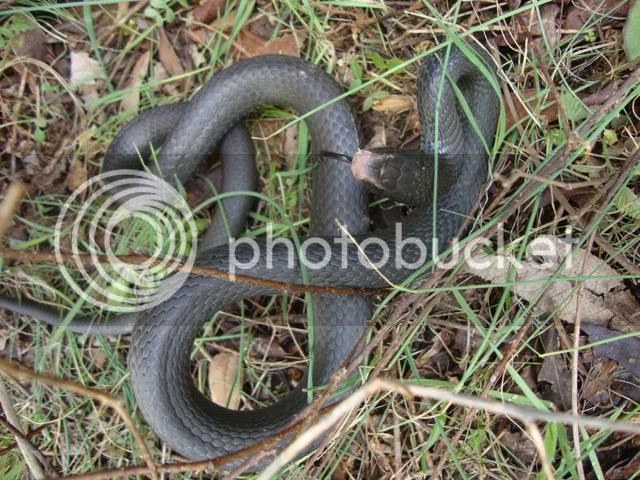 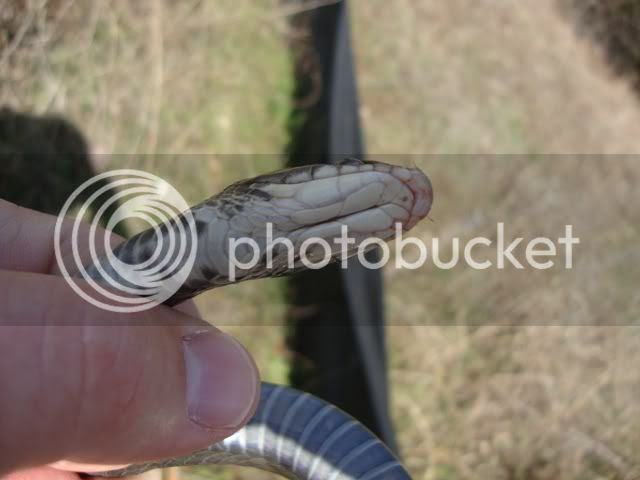 They also can be alittle nippy! 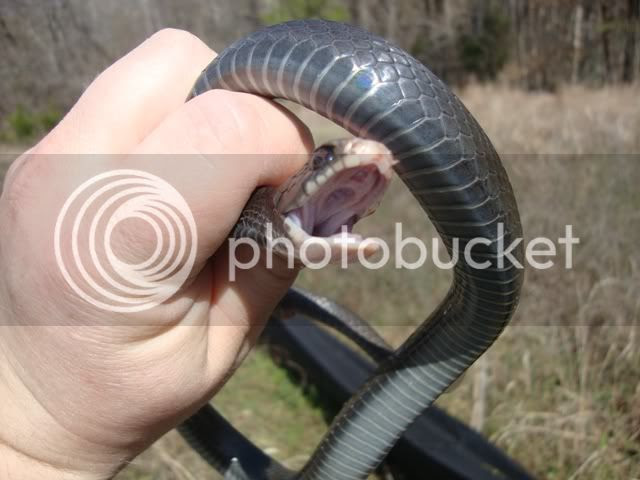 ﻿Interestingly, after I set it on the ground and harrassed it for a while (trying to position it for a good picture, while dodging it's angry mouth)....it went through the same head-hiding behavior that the wormsnake did yesterday.  In fact, it was so committed to protecting it's head, that I was able to pick up my gear and prepare to move on for a good three minutes and the snake remained in that pose for the entire time.  I eventually had to move it off into bushes for fear a hawk would nail the snake if I left it where it was. 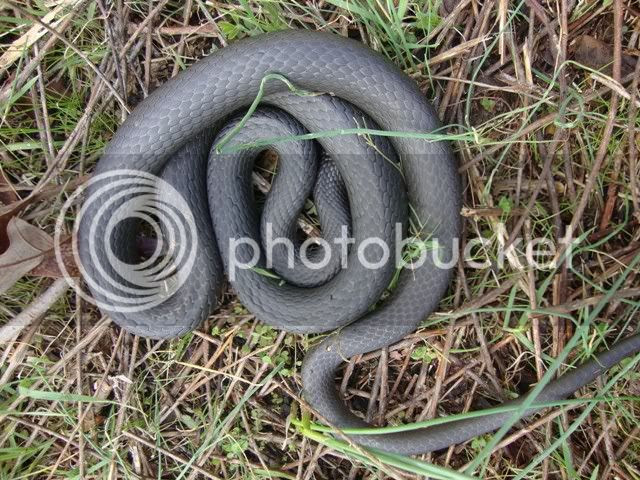 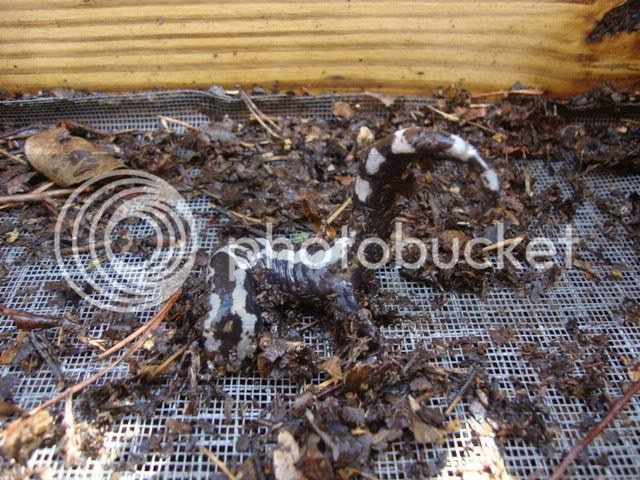 Above: a Marbled Salamander exhibiting defensive posture.
This defensive posturing is cool as heck!  As soon as I touched the salamander, it instinctively rose it's tail and dug its head into the ground (well, as much as it could in this box trap).  What this accomplishes is (1) protecting and hiding the head, making it less of a target and (2) focusing the predator's attention on the tail.  This makes alot more sense for the salamander than it does the wormsnake because, unlike the wormsnake's tail, the salamander's tail would make a particularly undesirable meal﻿.  When harrassed further, the salamander secretes a whitish substance from glands on its tail.  This secretion is incredibly sticky (it will even cause your fingers to stick together for a few seconds).  The secretion is also noxious.  Brodie et al. (1979) found it will deter a common woodland floor predator: the shrew.
So, the sally protects its head, while presenting a foul, sticky tail.  Brilliant! 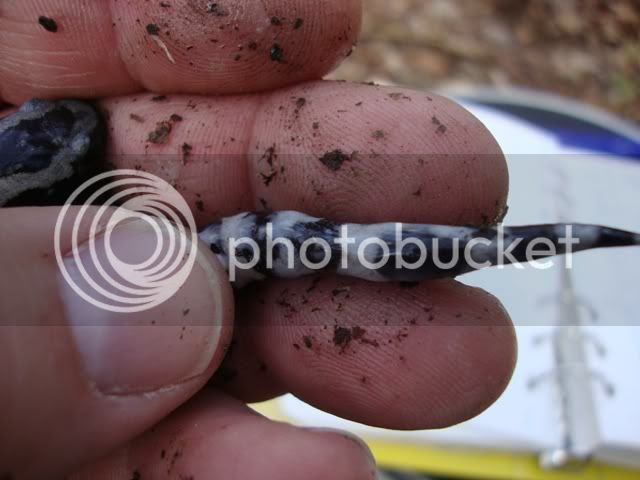 Above: whitish secretions from glands on the salamander's tail 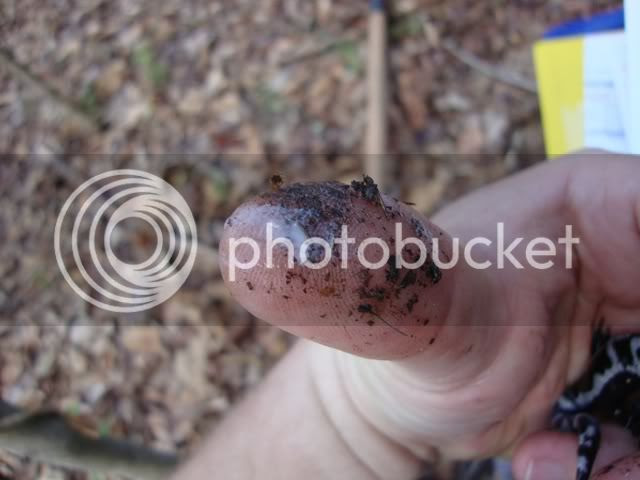 Above: the salamander's sticky secretion on my thumb! 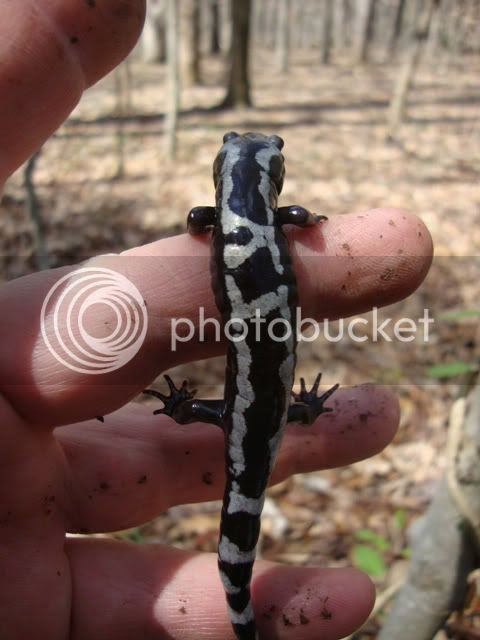