The Raccoon (Procyon lotor) is the carnivore I most commonly capture on my camera traps.  In some cases, I've gotten literally hundreds of raccoon pictures on one camera in a month!  With spring in the air and warm weather setting in here, raccoons have become incredibly active.  I'm sure they are thrilled at the fact that the early breeding frogs (such as the upland chorus frog and the spring peeper) are calling at wetlands in full-force.  The frogs likely represent an easy and concentrated source of food for these clever (and mischievious) little critters!

Spring also brings about an important time of year for the raccoon: the breeding season, which is often reported to occur in "late winter/early spring".  This time of year also, apparently, brings out conflict.

The pictures below outline a raccoon "fight" as it unfolds.

The disagreement apparently begins over occupation of a tree. 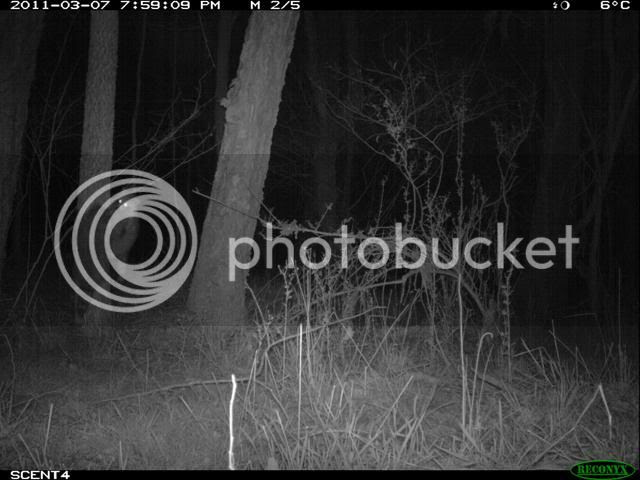 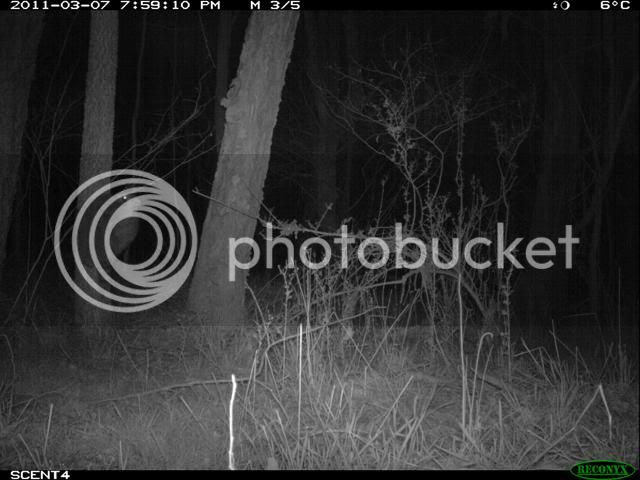 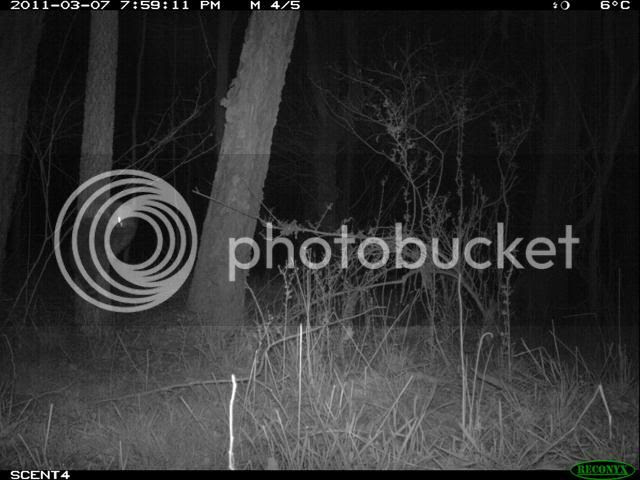 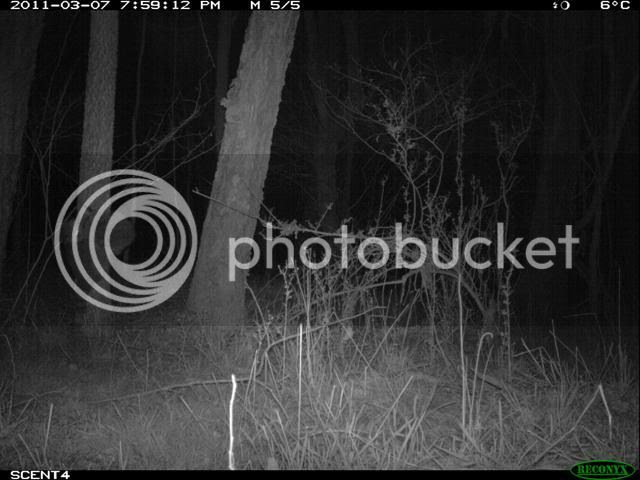 Their tussle soon moves to the forest floor, with no sign of abatement. 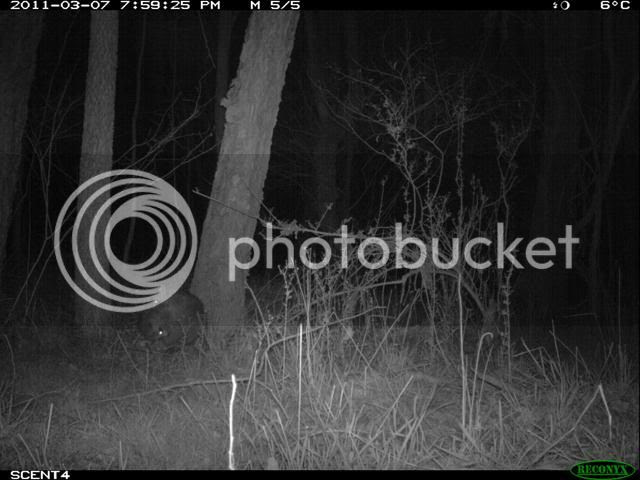 Having enough, one individual appears to try and escape up a tree...but is denied!﻿ 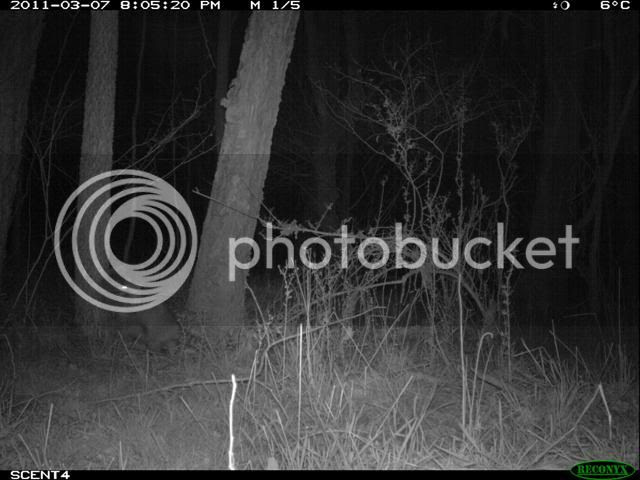 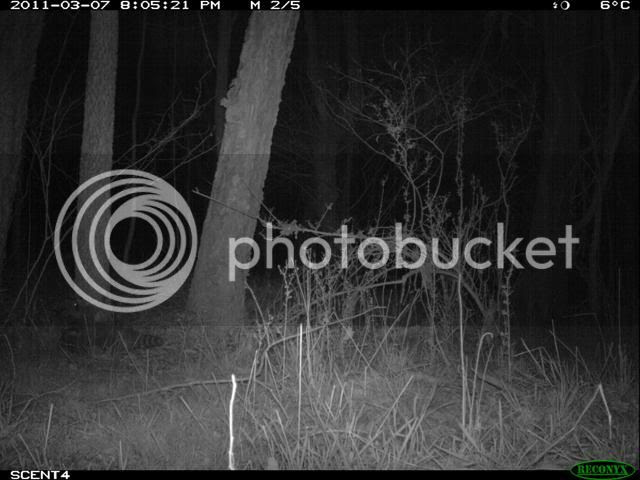 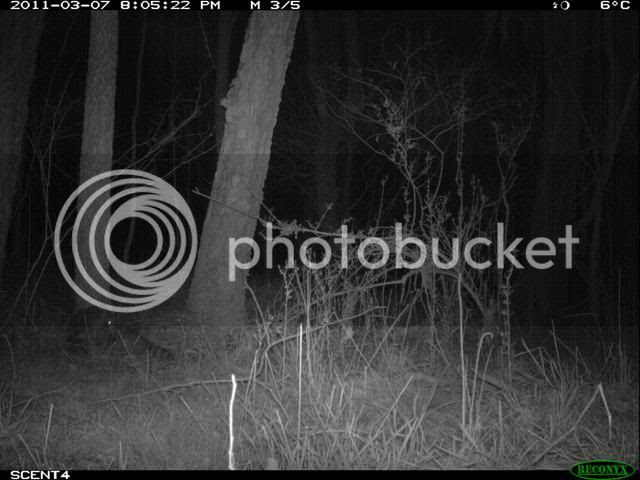 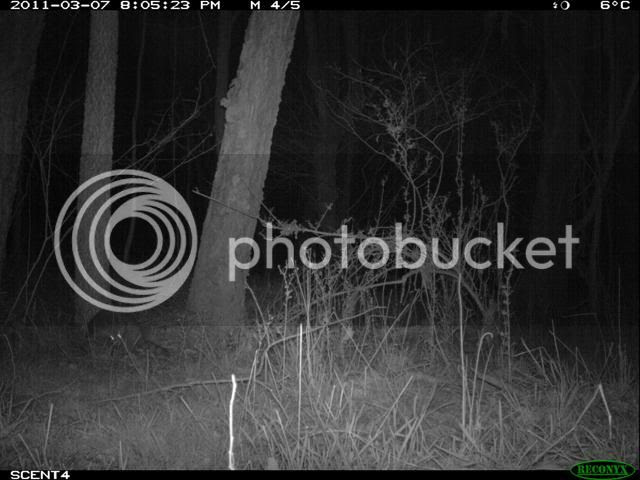 Shortly, thereafter, the two raccoons roll out of view.  A few seconds pass before a single raccoon appears to leave the scene (I didn't post a picture of that).

Anyways, I have no idea for certain what this behavior was associated with.

Information on social organization in raccoons seems to vary.  For example, Jackson in his classic Mammals of Wisconsin, published in 1961 (now out-of-print) refers to the raccoon as "socially inclined" and "somewhat gregarious".  Hadidian et al. (2010) report raccoons are often described as being "solitary", which they mention may be due to their nocturnal behavior as opposed to social intolerance.  Individuals often have overlapping home ranges (i.e., areas they patrol throughout their active period).  Related individuals will also apparently occupy the landscape somewhat close to eachother (although not directly interacting with one another that often).   Futhermore, offspring remain with their mothers for extended periods of time while growing.  However, Johnson (1970) and Fritzell (1978) report evidence to support strong intolerance and even territoriality among raccoons existing at low population densities.

Because the study site where these pictures were taken certainly does not have a low population density (raccoons are EVERYWHERE, it seems)....I'm assuming that this interaction is not social intolerance or territoriality.  But...to be fair....that's a HUGE assumption on my part.

Perhaps, then it is related to the breeding season.  Is breeding a rather "vigorous", perhaps prickly, endeavor among raccoons?  It appears that *might* be the case in the pictures taken below.  Not long before the above pictures were taken....a nearby camera took the following shots of a raccoon pair caught in the act.  They are on the left side of the field of view (look for the eyeshine).  In this series of events, the female doesn't sit still for the male to complete his job (or so it appears).  In fact, she keeps on moving and carries him out of the camera's field of view. 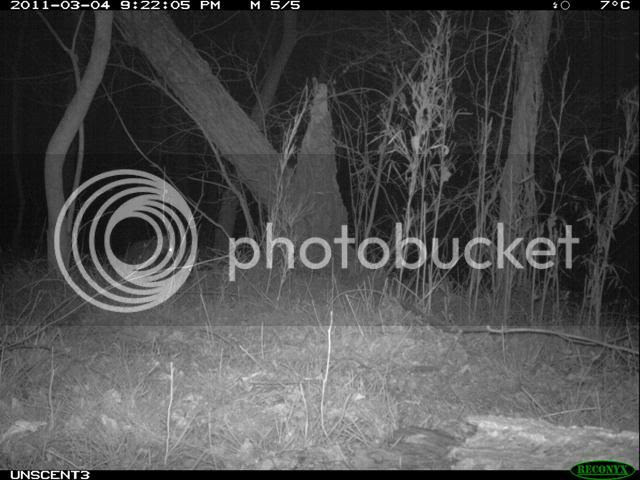 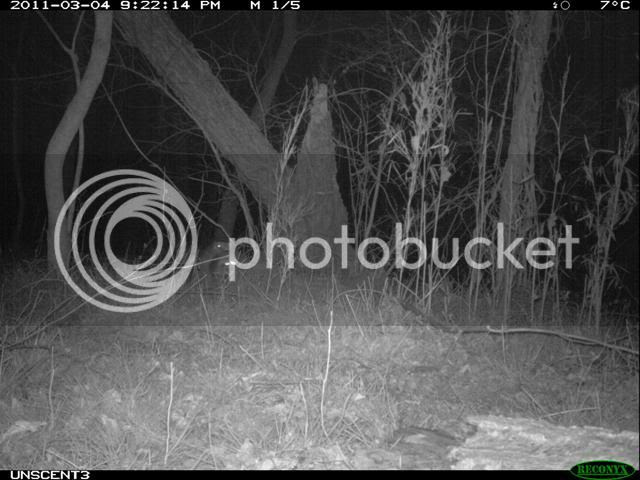 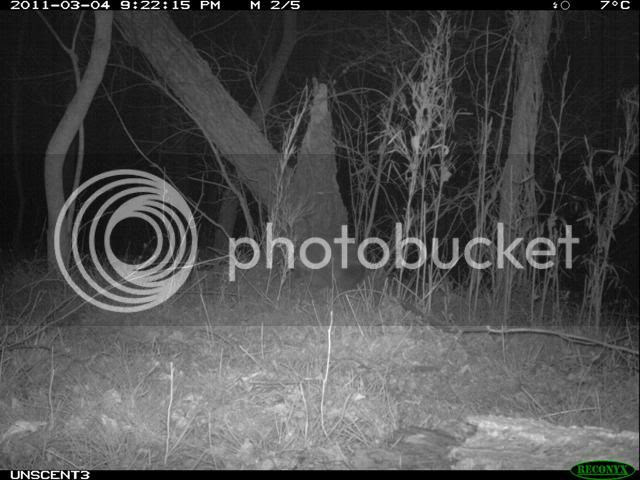 Whether this is the result of a typical fiesty raccoon mating bout, or perhaps this female is just unreceptive, who knows.  Maybe the first set of pics above is actually a lover's spat?  Pehaps it is two males quarrelling over the right to breed?  It's also *possible* that one of these individuals is rabid, which is prompting it to attack the other (the incidence of rabies in raccoons in this part of the country is reportedly high).

Or maybe it's just a good ol' fashion raccoon fight!

Notes on Raccoon Breeding Habits (as summarized by Long, 2008):
Raccoons are typically able to breed in their first year, but some wait until their second year depending on the weather conditions.  Females usually have one litter a year, although occassionally two litters are possible.  Most breeding occurs in late winter/early spring (February and March), and after a gestation period of roughly 60 days, birthing occurs.

Long, C.A. 2008. The Wild Mammals of Wisconsin. Publication No. 56 of the Museum of Natural History, University of Wisconsin-Stevens Point, Reports on the Flora and Fauna.
Posted by Trailblazer at 1:02 PM