Gray Fox at the Stink Pole 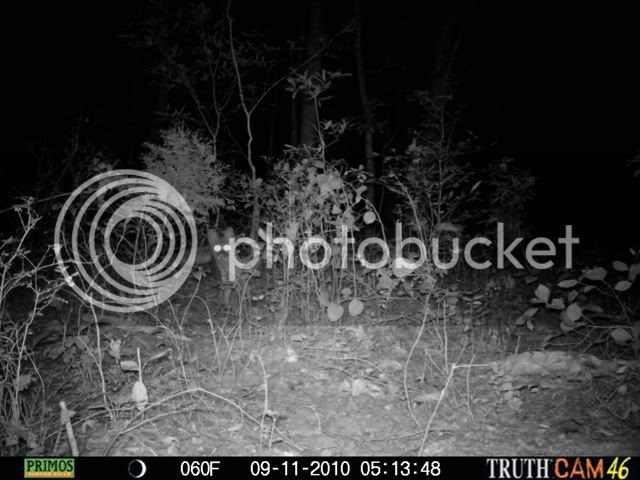 Well, we finally deployed our drift fence traps and engaged them for the first time on Wednesday.

Also, nothing under the coverboards.

Despite the fact that we had gotten a brief warm up and rain over the weekend, the temperature dropped this week.

During the day it's been in the 50s and 60s....but at night is a different story.  I checked the temperature when I woke up this morning and it had dipped down to 27.

So, no new herp-related stuff to share, which means I'll continue to regale you with mammals and camera traps.

Last fall, after a summer of no carnivore activity (aside from raccoons and oppossums), I started getting alittle antsy.   I wanted to see some fox or 'yotes, or something.  The 'yotes did show eventually (see here: Coyote Cams, posted Feb 19, 2011), but it was the gray fox (Urocyon cinereoargenteneus) that first decided to play ball (although it took alittle bit of persuading).

In mid-September 2010, I set one of my cameras along a small wooded stream.  The stream ran parrallel to a game trail (the stream is on the left of the field of view in the picture above, and the game trail is on the right).  I placed the camera in between these two, hoping something would cross from the stream to the game trail and vice-versa.

At first, I baited the camera with an open can of dog-food that I buried about 3-4 inches.  I also added a drip of my secret weapon to a stick that I placed on the soil: skunk essence!  Something about it draws in the critters.

My first glimpse of a carnivore was actually a gray fox...but it was just a glimpse.  The animal really was not interested in getting right up to the bait, and although he came close, he never really gave in to temptation.  Perhaps it was the red LEDs that glow when this camera takes a photo at night?  Perhaps it was the noise that the IR filter on the camera makes when taking a picture?  Who knows?

He's difficult to see in the picture below, but he's there..... 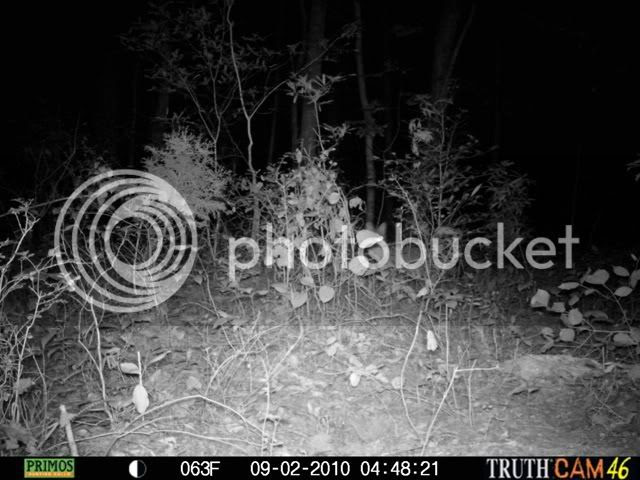 Not long after his appearance, a steady string of raccoons finally dug up the can of bait and removed it to an undisclosed location.

The gray fox, however wary at first, appeared to acclimate to the camera enough to return.  The thought of a potential meal, coupled with curiosity, must have brought him back.

First, he stuck his nose in the empty hole left by the removal of the dog food can. 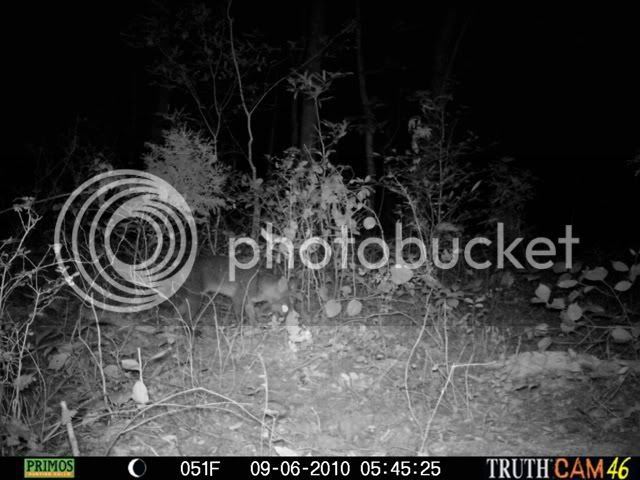 When nothing presented itself, he took a second to roll in that good ol' skunky stink!﻿ 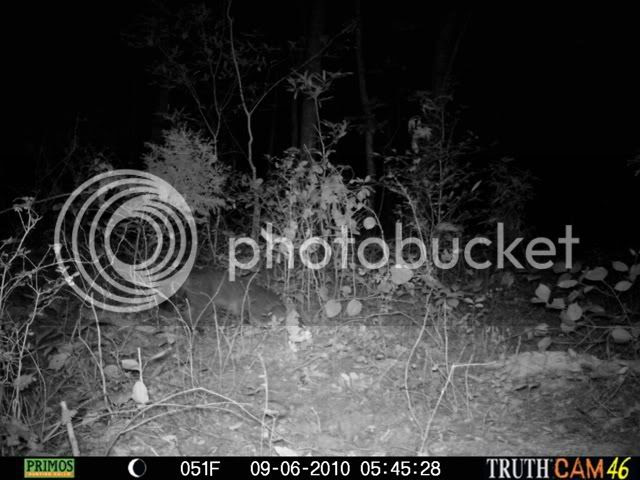 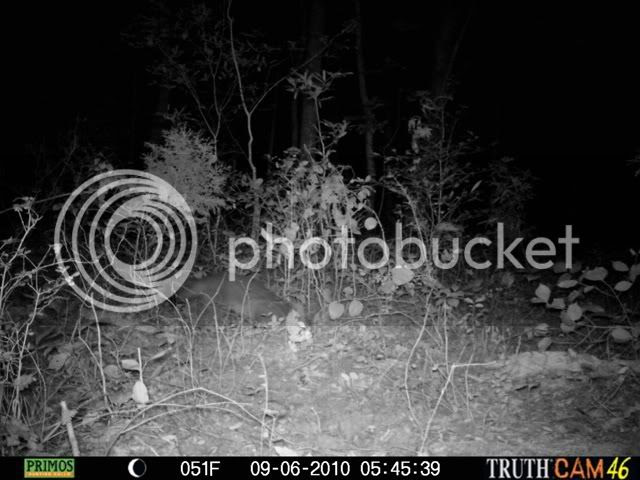 The reason why canines roll in scented-stuff is not fully understood or agreed upon.﻿  Although a plethora of anecdotal and pseudo-scientific explanations for this behavior can be found on many websites, I have (to-date) not found one that backs their claims up with hard data, or references to scientific literature.

Mech and Boitani (Wolves: Behavior, Ecologyh & Conservation, 2003) summarize research that has been done on wolves to help better understand this phenomenon.  But even the work they cite, although giving good information about what type of scent-stimuli wolves will choose to roll in, does not clearly indicate why they do it!

The general possibilities proposed to explain this behaior include: (1) "familiarization with novel odors or change in odors", (2) "strong attraction or aversion to particular odors", (3) "concealing one's own scent with something more pungent" (an obvious advantage for a hunting carnivor), and (4) "making oneself more attractive by applying novel odor".  An interesting study on African wild dogs found that females will roll in the urine of the lead male in a pack they are trying to join.  This may increase their chances of acceptance becuase they are coated in a scent familiar to the pack they are hoping to get in with (Frame et al. 1979).  It has also been proposed that individuals roll in specific scents to bring back information to others in their packs.  For example, bringing back information about the age of a carcass found to others in the pack.....

Some time in October, I had the good fortune to come across a freshly road-killed eastern gray squirrel.  I took the carcass and wired it to a stake in front of the camera.  I placed a dollop of commercial trapper lure, specifically for coyotes, on the stake and sprayed the stake with some commercially purchashased/preserved coyote urine.  So, the stake (a.k.a. the stink pole) has becomes very hard to resist!

Although a raccoon and opossum fought over and removed most of the squirrel carcass before a fox or 'yote could get at it.....a gray fox eventually shows some interest. 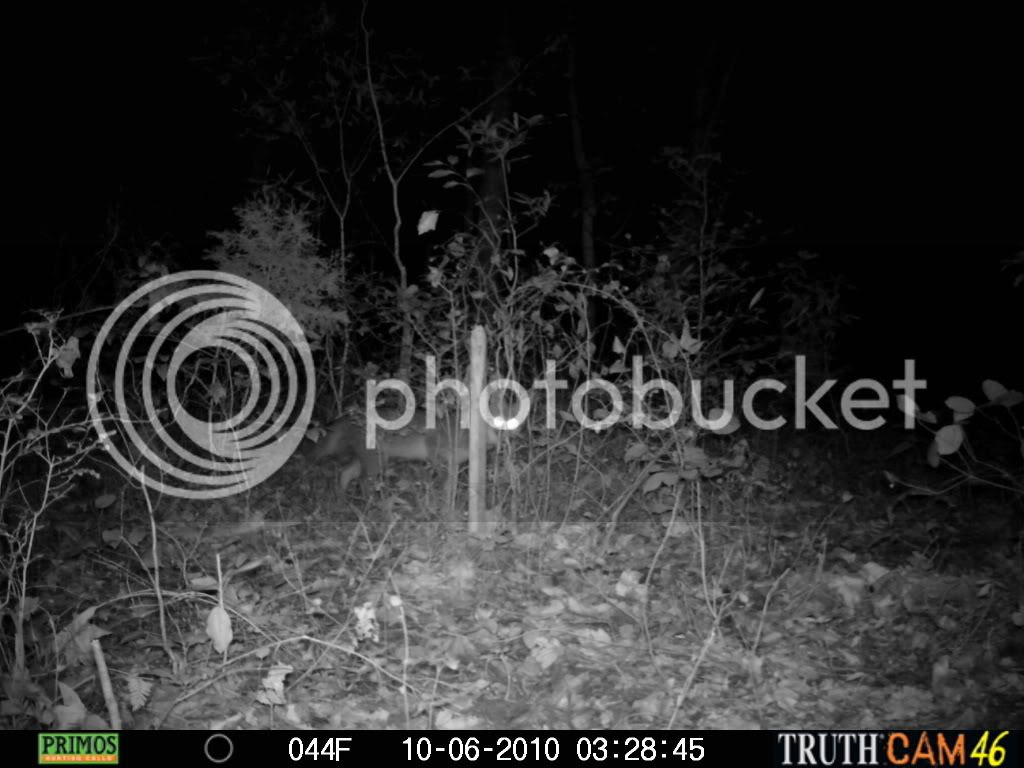 Each week, I continued to add alittle more scent lure and coyote urine to the post, until...finally....he grew bold enough to really show off for a close-up! 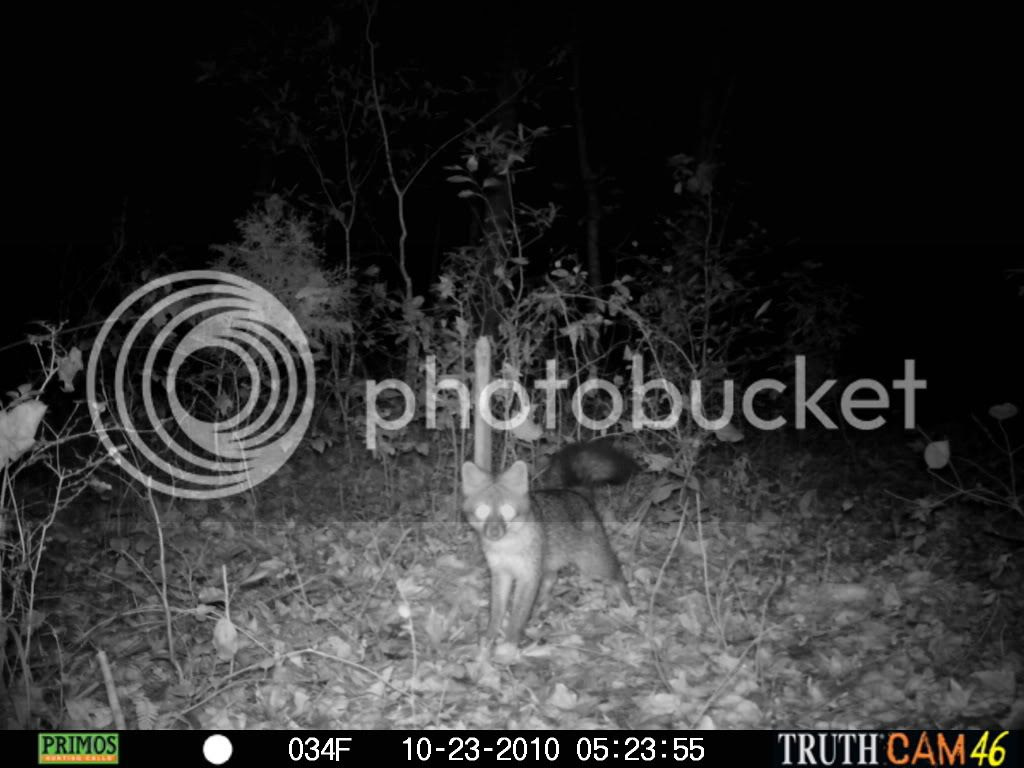 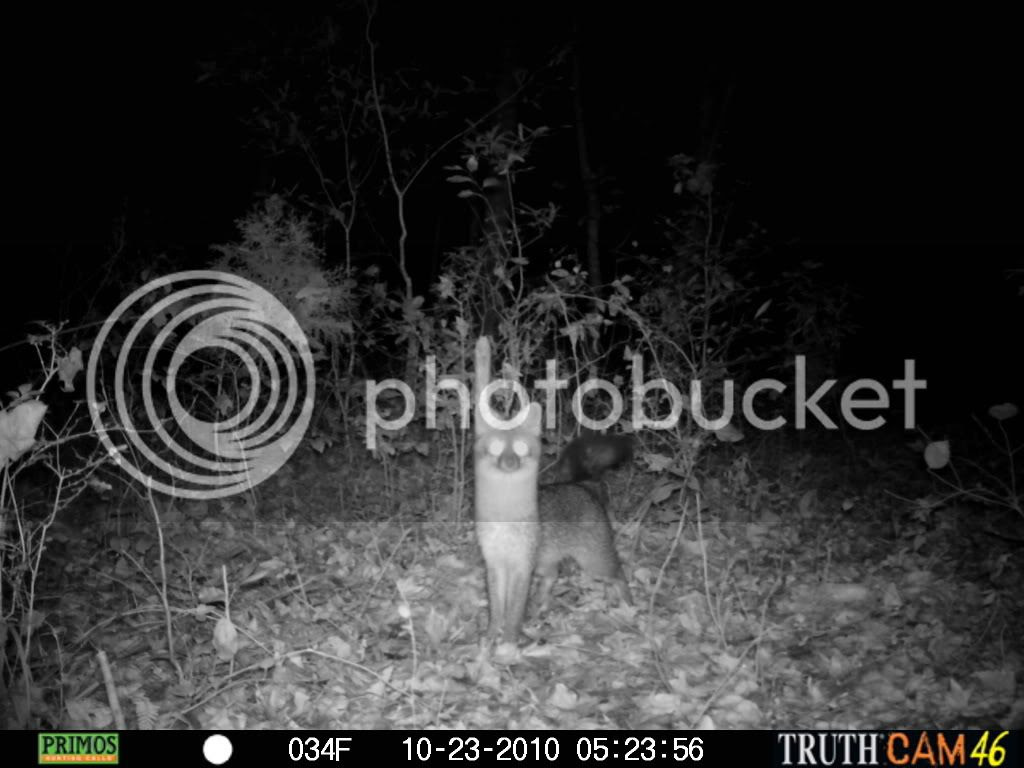 It's around this time, that my gray fox captures on many of my cameras goes through the roof...even cameras that I didn't put scent or bait in front of.

A combination of seasonal activity shift and acclimation, perhaps.

BTW...I have many more gray fox pics to show you!!  They are one of my favorite critters in our area, so I hope you all don't mind!

Literature Cited and Further Readings on Scent-Rubbing in Carnivores:

Frame, L.H., J.R. Malcolm, G.W. Frame, and H. van Lawick. 1979. Social organization of African Wild Dogs (Lycaon pictus) on the Serengeti Plains, Tanzania 1967-1978. Zoological Tierpsychology 50:225-249. (note: I could not find the above article, and was not able to read it....so my comments on this study are based on what Mech and Boitani report)