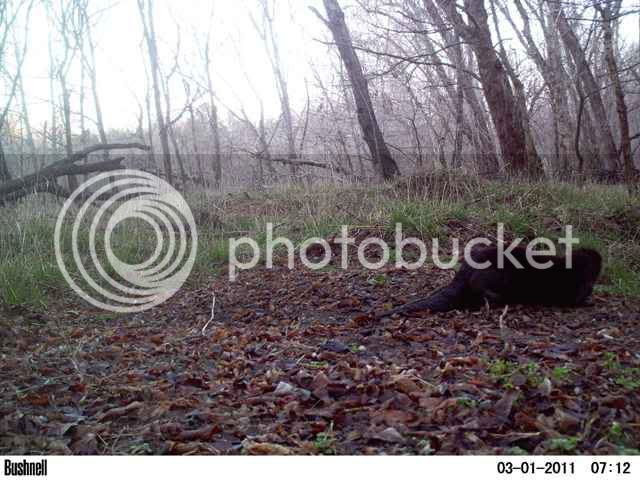 I spent alot of time last summer and fall trying to get pictures of any member of the weasel Family (Mustelidae).  In our area this includes long-tailed weasels, minks and otters.  Skunks used to be in this Family, but have apparently been moved into the Family Mephitidae, which was news to me.

I trudged along stream and river banks looking for good sign of mink and otter, in particular, having limited success.  I'd see tracks.  Occassionally, I'd find a spot that looked like it might be an otter slide.  Every time I'd find a hopeful spot, I'd put up my camera and cross my fingers.  Time and again I'd come up empty!  Webster et al. (1985) mention them as being incredibly rare in our area, but I was convinced I could find them.

Still, none of those early spots ever really had what I was looking for (I was just sort of settling for whatever I could find).  About a month ago (on February 9, 2011), I was checking out a previously un-explored area of one of my study sites and stumbled across the exact thing I had been hoping to find:  a river otter latrine (Lontra canadensis).

It was located on the banks of a largish stream right about where it fed into a river.  This area created a point of land where the stream/river confluence occurred (an area that Stevens and Serfass [2008] indicate is a typical spot for an otter latrine site).

After finding the latrine, I vividly recalled the words of a colleague who is the furbearer biologist for the state:  "If you ever find an otter latrine, set up a camera on it".

So that's what I did.

An otter latrine is exactly what it sounds like: a place where otter come repeatedly to defecate and deposit scent.  Luckily, otter scat is very easy to identify.  Often times, the scat is placed on top of a mound of leaves and debris that the otter piles up. It's usually loaded with fish scales, small bones and crayfish parts, which is what river otters eat.  Melquist and Hornocker (1983) report on the diet of river otters.  They found that of over 2,000 scats examined, 93-100% contained fish scales, with the remains of other vertebrates (amphibians, birds, mammals) and invertebrates (crayfish) being far less common. Serfass et al. (1990) studied >400 otter scats in Pennsylvania and found that 93% contained fish, 44% contained crayfish.  The fish eaten are not usually game fish.

Here are pictures of two scat deposits I found side-by-side on the latrine when I first ran across it (February 9, 2011).  These were actually alittle old at the time I found them, and I didn't know if the latrine was still active.  Fish scales are obvious in this first scat.  Aside from these two, no other scat appeared to be present at that time. 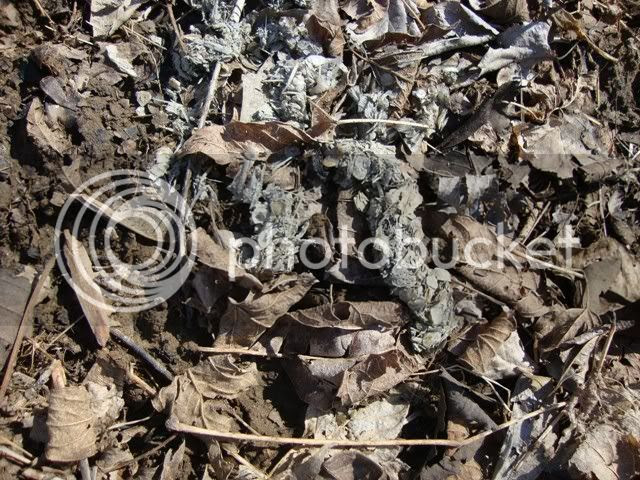 \
In the second scat, it seems that crayfish parts (or perhaps even crunched up shellfish) are more prominent.﻿  Fish scales are also present. 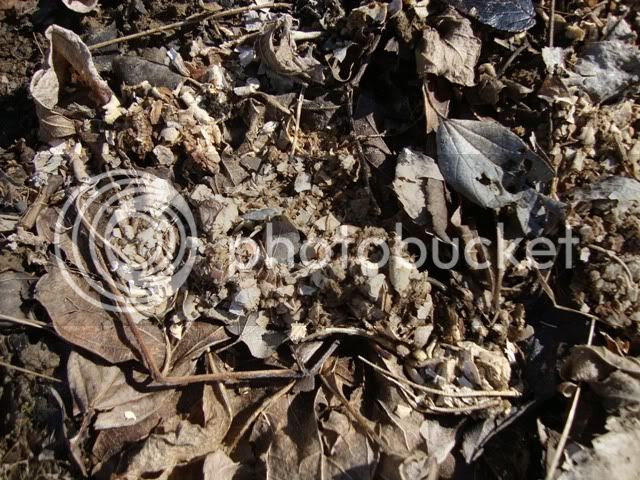 I came back a week later, and checked my camera.  There were obvious signs that the otters had been back.  Fresh debris mounds with piles of scat on top were everywhere....and it was clear that the otters were actively sliding down the bank near the latrine and into the stream. 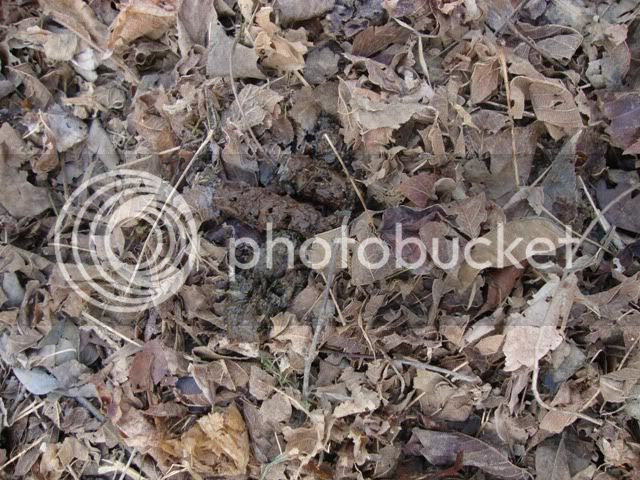 So...fresh otter activity.  Great!  That means they were on the bank near my camera!  But, the activity was all outside of the camera's field of view, which made me a tad nervous.  I had to hope they passed in front of the camera to create these new scat piles.

When I checked the pictures from the camera I had gotten otter pics.  However, most of the pictures were of their tails as they bounded past the camera quicker than it could take a pic!  I did get a full-body shot of one that stopped for a second to sniff the ground before sliding past (the pic is blurry, but at least it's the whole body). 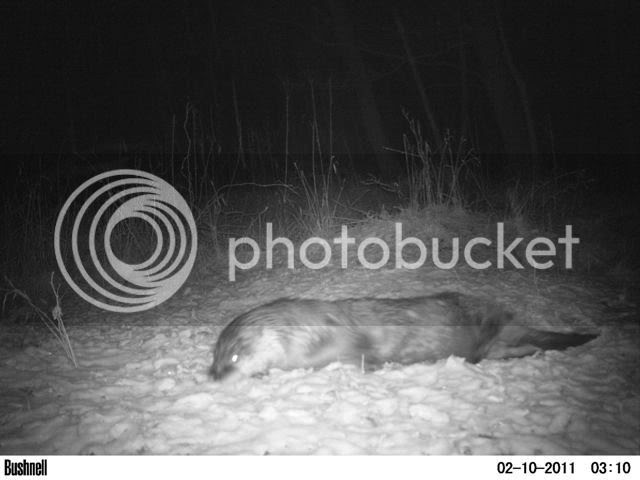 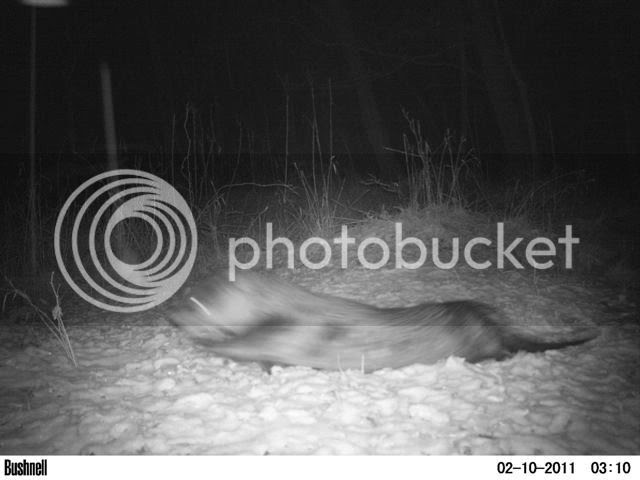 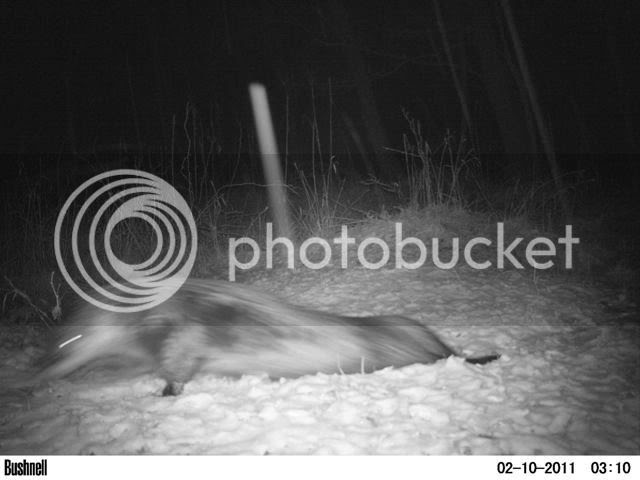 Otters weren't the only critters to wander by this location over the last month.

A coyote or two (Canis latrans) trotted through the area. 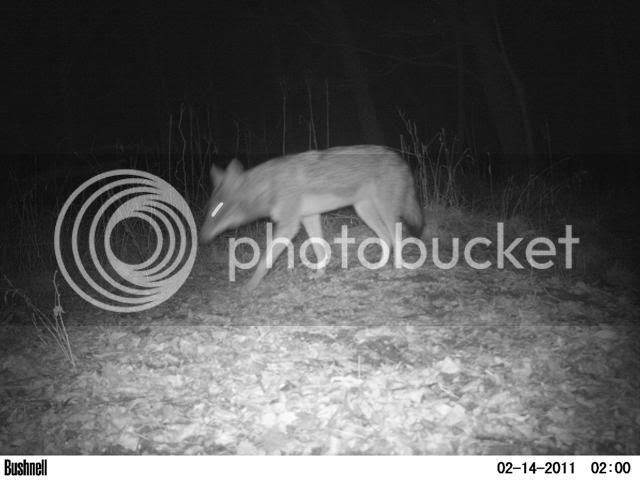 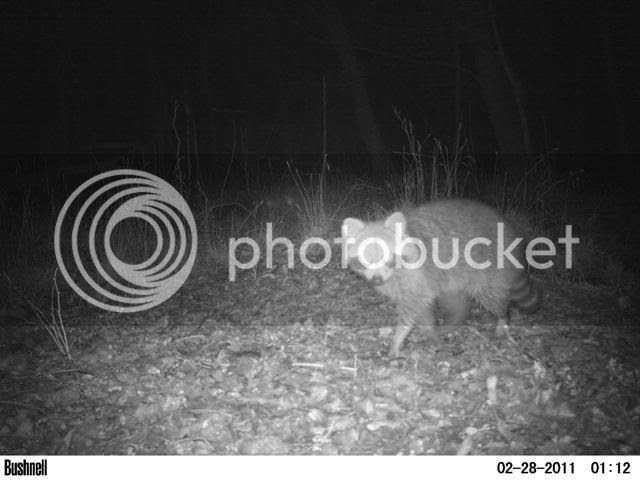 And as usual...deer (Odocoileus virginianus) seemed to be present in massive abundance
. 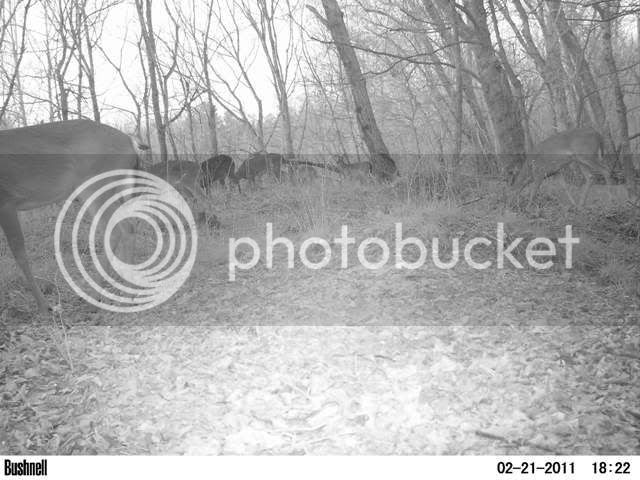 So, I had gotten an otter picture in week 1....but not a great one.  Plus, I was interested in seeing how frequently otters visited the site throughout February and March because according to Stevens and Serfass (2008), these were the months of peak otter activity at 11 latrines monitored over two years in Pennsylvania.

So, I returned to the site on the 23 of Feb. to find more fresh otter scat.  In the picture below, the fish scales and crayfish parts are easily visible again. 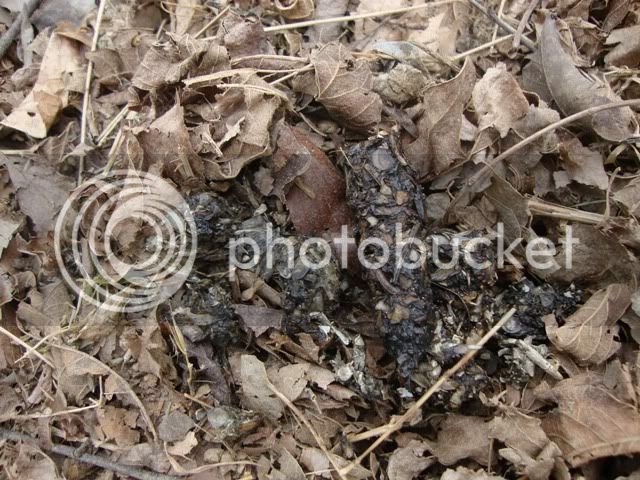 ﻿Unfortunately, the camera only barely picked up the tails of these individual otters as they moved quickly past.  Very annoying!

On 2nd March 2011, I returned to the latrine to find still more fresh activity (as usual, mostly out of my camera's field of view).  I pulled the card on my camera when I got home, and found the pictures were again mostly of otter tails.  Luckily, one individual did take a second to turn towards the camera! 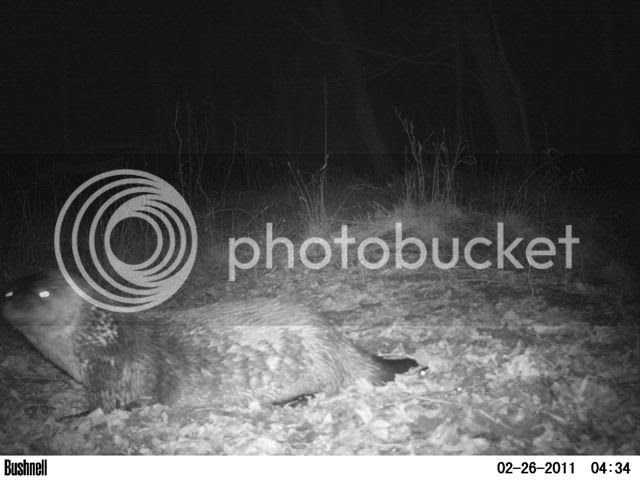 I also got my first daytime otter picture, although it was looking away.

I have more otter pics that I will post in the future.

I hope you enjoyed them!

Information on the function of otter latrines:
The exact function of North American river otter latrines is unknown.  As with many carnivores, olfaction (scent) is the main means for communication among otter (Kruuk 2006).  Several studies have suggested that latrines are used by otters to scent mark and advertise their presence (Melquist & Hornocker 1983, Melquist et al. 2003).  Other studies have found that the frequency of otter visitation at latrine sites varies by season, supporting a possible link between peak marking activity and breeding season (Stevens and Serfass 2008).  For example, Stevens and Serfass (2008) report peak activity at latrines in February and March, which is immediately preceeding or during the breeding season (March/April) in Pensylvannia.  Therefore, it would make sense that depositing scent at latrine sites is done to communicate with the opposite gender.

Kruuk (2006), however, suggests a different explanation based on research he conducted on Eurasian Otters (Lutra lutra), which he claims extends to the North American River Otter.  He reports that, although latrine use varies by season (peaking in Spring) and males use latrines more than females....these differences are not significant. Rather, he suggests latrines are used to advertise a particular otter is using the location associated with the latrine as a resource (feeding area) and that other otters should stay away.  This he claims is resource partitioning for the purposes of avoiding competition for feeding sites and food among otters. He poses several lines of evidence to support this: (1) all Eurasian otters (males, females and juvniles) defecate at latrine sites at roughly the same rate.  If males defecated at latrines more often, that would be more likely to suggest they function for breeding. (2) Eurasion otters defecate more frequently immediately before they enter a feeding location (as opposed to during feeding or after feeding).  This is supposedly meant to signal to any other animal entering the area that an otter is already looking for food there.  (3) He found that the seasonal variation in latrine use corresponded with food availability.  In other words, in the summer when food was plentiful and there was less likely to be competition for dwindling resources, latrine use was lowest.  In Winter, when food avalailability was low, otters became more protective of a feeding area and defecated nearby more often.

Not sure which I think is right.  But, whichever one is correct.....one thing is for certain.....otters are cool as hell!