All The Myriad Salamanders

The Appalachain Mountains posses a dizzying array of salamander species.  The diversity of these amphibians is so great that it can take one years to learn how to identify them in the field.  Take the genus Desmognathus: this genus alone has 17 species that are spread throughout the mountains in portions of the Carolinas and Virginia.  The Genus Eurycea: 10 species.  The genus Plethodon: 29 species!!!  This isn't even including the "less" speciose genuses (Ambystoma, Pseudotriton, etc.).

These are all members of the Family Plethodontidae....which are "generically" referred to as the "lungless salamanders".  The name is apt, as almost none of these species have lungs, but instead absorb oxygen through their skin.  The explanation for why having no lungs is a good adaptation for these species varies.  A plausible explanation surrounds the habitats they have evolved to prefer (cool, clear, fast-flowing streams).  Because the water in these flowing streams is moving rapidly, it's is well oxygenated.  Furthermore, cold water typically has a higher oxygen concentration than warm water.  So...oxygen is plentiful in the soggy habitats they prefer....so plentiful that they can absorb the oxygen through their skin very effectively in these damp environs.

But what is the advantage of having no lungs?

Having grown up in a state where the total number of salamander species is less than 10 (7, to be precise)....the salamaanders of the Appalachain Mountains are daunting, to say the least.

Couple this with the fact that I do not live in the mountainous portion of the state, and encounter a much smaller number of species during field work........I am a complete dunce when it comes to salamander identification in the mountains!

So, earlier this month, I had the opportunity to take part in a salamander workshop in the mountains lead by a salamander expert: Lori Williams (NC Wildlife Resources Commission).  Also, Jeff Beane (NC Musuem of Natural Sciences), who is another salamander ID expert was along.  As expected, I had no clue what species I was finding.  Luckily, I had help with the identification and we found some salamanders that were life-species for me!

First of all, salamander habitats in the mountains are beautiful.  Plus, I was able to do field work with some very knowedgable folks.  Pictured below, among a variety of graduate and undergraduate students, are Lori, Jeff and Bryan Stuart (NC Museum of Natural Sciences). 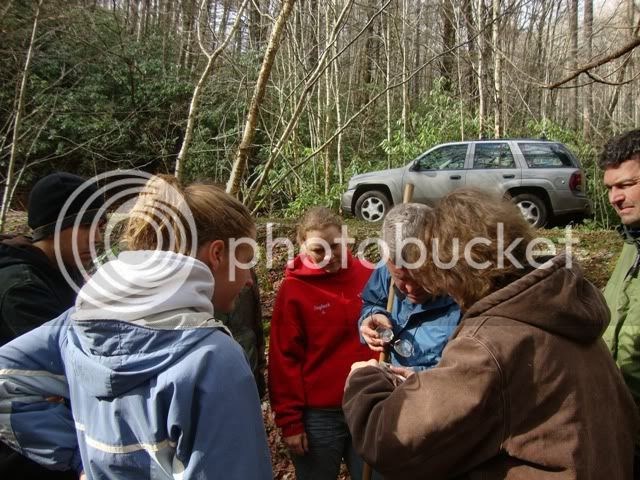 ________________________________________________________________________
Mountain streams are a goldmine for salamanders in this region.  Typically one flips rocks, rotten woody debris and moist leaf litter along the stream edge, or in the adjacent riparian zone to find the little beasties.
Unfortunately, a nasty storm blew threw the area the night before our workshop, and the temperature dropped down to what is considered cold by southeastern standards.  As a result (I'm told), we didn't get quite as many species as we would have otherwise.
Regardless, I was thrilled with our findings!
First, we checked out a little over-flow seep﻿ along a stream.  The stream flowed past quickly up the hill from where we stood, and at the location pictured immediately below, the water from that stream was slowly seeping through the hillside.  Moss was plentiful, as were rocks and leaves with water-logged soil beneath. 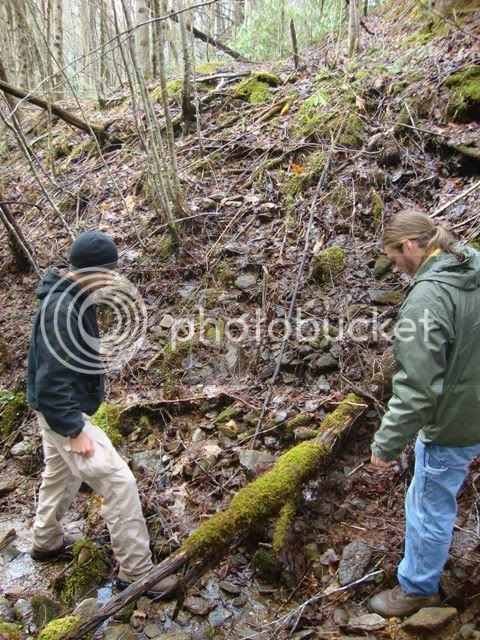 Above: The two Daves searching a seep for salamanders
So, we worked our way long the stream and associated seeps, flipping rocks, leaves and peeling back moss.  Our first captures (which I'll admit were not mine) were a few very nice adult Santeetlah Dusky Salamander﻿s (Desmognathus santeetlah). 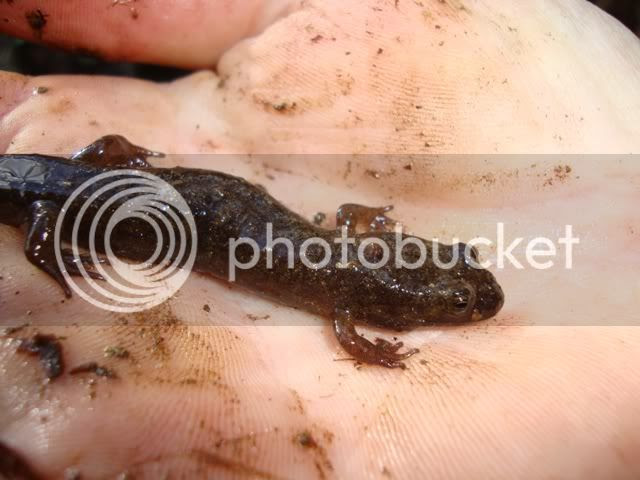 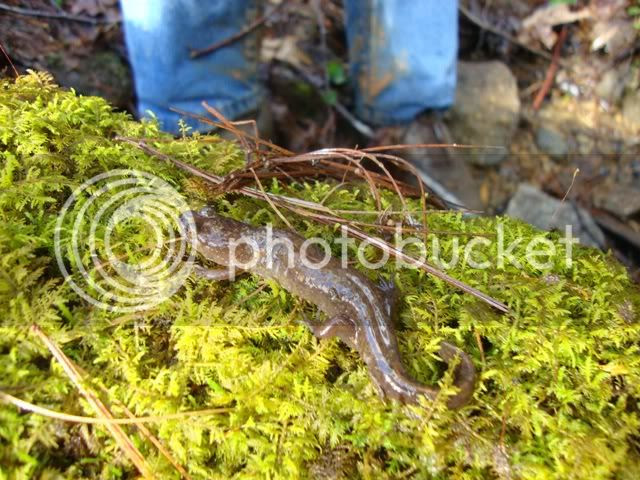 Next, a juvenile Seal Salamander (Desmognathus monticola) was found beneath some rocks (note the paired blotches running along the salamander's back). 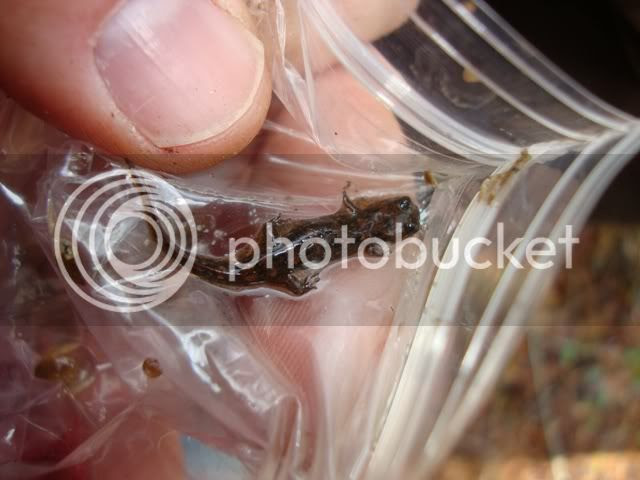 Someone also uncovered a hefty adult white-spotted slimy salamander (Plethodon cylindraceus), a species I have posted about finding before.﻿  This widespread salamander is found throughout much of the state. 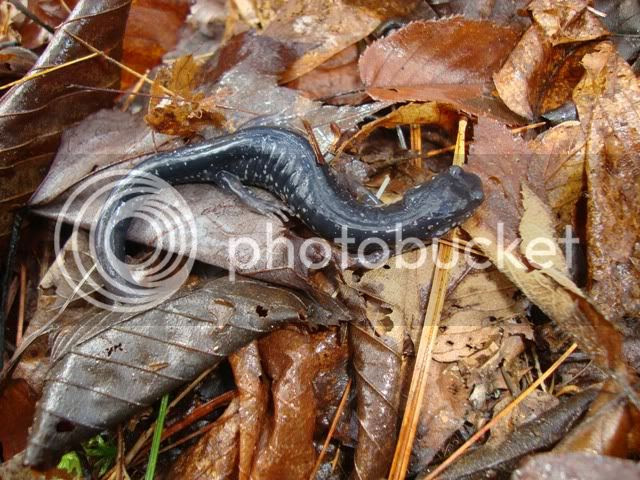 Later, in some woodlands associated with another beautiful stream (below), we found some different species. 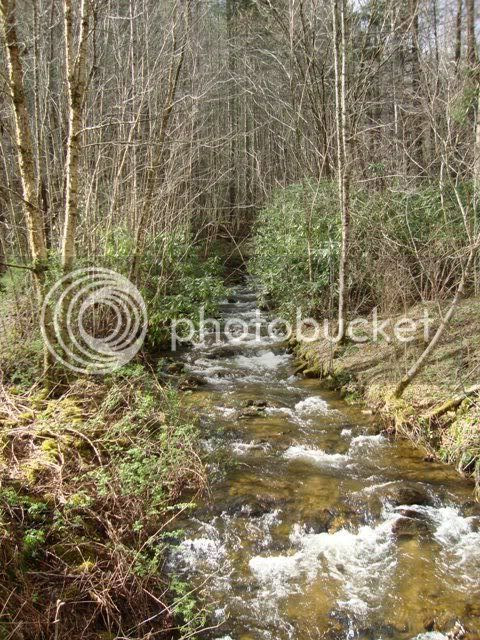 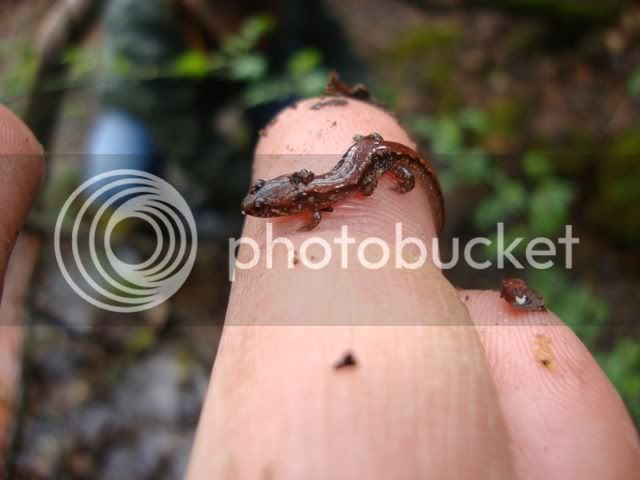 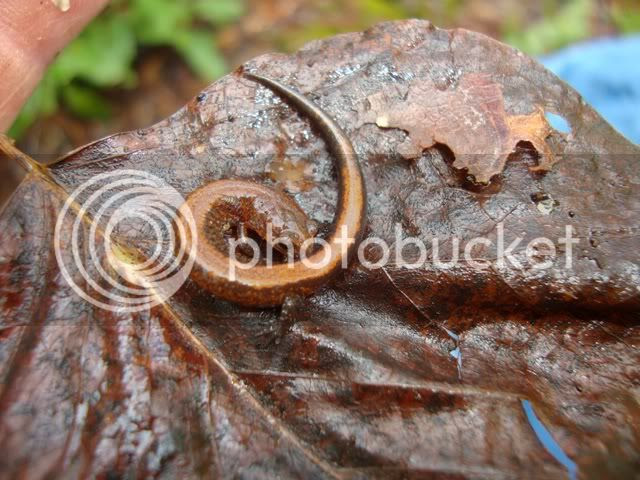 The two species pictured above look very similar.  The whitish line running from the back of the eye to the corner of the mouth on the Ocoee Salamander can help distinguish these two (or so I'm told :) ).

Next, I moved over to a very picturesque stream-side habitat and started flipping rocks....which lead to another nice Seal Salamander. 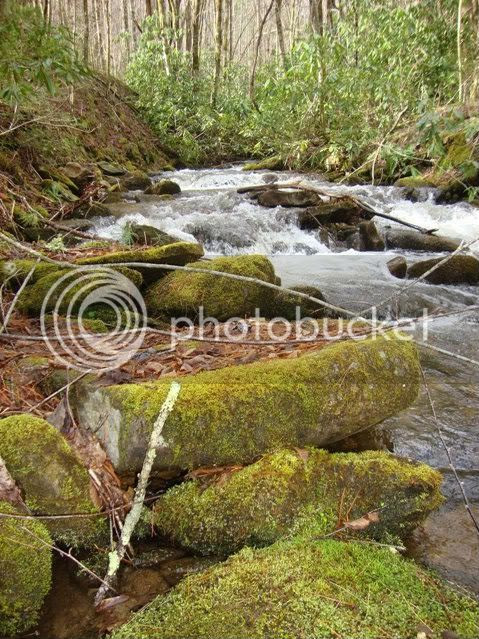 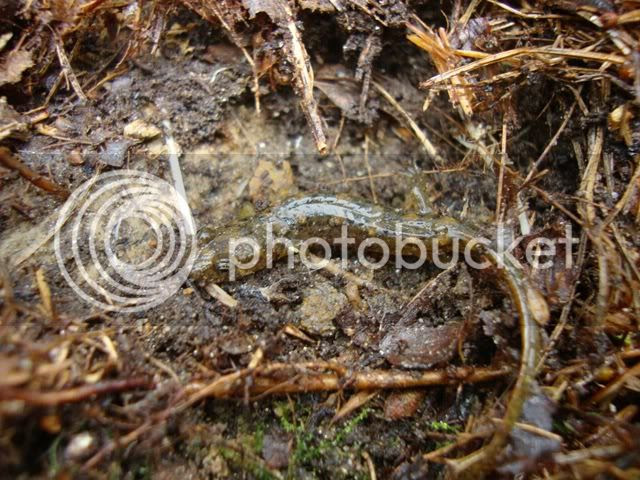 My first salamander hunt in the mountains was a success, thanks mostly to the folks I was with.
I also have to thank Jeff Beane, who helped me identify the critters I had taken pictures of.  I was too absent-minded to write down what I had been told they were when in the field (thinking I could ID them from the book later).  HA!  Luckily, I was able to send my pictures to Jeff for some help!
The herps have been out and about alot lately....I have some more great findings that I'll share with you soon!
For more information on Salamanders:
Beane, J.C., A.L. Braswell, J.C. Mitchell, W.M. Palmer, and J.R. Harrison III. 2010. Amphibians and Reptiles of the Carolinas and Virginia (second edition).  University of North Carolina Press.
Petranka, J.W. 1998. Salamanders of the United States and Canada. Smithsonian Books.
Mitchell, J.C. 2010. Salamanders of the Southeast. Wormsloe Foundation Publication.﻿
Posted by Trailblazer at 9:16 AM