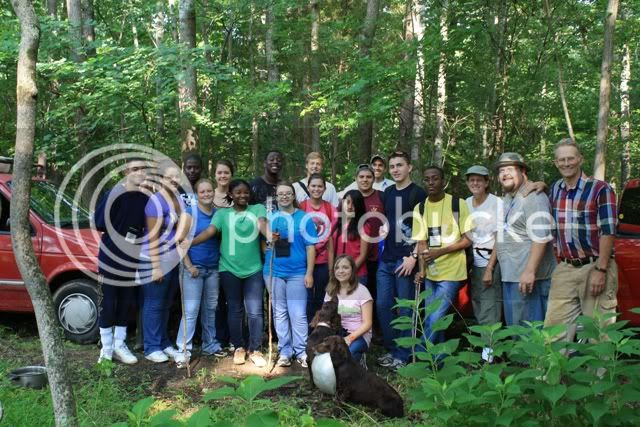 Heat indices of over 100 on several days....and in the upper 90s every other day.

The worst is that humidity.  Air so thick ya feel like yer swimmin'!  You just can't cool off.  Especially when one is an over-weight male of Germanic/Irish descent (like me :)  )  the humidity is brutal.

Anyhoo, that really did a number on how many critters we caught this week during our normal drift fence and coverboard surveys.  The total captures were down from the last two weeks.

So, that should result in a boring survey round up for this week right?

This week we got to take part in one of the coolest things I've been involved with in years.....the use of "turtle dogs" to survey for Eastern Box Turtles (Terrapene carolina) at one of our survey sites.

A colleague here at the university has a doctorate in Science Education.  Luckily for me, she also likes amphibians and reptiles!  She created a summer herpetology class for high school students who are interested in going to college. She recently wrote a successful grant to help design and fund this curricula..... and with some of that money she wanted to expose her students to doing surveys with turtle dogs.

Lucky for me, she also wanted to use one of my study sites (which is great, 'cause as much as I wanted to experience turtle-dog surveys....I have not got any money!). 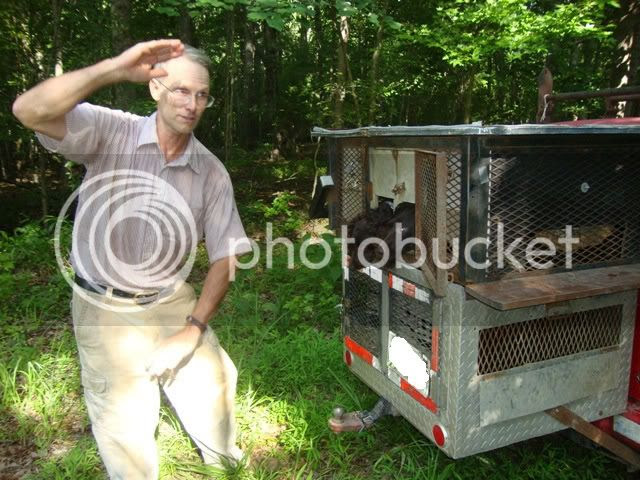 Above: John preparing to release the dogs from their holding crates on the back of his van. 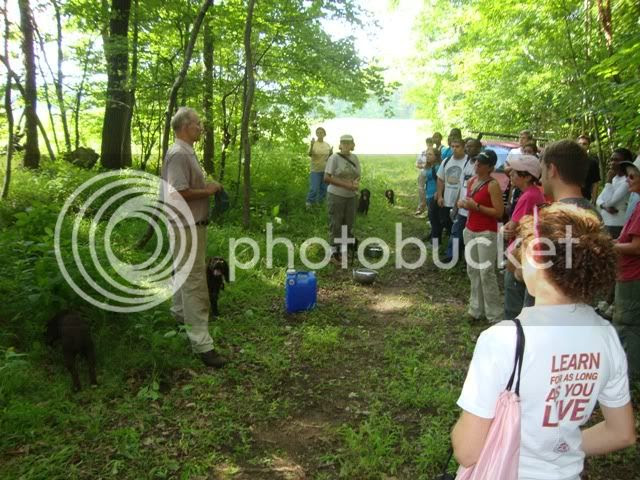 Above: John explaining the process to some students. 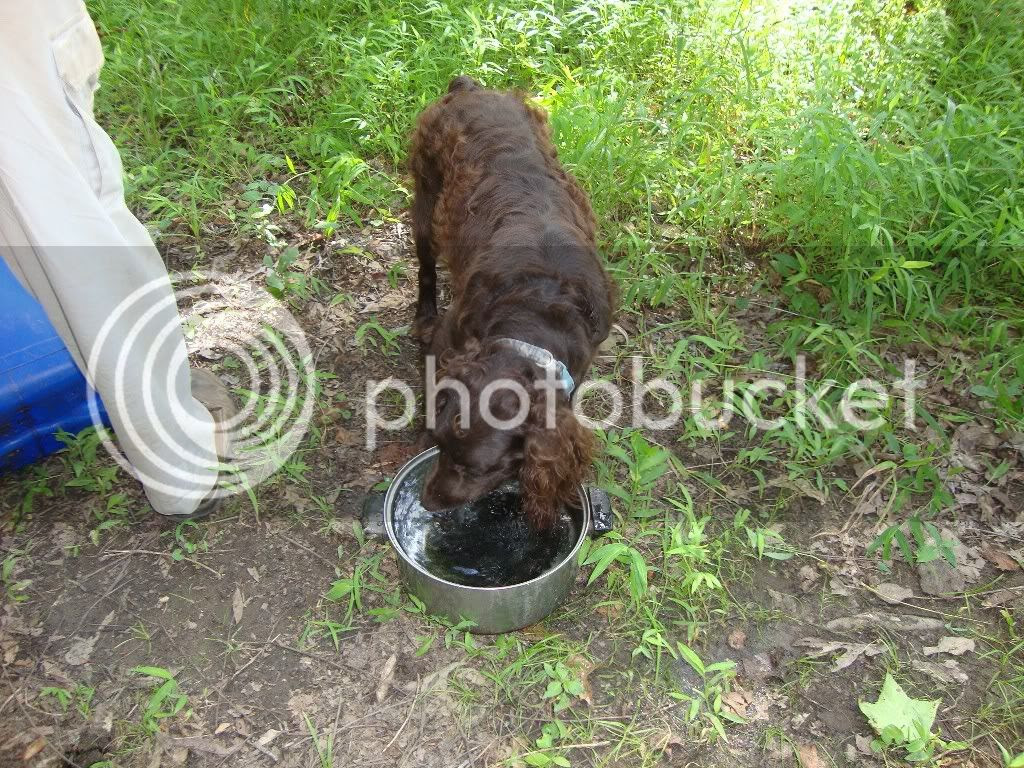 Above: one of the Boykin spaniels who ran turtles for us.  I can't remember this one's name.  Although John brought 8, we worked most closely with three: Mink, Greta, and Ginny Ray.
John drove from Tennessee with his fine pack of 8 Boykin Spaniels.  With noses like these canines have...they can sniff out whatever you teach them to find.  Some folks teach their spaniels to retrieve waterfowl they've shot.....some teach theirs to flush quail or pheasant.....John taught his to find turtles!   John charges a very reasonable price for his services, and because of this has done work all over the U.S. 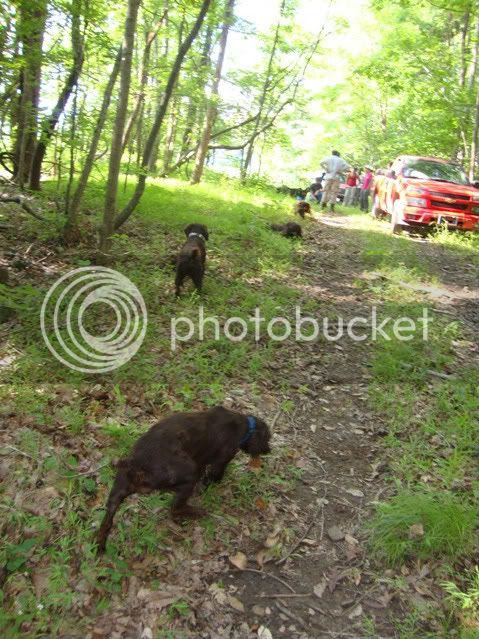 Above: although we only ran a few dogs a day, the others got to be let out of their crates and staked to the ground with a lead to stretch their legs and get some water.
Not only can they find turtles, but they can do it while still thinking for themselves.....and surviving.

John told a story about a little gal of his named Greta that brought this point home brilliantly.  He was in the Badlands of South Dakota...working for a group that was having his dogs look for Ornate Box Turtles (Terrapene ornata).  At one point, Greta caught the scent of a Pronghorn and was gone.....John said they were specks on the horizon before he even realized it.  He waited (his dogs usually come back), and looked for hours....no Greta.  He slept in his van out at the spot he last saw her, hoping she'd return....no Greta.  He figured she had been taken by the land, some Coyotes....or perhaps a Cougar.  But just in case, John had his girlfriend place an ad in the local paper and hoped for the best.

Fourteen days later, he gets a phone call.  The dog had showed up on a rancher's property some 30 miles away.

Now, this work was conducted in an area where a lot of feral dogs run.  The rancher apparently has a policy that any feral dog that comes on his land is shot just as fast as he can get to his pistol.  But serendipity worked in Greta's favor.  The back door of their house happened to be open.  Apparently, the rancher's wife was working at the laundry machine when she felt something nudge the back of her leg.  She turned around and there was sweet little Greta.  Face covered in ticks....ears sticking straight out from all the cockle-burrs....alittle skinny and dehydrated....but alive.

The rancher announced he was going for his gun, but his wife told him to wait.....there was just something different about this dog.  Not a few hours later the rancher's neighbor happened to have seen the ad in the paper about the missing Boykin Spaniel and happened to call the rancher to let him know about it.

And that's how Greta survived her 14 day solo tour of the Badlands.

We had John and his dogs come to our study site for two back-to-back days.  During both days, we ran the same number of dogs, through the same area, for the same amount of time and let them catch as many turtles as they could find.

We started each day by taking the dogs to the area we wanted them to search (so they wouldn't become distracted with other scents).  Once we were to the right spot, the dogs went to work...and boy did they work!  The remainder of our time in the morning of both days was spent following and encouraging the dogs....letting them catch stuff...while we followed as fast as we could, flagging the site and bagging the turtles for processing. 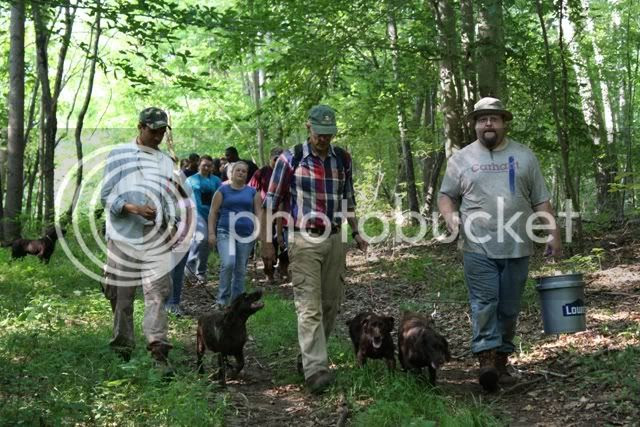 Above: walking the dogs down to where the official surveys started.
Photo courtesy of T. Tomasek. 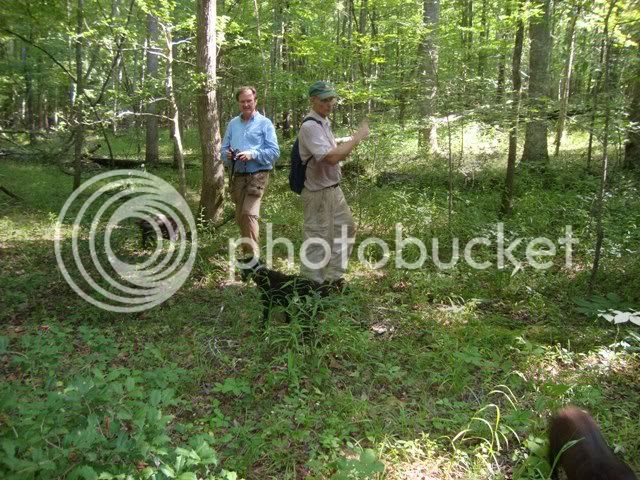 Above: the dogs at work! 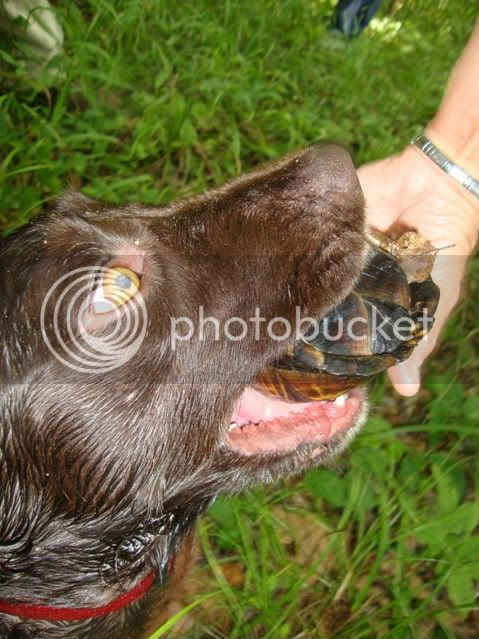 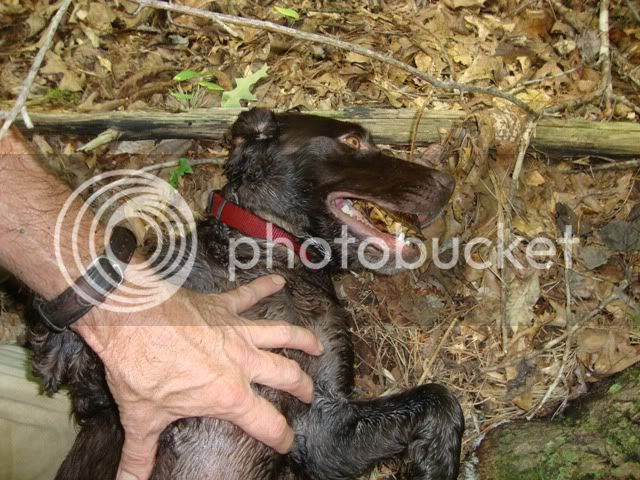 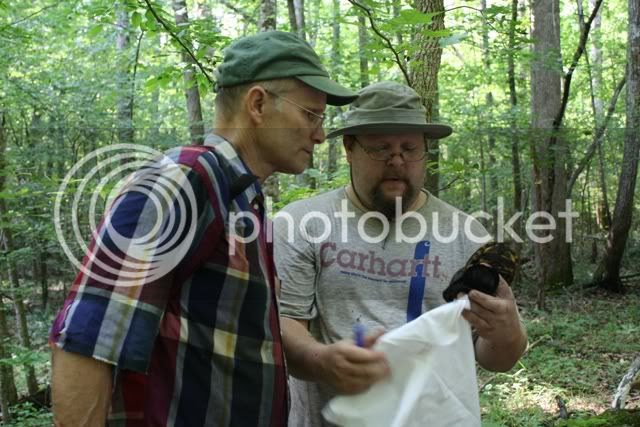 After a few hours of that (in brutal heat, I'll mention again)....the turtles were brought to a central location and important morphological data was recorded.  After the turtles were weight and measured, we gave each a unique mark so they could be identified in the future.  We ended by walking each turtle back to its original capture location using a GPS and looking for the appropriate flagging. 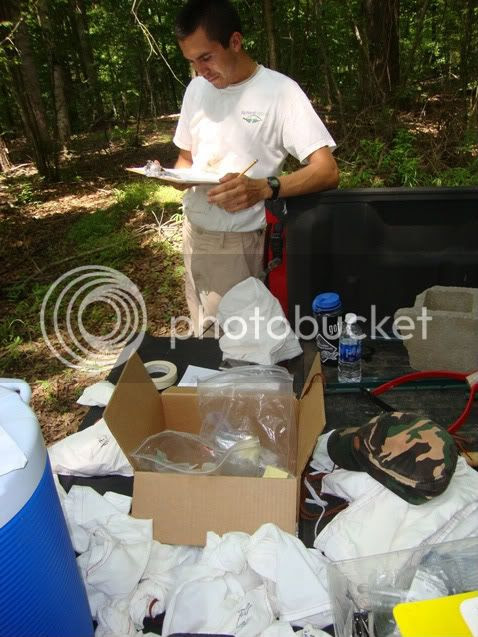 Above: My undergraduate research assistant, Dave, processing the turtles 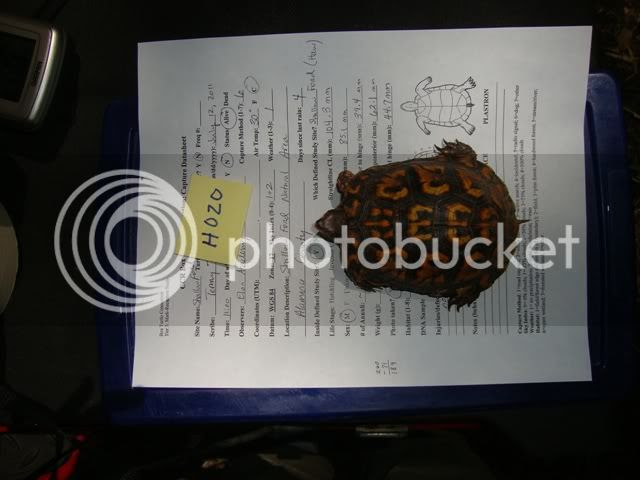 Above: a turtle with standard data sheet.
By the end of that...usually anywhere from 1:30-2 pm...we were all tired and soaking wet with sweat....but did we ever have fun!

So let me put this into perspective for you:  from last August (2010) until this Monday...between myself, Dave, and all of my Wildlife Ecology students last fall....putting in a total of over 300 person hours on this property....have found about 22 Eastern Box Turtles.

In a total of 3 hrs over two days....these dogs found 25!  This includes 5 juveniles (of which I think I've seen ONE previously). 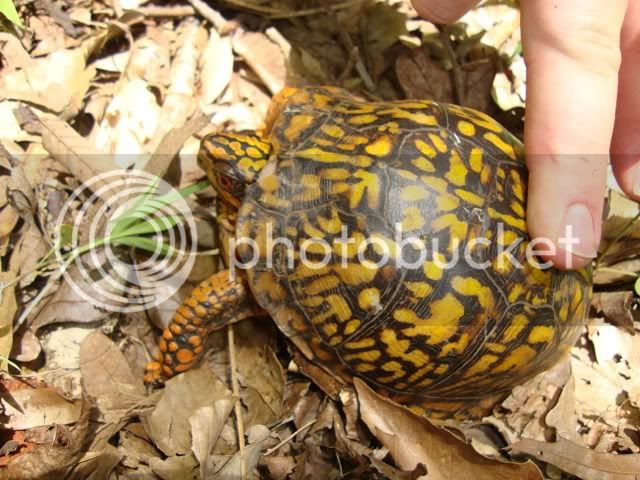 Above: Turtle number H023.  One of the turtles originally captured on day one, who was recaptured during day two of the surveys.
Posted by Trailblazer at 8:08 PM