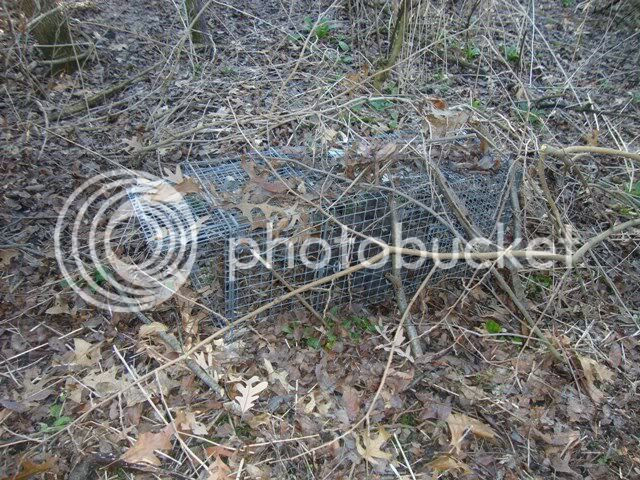 This week in lab, we added another element to our site assessment: mammal trapping with wire cage traps.  Admittedly, wire cage traps are very hit-or-miss in their success.  You typically have to either (a) riddle a site with many traps or (b) get pretty lucky.  Generally speaking, canines are just too dang smart for cage traps.  You really need leg-hold traps to have good success there, but leg-holds require a substantial amount of skill (and equipment) that I just don't have.  They also put students in too close of contact with potentially dangerous/diseased critters at this point in their careers.  As it stands, I had decided I would be the only one releasing animals from the cage traps, despite the fact that this exercise is quite a bit safer than releasing them from leg-holds.

Of course, the success of a cage trap also involves picking good locations.  Using the right bait is another important consideration.  But, the best bait in the world wont matter if the critters don't happen to walk by (which is the reason why lots of traps helps).  Unfortunately, during year 1 of this course, the budget for lots of cage traps was limited by the budget for lots of camera traps.  So, we'll have to add more cages in the future.

As it stood this time, we had four.

Not great, but every student group got to test their skills at setting them, and they were active for two trap-nights.  With the very high numbers of raccoons, opposums and skunks on-site....I figured we'd get something.

So, we went about setting traps late afternoon on day 1.  Personal scent control helps, but can be difficult to achieve with students....who often come to any and every group function (including lab) fully perfumed and cologned, with hair products to-boot.  At the very least, I make them wear rubber gloves when handling the gear....I tell them not to let the cages touch their legs as they walk, if possible....and mention they should make an effort not to drip sweat in the vacinity of the trap set (a problem that, in truth, only afflicts their overweight professor).  In reality, human scent is probably not a huge deterrent for things like Raccoons and Opossums anyways, but thinking about scent control is a good habit to maintain for trapping. 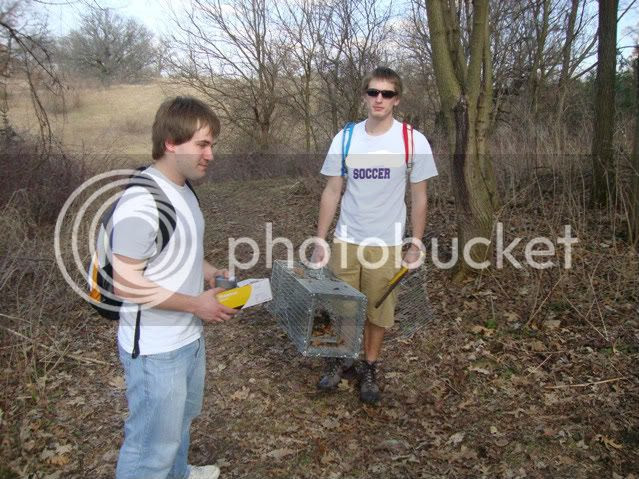 I generally have greater success when I've placed debris along the bottom of the trap, to hide the wire cage.  When critters feel that wire, some of them back-off.  One has to be careful not to allow debris to get under the trip-plate, so the mechanism continues to work.  I'll often place a bit of wool or alpaca fiber on the trip-plate to hide it (and provide insulation for the critter, should it get cold out).  I also like to put some debris (logs, sticks, etc.) around the cage to make it feel more secure, and put it near a natural shelter (a tree, thicket, fallen log, etc.).  This must be done with caution, however.  With all the skunks we've been getting photos of on-site, you have to have a clear path to walk up to the cage with the tarp protecting you.  Having to pull a bunch of logs, etc. off of the cage could upset little Pepe, and result in a face-full of glandular odorant.

Bait this time was turkey-flavored cat food.  It was cheap and I was in a rush, but that bait may have been a fatal flaw.  Next time I'll go with a sardines and bacon grease mix, if I can find the time to make the concotion.  We also applied a tiny bit of one of two scent lures (one was a shellfish oil based lure, the other a canine gland lure).

ANYHOO.....the next day, we marched out to the site....kevlar gloves, ketch-all pole and skunk tarp in-hand only to find: 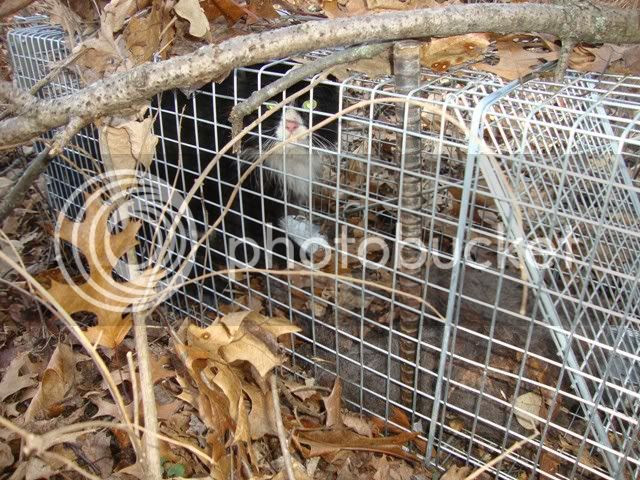 Grrrr..........released with much cursing under my breath at the waste of bait.

The bait in the other traps was undisturbed.

We moved the traps to new locations....but by morning on day 2 we found that not even a feral cat was stirring.  This time, however, just to see if it was lack of passersby OR critters being spooked by the cage, I had put a camera over one of the traps (set to video mode).  During the 24 period anyways, nothing wandered by. 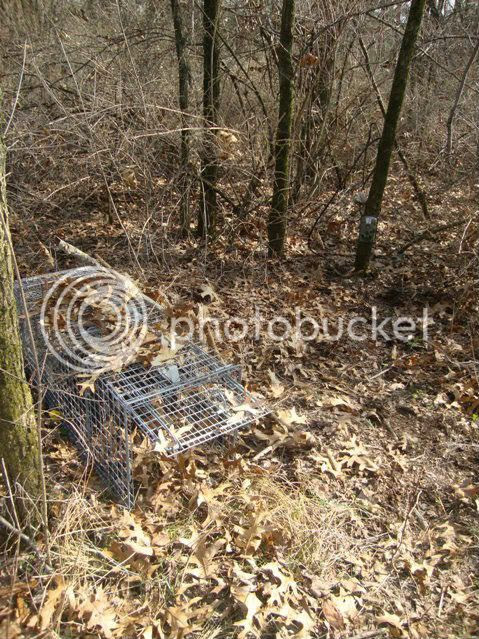 Above: note camera on the tree in the background.
More evidence that a greater number of traps would increase success rate.

Not as riveting as I would have hoped....but, as Sinatra would say:

Regardless, we did get some cool stuff on our cameras over the past week (you may remember that we moved these about a week ago).

It's the same cast of characters, basically.  But that doesn't keep the students (and myself) from being excited that the locations they picked paid off!

Raccoons are literally everywhere out there now.  We caught pics of them on all of the cameras, I think. 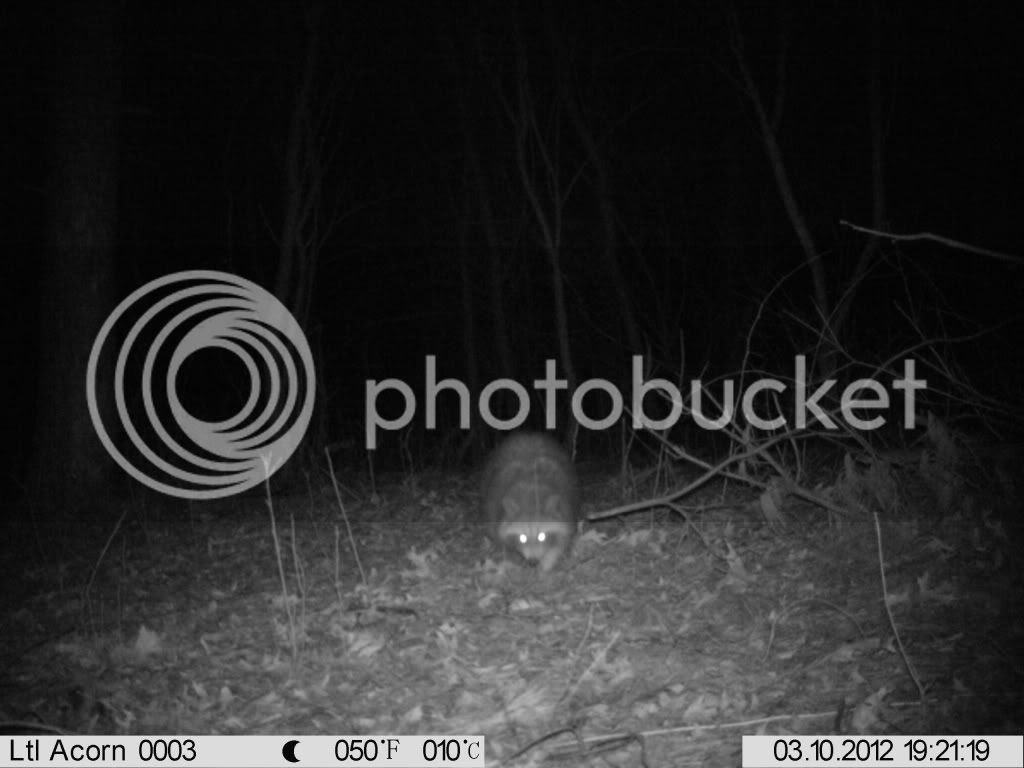 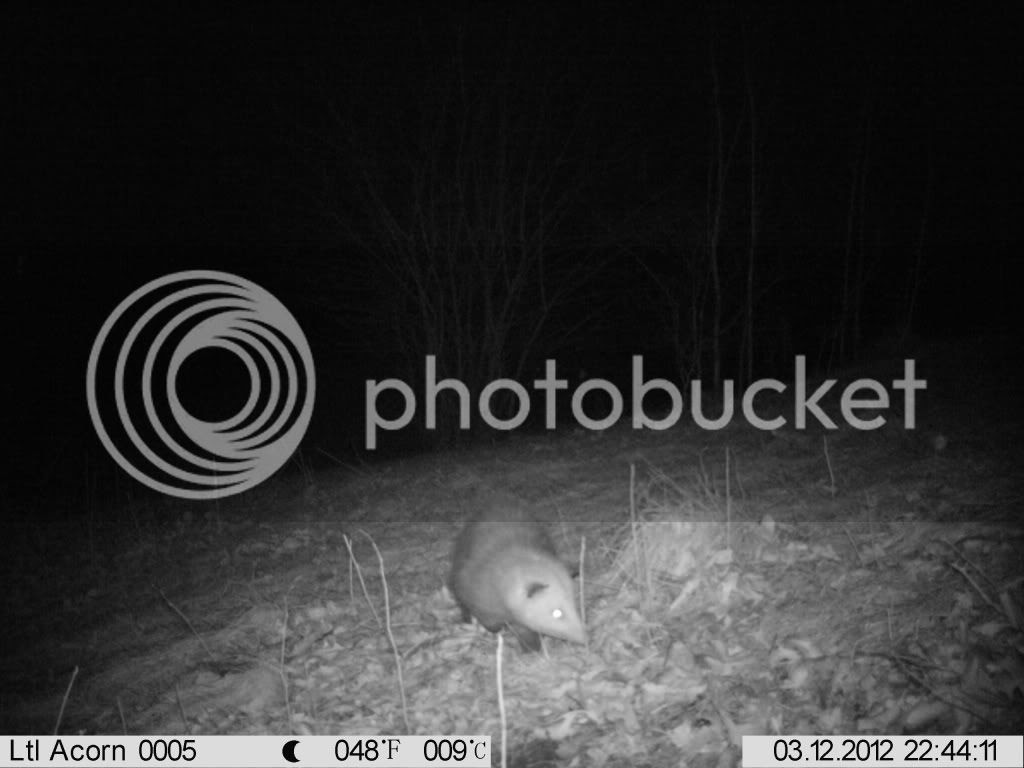 Cottontails, too, have become very active (the rather side-long glance this one is giving the camera made me laugh).﻿ 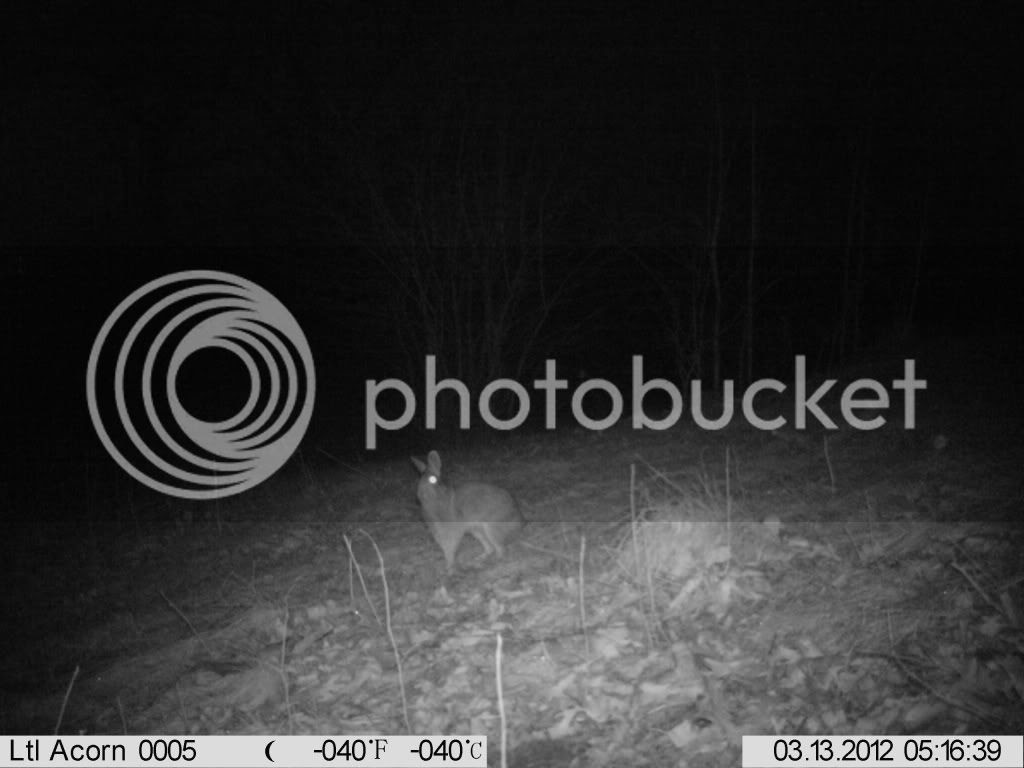 Stinkers are in no short supply.... 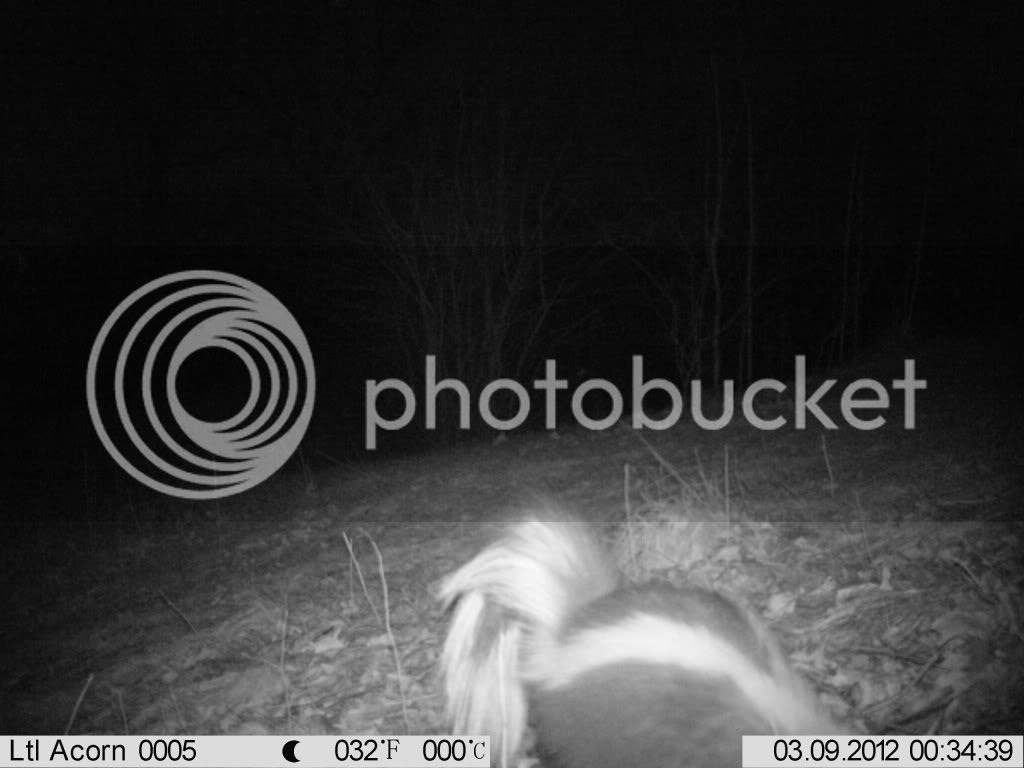 And, of course, there are deer...deer...deer and more deer.  There are now also deer TICKS that have popped out of every crack and crevice in the woods with the warm weather, a minor annoyance during field work. 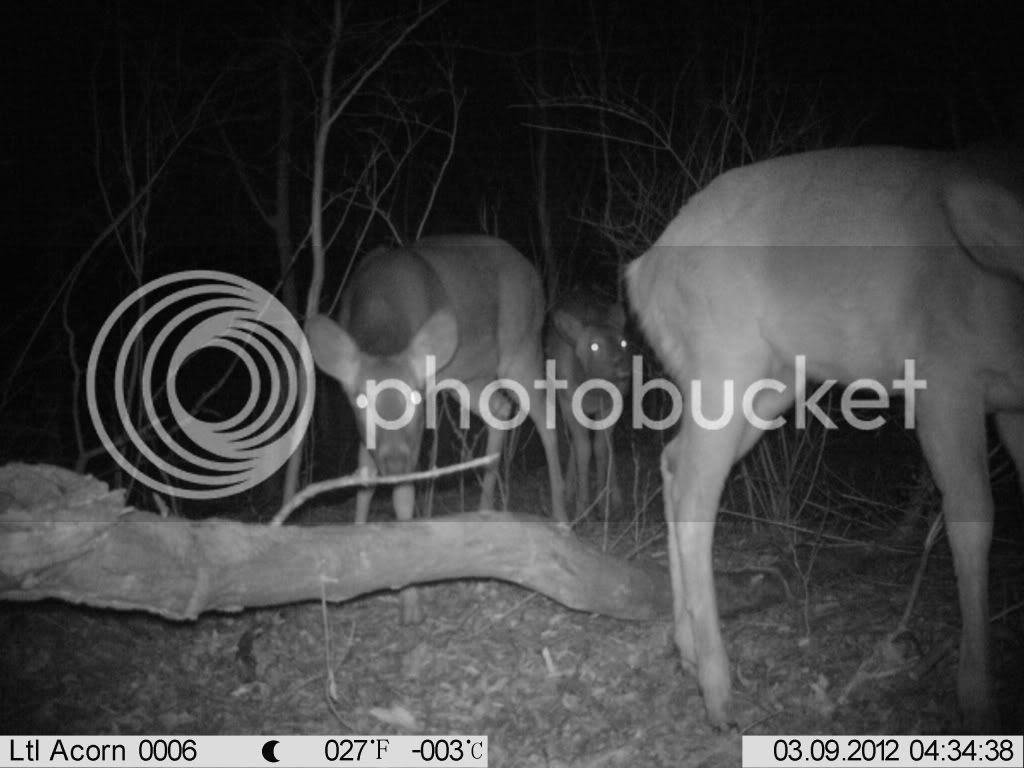 We also got a neat shot of a male walkin' bird showing off the goods to a nearby hen (left side of the frame). 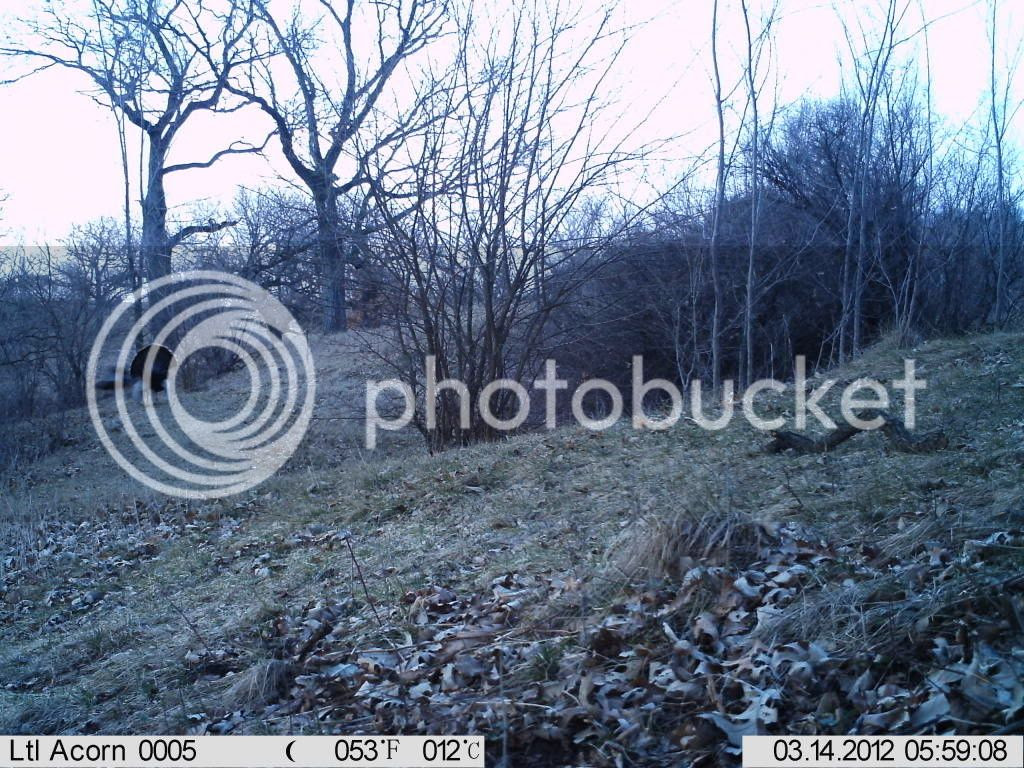 This one puzzled me for a second or two..... 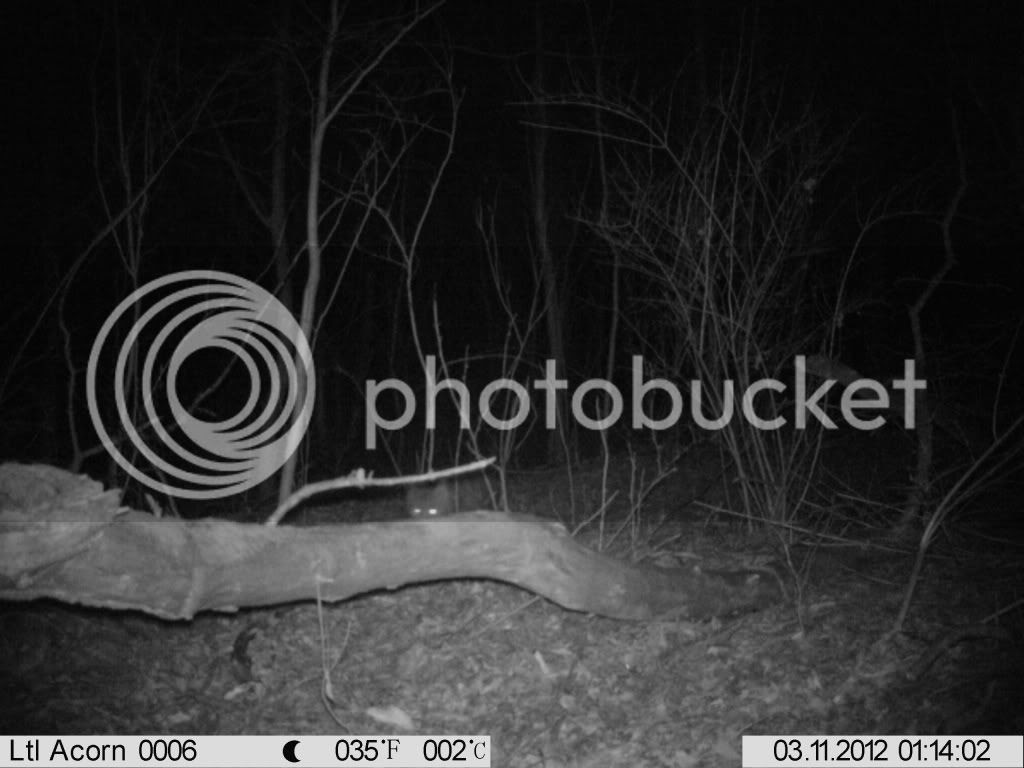 That is, of course, until I saw this picture.... 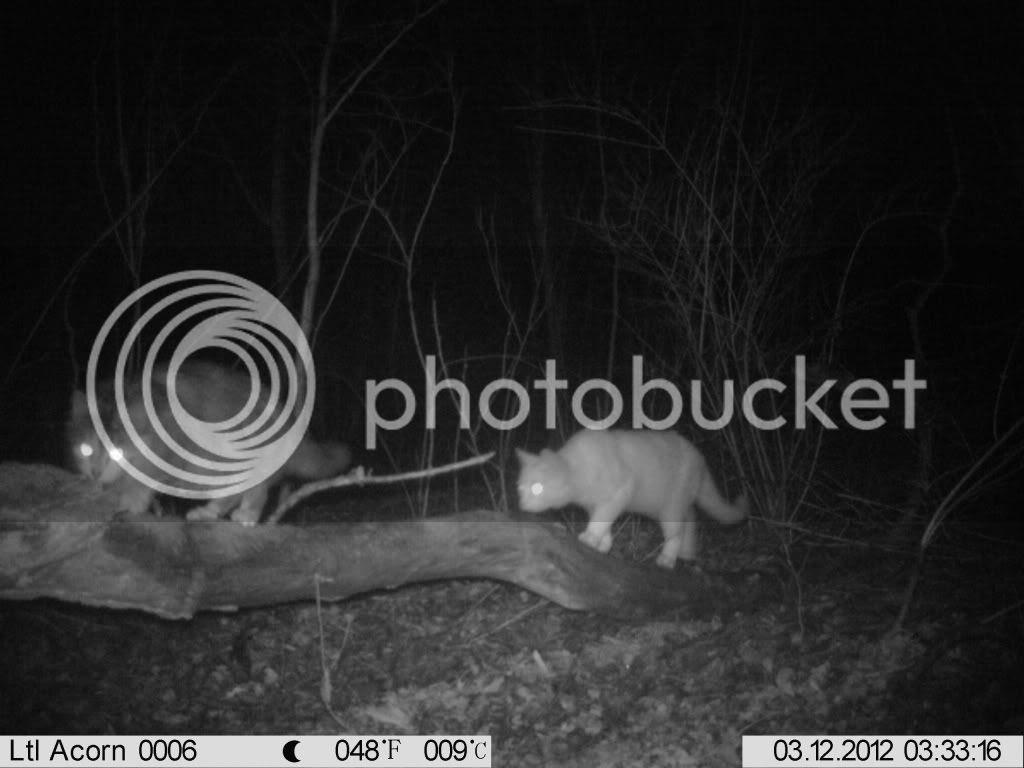