More Box Turtle Stories? Not Quite!

I had mentioned at the end of my recent Turtle Dog post, that there would be more box turtle stories to share.  Figured it was about time!

Earlier in the summer my students and I had another opportunity to work with our state regulatory agency to conduct some rare reptile surveys.

This time, however, we would not be fortunate enough to have Turtle Dogs along to help.  Instead we had a lot of humans, which we got together in a coordinated fashion to "pound the ground" looking for turtles.

Thus, we all met at a completely different site than the ones we had worked previously. 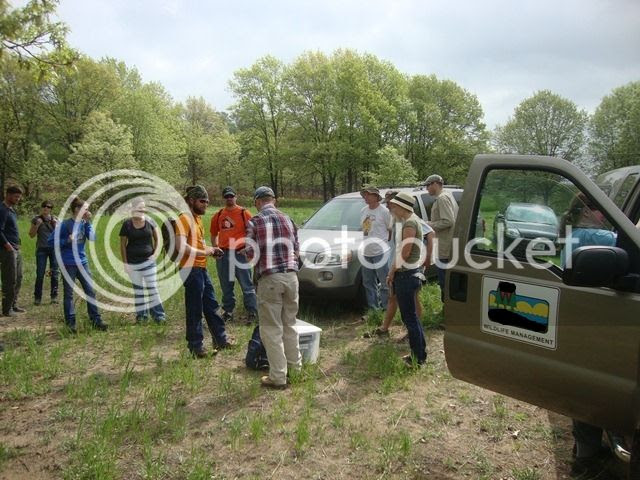 After a brief organizational meeting and a run-through of our objectives (find as many turtles as possible), we set to our task.  The habitats we would be working in were very cool...including some beautifully well-managed oak savanna.... 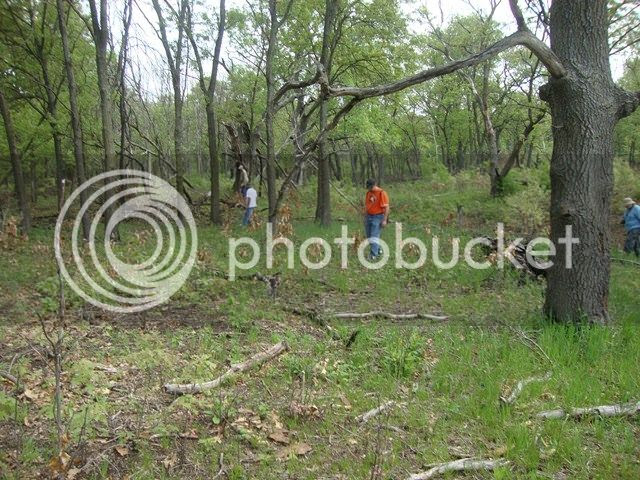 High-quality oak savanna habitat is something of a rarity these days.  The primary reason for the loss of such habitat is its conversion to agriculture and urban/suburban development.  But, there's still more that threatens oak savanna and prairie habitat: uncontrolled vegetative succession.
What is succession, you ask?
I'll have to keep this somewhat simple, to avoid making this post too long.  So, I'll briefly define succession as the directional change of a plant community from an early community of species that establish immediately after disturbance to a final community of species that are superior competitors.
The community that establishes immediately after a disturbance (such as a fire, or heavy grazing) is called a Pioneer Community.  Pioneer communities usually consist of colonizing species that have specific characteristics.
Eventually, other species, that perhaps grow taller (e.g., shrubs) enter the area....shade out the pioneers and change the species structure within the community.  An example would be a mowed field that is left untouched for years eventually growing in with shrubby vegetation.
In theory, successional change will continue to occur (i.e., the plant communities will progress from pioneer to climax) if no further disturbance happens.  Thus, over time this community will eventually change from a pioneer to a Climax Community.  The climax community is the final community an area can achieve post-disturbance....in other words, these species are the best competitors and will not allow new species to come in, out-compete them and replace them. The plant species in Climax Communities have the following characteristics:
One last important point: Although successional change is directional (i.e., moving from Pioneer to Climax Community) if a new disturbance happens, the community undergoing succession can be knocked back to its pioneer community (or some earlier successional state).
So, how does the concept of succession relate to the previously mentioned oak savanna?  Well, although too much disturbance is obviously a bad thing, not enough natural disturbance can be bad as well.  Habitats like prairies and savannas typically have a vegetation community that is in an earlier successional state when compared to woodland.  Thus, these habitats are dependent upon natural disturbance to persist.  Usually this disturbance comes in the form of natural fire or moderate levels of grazing/browsing by herbivores.  What this means is that even if a prairie or savanna parcel is protected from development, it must be properly managed or succession will occur until the parcel is no longer comprised of savanna.  So, legally protecting land is only half of the battle.  It is necessary to have the means and resources to effectively manage the prairie and savanna to keep it in an earlier successional state.  The typical management practices used on savanna and prairie include mowing, hand removal of vegetation (chainsaws, etc.), herbicide applications, and purposely starting (controlled) fires.
WHEW!  Sorry about the wordiness of this post!
Anyhoo...back to the story.....
The site we were surveying in had received appropriate management to maintain savannas.  For example, you can see the limited understory vegetation, yet mature trees, in the picture below.  This occurs because a controlled fire was used to kill back much of the small vegetation.  The large trees, however, are resilient to low-intensity fire and so they persist.  Management of this habitat is designed to keep the community in an earlier successional state in a way that specifically promotes oak savanna.﻿
﻿ 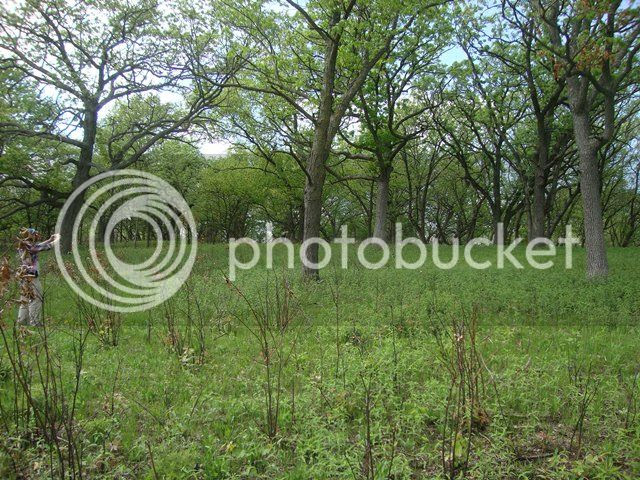 Interestingly.......this post about "Box Turtle Stories" doesn't have much ado about Box Turtles!

Not for lack of trying, however.

There were at least 18 individuals surveying at one point during the day.  We went over and back over locations on-site that exhibited evidence of box turtles.  The oak savanna habitats were surveyed intensively, as were the more open grassland/prairie type habitats (note the prairie below is starting to grow in with more woody vegetation, i.e., succession is occurring!). 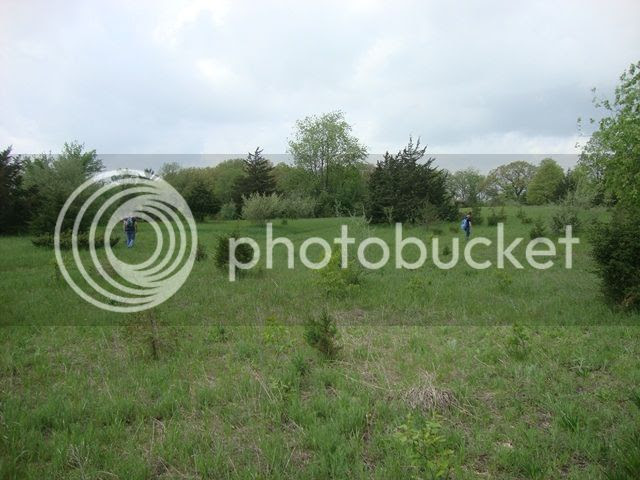 Some of the strongest evidence to suggest box turtles are around is the presence of fresh "forms" in the ground.  These are shallow burrows that the turtles dig in the ground for short-term respite from unfavorable conditions, or to sleep in at night. These forms usually don't go back very far, and they are shaped sort of like the profile of a box turtle shell.  We found plenty of fresh forms on-site during our surveys (see below), so we knew box turtles were active in the area. 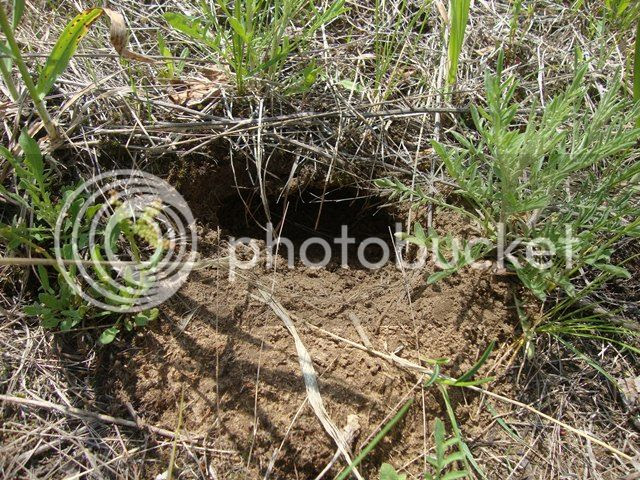 One would think that 18 competent surveyors vs. a slow-moving innocuous reptile would be a contest stacked heavily in favor of the humans.

Despite the fact that we knew there were box turtles in the area, and found fresh evidence of them when we arrived, not a single box turtle did we see!!

We DID find other reptiles (one of which was possibly even better than finding a box turtle.....more to come).  For example, we found several beautiful Smooth Greensnakes (Opheodrys vernalis). 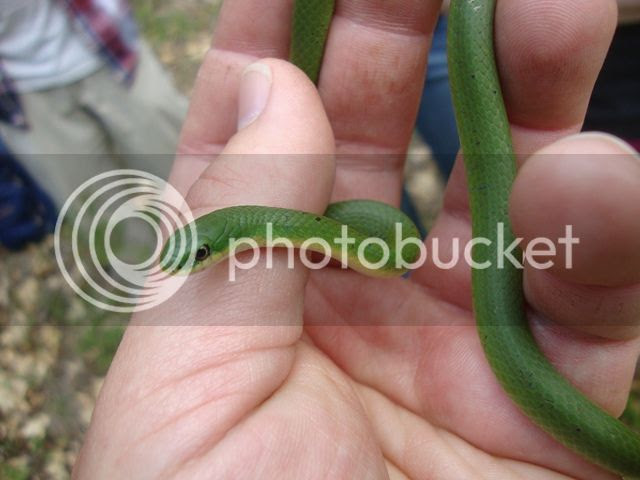 This species is mostly insectivorous (eats insects) and prefers the shrubby edges adjacent to grassland/prairie, as in the picture below. 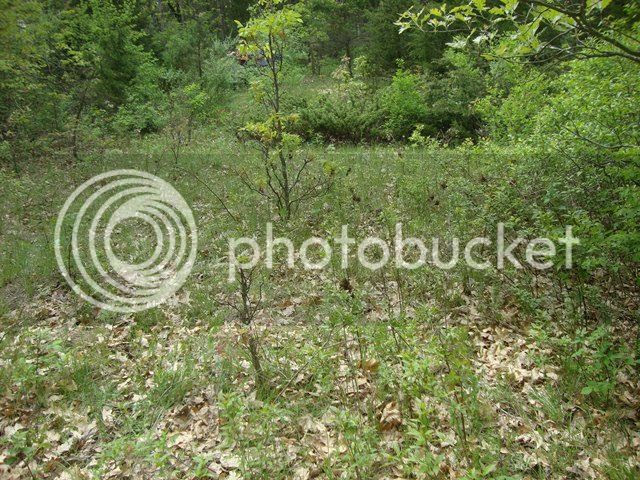 Let me tell you, there are few species that are harder to find than a green-colored snake that hangs out in the grass! 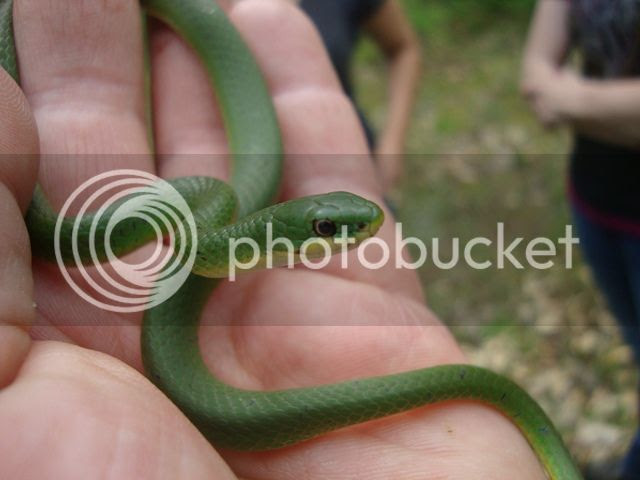 We also found a nice little juvenile Eastern Hognose Snake (Heterodon platirhinos).  Note the upturned scale on the tip of the rostrum (or "nose").  This gives them the appearance of having a "nose" similar to a hog....or that's how it appeared to the person that named them! 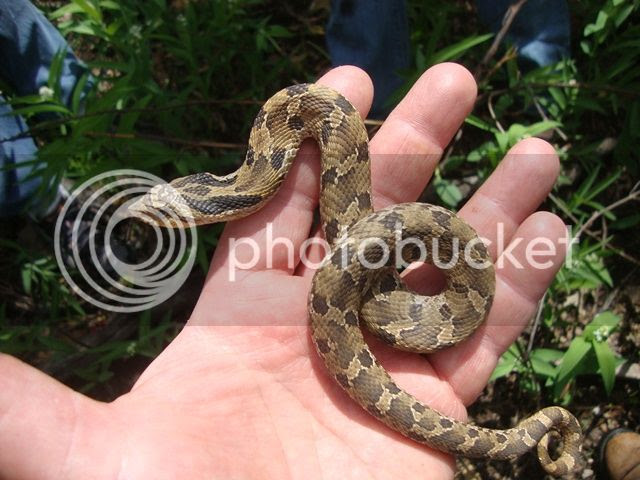 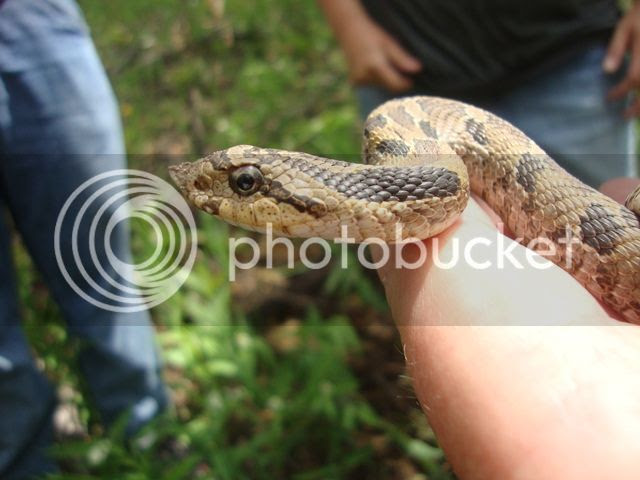 But those weren't even the best finds that day! 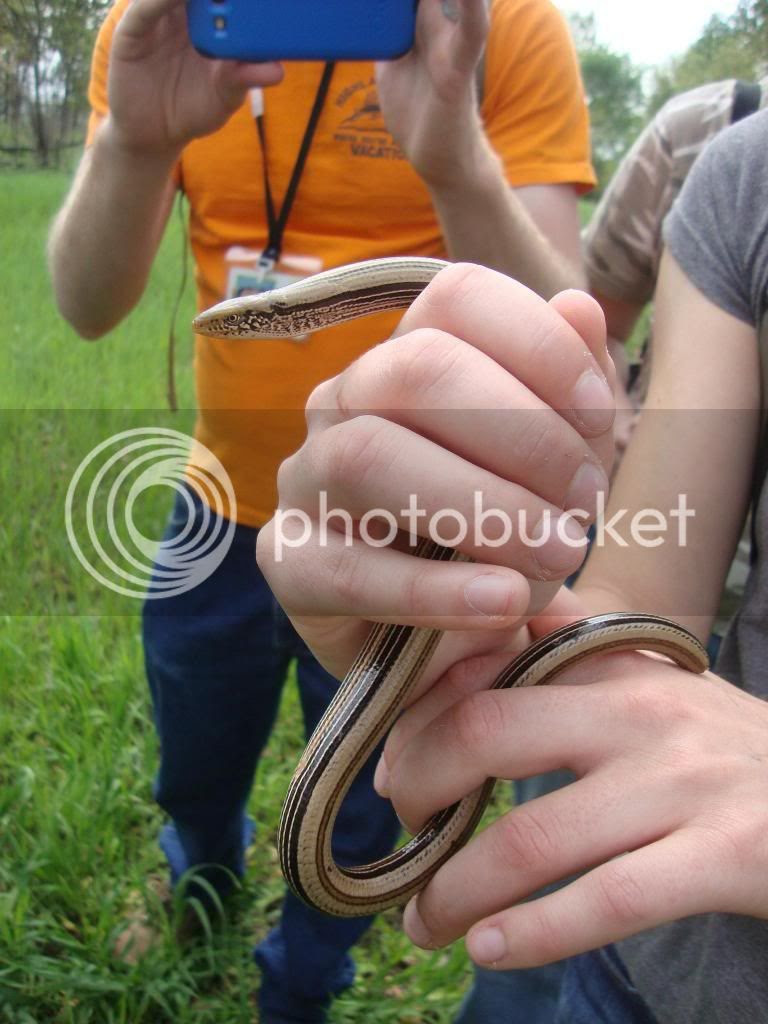 What we have here is a leg-less lizard....the Western Slender Glass Lizard (Ophisaurus attenuatus attenuatus).  An incredibly rare find in our neck o' the woods!

So, how can we tell this is a lizard?  Superficially, it looks just like a snake.  Yet, there are certain clues that belie this critter's ancestry....

First, all lizards have a hole on each side of the head, which is essentially an ear opening.  Snakes have no external ear-opening.

See the hole circled in red below?  You have to look carefully! 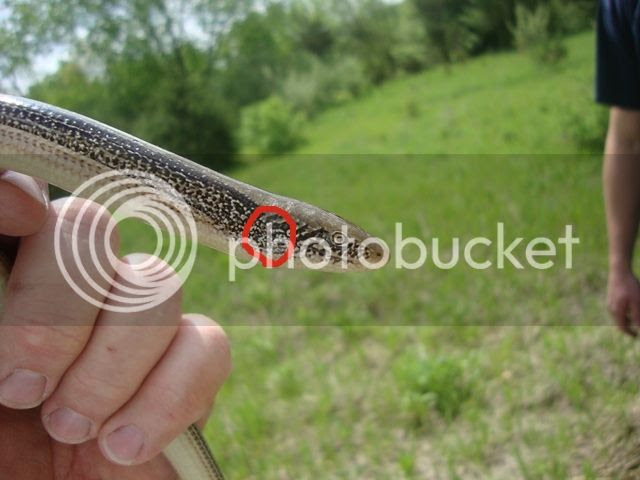 Lizards also have movable eyelids, something that snakes don't possess.  In other words: lizards can blink.  Obviously, I can't show you moving eyelids in still photos, so you'll have to trust me that these lizards can blink!

There are other differences too, but this is good enough for the current blog post.

These interesting little critters are not only hard to find, they are hard to catch.  At certain times of year (such as late spring) they have a tendency to sit concealed in the thatch of short grasses.  This provides them with cover and allows them to still soak up the sun.  It also makes them incredibly difficult to find.  Usually one only sees these lizards if they are almost stepped on, which prompts them to make a quick break for it.  The motion gives them away and they can be located.

In addition to their cryptic nature, there are two other difficulties a glass lizard surveyor must deal with: (1) they are incredibly fast, (2) they have the ability to perform caudal autotomy (i.e., break off their own tails when captured).  Why?  The tail, after separated from the body, continues to thrash and twitch....presumably to distract the predator and allow the lizard to escape.  The ability to break off pieces of their body is also apparently the origin of the name "glass" lizard.

We don't want them to loose their tails if they don't have to.  The tail takes a while to regenerate.  Better if they use that strategy when it really counts (i.e., avoiding a real predator).  Yet, if one is incredibly gentle when capturing and handling the lizard, they are much less-likely to drop their tails.

So, capturing glass lizards requires a quick, but careful, response. 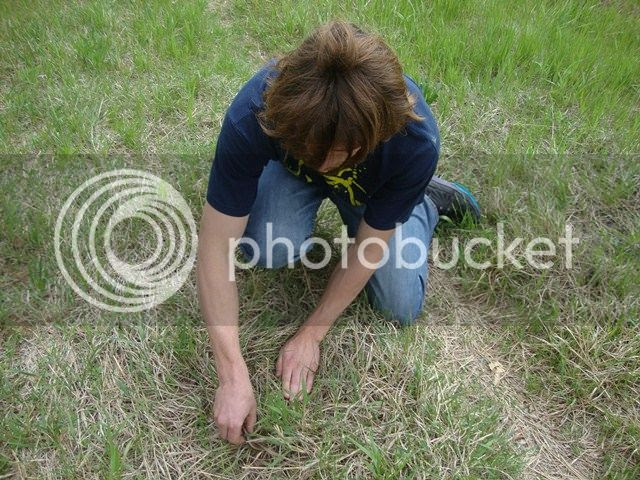 We actually found a fair number of glass lizards, which was even better! 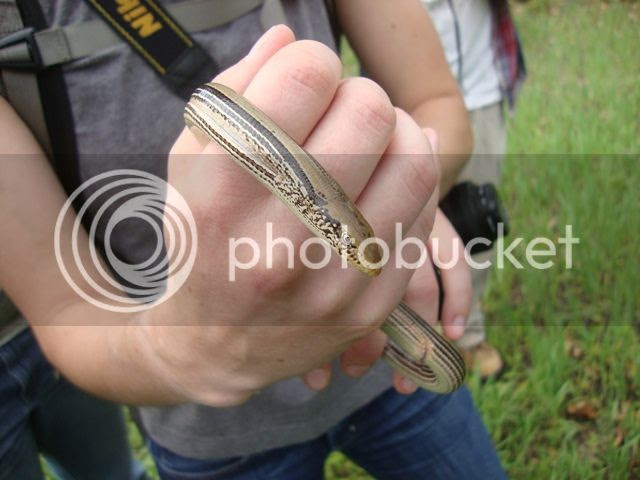 I tried to explain to my students that I had seen less than five of these lizards in my entire life up to that point.  On that day, we found 10!!!

On at least one occasion, there were two right next to each other...... 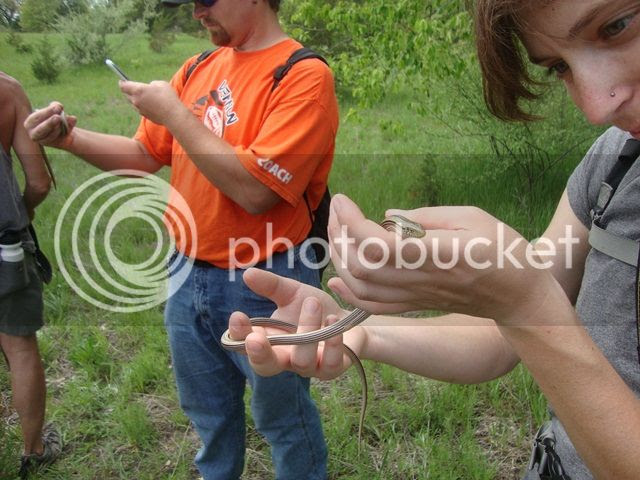 ...and so ended our second effort at finding box turtles.  Although not a box turtle was found, we still got some great wildlife captures!

There's still one more small box turtle story to tell, but I'll save that for a later date.
Posted by Trailblazer at 10:16 AM