Wildlife Trackin' and Some Scat To-Boot!

We often observe lots and lots of random mammal sign when going about our daily field activities.

At one of the sites where we have drift fences installed...there's a beaten down path that we follow back to the fence arrays.  This path is often muddy and can be a great place for tracks.  This week we found some rather nice Mink (Neovison vison) tracks.

The tracks below are a double-register (where the back foot lands almost directly on top of where the front foot had been), which is why there appears to be so many toes in this track.
﻿
The tracks below show the front and back foot with better separation. Here you can pretty clearly see the five toes from each foot, which helps identify the tracks as belonging to a Mustelid (weasel/mink/otter family).
﻿
Other critters have five toes....such as the very common Raccoon (Procyon lotor).  Yet, Raccoon toes tend to be (proportionally) much longer than the toes of Mustelids.  Raccoons also have plantigrade locomotion/stance, where the entire podials and metapodials (basically the entire soles of their feet) come into contact with the ground at each step.  This creates a long flat impression, compared to the Mink above.

In fact...see the pictures (below) of a Raccoon hind foot from a roadkilled individual I happened across back in North Carolina several years ago.  Note how these feet have long fingers and very long "soles".....  You can also see the types of imprints Raccoons make in the third picture below.  See the long toes and long foot impression (the key in the picture is almost exactly 3 inches)?

﻿As we reached the banks of the stream we have to cross during our trek, we came across a possible Mink scat (likely from our little friend whom left the tracks).  Note the bits of crayfish and possibly some snailshells in there.  Seemed too small for Otter scat to me.  Couple this with the nearby tracks, and I'm leaning towards Mink on the ID for the scat.
﻿
Of course, these fuzzy cutesy critters can also be a wee bit O' trouble.  Something ate half of a snake captured in our drift fence trap the day we found the tracks.  I'm hoping a Raccoon, just because I don't want to have to blame the Mink, which I have such a soft-spot for :) .....but regardless, this could become a problem.
﻿
The students working on the Wolf Project also see lots and lots of cool tracks when up north.  The soils up there are very sandy, which can be great for tracking.

They see the tracks of Wolves (Canis lupus).  The ones below were apparently freshly laid over their tire tracks when they returned to the campsite after an evening of field work.  The thing I really like about this picture is it clearly shows the obvious "X" (between the toes and inter-digital pad) that is indicative of canine tracks.
﻿
﻿

They also see lots and lots of nice Black Bear tracks (Ursus americanus).  Bear tracks are fairly obvious and easy to identify.  They are big, first of all....and sort of pigeon-toed.  There's nothing like them at that size in our neck o' the woods.
﻿
This last picture above is great.  There are a few different critters in there.  The Bear and White-tailed Deer are obvious.  There is also a bird (to the right), that could be a Wild Turkey, a Sandhill Crane....or perhaps a Great Blue Heron.  There are also some smaller tracks that are hard to identify, but Bobcat is not out of the question.  The tracks are comparable to Bobcat tracks, although there is barely a hint of maybe a fifth toe (and the Bobcat has only four toes).  Yet, the gait could be what Paul Rezendes shows as a "fast walk" for the Bobcat on Figure 7.15 (1999, Tracking and the Art of Seeing; Harper Collins Publishing).

Another mystery!  Any thoughts on ID of those tracks are welcome!

Oh yeah....and just for the heck of it....thought I'd tell you that we caught an Eastern Milksnake (Lampropeltis triangulum triangulum) in the drift fences today.

I also thought you'd enjoy knowing how much it appreciated being caught. 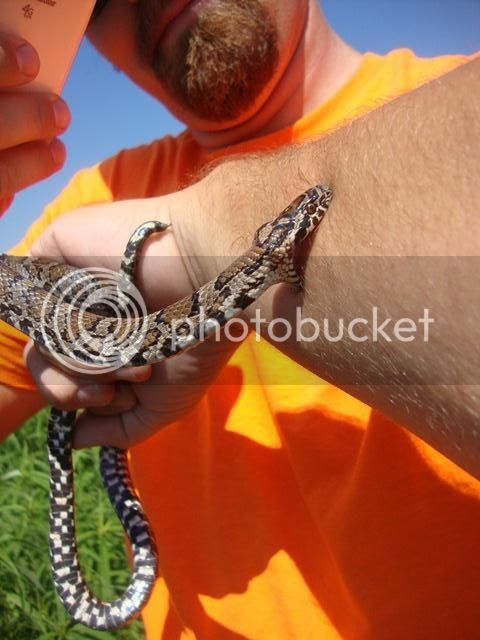 Posted by Trailblazer at 4:43 PM