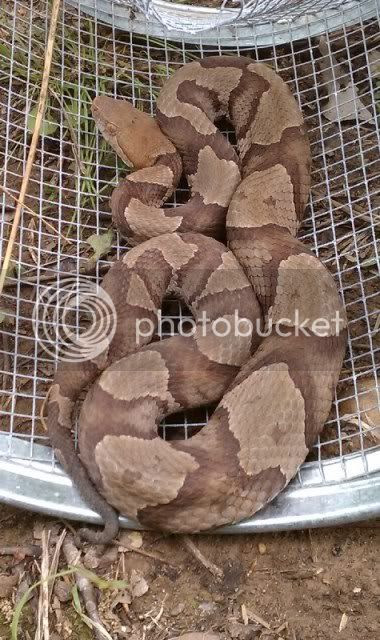 Photo courtesy of M. Forsberg.
Checked the drift fences with two of my students on Friday, May 13th.

We were all excited to find a Copperhead (Agkistrodon contortix) in one of the funnel traps.

The individual was a sub-adult female.

In our neck of the woods, it's a relatively common species and may even end up in suburban/urban areas.


As a venomous snake, Copperheads are often treated harshly by humans.  Even by folks that claim to like "wildlife".  I can understand the fear venomous critters promote and, as a father, I can understand the concern folks have about them in suburban/urban landscapes.  I wish there was a good solution for this problem....but there doesn't seem to be.  This is mostly due to the fact that there's not many places to go in the eastern US if you're a snake that aren't frequented by...or at least visted by.....people.

This means there is lots of potential for interaction between humans and things that may accidentally do humans harm.  I say 'accidentally' because, let's face it, venomous snakes don't seek out humans to bite.  Bites occur when the snake is threatened.  Unfortunately, the snake may feel threatened even if you don't know it's there.  The Copperhead blends in so well, that it's not suprising folks unknowingly step on them, or place their hands near them.

But, to put this in perspective, I've spent literally hundreds of hours at my study sites near campus, which are confirmed Copperhead locations.  These sites are comprised mostly of good Copperhead habitat (better habitat than found in many urban/suburban backyards).  Despite this, I have yet to just walk up on one in the field, and all of the individuals I've seen were captured in drift fences.  I imagine I've walked by oodles of them without knowing.

Regardless, dealing with a Copperhead in your backyard is a much different issue than killing a Copperhead that you happen to come upon while hiking in the woods.

Regardless....if one can separate themselves from the fact that it's a venomous snake, its an incredibly handsome critter. 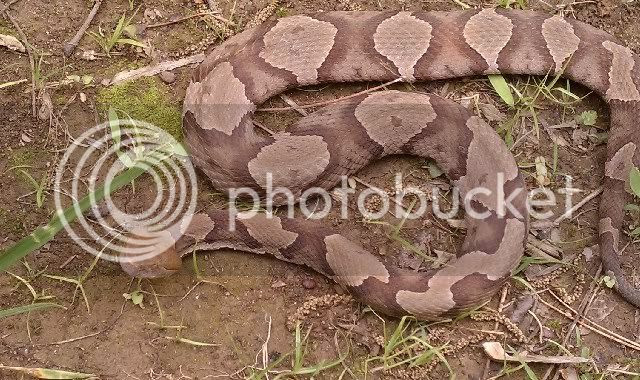 Photo courtesy of M. Forsberg
Posted by Trailblazer at 6:12 AM