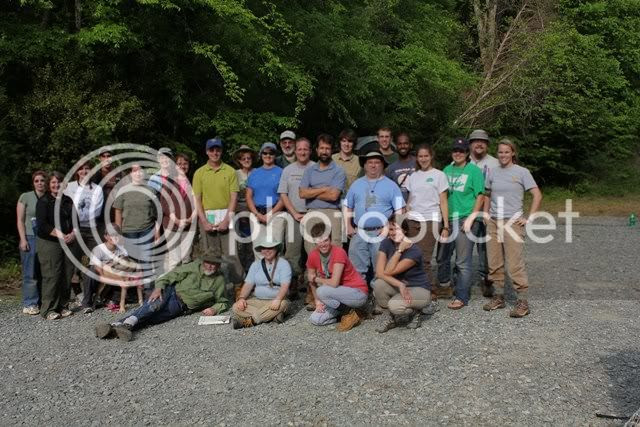 Above: the attendees of the 2011 wildlife tracking and survey workshop.
Photo by M. Schriber 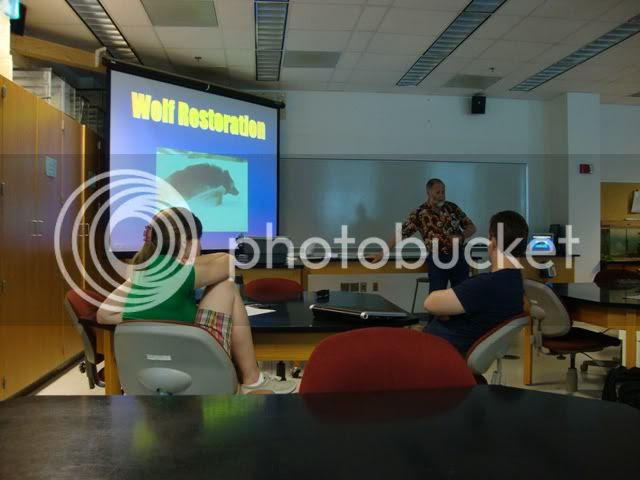 Above: Dr. Jim Halfpenny speaking in-class to students about the wolf restoration project in Yellowstone.

Dr. Halfpenny is a nationally-renowned carnivore ecologist and expert wildlife tracker.  He lives in Montana, and is the president of A Naturalist's World (ANW).  Currently, he conducts a large number of ecological workshops across the western hemisphere through ANW that are designed to educate folks about mammals, ecology, and conservation.  His expertise and research experience includes bears, wolves, cougars and....what he is most famous for...wildlife tracking.  Jim wrote the book (well, several books) on wildlife tracking.   One of my favorite field references is a book written by him in the 1980's called:  A Field Guide to Mammal Tracking in North America.   I refer to it often (and even reached full-blown geek Nirvana when Jim recently signed my original copy of this book).  Jim's written many updated books on tracking since and a search for "Halfpenny" on Amazon.com will result in several great pieces of literature.

I had my first email correspondence with Jim as a result of The Beast in the Garden.  It's written for the lay-person, and so I have had students in my non-science major Wildlife Conservation class read it and discuss it.  One day I figured it would be cool to see if I could get some thoughts from the folks involved in the events outlined in the book.....just to determine if their feelings have changed over the past twenty years.  I figured this was a complete shot in the dark...but hey...no harm in checking.  Jim responded to my query pretty quickly.  After answering my questions, he mentioned that he conducts educational workshops about cougars and many other topics related to tracking and carnivores all over North America.

From that first conversation, we ended up hosting one of Jim's Cougar Ecology workshop here last year.  It was well-attended and very successful.  So this year, we decided to do another workshop, but change the topic slightly.  As such we went with a basic tracking skills workshop.  Eventually, we came to the conclusion that, to keep all of the attendees we were hoping to attract busy for the whole two-days...we'd have to split them up.  This meant I'd have to teach half of them some stuff for part of the time, while Jim worked with the other half (then we'd swap student groups).  And...hey...who isn't interested in co-teaching a workshop with Jim Halfpenny?

My contribution involved the basics of small vertebrate survey techniques.  The idea being to give the attendees experience with these techniques in the field.  This inlcuded: drift fences, cover boards, Sherman traps, turtle traps, and hints on visual surveys.  We targeted amphibians, reptiles and small mammals because I already had survey equipment deployed at a site near campus for these critters.  I also showed the students how to use radio telemetry equipment (they tracked the box turtles I have on the air at the same site).

The workshop was jam-packed with "stuff" (both for the instructors and the students).  It was about 50/50 lecture and field work.

We started in the lecture hall.  It was here that Jim discussed the history of tracking, the anatomy of animal tracks, and ways to identify species by tracks.  I also went over a variety of survey techniques for large, medium and small animals (a very basic overview).  After a morning inside, we went out into the field. 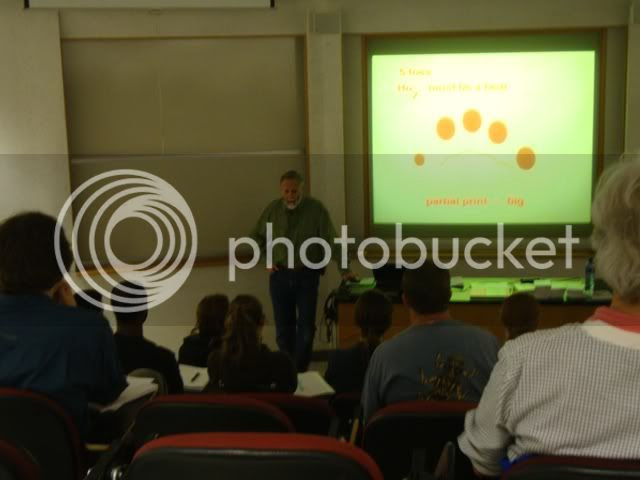 Tracking in the field: There had been a big storm here two nights prior to the workshop.  Thus, the stream beds and dirt trails that are usually riddled with tracks had been wiped clean.  It took alot more work for the students to find tracks then I had hoped, but most seemed to be able to work with this. Jim instructed them on finding tracks, identifying species, and the making of plaster track casts in the field. 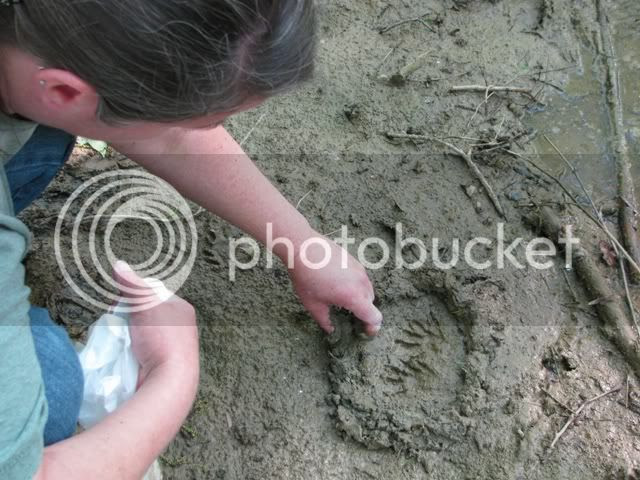 Above: preparing the area to create a plaster cast of raccoon tracks.
Photo by V. Vickers. 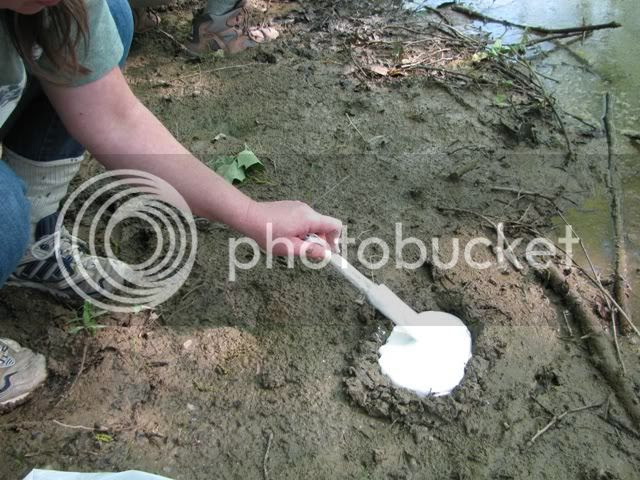 Above: pouring in the plaster.
Photo by V. Vickers. 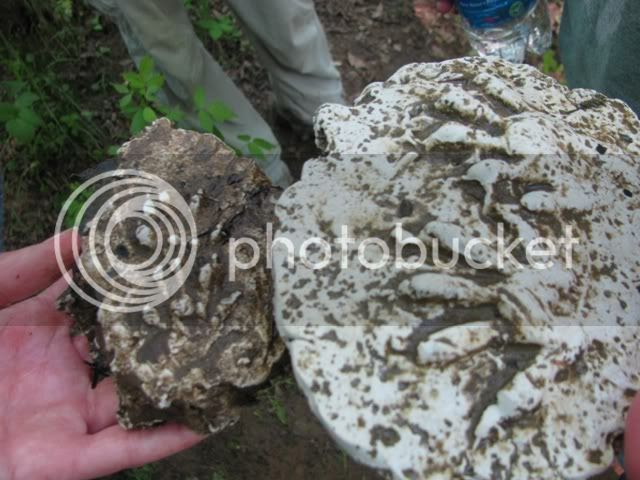 Above: The Final Product!
Photo by V. Vickers. 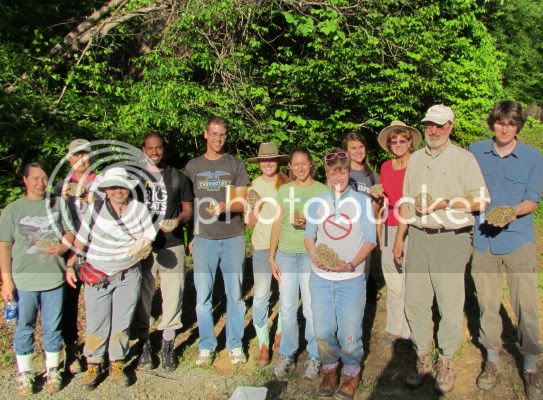 Above: Group 1 displaying their plaster casts.
Photo by S. Habel.

Radio Telemetry:  Workshop attendees were exposed to the basics of radio tracking animals in the field.  Although this involves slightly different skill-sets depeding on whether one is tracking small vertebrates or large vertebrates, the principles are the same.  The class tracked eastern Box turtles (Terrapene carolina) and learned the very basics of what this entails. 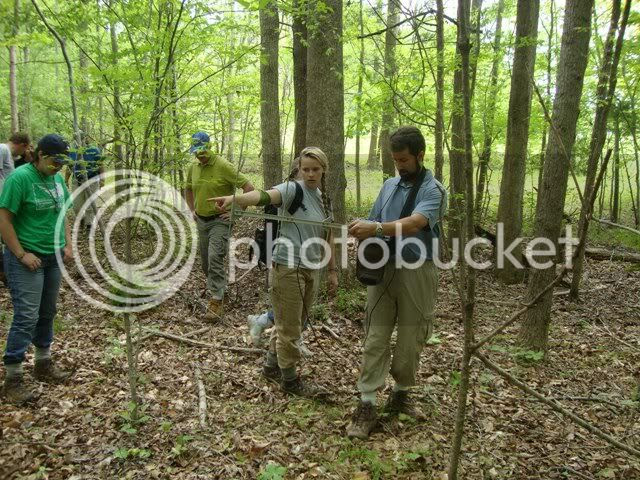 Above: Locating a turtle with the telemetry equipment. 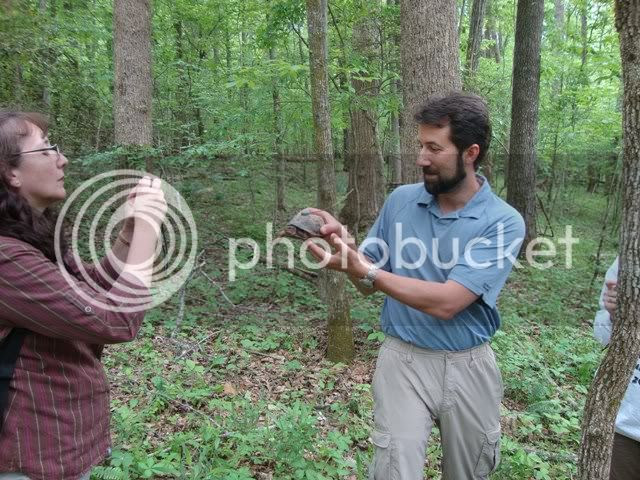 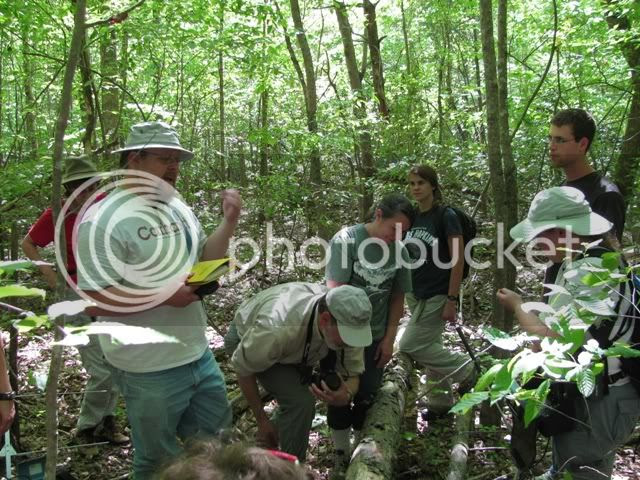 Above: recording data on a located box turtle.
Photograph by V. Vickers 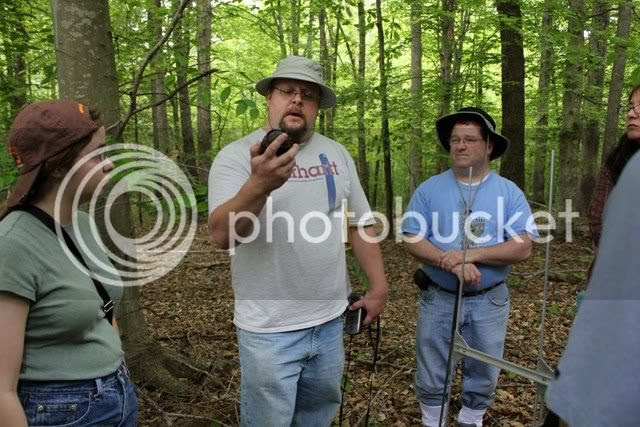 Above: reviewing marking techniques for turtles.
Photo by M. Schriber 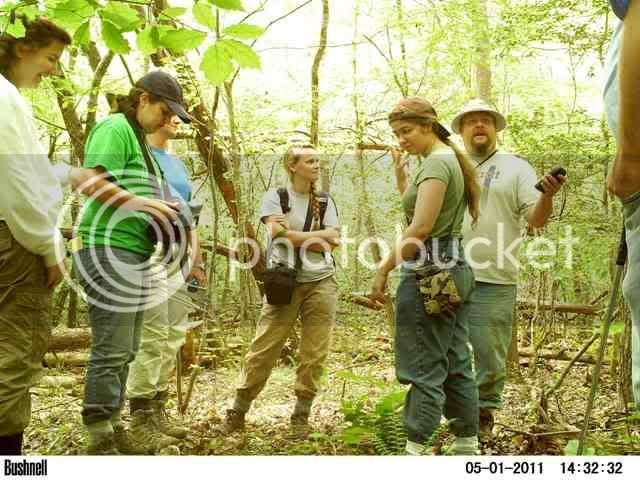 Above: A 200 acre woods to roam in, and one box turtle we tracked decided to hang out directly in front of a camera trap!  As a result, there are a bunch of pictures of the students on this camera!

Day 2.
We started the second day off with lecture again.  This time Jim covered specifics about animal gaits, and how to follow and read trails left by wildlife.  This involved Jim actually getting down on his hands and knees with cards that represented front and hind foot prints....these he laid on the floor as he stepped (or crawled) showing  students the relationship between how an animal walks and where the foot prints end up.  This information prepared the students for field exercises. 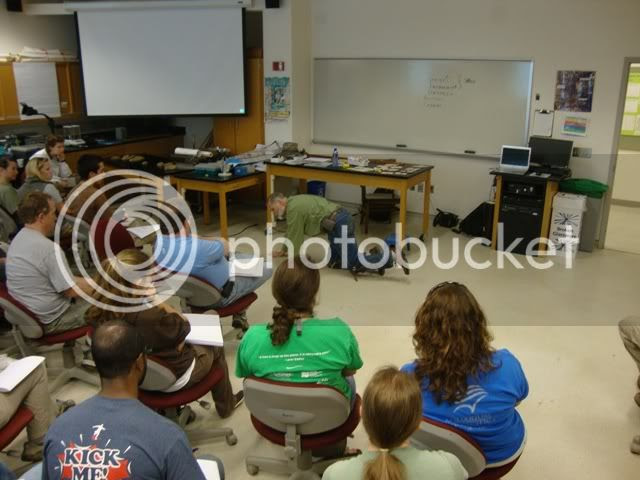 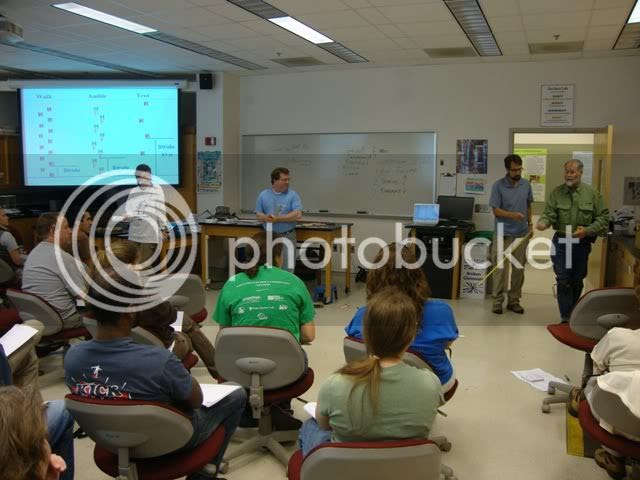 We took a brief break at the field site for lunch before plunging in to more field work. 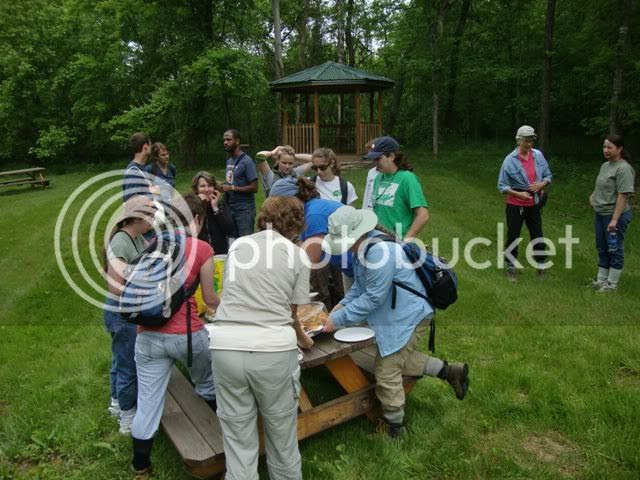 Understanding Gaits and Following Animal Trails in the Field:  Due to the rain storm that occurred right before the workshop, there was a real lack of tracks and trails out at the site.  Therefore, Jim requested that a medium-sized, well-behaved dog be brought to the workshop to simulate wildlife trails for day 2.  Luckily one of the students had just such a pooch!  Thus, the ground was prepared in an area with good soil, and the domestic canine was used to create animal trails for the students to learn from.  The dog was walked, trotted, sprinted, and etc....each of which left a different series of tracks in the dirt to be deciphered. 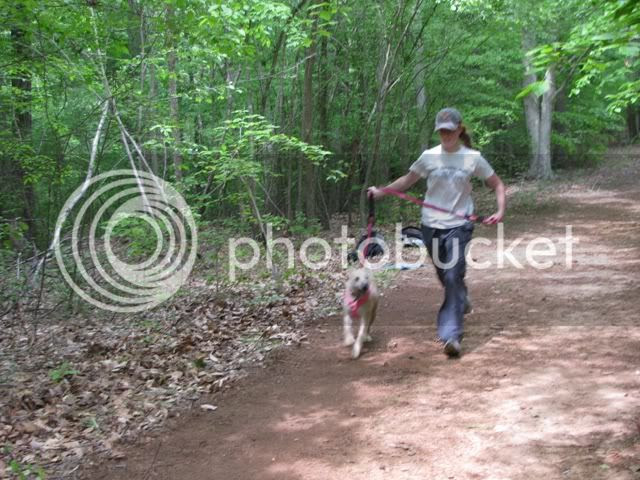 Above: using a pet dog to create trails in the field
Photo by V. Vickers. 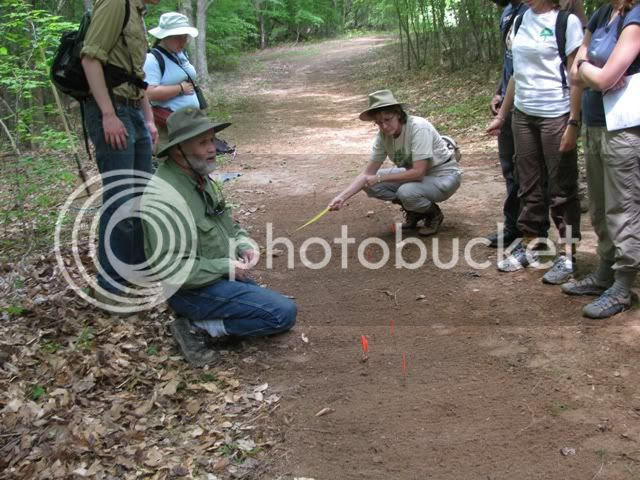 Above: flagging the dog tracks.
Photo by V. Vickers 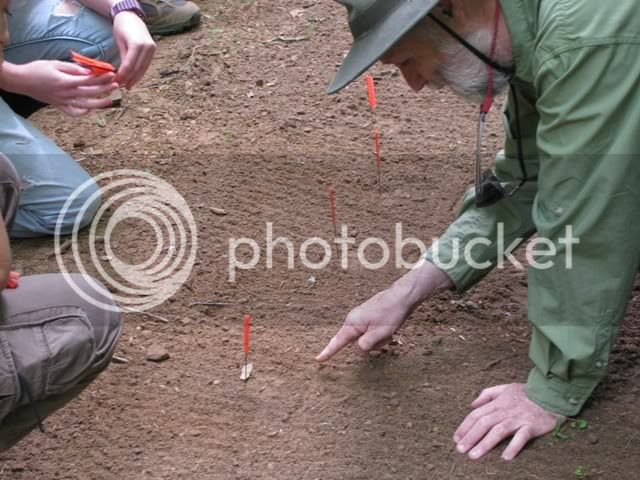 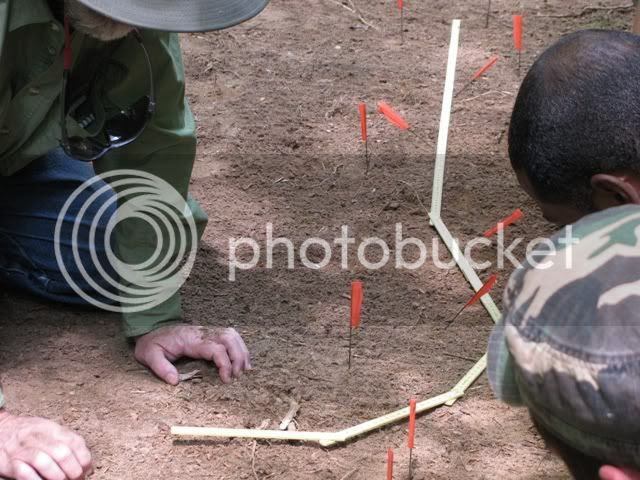 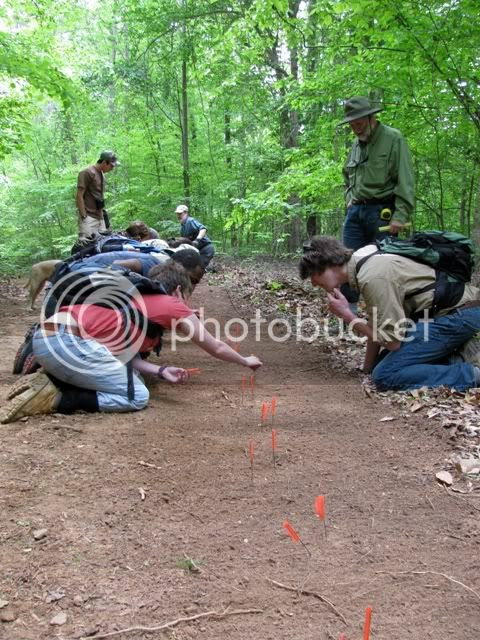 Above: students scrutinize the trail left by the domestic canine.
Photo by V. Vickers

Conducting Small Animal Surveys in the Field. Students were exposed to variety of small vertebrate surveys in the field...focused on amphibians, reptiles and small mammals.  We discussed effective incorporation of various pieces of equipment, hints for deployment/installation, the best times to conduct surveys with specific equipment,  the best baits (if applicable) and how to deal with the captured animals. 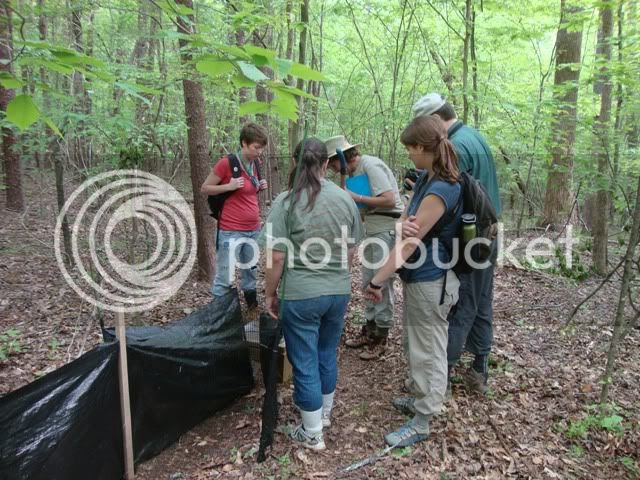 Above: Checking traps along one of the drift fences on-site. 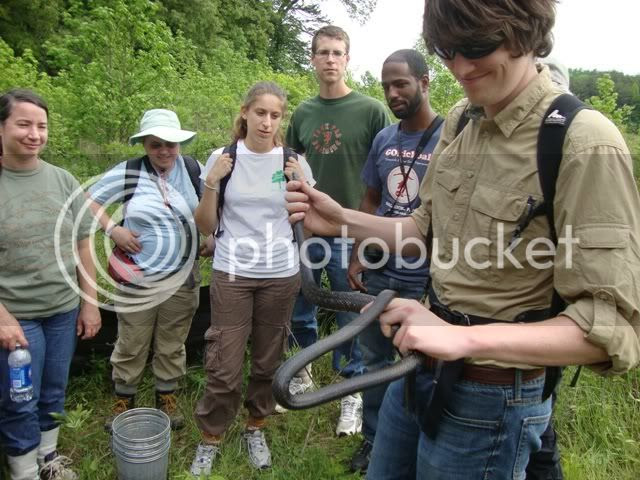 Above: an Eastern ratsnake (Pantherophis alleghaniensis) captured in a drift fence. 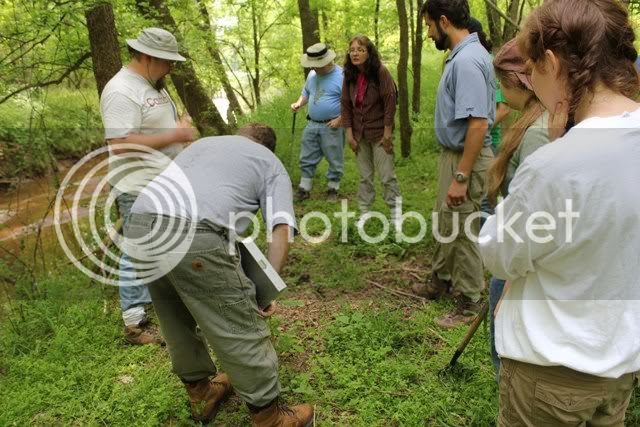 Above: checking out an otter latrine (Lontra canadensis) during visual surveys.
Photo by M. Schriber

A good time was had by all (I think), and the workshop participants got exposed to alot of new skills (I hope).

My only regret is that I didn't get to make plaster casts or do the gait stuff that the students experienced!

The downside of being a facilitator and co-instructor!
Posted by Trailblazer at 12:46 PM