Although we caught more than what I'm going to show...these were some of the week's highlights from our drift fence and coverboard surveys.﻿
The Northern Watersnake (Nerodia sipedon): ﻿This very common species can occur in just about any lowland habitat in our region (swamps, ponds, marshes, streams, rivers, resevoirs, etc.).  Although it's always a treat to catch them, it's not neccessarily unusual.....except the circumstances under which we captured this individual.  We usually throw funnel traps into ephemeral wooded wetlands at the study sites to catch amphibian larvae.  These funnel traps have been chalk-full of salamanders larvae lately (Ambystoma maculatum larvae).  This juvenile watersnake was captured inside one of those funnel traps in the wetland, which shocked the heck out of me when I pulled it out of the water.  He was probably taking advantage of a captured food source....but I guess he couldn't figure out how to get himself back out!
Note the vaguely triangular-shaped head that occurs when the animal is threatened....this superficially resembles a venomous snake.   Unfortunately for the watersnake, its penchant to be alittle nippy and the tendency to flatten its head when threatened reminds folks of a venomous snake (often a Cottonmouth).  Thus, the harmless watersnake is often treated as harshly as venomous species are. 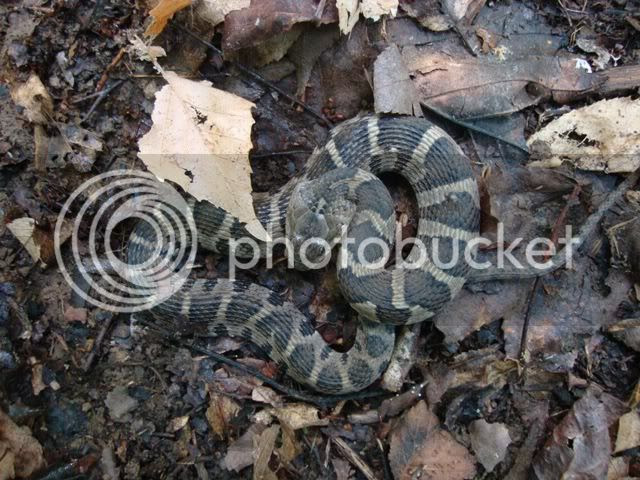 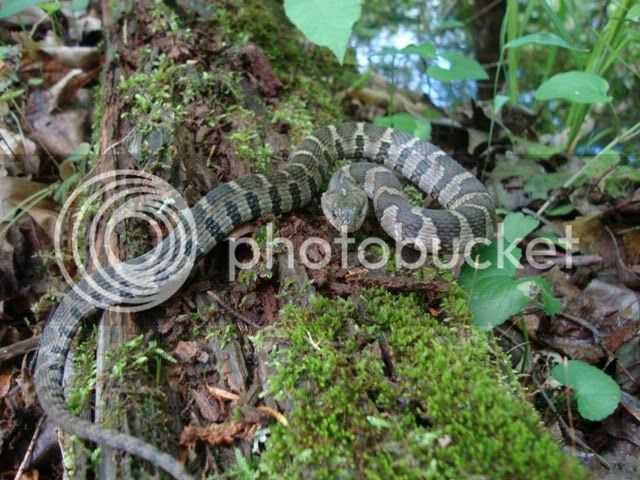 Fowler's Toad (Bufo fowleri) is a species that I had no experience with prior to moving down south.  The individual pictured below was hopping along the trail as we walked into the site earlier this week.  They are superficially similar to the American Toad (Bufo americanus), which is also common in this region.  Interestingly, though...at this particular site almost all of the toads I find are Fowler's, not Amercan Toads.  Not sure why.  The habitat is good for both.  I can't imagine they competitively exclude eachother. 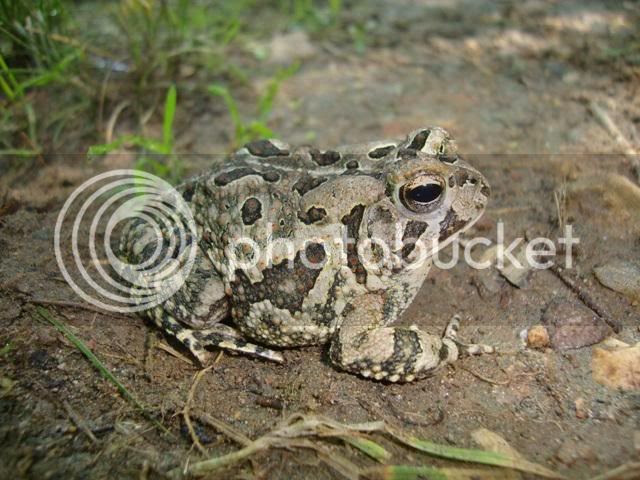 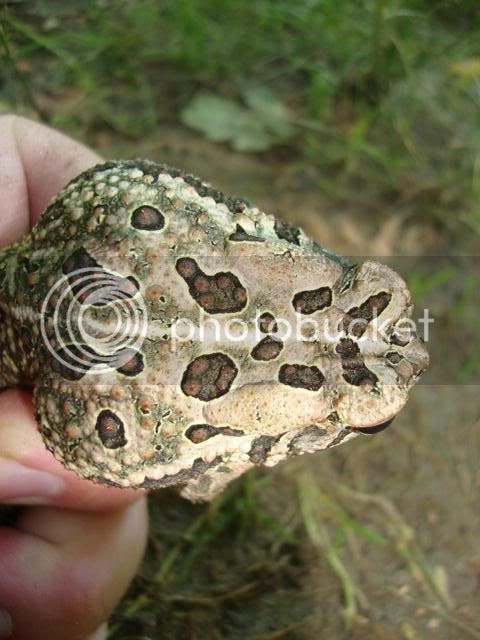 Also, the Fowler's has relatively small tubercules (or "warts" or bumps) on their legs, as below.  In contrast the American toad has large tubercules in this region. 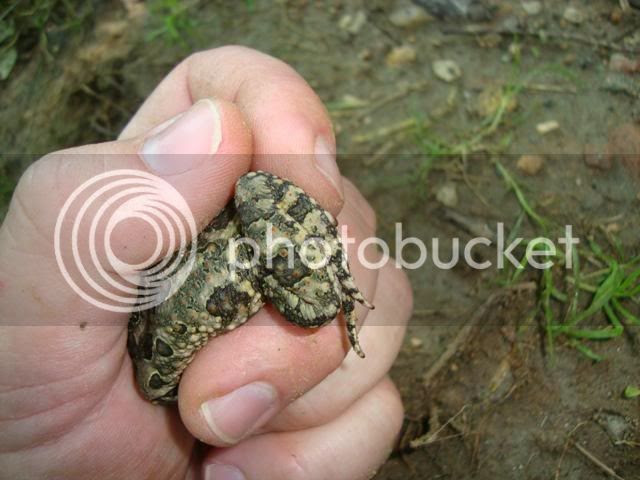 For comparison, see two examples of American Toads that I captured at a different site last year.   Note the 1-2 tubercules in the dark circles on the back.﻿ 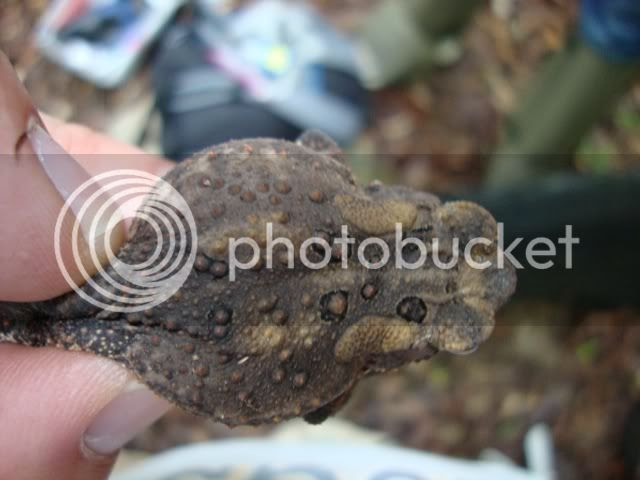 Juvenile White-Spotted Slimy Salamanders (Plethodon cylindraceus) were very common under the woodland coverboards at one of the sites this week.  I've posted about capturing them in the past too (see A Good Day for Herps posted on March 23, 2011). 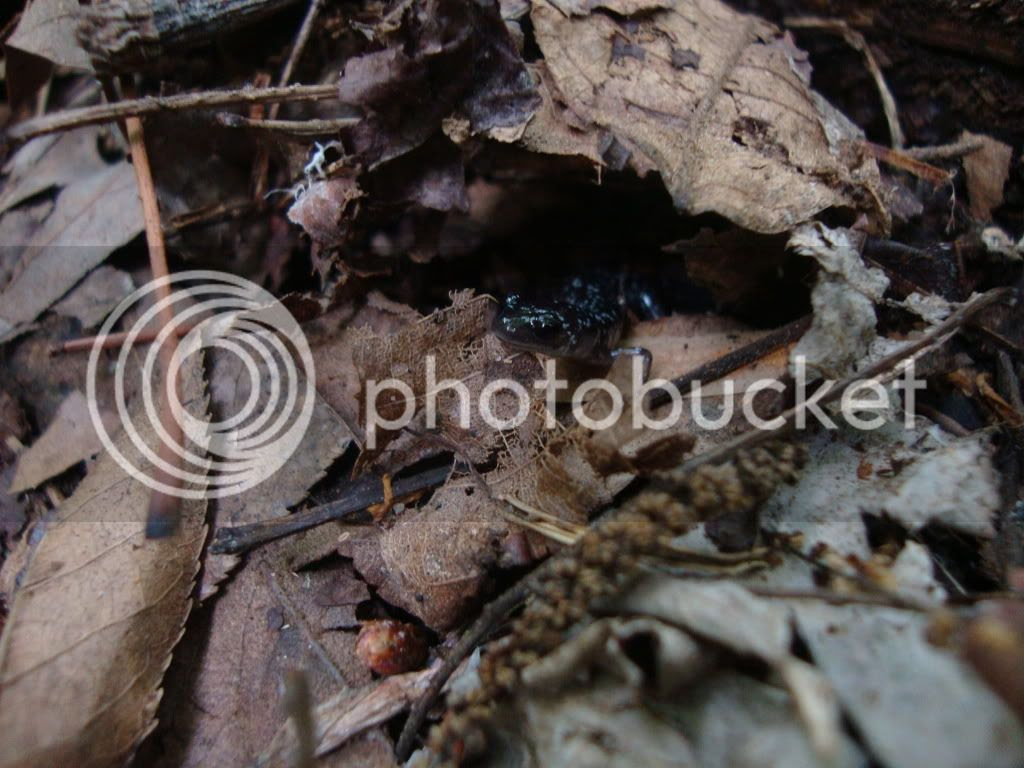 ﻿The Spring Peeper (Pseudacris crucifer) is a relatively common species, but one that hadn't been detected at this site until this week.  Last year, I found them at the other site nearby.  The individual below was captured while searching for box turtles in a lowland deciduous forest.  This species can exist in very high densities back home in Wisconsin and I am used to finding hundreds of them in the spring.  This does not seem to be the case in my experience here in the southeast to-date.
As an aside, the specific latin name of crucifer refers to the "X"-shaped mark on their back (second picture below). 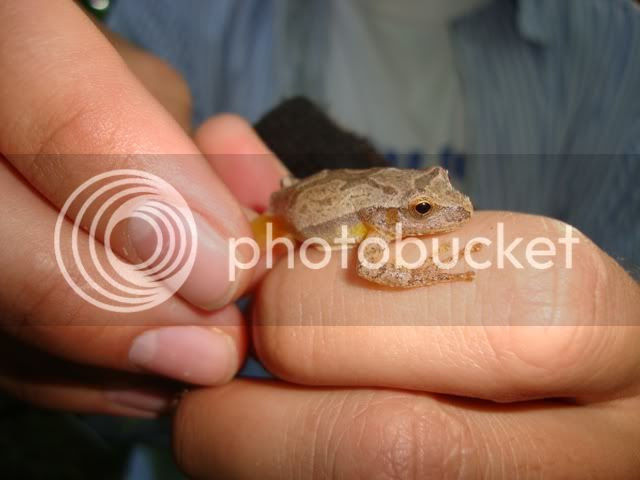 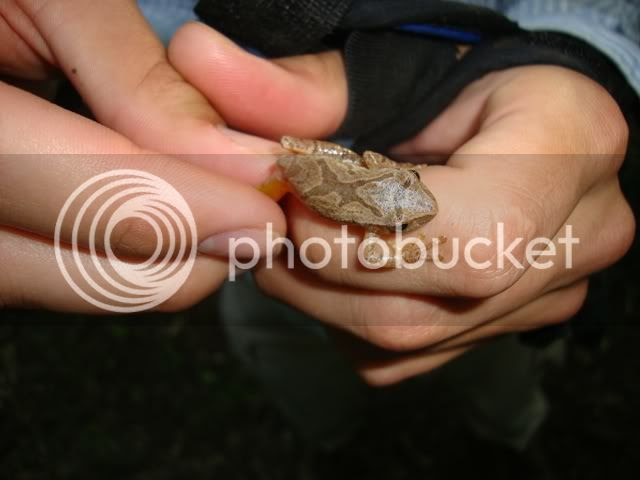 The Eastern Harvest Mouse (Reithrodontomys humulis) is not the most common rodent species we encounter at our sites.  Usually, that is reserved for the White-Footed Mouse (Peromyscus leucopus), which we catch frequently in drift fences, under coverboards and in Sherman Traps.  Every so often, however, we get alittle Harvest Mouse.  The individual below was captured in a pitfall trap of one of the grassland drift fences we're running.
Some general rules for distinguishing them from the white-footed (aside from the obvious fact that white-footed mice tend to have lighter, more whitish feet):  the ears aren't (proportionally) as large in the Harvest Mouse as in the White-Footed Mouse.  Also, the light fur on the underbelly of the White-Footed is more clearly delineated and comes higher up onto the sides than on the Harvest.  Finally, they can be distinguished by habitat.  While the White-Footed is most often encountered in woodlands, the Harvest Mouse is more common in grasslands, old fields and field edges. 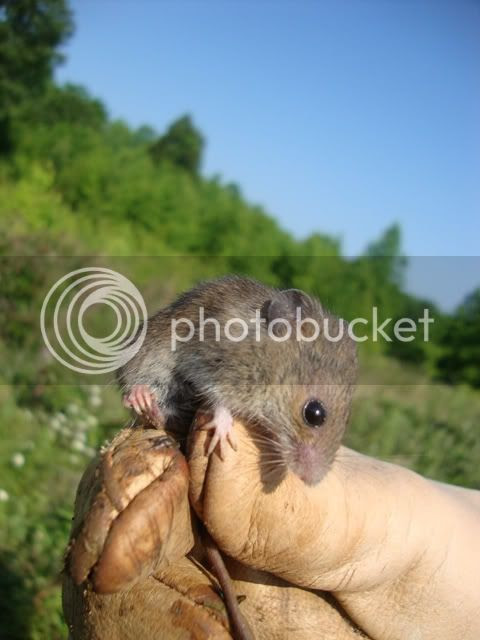 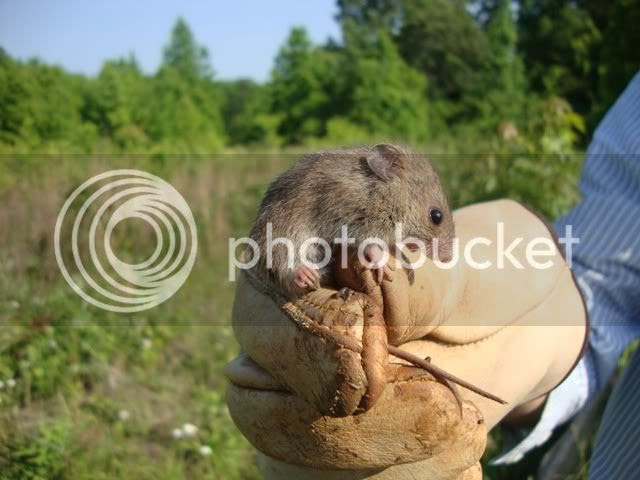 For comparison, here are two pictures of White-footed Mice captured in a drift fence (top) and a Sherman Trap (bottom) earlier this year. 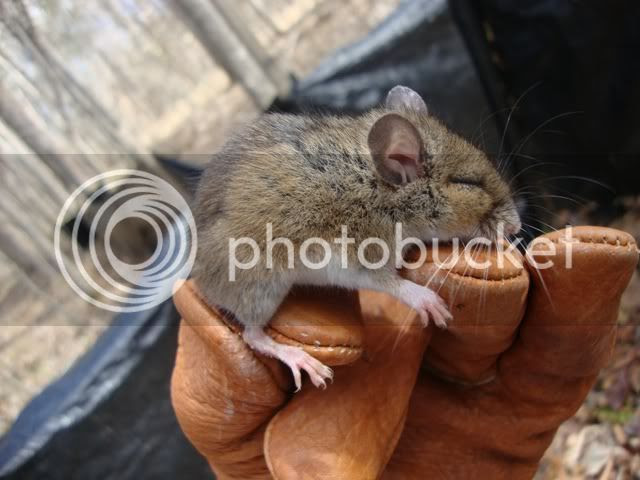 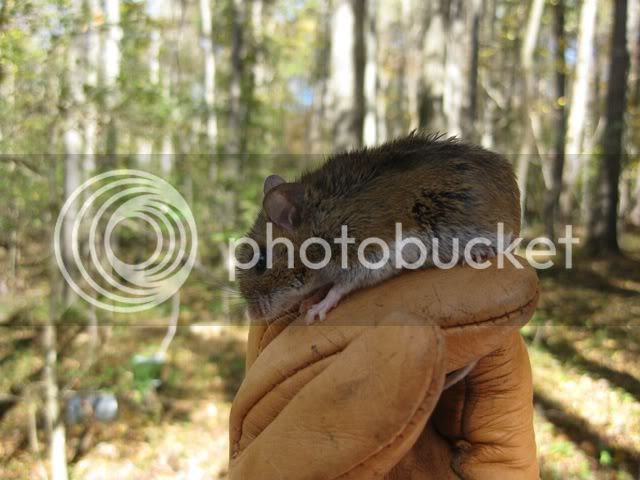 The ﻿Southern Two-Lined Salamander (Eurycea cirrigera) pictured below was a first-time capture at this site.  We'd found them in relatively high numbers at our other study site...but hadn't gotten them at this one yet.  Another lungless salamander of the family Plethodontidae, this rather delicate little critter is more often encountered near streams. In fact, the way we find them at our other site is by flipping flat rocks along a stream edge.  This fella was captured in our upland forest drift fence, which borders a rather dry pine stand.  Not where I expected to catch him. 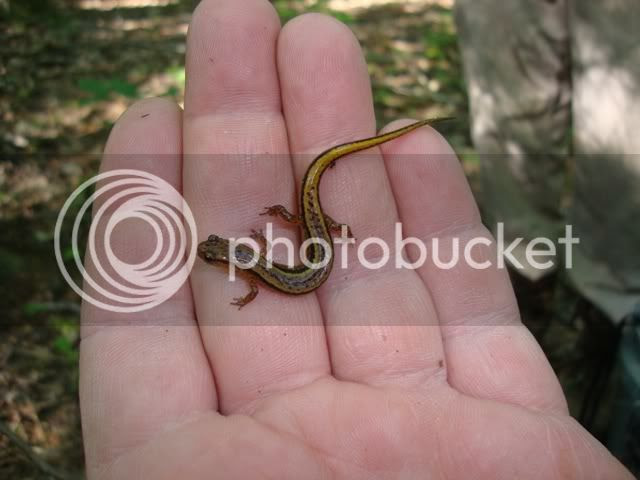 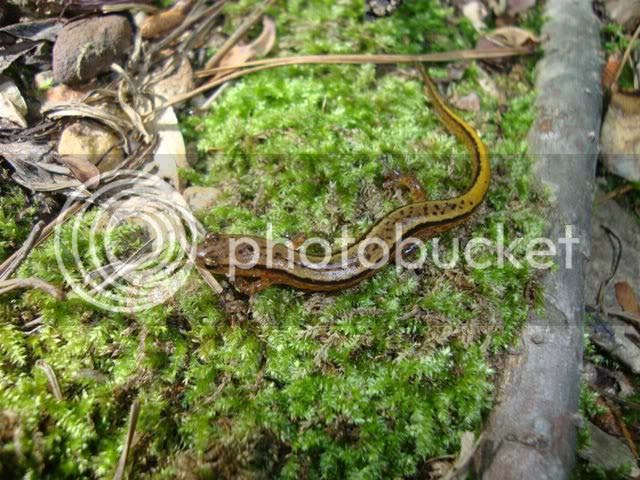 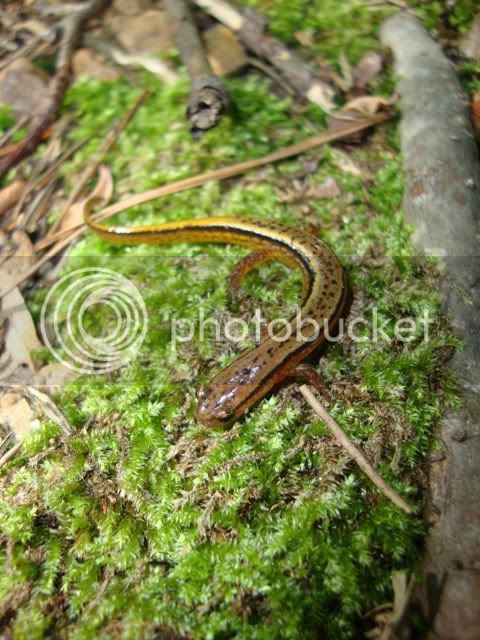 More to survey info will be posted in the coming weeks, I hope.
Have a good weekend!
Posted by Trailblazer at 8:52 AM