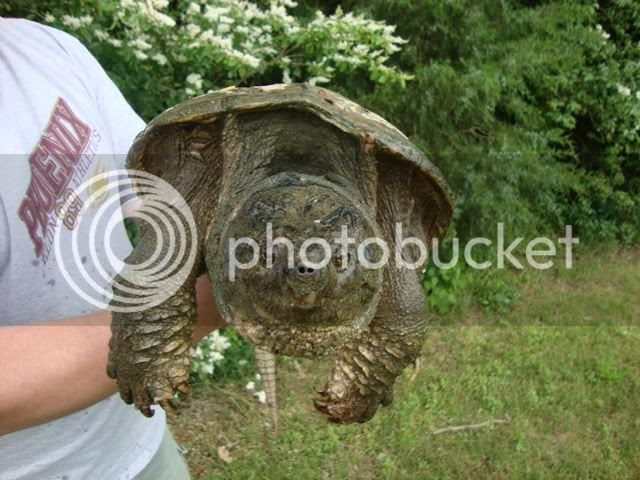 One of the University's physical plant employees is great.  He frequently brings me "stuff" that is found/caught on campus...in buildings....on the grounds....or in parking lots.  He's brought me several snakes, a little brown bat....and now a nice old Common Snapping Turtle (Chelydra serpentina serpentina).

I got a call today from him that he had picked up the beastie in a parking lot on Saturday, near one of the artificial water-retention ponds on campus.  It was generally heading away from this artificial pond and in the direction of a open field near a wooded wetland (also on campus...but across the parking lots and a small road).  We're just about in (or close to) the nesting season for female turtles....so I thought *maybe* this was a female making a migration up into the fields to lay eggs.  Snapping turtles rarely come completely out of the water for any reason, aside from nesting females.  They are big, cumbersome and somewhat vulnerable on land...so most snappers you see out of the water and walking around are usually females looking to lay eggs.  I had a couple of good undergraduate researchers with me at the time, and figured they'd like to see the critter.  So I told the physical plant employee, I'd come get the turtle and release it, if he wanted.

It's somewhat hard to release turtles that you catch migrating on land in a way that keeps them from crossing roads.  There's a natural desire to march them right back to the nearest wetland/pond and release them.  The problem is, they are up on land for a reason and moving away from water.  They probably wont give up on their migration, and you may find that the turtle trying to cross the road again later.  Most times, if you find them up and on the road...it's best to take them across the road in the direction they were heading when you found them.  That's where they want to be.

If our turtle was a female and heading to nest in the nearby sports fields, she'd have to cross the roads.  Because she was heading in that direction, I figured we'd release her on the opposite side of the road, so she didn't have to try and cross it.

We picked up the turtle...drove over to the parking lot and walked over to the edge of the open field (near the wooded wetland) and I prepared to take the turtle out of the tub she was in for the release.  I grabbed hold of the base of the tail with one hand and the base of a back leg with another.  The second I gripped the base of the tail and felt how thick it was....I second-guessed my hypothesis.  I pulled her out of the tub and it became pretty evident that "she" was actually a "he".

The big ol' feller had a long, thick tail-base neccessary for housing that most important of reproductive structures.  What the heck he was up on land for?....I'm not sure.  We had heavy rains on Friday/Saturday and perhaps he decided to make a move from one pond to the next (maybe one of the ponds was his winter/spring home, and the other was his summer home).

At any length, I hope I let him go in the right general area! 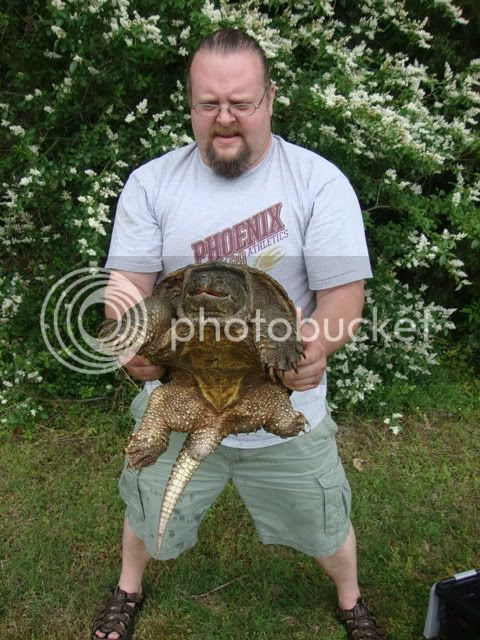 Above: the snapping turtle we released.  Note how long and thick the tail base is, up to the cloaca (that pore on the underside of the tail where the urine/feces and reproductive materials come from).  This indicates the turtle is male.
A note about holding snapping turtles.  Avoid handling them if at all possible, as their jaws can cause substantial damage.  Never get your hands near the head, or them by the front-legs, or front of the upper shell (the carapace).  Always grip the base of the tail and the base of one back leg (or the base of both back legs).  Never just lift the turtle by the tail, as the tail may dislocate.  It is possible to hold the turtle at the sides of the shell (as pictured above), but be VERY wary of their sharp claws as they thrash their legs about!  The neck is incredibly long and fast, and also capable of biting up and over the top of the shell, so be wary!
Posted by Trailblazer at 7:34 PM