So, I'm going to continue my series of posts regarding our captures during weekly surveys (so long as we actually continue to catch stuff).

Dave (the undergraduate researcher working with me this summer) and I have been busting our back-sides the last two weeks.

We start at 7 am every day because the heat has gotten brutal.  High of 97 degrees F this wednesday...and let me tell you that is NOT a dry heat.  We should probably start even earlier, but after field days in that brutal heat one just has a helluva time climbing outta bed earlier than 6 am to prepare for the day (I'm glad I don't study birds).

Mondays are the most work.  We deploy traps along the drift fences.  We do our weekly rounds to all the camera traps.  Finally, we track all our radio tagged box turtles (see The Turtle in the Box posted on February 23, 2011; and Up and About for Spring posted on May 10, 2011 posted here).  The rest of the week involves daily checking of drift fences and cover boards.  Last year we also Sherman trapped the area, but the results became predictable (always White-footed Mice, Peromyscus leucopus).  We catch plenty of Peromyscus in our drift fences, in addition to many other small mammals that we don't catch in Shermans.  This coupled with the tediousness associated with baiting and setting Sherman Traps lead us to discontinue it.

This week...however....we FINALLY got the turtle traps deployed for an official first run.  I'd thrown them in about a month ago and gotten nothing, but hadn't had the time to run them again since.  Now they are part of our circuit and we'll run them the rest of the summer (barring unforseen circumstance).

So, we bust our humps all morning.  On a good day we're done with field work by 10:30 am and beat the worst heat (by 11 am, you're looking at near mid/upper 80s and high humidity).  On bad days, we'll be out until nearly noon.  As an overweight male of germanic/irish descent....I'm usually completely drenched in sweat and stumbling around in fogged-up glasses by about 9 am.

The afternoons are spent inputting data, working on analyses and etc. until about 5 pm....then we call it a day.  This will be our schedule for the rest of the summer.

Anyhow, below is a picture of a location we've been trapping for turtles.  The river bed here is hard and rocky...so we've had to anchor the trap by fastening the hoops to cinder blocks with rope.  If we were trapping a pond or lake, we could probably just jam stakes through the hoops and into the soft sediment to secure the traps.  But we ain't so lucky this time. 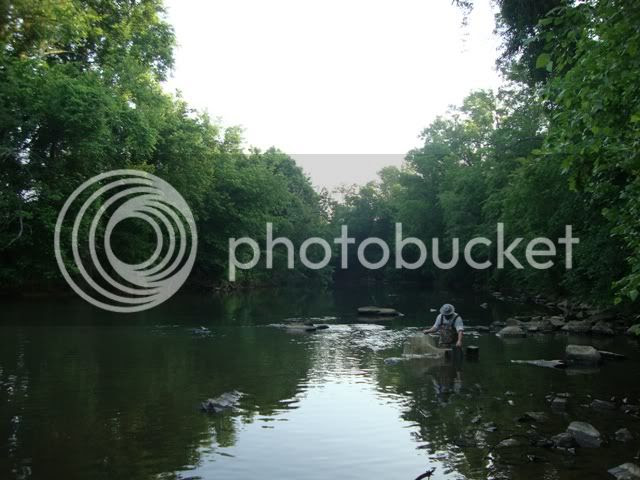 Unfortunately, we didn't get a picture of it.

Thought the location was pretty nice, though.

The White-spotted Slimy Salamander (Plethodon cylindraceus).  This isn't a rare find.  In fact, I've reported finding them in the drift fences already.  What makes this a particularly interesting capture was the fact that we caught a fully mature adult male (we usually get juveniles). 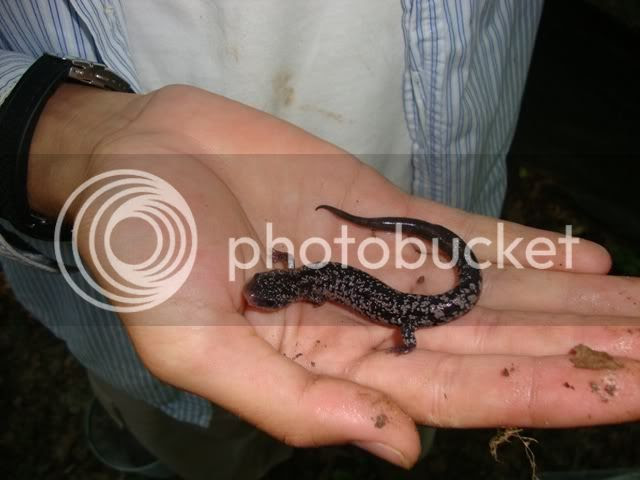 Adult males of many plethodon species have large mental glands under the chin (occassionally referred to as hedonic glands, so you can probably imagine what their function is).  What many may not realize is that salamanders can have very complicated courtship behaviors.  In many species, it's almost like a dance that they play out, where the female follows the male closely, rubbing her chin on the base of his tail, as they move together in circles (this is sometimes called the tail straddling walk).  It is during the tail straddling walk that the mental gland of the male comes into play.  The male will turn around periodically and slap the female on the nose with his mental gland.  Thus, it's believed that important olfactory cues, such as pheromones, are tranferred from male to female in this fashion.  The male then eventually deposits a spermatophore (i.e. packet of sperm) on the ground that the female walks over and picks up with her cloaca....and.....bingo!  Fertilization! 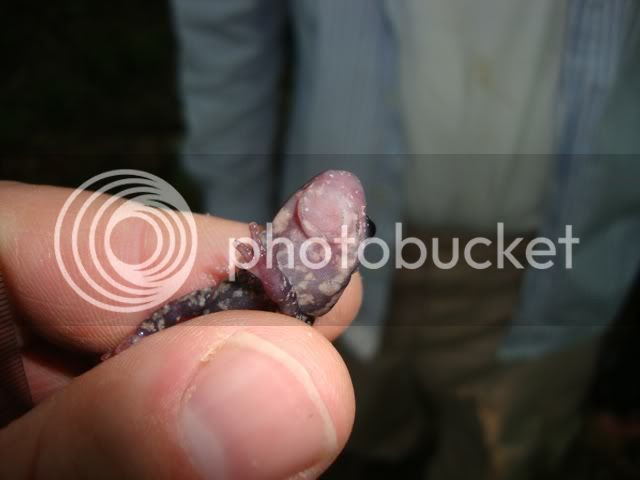 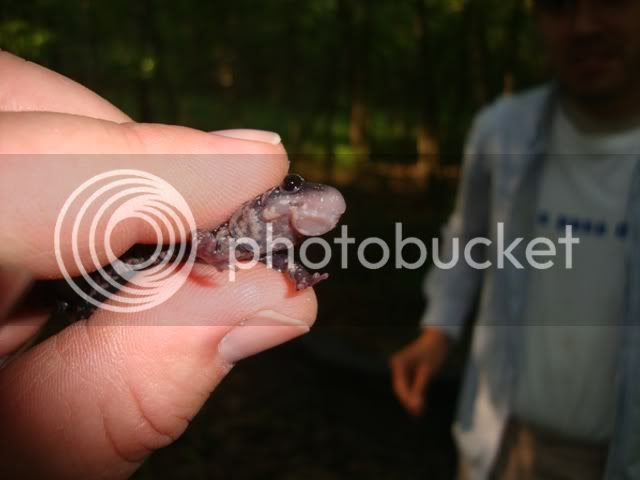 Above Two Pictures: the obvious mental gland on the chin of this adult male white-spotted slimy salamander.

The Black Widow (Latrodectus mactans): We found two large gals in their webs along the same drift fence this week.  Each time, I carefully transfered them on a stick to some location far away from the fence.  I'm sure other widows will move in to take their place.  As usual, they were completely unaggressive during the relocation process.  Yet, they still must be treated with a hefty dose of respect! 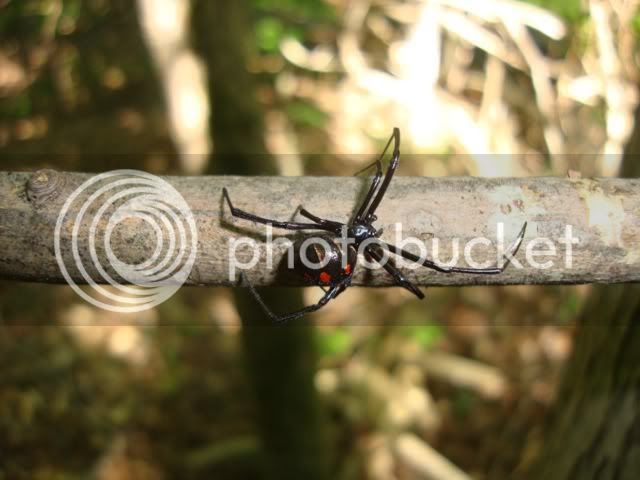 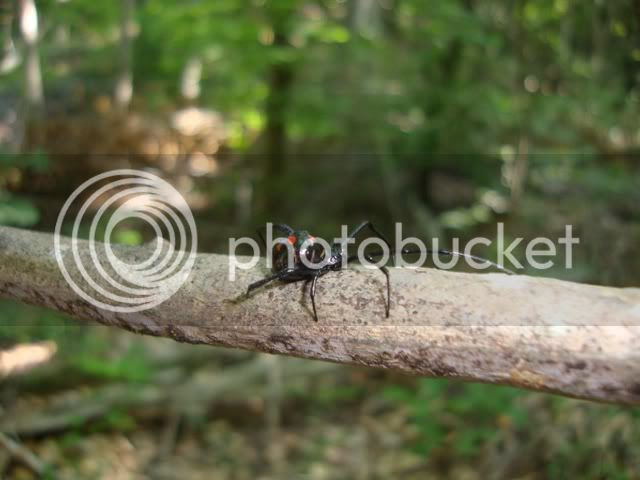 Above Two Pictures: one of the Black Widows that had set up shop along one of our drift fences this week.

Although we have two species of Short-tail Shrew in the state: The Southern Short-Tail (B. carolinensis) and the Northern Short-Tail (B. brevicauda), their ranges do not overlap (Webster et al. 2003, Mammals of the Carolinas, Virginia and Maryland). 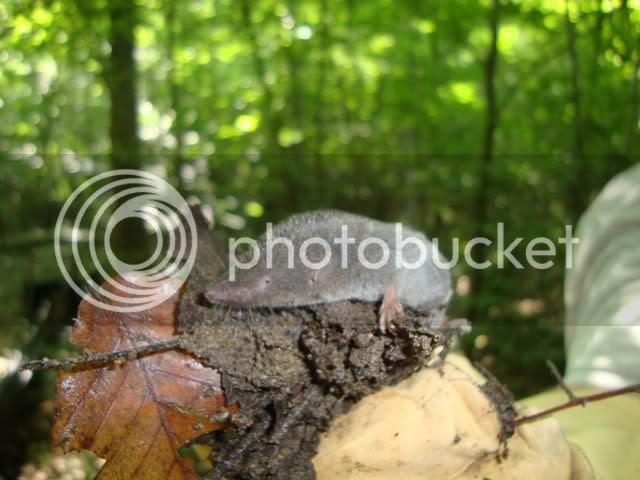 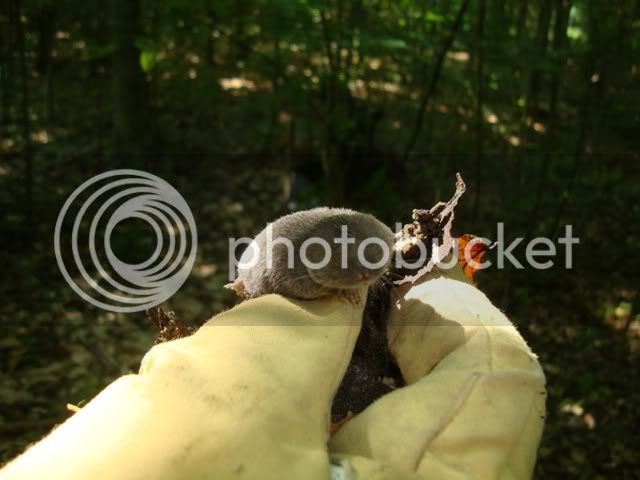 Above Two Pictures: Note the incredibly small eyes, but large whiskers.  As burrowing mammals, sight is less important than the tactile sensitivity that whiskers can provide when hunting soil invertebrates!
﻿ 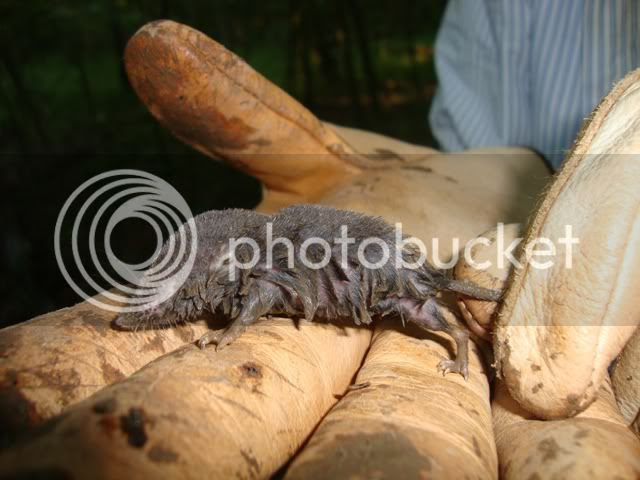 Above: a different individual that we captured.  Note the conical head shape of this species, which (in my opinion) separates them from other shrews, such as the Pygmy Shrew, which have more "elephantine" noses.  The short tail relative to body length is also a helpful clue.

As some of the only poisonous mammals species in the world, members of the Genus Blarina must be handled carefully.  They do not have a sophisticated venom-delivery system as do snakes of the Families Viperidae (vipers and pit-vipers) or Elapidae (cobras, kraits, mambas, etc.).  The toxins are in the saliva (according to George et al. 1986, the account published for the American Society of Mammalogists), and they have grooved teeth that allows it to flow into the bite wound more effectively.  This is somewhat similar to the venom-delivery system of Gila Monsters and Mexican Beaded Lizards, and I'm still up-in-the-air about whether this means they are considered "poisonous" or "venomous".  The toxins are reportedly both hemotoxic (destroys tissue) and neurotoxic (impairs neurological function), and function primarily to aid in prey capture.  It has also been suggested that, becuase they cause paralyses in their prey, these toxins may serve as a means by which Short-tails can cache (or save food) for later.  Their diet includes mostly invertebrates, such as earthworms and millipedes, but they will also eat vertebrates larger than they are, such as mice and voles.  It is believed that their toxic saliva allows for this.

The Common Gartersnake (Thamnophis sirtalis): The Common Gartersnake is probably one of (if not the) most widely distributed snakes in North America (Ernst and Ernst, 2003, Snakes of the United States and Canada).  It's geographic range includes the entire Eastern US, the Entire Midwestern US, a good portion of the Western US....while also reaching far into Canada from coast to coast. Aside from the more northern reaches of Canada, the only regions in North America that the Common Gartersnake is absent from are the hot/dry habitats of the southwestern US, and much of the Rocky Mountains (as far north as Wyoming and the southeastern corner of Montana).

Needless to say, I've spent alot of time with this species (both in WI and in the Southeastern US).  They are ecologically very similar here, as in the upper Midwest: liking damp habitats, but also grassland edges and even disturbed environments.  They are not as abundant down here as up there, but we still catch them often.

One difference I've noticed is that the Southeastern individuals are much quicker to slap a bite down on your finger.  Luckily they don't have much in the way of teeth...and it rarely breaks the skin. 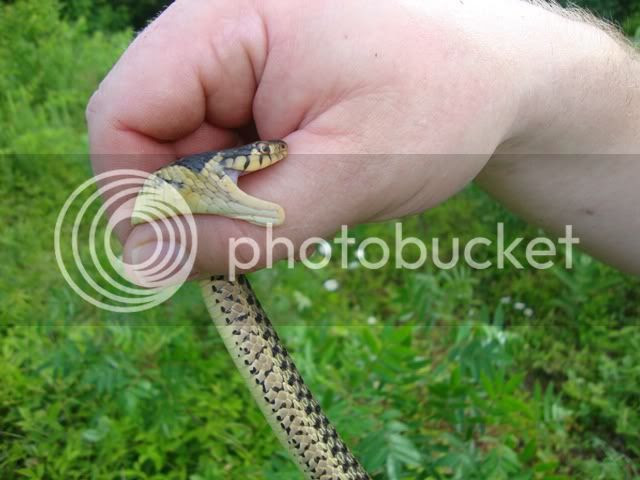 They also seem to have this very handsome checkerboard pattern more often (at least in my experience).  Nice looking snakes.﻿ 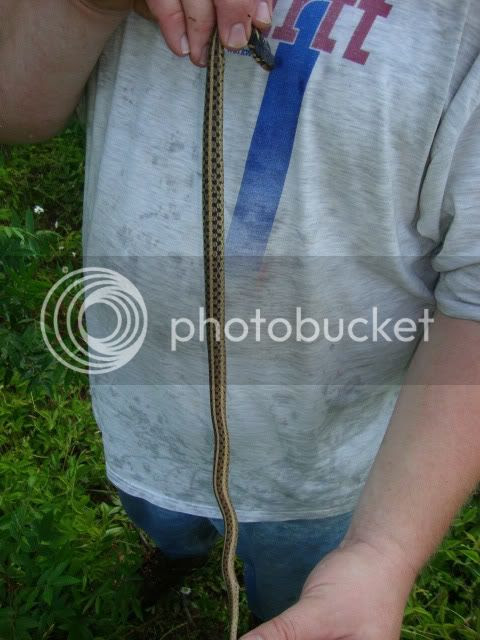 The above individual was captured in a grassland drift fence.  The one below, however, came from a lowland deciduous forest drift fence.  It was much bigger than the first snake. 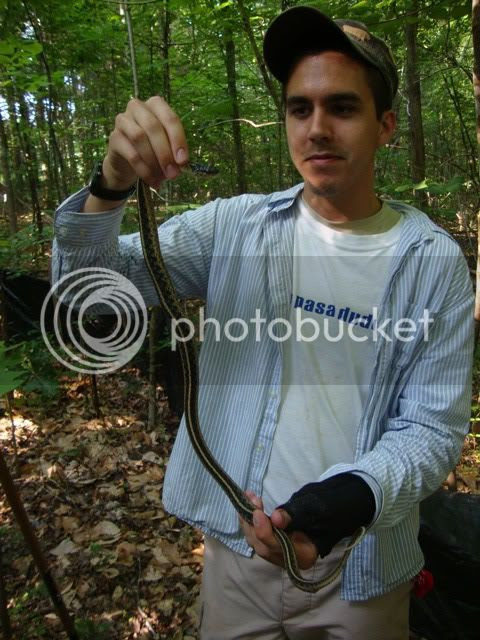 So...that's it for this week.  There will hopefully be more captures to report in the future.

Enjoy the weekend!
Posted by Trailblazer at 9:00 AM