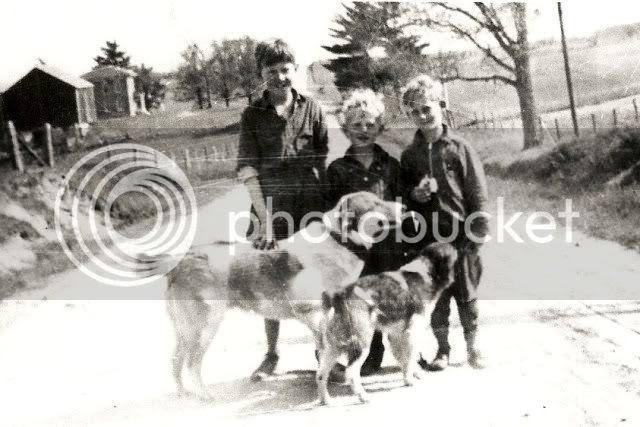 When I started this blog in January, I had never intended for it to become an outlet for personal information.  It was meant to be a means by which I could post stories and pictures of stuff I happened across when out in the woods for research and fun.

Those silly stories and pictures seem alittle trivial now.
Last week, I recieved a call from my dad, Michael (Max to anyone who knows him well).  My Uncle Bob (Bobby Lee Kapfer) had passed away the night before due to a blood clot in his lung.  He was 77 years old and living in Black River Falls, Wisconsin.  He had fought with one or two blood clots in recent weeks, but had managed to get through them.  In fact, it's my understanding that everyone thought he was more or less in the clear until the last clot showed itself.  It was this latest one...the one that formed in his lung..... that doctors could not seem to get rid of.

The picture at the top of this entry shows my dad's three brothers.  It was taken in 1940 on the family farm outside of Neillsville, Wisconsin.  My dad hadn't been born at the time this picture was taken, so he's not present. From left to right they are, my Uncle Bill (11 years old in the pic), my Unlce Dick (5 years old) and my Uncle Bob (7 years old and eating an apple).  Also pictured are their dogs at the time: Tarzan (the big one) and Prince (the little one).

I love this picture.  I remember it from my parent's house and asked them to send me a copy recently.


My uncle joined the Airforce at the start of the Korean War (around 1950).  He was 17 at the time, and my grandma (Elsie) and grandpa (Happy Lee) had to sign consent papers to allow him to enter.  My grandma later said it was one of the hardest things she had ever done.  I still can't imagine the nerve it must have taken a teenage boy to enlist in the armed forces with a war going on.  I know I don't have that kind of gumption...neither do most of the teenagers I've met in recent memory.

Uncle Bob went through basic training in San Antonio, and was a radio operator on a B29-Bomber.  He never went to the war in Korea, however.  Due to an ear infection, the Airforce "grounded" him (much to the relief of my grandparents, I'm sure).

He ended up being stationed in Topeka, Kansas, where he met and married my aunt (Mary Ellen) in 1953.  My Uncle Dick was the only member of the family who could make the wedding (grandparents had a working farm, Uncle Bill was working and my dad was a kid) and drove from Wisconsin to be the best man.  Eventually, after living in a few various places (I believe Albuquerque, NM at one time, and Wisconsin Rapids, Wisconsin) my Aunt and Uncle settled in Black River Fall, WI and had three kids (my cousins): Lynda, Ken and Chris.

Uncle Bob was an avid hunter and fisherman for most of his life.  He enjoyed the outdoors.  Although I never went hunting with he and my cousins....I think enjoying outdoor recreatiton must be in my family DNA. 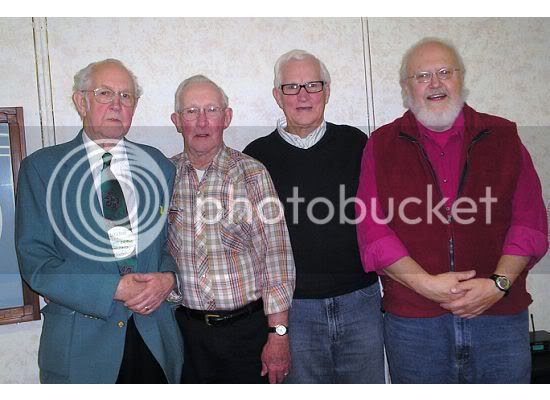 Above is a picture from last year (2010).  I believe it was taken at my Uncle Bob's birthday.  This picture shows the adult versions of those little tow-headed kids in the shot at the top of this entry, with the addition of my dad.  Left to right, they are: Uncle Bill, Uncle Bob, Uncle Dick, and Dad.

Although I saw them all frequently when I was a kid, I saw them less-often as I grew older.  Mostly this is because my time became consumed with the dumb crap that I thought was so important when I was in high school/college.  After college, my time became consumed with the responsibilities that come from adulthood........I wish that wasn't the case.

I could write about what a great guy he was.  But everyone who's reading this knows I wouldn't be posting about him if he wasn't.  I don't need to write out the full story about how (approximately 10 years ago), my cousin Chris and I took a top-heavy canoe out on a cool mid-October afternoon, with Uncle Bob fishing from the shore.  About how I dug in too deep with an oar in one stroke, snapped the oar and we flipped the canoe.  I don't need to tell you about how damn cold the water was, and how bogged down we were in our soaking wet sweatshirts and shoes while trying to swim the canoe to the other side of the lake....or about how Uncle Bob (who had been watching us from shore), drove his car around the lake, knocked on someone's door (I think he knew them, but not that well), asked if they would mind taking their pontoon boat out on the lake...and showed up just as we hauled our shivering, soaking butts out of the water onto a doc to pick us up.

If I started telling stories like that, you'd be reading all day.

It was after his passing that I, randomly, did an internet search...using his full name... and found very little.  In our overly digitized, computerized, and technical world....my Uncle barely existed.  His life is barely known about, outside of those who were related to him, his friends, or in the words of an obituary that will likely only be read by relatives and friends.  I found that particularly disturbing.  There are entire generations of individuals that may....some day...cease to be part of our cultural record because we have not kept track of them digitally.

Now, this wont happen to my Uncle Bob.  At least for as long as my blog lasts.  If someone searches for Bobby Lee Kapfer on Google, I hope something will show up and the people that read the entry will know about my uncle.
Posted by Trailblazer at 7:28 AM

Email ThisBlogThis!Share to TwitterShare to FacebookShare to Pinterest
Labels: Family